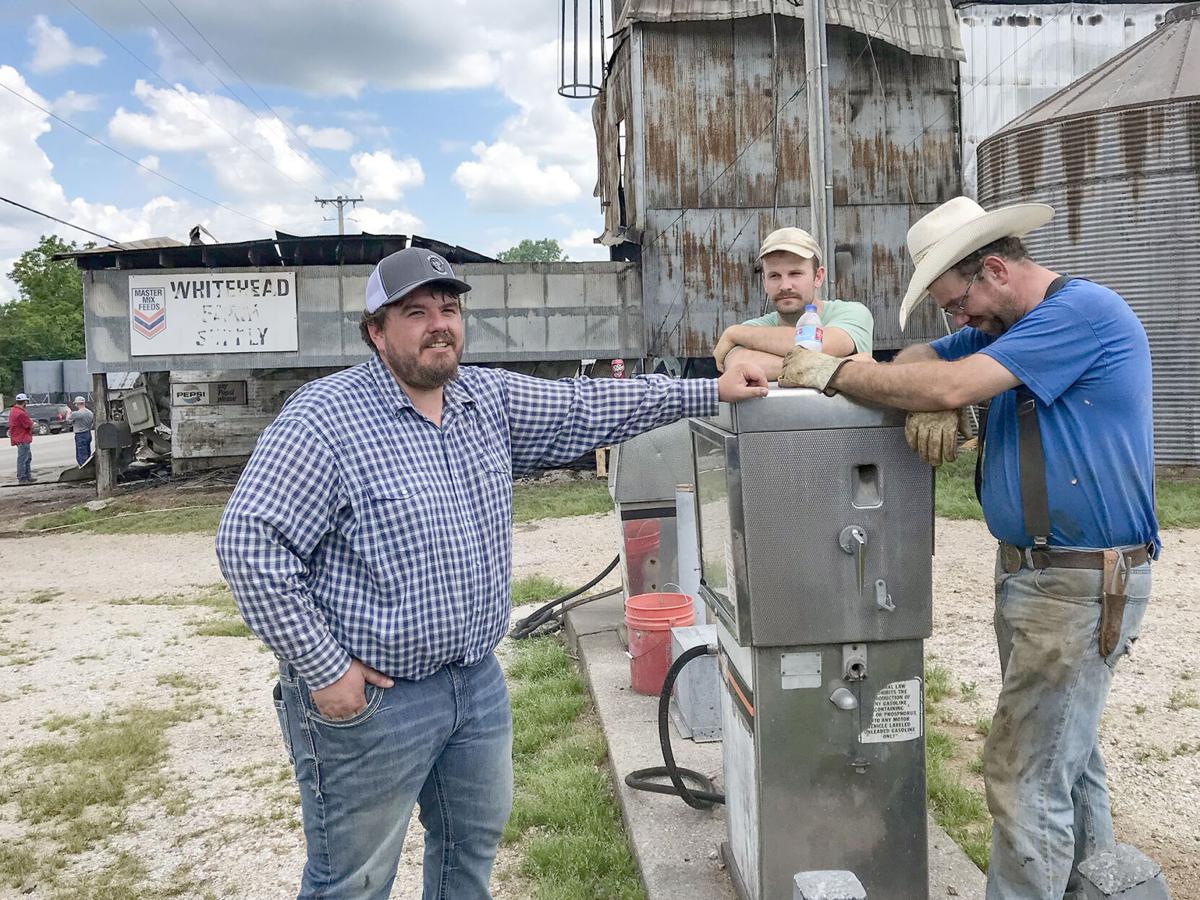 Owner Chris Chapman Jr. (left) and employees Colton Williams and Robert Welch (right) take a brief break from cleanup efforts at the Whitehead Farm Supply, a large part of which was destroyed by fire early Friday morning. Chapman said he and his insurance company are formulating a plan to rebuild the feed mill. In the meantime, he and his employees are working to restore temporary operations and hope to start making feed again soon. GLOBE | JOHN HACKER 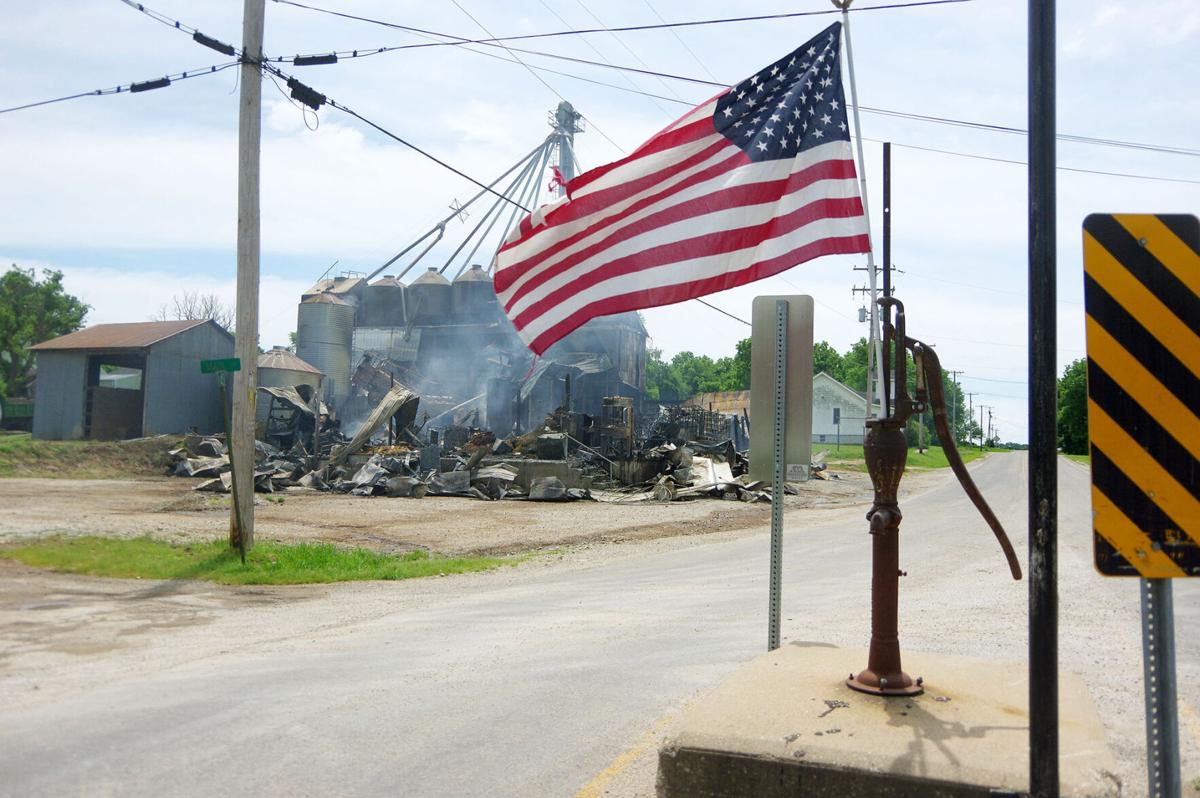 A flag flies Friday from La Russell’s landmark water pump in the middle of Main Street while the community’s other fixture, the Whitehead Farm Supply feed mill, smolders across the street. The mill was reduced to rubble by fire early Friday, but owner Chris Chapman already has plans in place to rebuild the only private business in the small town in eastern Jasper County. GLOBE | JOHN HACKER

Owner Chris Chapman Jr. (left) and employees Colton Williams and Robert Welch (right) take a brief break from cleanup efforts at the Whitehead Farm Supply, a large part of which was destroyed by fire early Friday morning. Chapman said he and his insurance company are formulating a plan to rebuild the feed mill. In the meantime, he and his employees are working to restore temporary operations and hope to start making feed again soon. GLOBE | JOHN HACKER

A flag flies Friday from La Russell’s landmark water pump in the middle of Main Street while the community’s other fixture, the Whitehead Farm Supply feed mill, smolders across the street. The mill was reduced to rubble by fire early Friday, but owner Chris Chapman already has plans in place to rebuild the only private business in the small town in eastern Jasper County. GLOBE | JOHN HACKER

LA RUSSELL, Mo. — The owner of the only business in La Russell, a community of 114 people in eastern Jasper County, said he will rebuild after a fire early Friday destroyed a big part of that business.

Chris Chapman Jr., owner of Whitehead Farm Supply, said he was shocked and devastated when he crossed the bridge over the Spring River and saw his feed mill burning in the distance. However, Chapman said the farm supply store, located across Main Street from the mill, is still open for business.

“We are open, and we have bag feed,” Chapman said as he surveyed the still-smoking wreckage of the 61-year-old feed mill Friday afternoon.

“The community’s been good to us,” Chapman said. “I’ve gotten literally hundreds of text messages and calls. We’re just trying to figure out if we can makeshift something, get these bins cleaned out and get to making feed for the community. That’s my No. 1 goal, to get the feed flowing again.”

Linda Heman, the last surviving child of the mill’s builder, said she was in tears watching from her front door a block from the mill as it burned.

“I woke up this morning, and I looked out the door to see my whole childhood going up in smoke,” Heman said. “It’s very sad when your family put all that into something and it’s gone. It’s silly to be that upset, but I am. My kids grew up going in there. People still talk to me about my parents and how they were so honest and how they were very fair to everybody. Terry and Freddie too, they were the same kind of people. They’re both gone now.”

Heman’s parents, Fred Whitehead Sr.and Erma Whitehead, built the mill in 1960 right after a big fire burned the town’s business district on the west side of Main Street across from the mill.

The couple ran it for more than two decades, then sold it to their son and his wife, Fred Whitehead Jr. and Terry Whitehead.

“He knew the town needed a business,” Heman said of her father. “He and my mom both worked in it, and then when they no longer could work, they sold it to my brother and his wife, who then sold it in January 2015 to the current owner. So it was in my family for 55 years.”

Dickie and Patty Lee, of Avilla, drove by to see the damage Friday afternoon.

Their son works at the mill and was busy helping to clean up.

“That building there has been here since I was a kid, and I’m 66 years old,” Dickie Lee said. “All the local farmers would come in here and play dominoes here. Chris Chapman, me and him worked together for years. We worked at Schreiber, and then he bought this business. All the locals buy feed here. It was a heart of the community. It’s kind of like that well there, that pump (in the middle of Main Street). It’s part of the history of La Russell.”

“When we were kids, the Saturday morning ritual was to load up our hay and grain and bring it to the La Russell feed mill to get it ground and bagged,” Endicott said. “We lived to come over here and get our soda pop and candy in this building. Fred Whitehead Sr. ran it for years, then Fred Whitehead Jr. picked up the ball and kept it going, and he ran it for another 30 or 40 years. It isn’t going to be the same without it, that’s for sure.”

Younger people said the mill had an impact on their lives as well.

Nate Everts and his daughter, Kylee Everts, 11, stopped by to talk to Chris Chapman and see the damage.

“Whenever I was little, I’d come in and there was the smell,” Kylee Everts said. “It always smelled like a feed store. You get used to it. I’m going to miss it.”

Nate Everts said he’s been a regular customer of the feed store.

“It holds the community together,” Nate Everts said. “This is a sickening sight. It’s been here my whole life. I’m 40 years old, and the feed mill was the place to go.”

In a post on its Facebook page, the Avilla Fire Department thanked firefighters from Carthage, Jasper, Sarcoxie, Golden City and Stotts City as well as the Mercy Carthage Ambulance Service for their help fighting the fire.

Even as he answered hundreds of text messages and phone calls from friends and business associates, Chapman said he was working to try to get his mill back up and running as soon as possible.

“We’ve got a mixer that we were going to install before,” Chapman said. “We had actually just poured concrete and stuff in the building, and we were going to put that new mixer in here, so we have it, and luckily it wasn’t in the fire. We’re going to build us a little building to the south and an unload auger and just use the half of the mill that’s good.

“We’ll put a roller mill in,” he said. “They’re ordering me one now. I just got off the phone for that. But we (will) get through this; we’ll build back. We have to build back. It’s all we’ve got, we’ve got no choice. This community needs it.”

In the meantime, Chapman said he put in an order from another local feed mill for more feed to provide for his customers.

All the grain and other ingredients stored in bins that are still standing after the fire will likely be smoke- or heat-damaged and have to be destroyed.

Chapman’s local insurance agents, Kevin Charleston and Phillip Solum from Specialty Risk Insurance in Carthage, were on scene with him for several hours working to get the claims process started, although an investigator would have to come from Texas.

Chapman said he had his emotional moment right after arriving on the scene.

“I cried and whined and cussed as much as I could for a couple of hours earlier this morning, then just decided it wasn’t worth it,” Chapman said. “These people know us and we know them, and it’s a lot of responsibility. All I can think about now is I’ve got to get feed made.”

Chris Chapman Jr., owner of Whitehead Farm Supply, said he got the call from the Avilla Fire Department about the fire at the feed mill shortly after 4 a.m. Friday. State fire investigators told him they didn’t know if they would be able to determine a cause of the fire because of the destruction.

Chapman said security camera video from a camera on his store across the street showed a flickering glow around a feed truck that had been used to deliver product the previous day. The glow flickered for about 20 minutes before flames appeared and eventually burned the mill.

“It was almost like if someone had driven by, they might have seen it,” Chapman said. “That’s not official, but it appears to me on the video it got started around the feed truck.”