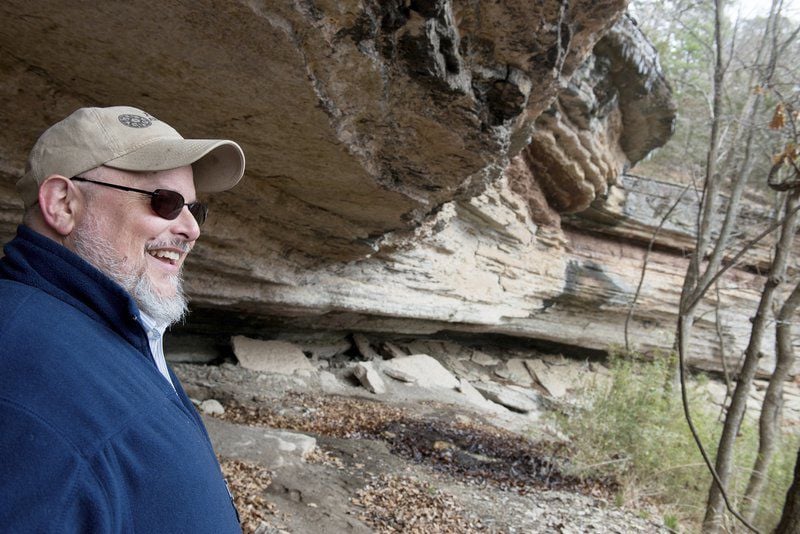 Jamie Brandon said bluffs such as Breckenridge are a resource to understand prehistoric Indians who lived in the Ozarks. Globe | Roger Nomer 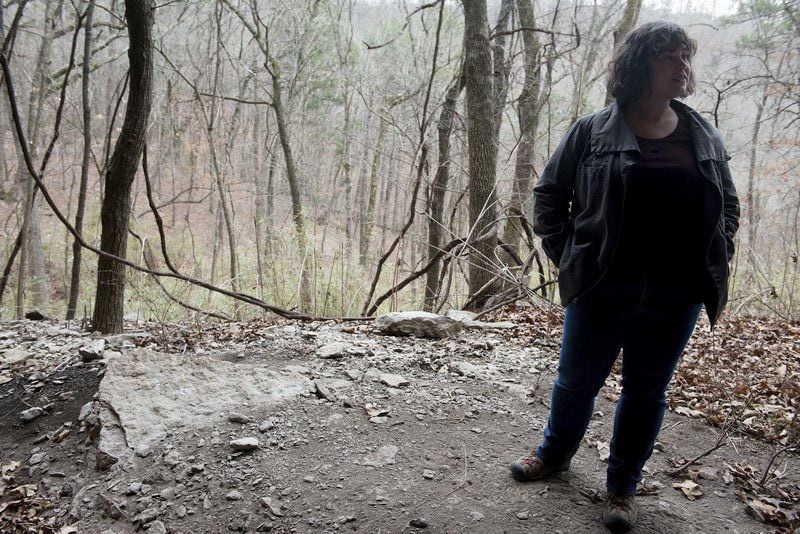 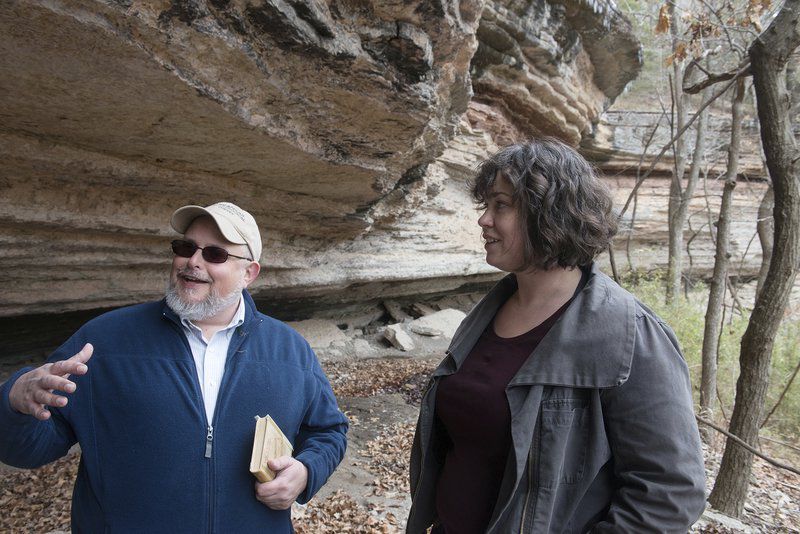 Jamie Brandon and Lydia Rees have launched a campaign to educate area residents on the importance of Ozark bluffs. Globe | Roger Nomer 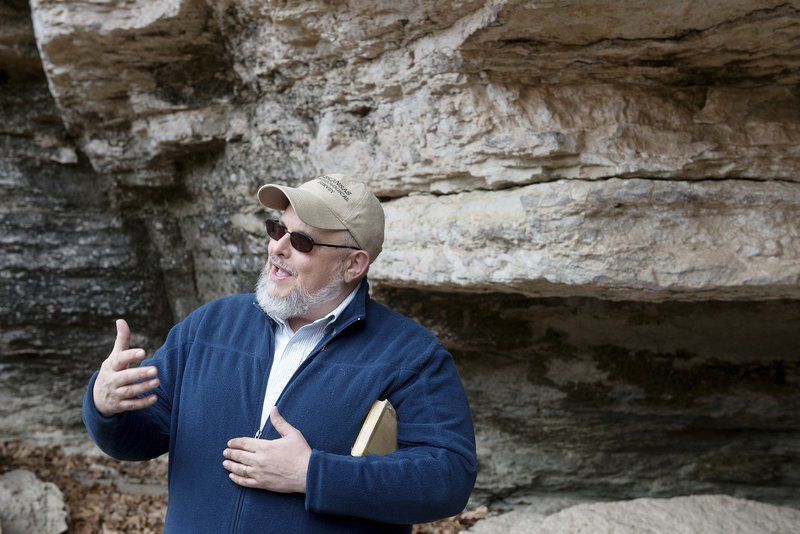 Jamie Brandon talks about the life of prehistoric Indians who used bluff shelters throughout the Ozarks. Globe | Roger Nomer 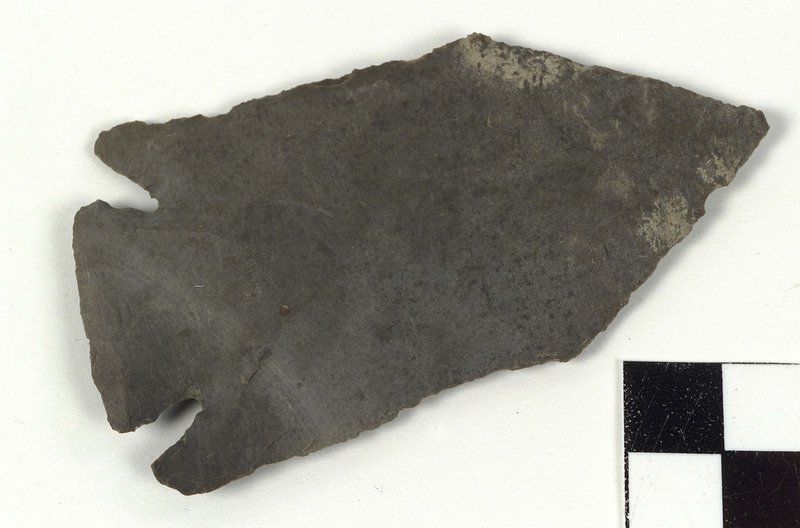 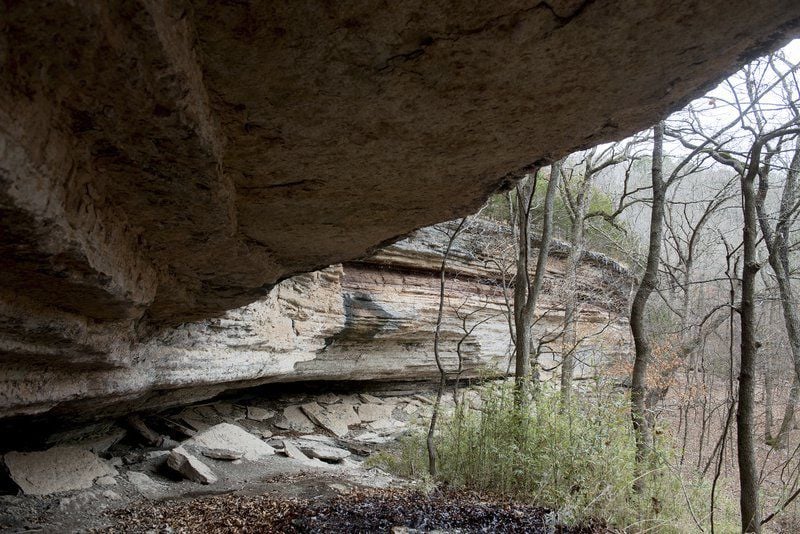 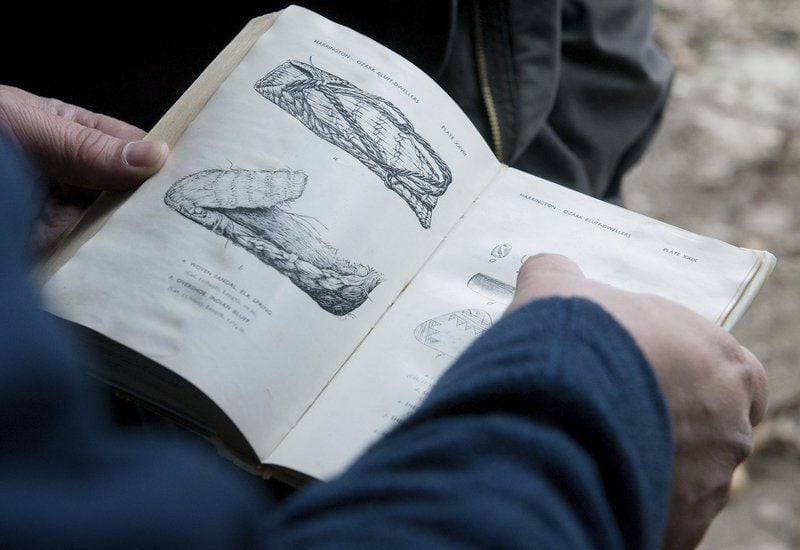 Jamie Brandon researches the work of Mark Harrington, who wrote one of the first books on the prehistoric Indians who used Ozark bluffs. Globe | Roger Nomer 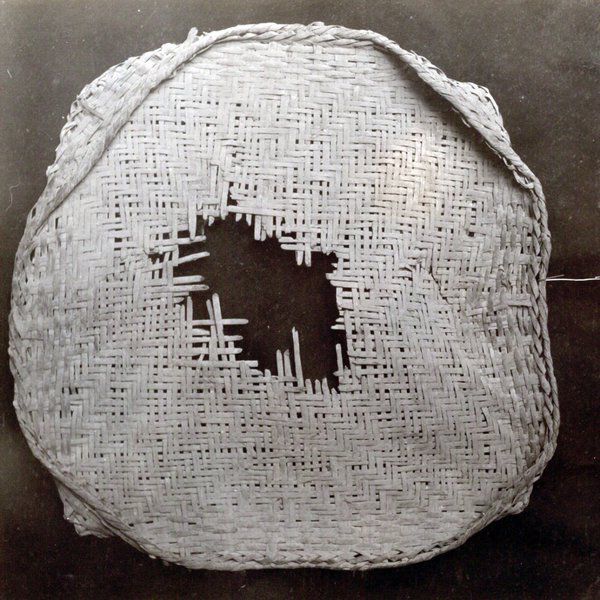 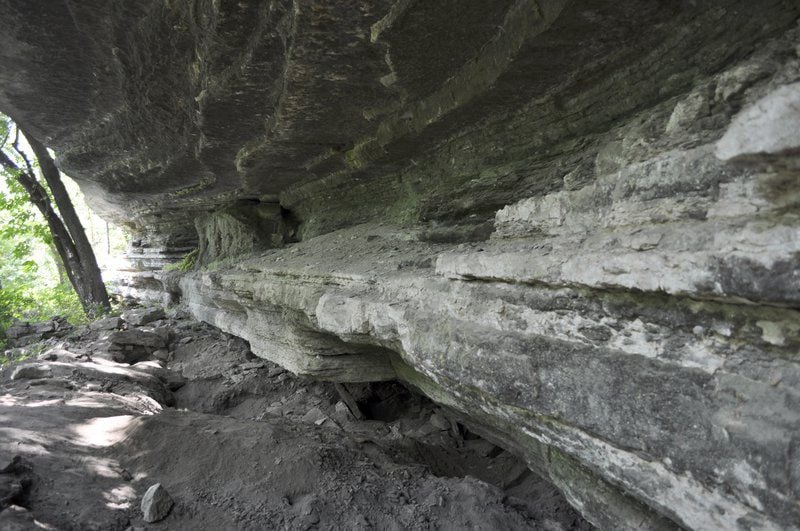 Looter holes such as these beneath a bluff shelter in Benton County, Arkansas, are causing damage to historic and sacred sites. Credit | Arkansas Archeological Survey 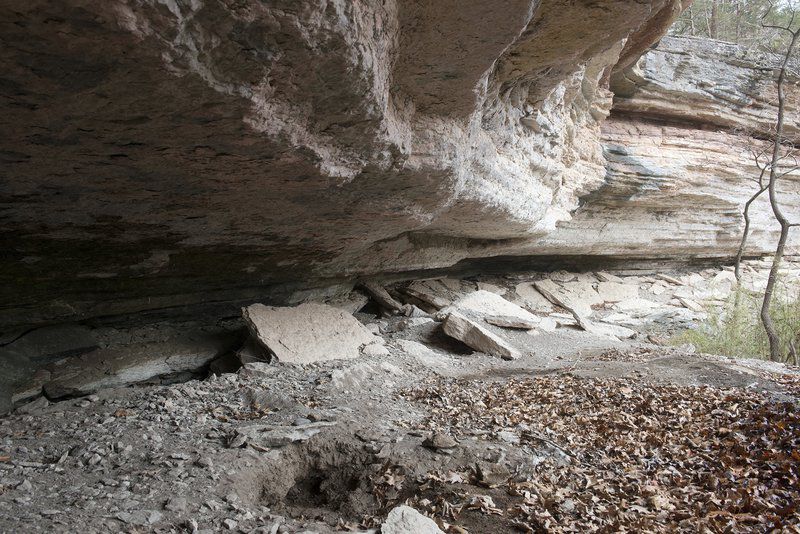 Breckenridge Bluff has been the focus of four archeological surveys over the past century. Globe | Roger Nomer 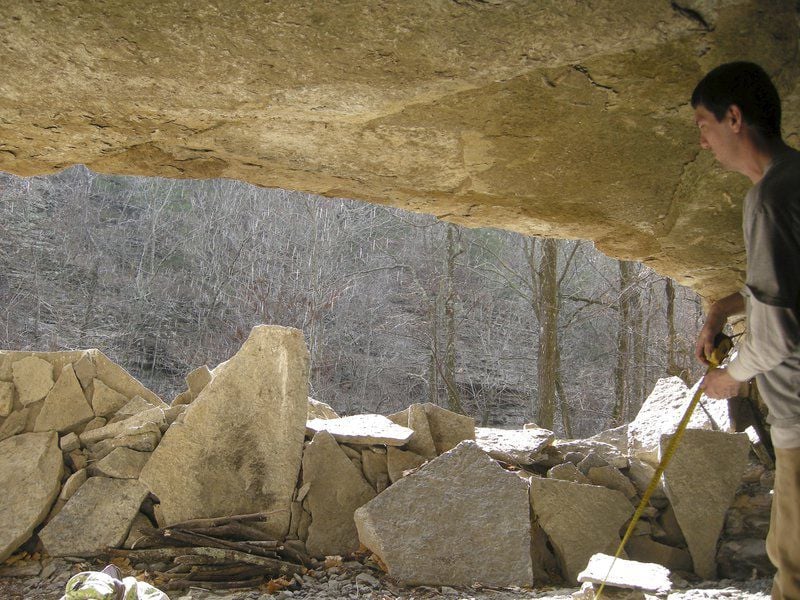 Shelters such as these in the Ozarks provide a dry environment that has helped preserve the material culture of prehistoric Indians. Credit | Arkansas Archeological Survey 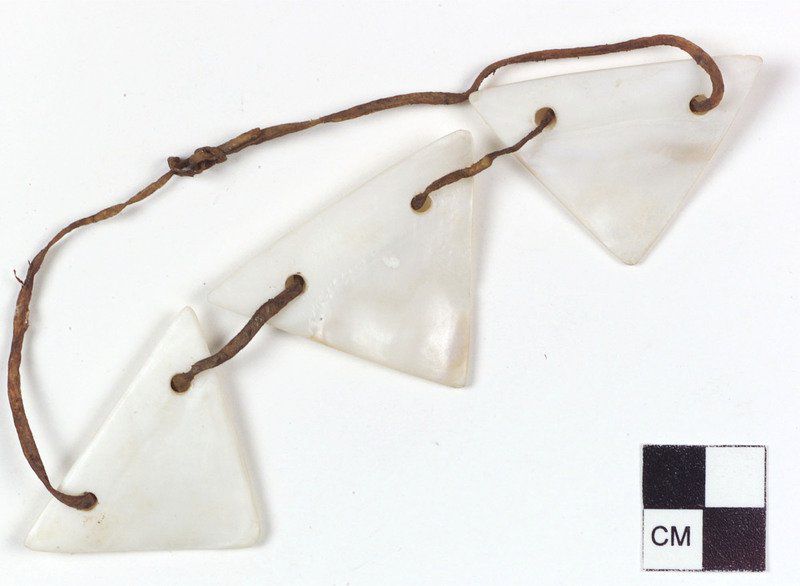 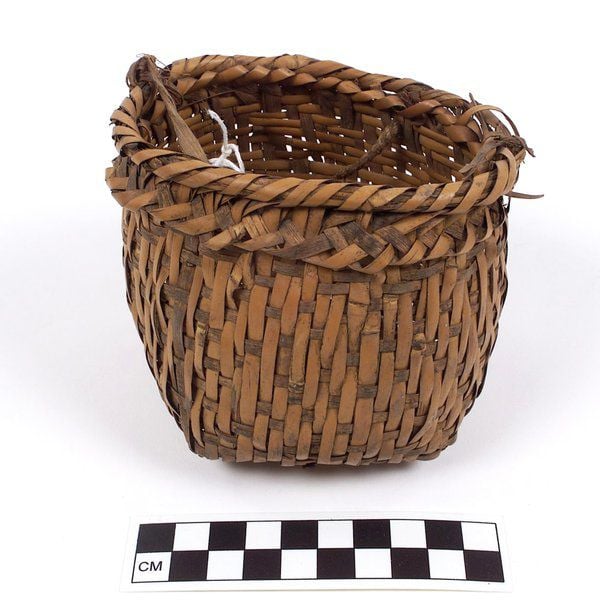 Breckenridge Bluff is today a protected site, but many other bluffs are vulnerable to looting and development, said Jamie Brandon. Globe | Roger Nomer

Jamie Brandon said bluffs such as Breckenridge are a resource to understand prehistoric Indians who lived in the Ozarks. Globe | Roger Nomer

Looter holes such as these beneath a bluff shelter in Benton County, Arkansas, are causing damage to historic and sacred sites. Credit | Arkansas Archeological Survey

Shelters such as these in the Ozarks provide a dry environment that has helped preserve the material culture of prehistoric Indians. Credit | Arkansas Archeological Survey

CARROLL COUNTY, Ark. — The corner of a large limestone boulder that broke away from Breckenridge Bluff untold millennia ago has been worn smooth by thousands of years of use. When Jim Rees sees that corner, he imagines an early American Indian, a thousand years ago, perched there, playing a handmade flute. The music drifts into the river valley below, its lonely notes evocative of a mourning dove.

Breckenridge Bluff, one of thousands of limestone and sandstone bluffs in the Ozarks that prehistoric Indians used for shelter, is also one of the bluffs that has revealed its story, pieced together from numerous artifacts and other information collected during four separate digs over the past century.

One of those artifacts — known as the Breckenridge Flute — was made from river cane and is considered the oldest known prototype of the modern Native American two-chambered flute. It was made more than 1,000 years ago.

Another — a chipped stone projectile made from chert that is one of a type called a Breckenridge Dalton Point — may date back nearly 10,000 years, the oldest object dated in the state of Arkansas.

In between is a story of life in the Ozarks as it unfolded over thousands of years.

"This is an historic place," Jamie Brandon, a research station archaeologist with the Arkansas Archeological Survey, said during a recent tour of Breckenridge Bluff.

It is evident why prehistoric Indians sought out places such as Breckenridge Bluff. A nearby spring and a pour-off that ran over the lip of the bluff provided steady sources of water. The afternoon sun warmed the rocks and provided protection from a winter wind. River cane grew in abundance on a nearby slope. And that boulder perch offered a view of the river valley below.

Although studied extensively, Breckenridge is not unique. Many Ozark bluffs offered shelter for prehistoric Indians, some of them for thousands of years. Some of these bluffs have been studied by archaeologists such as Brandon and Rees, but many more have not, and that is what has them concerned.

The fast-growing development of Northwest Arkansas and Southwest Missouri is one threat. Another is a unique breed of looter known as a "twigger" — meth addicts (tweakers) who are ravaging rock shelters and caves for anything of value, including ancient skeletal remains.

"The weird nexus between looting and meth has been noted by experts for several years, especially in the Pacific Northwest. Today, these shady characters are leaving their footprints in America's heartland," according to a new website, Bluff Shelters of the Arkansas Ozarks, that went online last November.

Archaeologists have launched the website to educate the public as well as promote protection of bluff shelters.

"The website is a first step in what we hope is a long-term project to understand the bluff shelters throughout the Ozarks," Brandon said.

Brandon and his wife, Lydia Rees (daughter of Jim Rees), have also been traveling the region to explain the importance of the shelters.

"We've been doing a lot of barnstorming giving these talks all over the Ozarks," Brandon said.

They are not the first to advocate on behalf of Ozark bluffs.

Nearly a century ago, Mark Harrington arrived in Southwest Missouri. He was the first serious and trained archaeologist to follow up on reports of artifacts as well as prehistoric Indian remains discovered at many bluff sites.

Early settlers often knew about these bluffs, having used them also for shelter and storage. One of those who appreciated the historic significance of what was found at bluff shelters was W.C. Barnard, a Seneca, Missouri, doctor who had moved to the area in the early 1890s. His collection of Native American artifacts included contemporary pieces from tribes that had been relocated to Oklahoma, but other pieces dated back thousands of years and some came from the nearby bluff shelters.

Barnard was famous in the region for his collection, which contained hundreds of thousands of pieces, ranging from projectile points to headdresses. His collection included a shell-and-sinew necklace made perhaps 3,000 years ago and found at a bluff shelter in Benton County, Arkansas. Much of Barnard's collection (he died in 1945) ended up in the National Museum of the American Indian, part of the Smithsonian Institution in Washington, D.C.

Harrington had known about Barnard, whom he described as an "indefatigable collector," since 1908, and he had first explored rock shelters along the Grand River in Northeast Oklahoma on a visit to the area in 1914. In 1922, he returned, and although Barnard was invited along he was unable to go. Harrington and his expedition would survey a number of bluffs in Southwest Missouri and Northwest Arkansas. Many of Harrington's pieces also ended up at museums, including the Smithsonian.

The first few bluffs ended in what Harrington called "fruitless examination," but at Breckenridge Bluff they found two grass-lined storage pits, "a phenomenon new to us but which later became familiar to us as one of the characteristic features of bluff dwellers." At the bottom they found a cane basket and concluded the pit had been used to store corn. They also found in the shelter spear points and rock scrapers, shell knives and shell jewelry, a hammerstone and a bone awl. They found cane basketry, part of a cane arrow, a fragment of a cane flute, scraps of buckskin and fiber twine, and more, including part of an infant's skeleton.

At other bluff sites, items of clothing and shoes made from animal skins and grass had been preserved.

Pottery and shards also have been found at bluff sites but have not been studied as much as the organic material, but that will be a focus of Lydia Rees' research.

"Many of these (bluffs) are very dry. Because of that, preservation of ephemeral material is very good," said Jim Rees, referring to textiles, baskets and more found at these bluff sites. Jim Rees, of Fayetteville, is a former vice president of the Arkansas Archeological Society.

Jim Rees said some of the bluffs have "an amazing amount of cultural material. That is what makes them so valuable to archaeologists."

"It is quite a treasure trove," he added.

These scientists say it's important that each object found at a site be seen in context so that in can be properly interpreted and dated, but that context can be destroyed by looting or development even if the object itself is preserved.

In the case of the stone Dalton point, found during a dig in 2014, Brandon said it would be impossible to date except for the fact that it was found in a hearth beneath a slab of rock that had fallen from the roof, and the hearth had other objects that could be dated, including charcoal. That allowed the scientists to date the Breckenridge Dalton Point to about to 9,765 to 9,555 years old.

"Everything is about context," said Brandon, who called the stone projectile point the "oldest dateable artifact from the state of Arkansas."

Although Harrington had been to Breckenridge Bluff in the 1920s, it was a subsequent dig a decade later, this one led by Samuel Dellinger out of the University of Arkansas, that found the flute as well as part of an arrow also made from river cane.

Though fragile, the flute had survived and, according to Jim Rees, remained in a box at the University of Arkansas for nearly 80 years before he saw it and realized what it was. In fact, it is just one of a number of musical instruments collected from Ozark bluffs in Arkansas and Missouri, including bluffs along Elk River.

The flute has two chambers — a flow-air and a sound chamber — said Jim Rees, adding, "It was made that way because that is the way the cane grew."

"It is the oldest example of a two-chambered flute," Jim Rees said. "This is the prototype of the modern Native American flute."

A few years ago, Jim Rees and Devin Pettigrew, an undergraduate assistant at the Arkansas Archeological Survey, crafted two reproductions of the Breckenridge Flute. Although part of the original was missing, Rees said, "I think we're pretty close to what the original was like."

They sent it to Clint Goss, in Connecticut, a leading authority on both the history and playing of Native American flutes, who sent them back several recordings of songs, giving them a chance to not only feel and see the 1,000-year-old instrument, but to hear what it might have sounded like when played by prehistoric Indians.

While the bluffs were used for thousands of years, Brandon and Jim Rees said they were not used year around. They were used at different times of the year, and used to preserve things such as seeds, which archaeologists can use not only to determine what prehistoric Indians were using as a food source, but also to understand the evolution of farming along river valleys. They also can use them to determine how climate changed through the millennia, with periods that were wetter and colder, and warmer and drier.

The bluffs also had another important use for early Native Americans.

"They also used them as kind of like mausoleums. They would put their dead there," Jim Rees said. "It had to do with the fact these sites were associated with their ancestors."

Some of the burials in bluff shelters also show evidence of funerals, with the dead carried via cedar poles and woven mats that were left with them in the burial chambers.

And because of that, the sites also are sacred to modern Native Americans who want to see their ancestors' remains respected and protected, and that is why the tribes today are consulted on archaeological work. That is another reason the archaeologists don't want to see the sites disturbed by development or looting.

Today, with nearly 1,000 people a month moving into Northwest Arkansas, with other threats, Arkansas has included bluff shelter sites on its list of "most endangered places," which means Brandon and Lydia Rees are kept on the run to both educate the public and protect the sites.

The University of Arkansas will hold a tour and open house of its museum collection from 7 to 8:30 p.m. Thursday, March 30, at the Arkansas Archeological Survey building, located off Garland Avenue in Fayetteville, across from the Pauline Whittaker Animal Science Center. It will include the Breckenridge Dalton Point and the Breckenridge Flute.