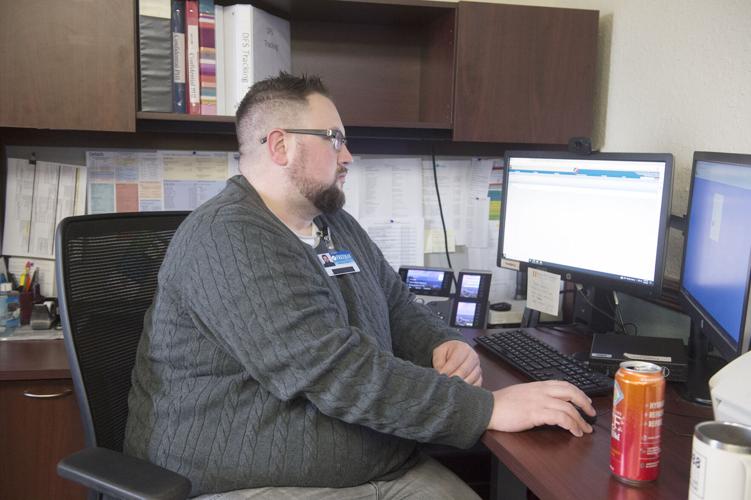 Cody Bohall works at Ozark Center’s 988 call center in Joplin on Jan. 13. “My experience has been that a crisis is anything that is deemed a crisis by that person, so it can be anything from drug issues to breakups.” GLOBE | ROGER NOMER 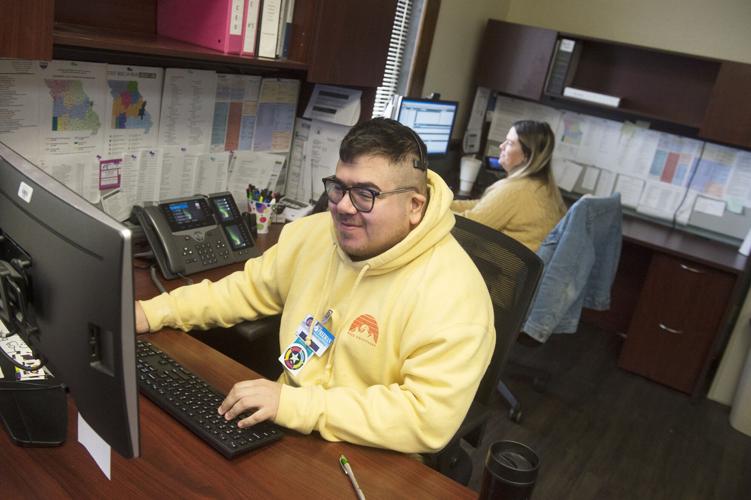 Joseph Morales and Jessie Sartin work at Ozark Center’s 988 call center. Center administrators say the employees want to provide hope when people need it most and that they know that a crisis can look different for everyone. GLOBE | ROGER NOMER 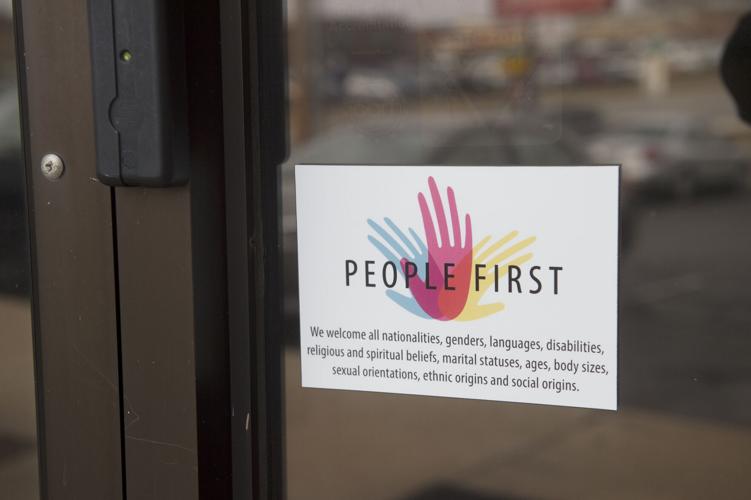 Ozark Center officials say the staff at the 988 call center in Joplin is diverse, to help a wide range of people for a wide range of issues, as noted by the all inclusive notice on the door. GLOBE | ROGER NOMER

Cody Bohall works at Ozark Center’s 988 call center in Joplin on Jan. 13. “My experience has been that a crisis is anything that is deemed a crisis by that person, so it can be anything from drug issues to breakups.” GLOBE | ROGER NOMER

Joseph Morales and Jessie Sartin work at Ozark Center’s 988 call center. Center administrators say the employees want to provide hope when people need it most and that they know that a crisis can look different for everyone. GLOBE | ROGER NOMER

Ozark Center officials say the staff at the 988 call center in Joplin is diverse, to help a wide range of people for a wide range of issues, as noted by the all inclusive notice on the door. GLOBE | ROGER NOMER

Aside from the emergency number 911, another lifesaving number that you may want to memorize is 988.

The number, 988, can be used anywhere in the United States for individuals experiencing suicidal, substance use and other mental health crises. The free, 24/7 lifeline allows users to confidentially talk to a crisis specialist or chat with them online at 988lifeline.org.

The National Suicide Hotline Designation Act, signed into law after the passage of bipartisan legislation in 2020, authorized 988 as a new number for suicide and mental health crisis.

When the around-the-clock service launched last summer, it built on the existing network that staffed the old national lifeline, 1-800-273-8255. The new 988 number is designed to be as easy to remember as 911.

The 988 Suicide & Crisis Lifeline is a network of more than 200 state and local call centers supported by the U.S. Department of Health and Human Services through the Substance Abuse and Mental Health Services Administration.

It couldn’t have come at a more needed time: Depression rates in U.S. adults, overdose deaths and suicide rates have been on the rise.

The U.S. had one death by suicide every 11 minutes in 2020, according to the Centers for Disease Control and Prevention. Suicide was the second leading cause of death for young people ages 10-14 and 25-34. Studies have shown that after speaking with a trained crisis counselor, most Lifeline callers are significantly more likely to feel less depressed, less suicidal, less overwhelmed and more hopeful.

“The call volume is, in some instances, well beyond what we anticipated,” Miriam Delphin-Rittmon, assistant secretary for mental health and substance use in the Department of Health and Human Services, said in a statement. “It does let us know that people are struggling, people are having a hard time. Where I feel heartened is that people are getting connected to services and supports, as opposed to struggling on their own.”

Ozark Center, an arm of Freeman Health System, is one of six Lifeline call centers in the state of Missouri. Since Ozark Center began answering calls in July 2022, they’ve made 502 face-to-face contacts and had 4,654 hotline calls, as of Jan. 12.

“If the other five call centers are busy, and the call doesn’t get answered in so many seconds, then it will roll over to the backup center,” said Debbie Fitzgerald, director of crisis services at Ozark Center. “We have been the only Missouri 988 call center that has had three months where we answered 100% of our 988 calls, which means none of them had to be bumped to the backup center. We’re really proud of that, and how we’ve adequately staffed up in order to accommodate the increase.”

Fitzgerald said there have been some months where they’ve seen the call volume increase by over 50% since transitioning to the 988 number in 2022. Ozark Center received 444 calls, or 98.7 calls per monthly average, from July 16 to Nov. 30 last year.

“With 988, it has allowed us to increase our staff, upgrade and improve our technology and provide extra training,” said Fitzgerald. “They were already highly trained, but now we’ve received even more training.”

Fitzgerald said the second facet of the 988 Lifeline is mobile crisis response. This can be requested by individuals or families who would rather be seen face-to-face or can’t have their situation resolved over the phone. Crisis specialists ask a certain set of questions before deploying a mobile team.

“We have staff who are on-call who then go mobile within the community,” said Fitzgerald. “They go to people’s homes, schools, businesses, churches, universities or colleges, doctor’s offices, as well as city and county jails. Sometimes, people may not feel comfortable having counselors come to their home, and they can be asked to meet in a public place like a McDonald’s or the library. The whole idea of mobile crisis response is to go to where the person is during the time of the call and try to support that in their natural environment. Not everyone needs a mobile crisis response, but it’s available. There is no charge for that.”

The 988 Suicide and Crisis Lifeline has also increased collaboration between crisis centers in the state through an online portal. MOConnect is a platform that identifies, unifies, and tracks all mental health and substance use disorder residential and outpatient treatment resources in a single network.

Ozark Center served as the pilot site for MOConnect, which Fitzgerald has described as a success.

“We can go into that platform, and click to see any mobile crisis counselors who are available, and we can page them out through this portal,” said Fitzgerald. “You can tell who’s closest to the individual. It has increased the speed of response, if you’re in need of a mobile crisis specialist. It doesn’t require a lot of call transfers. Some centers are now in the process of launching it, so everyone should be connected very quickly.”

Also as part of the 988 Suicide and Crisis Lifeline, Ozark Center will be working with Jasper County Emergency Services 911 to help respond to behavioral health-related calls. Mental health crisis calls may result in potentially dangerous and traumatizing outcomes when police are called, especially in historically marginalized communities, according to Mental Health America.

“All 911 call centers receive a percentage of calls that would be better served at a 988 or a crisis line call center,” said Fitzgerald. “They don’t need law enforcement because there’s not a crime or a safety issue. The person is in duress and needs help. We’re partnering with them, and they’re going to have us observe their call center and also provide us with training. We’re hoping that the JASCO 911 call center will be able to transfer individuals in crisis to us, and we handle the call and dispatch versus sending out an officer.”

Fitzgerald said the 988 Lifeline can be used by people in suicidal crisis or mental health-related distress. Some common reasons why people call include utility assistance, food insecurity and help with prescription costs.

“We can advocate to people who are struggling and make referrals to community agencies because it’s an important part of being a healthy individual,” said Fitzgerald. “The mind and the body are connected, and if you’re not eating well or getting good medical care, then it’s going to pull your emotional health down, as well. It’s not just that you have thoughts of suicide or self-harm. However, we are well prepared to handle that.”

Fitzgerald said they want to provide hope when people need it most and that a crisis can look different for everyone.

“My experience has been that a crisis is anything that is deemed a crisis by that person, so it can be anything from drug issues to breakups,” he said. “You learn how to help guide them to the right path that they need to overcome their issue.”

Bohall said it’s rewarding to help out people in the community, and he’s enjoyed the opportunity to give back to those who need it most.

“I like to help people understand the beauty of life,” he said.

Kimberly Barker is a news reporter for The Globe who covers Northeast Oklahoma, Southeast Kansas, as well as Carl Junction, Carthage and Webb City. She can be reached by email at kbarker@joplinglobe.com or by calling 417-627-7364.

Would you vote for a 3% sales tax on recreational marijuana sales in Joplin?