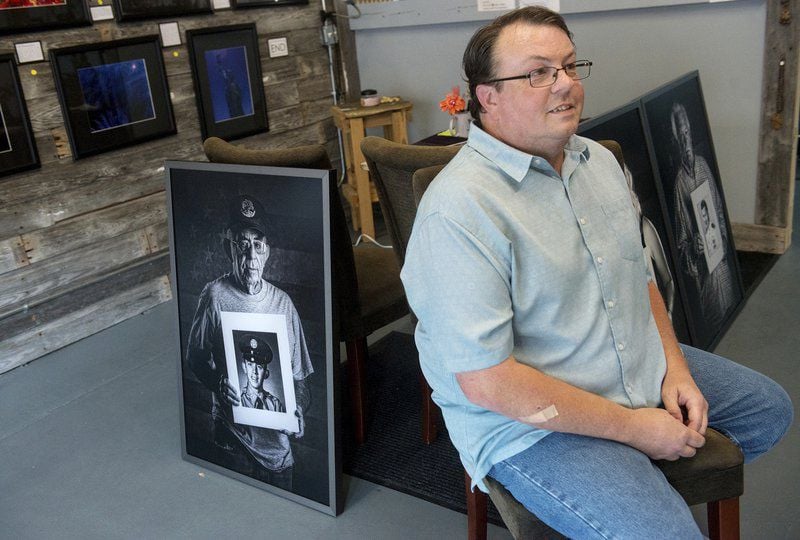 Steve Snyder talks about his "Freedom Endeavor" exhibit on display at the Urban Art Gallery in downtown Joplin. The photograph in the exhibit is an image of a retired military member holding a picture of him- or herself in uniform. GLOBE | ROGER NOMER 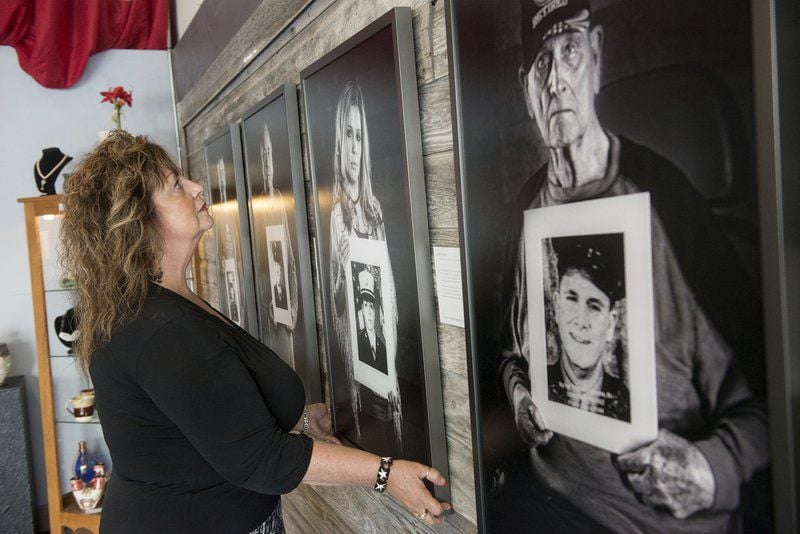 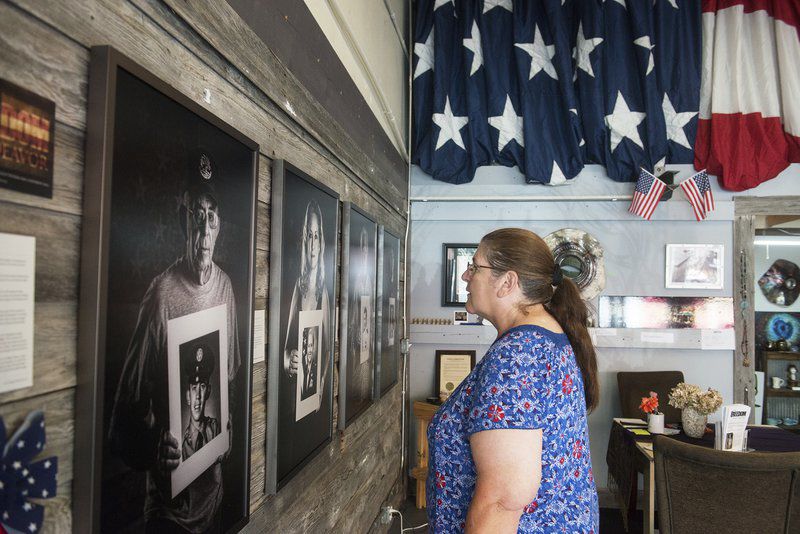 Steve Snyder talks about his "Freedom Endeavor" exhibit on display at the Urban Art Gallery in downtown Joplin. The photograph in the exhibit is an image of a retired military member holding a picture of him- or herself in uniform. GLOBE | ROGER NOMER

The image that would launch Steve Snyder's latest photography project shows his father, Ron, as he was a few years ago at age 80.

The elder Snyder stands in jeans and a T-shirt in front of an American flag backdrop, a ball cap perched on his head and a lifetime of experiences etching lines in his face. In his hands is a picture of himself at age 21, smiling and in uniform from his years of service in the U.S. Air Force.

"It all started out with me trying to figure out how to take a nice photo of my dad," the younger Snyder said. "He was just a great role model growing up. Then I thought, 'Why do I have to just stop at him?'"

Snyder will show his work, "The Freedom Endeavor," this month at an art gallery in downtown Joplin. There are 10 black-and-white photographs, each 24 inches by 36 inches and featuring an image of a retired military member holding a picture of him- or herself in uniform. The veterans range in age from 24 to 90 and represent conflicts from World War II through the present day.

After photographing his father, Snyder found the other nine veterans in his project largely through word-of-mouth. Mount Vernon, where his photography business is based, proved to be fertile ground given that there is a veterans home and a Veterans Affairs clinic there.

Intentionally, all are photographed wearing civilian clothing and appear just as they might if you were to pass them on the street. After all, Snyder said, the goal of "The Freedom Endeavor" is to honor and raise awareness of veterans in everyday life.

"When we go out every day, just think about the people you see. How do you know they're veterans?" he said. "I tell them to come in (for the photo shoot) wearing what they'd wear on a typical day. I want them as they are now."

In her photograph, Maria Carl, who retired in 2013 after 23 years in the U.S. Air Force, holds a picture of her younger self, her hair pulled back and a smile on her face. A native of Mount Vernon, she agreed to be part of the project because she knew Snyder from school and because her father, Navy veteran Hardy Carl, also had been photographed.

"I believe strongly in helping to raise awareness about our veterans and what they do," she said. "And I'm always interested, as a woman, to be participating in something like this because they're so often male-centric, and I think people can forget that women serve too."

In addition to the photos, the exhibit also features interviews with each of the veterans, wherein they discuss why they joined the military and how the experience impacted their lives. Excerpts from the interviews are transcribed; the text will be placed next to each picture. The audio files can be listened to in full on "The Freedom Endeavor" website.

"None of the veterans, no matter how bad their experiences may have been, regret it. They feel like their experiences made them a better individual," Snyder said. "(The audio component) just adds more to the project, when you can look at their pictures and hear them tell their story. ...You can hear the emotion in their voices."

Carl said she hopes audiences will view the photographs and understand the gravity of what veterans do and the sacrifices they have made to be part of the military. Sacrifices were required of her as well; she recalls leaving her daughter, then 2 years old, for an entire year when she was deployed to Afghanistan.

"It's a great reminder that the people who serve are our family and friends and neighbors," she said.

Linda Teeter, owner of the gallery where the project is exhibited, said "The Freedom Endeavor" is the perfect display to honor Independence Day and the entire month of July. She hopes it will inspire viewers to remember their freedoms and the sacrifice that goes into protecting them.

"We need to ... always be thankful" of veterans, she said.

The "Freedom Endeavor" is sponsored in part by the Mount Vernon Regional Arts Council. It also is a sponsored project of Fractured Atlas, a nonprofit arts service organization.

The project is funded through grants and donations. Contributions can be made payable to "Fractured Atlas" and are tax-deductible.

"The Freedom Endeavor" will be exhibited this month at Urban Art Gallery, 511 S. Main St. in Joplin. Check the gallery's Facebook page for hours of operation. A reception for the artist, Steve Snyder, will take place this week during the First Thursday Art Walk.

Excerpts from 'The Freedom Endeavor'

'For an individual, for an American serving, it's of course very satisfying to serve your country. I feel that it's also a good feeling to kno…