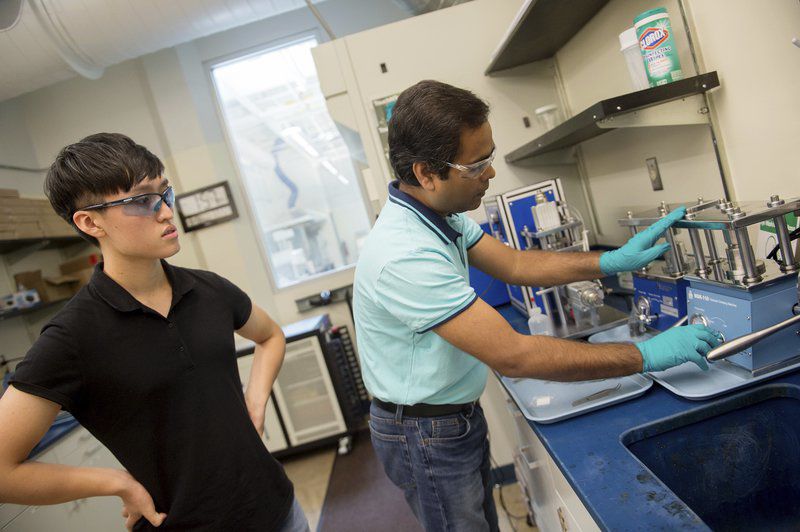 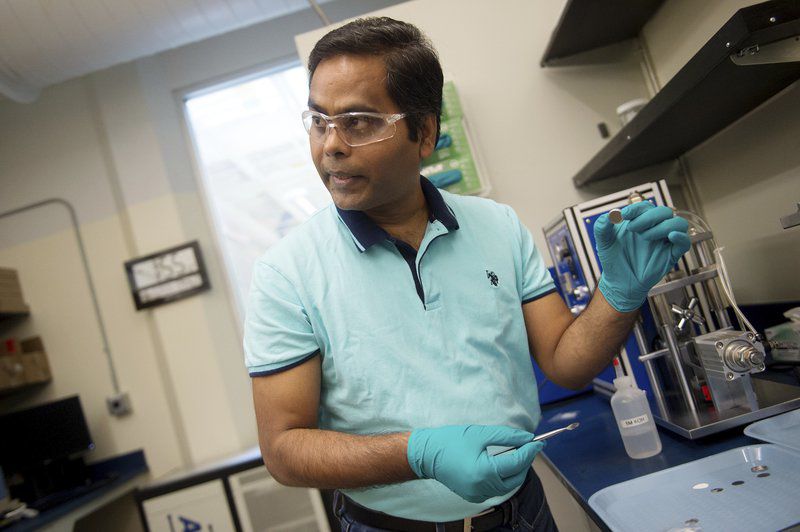 PITTSBURG, Kan. — The next time you make a pot of coffee, think twice before tossing the grounds in the garbage. You just might be throwing away the future of energy storage.

Jonghyun Choi, a Pittsburg State University student from South Korea, was the leader of a team at the Kansas Polymer Research Center that has figured out how to convert coffee waste into energy storage. The process starts with the waste — the grounds that you just throw in the trash when you're done brewing the perfect pot — and ends with a small battery that has a 10-year life span, said Ram Gupta, Choi's supervisor and an associate professor in the PSU chemistry department.

"In the U.S., people consume a lot of coffee," Gupta said. "We thought this is a good opportunity for us to use those coffee ground powders to make something useful."

There's certainly plenty of opportunity for researchers to use coffee waste — approximately 63% of American adults drink coffee daily, consuming an average of three cups per day, according to the National Coffee Association USA.

Belgian researcher Gunter Pauli has written that coffee is "one of the most wasteful consumer products." The planet consumed 126 million bags of coffee in 2009, but the process of harvesting, roasting and brewing coffee "discards an estimated 99.7% of the biomass," leaving an estimated 12 million tons of agricultural waste.

Gupta, Choi and their team found that the carbons from the grounds could be repurposed into energy storage. They have created a supercapacitor, a type of battery that takes only seconds to charge but can last for hours.

Testing continues on the batteries, but the team is dreaming big.

"Can we make cellphone batteries where we can charge a phone for five seconds and then use it for five or six hours?" Gupta said. "Our ultimate aim is a car battery."

For now, the quarter-sized batteries being developed in the research center each use 3 or 4 milligrams of coffee grounds mixed with a certain formula of chemicals and solvents to create a compound that is layered inside a battery shell. The creation of a single battery takes only a few minutes and costs about $2, a price tag that would be reduced to mere cents on an industrial scale, Gupta said. Because no toxic chemicals are used during the process, the battery can be thrown away when its life is over, he said.

"This process is very simple and gives you a good quality material," he said.

Gupta said he envisions, if this process becomes widespread, that large coffee companies could donate their used grounds to the cause rather than throw them away.

"Any coffee (business in the) industry can give you the coffee once they are done," he said.

Choi, formerly an exchange student at PSU, has returned to the university full time to start a master's degree in material science, a new degree program that launches this fall. He said he'll continue his studies into eco-friendly batteries.

"It was very interesting," he said of his research.

About the research center

The center moved into its current 22,000-square-foot site on Research Road east of the PSU campus in 2007, the same year it won the prestigious Presidential Green Chemistry Challenge Award for inventing a new family of polyols in conjunction with Cargill Inc.

Areas of interest for the center have broadened to include adhesives, bioplastics, foams, polymeric oils, solvents and composites. Past research conducted by students and scientists has focused on the sustainability of plastics, the development of flame-resistant foams from biowaste, and new applications for algae and other biofuel sources.

"We are renowned for our work in bio-based materials, but we do a lot more than that," said Tim Dawsey, the center's executive director. "We do what I prefer to think of as applied research."

Dawsey said the center attracts students from both the region and the world to study polymers and help launch their careers in research that offers "industrially relevant outcomes."