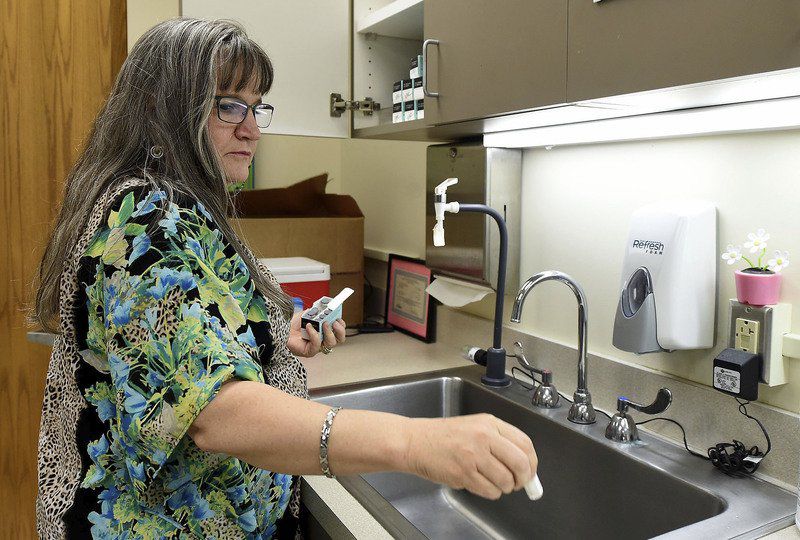 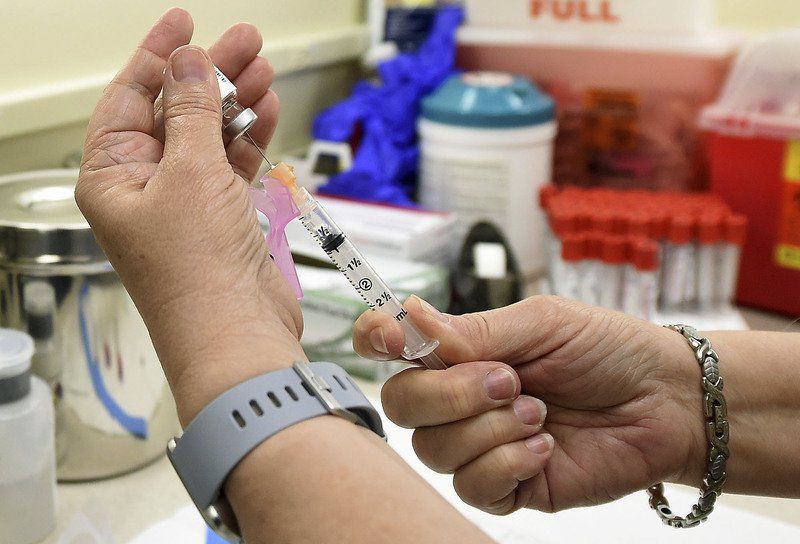 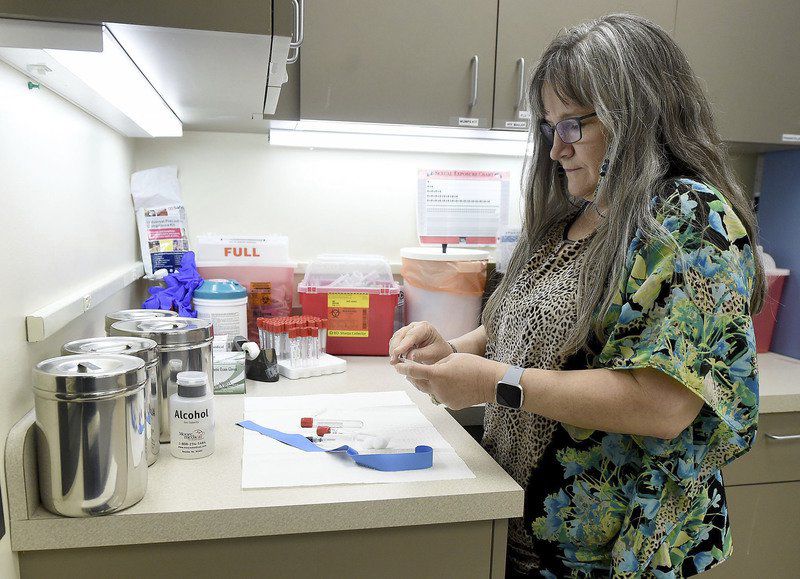 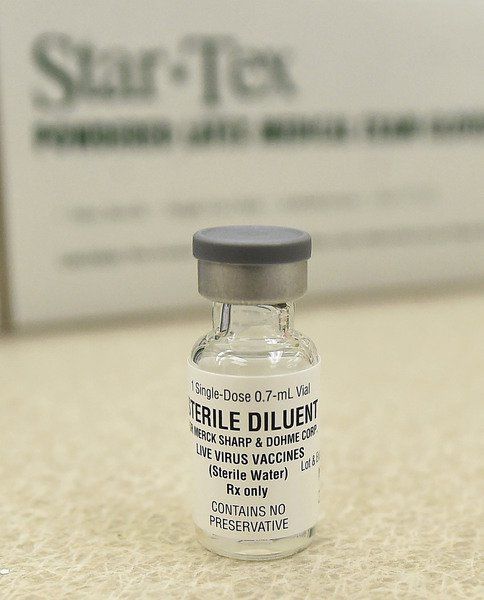 A single dose of the medication used to treat syphilis can cost up to $500 for patients without health insurance or other services to assist with cost of administration of the drug.Globe | Laurie SIsk

A single dose of the medication used to treat syphilis can cost up to $500 for patients without health insurance or other services to assist with cost of administration of the drug.Globe | Laurie SIsk

An unexpected spike in a contagious and potentially life-threatening infection that long ago was thought close to eradication is now causing concern for health and medical professionals in Southwest Missouri.

Jasper and Newton counties saw more cases of syphilis this past year than in the previous six years combined.

The number of cases of congenital syphilis statewide, or cases when the disease is passed from a pregnant mother to her baby, is also the highest it has been in two decades.

While the disease can cause brain damage and blindness if left untreated in adults, syphilis can be cured. And though preventable, when contracted by children or infants, it can cause serious health issues and even death.

While the measles outbreak that has spread across the nation has grabbed headlines as some parents reject vaccines recommended to prevent diseases, Schrage and Cynthia Burnham, medical services coordinator for the Joplin Health Department, as well as other health professionals, have been taken aback by a dramatic increase in the number of cases of the sexually transmitted infection.

The Missouri Department of Health and Senior Services does not yet have 2019 data available, but its statistics suggest the outbreak began last year in Jasper County and even earlier in other parts of the state.

Those numbers include all stages of syphilis, even those that may have advanced past the stage where the disease is active and contagious, because in some cases a person can have syphilis in the early stages, but tests can confirm only that the disease is present and not its level of advancement.

Burnham said the Joplin Health Department has not seen a large volume of positive syphilis tests in recent years but that it does not do as many tests as some other providers. In 2017, three of the department’s 76 tests came back positive; only one out of 57 tests in 2018 discovered a case of syphilis; in the first quarter of 2019, the health department conducted seven tests with one positive diagnosis.

“It is treatable if it’s caught early,” Burnham said. “There’s medications we can give to treat it. And even when it’s at the tertiary — the end stages — it can be treated, but we can’t undo the damage that’s already been done to the body. So you’re still going to live with those health effects that you had when you had it unknown.”

The larger concern is congenital syphilis. According to a 2017 report from the U.S. Centers for Disease Control and Prevention, as many as 40% of children born to mothers with syphilis can be stillborn or die from an infection as infants.

“That’s probably when it gets the most crucial in my world,” Schrage said. “It really has been just as this has escalated that we’re seeing more of the women who are coming in that are pregnant. It used to be that we would expect that at their OB appointment they would get all of the syphilis and the HIV (testing) because that’s part of the routine panel, prenatal panel, that’s done with physicians. But if you’ve got that woman where maybe she’s in a state where she is addicted to heroin or cocaine, she’s not accessing that prenatal care like she should, she may end up passing that syphilis to her baby and then once they deliver, or at birth, they’ve not had any of that testing.”

Health care officials say the suddenness of the outbreak is largely unexplained but that some data suggests an increase in drug use, particularly in rural areas such as Southwest Missouri, has contributed. Syphilis can be spread through either the transfer of bodily fluids or skin-to-skin contact, and that contact can be with any part of a person’s body. And although it is considered a sexually transmitted infection, syphilis can be spread through blood contact, such as people sharing needles for drug use.

Craig Highfill, director of prevention and field operations for the state Bureau of HIV, STD and Hepatitis, said drug use and addiction also tend to lead to more naturally risky behaviors such as having unprotected sex, potentially with multiple partners.

“If somebody is using drugs, it could be that they are exchanging sex for drugs,” he said. “Or that when they are using the drugs, then the behaviors that may put them at higher risk for syphilis, they’re not able to make the decision that they normally would without being on the substances as well, so that factors in too.”

According to the Missouri Department of Health and Senior Services, the state saw 18 congenital syphilis cases in 2018 — the most in any year since 1998.

In the 2017 CDC report, the agency recommended that every pregnant woman be tested for syphilis at the beginning of her pregnancy and that those at high risk of contracting the disease also have follow-up screenings. Highfill said the state’s guidelines also recommend that syphilis testing be treated as a “standard of care” of pregnant women.

Schrage said there are a number of reasons the outbreak has taken people by surprise and that also potentially explain a part of the reason for the rapid spread of syphilis. Because syphilis is an infection that had been fought back nearly to obscurity in recent years, it isn’t something patients or medical professionals anticipate seeing, meaning either party may dismiss the lesions or rashes syphilis often causes as harmless and not ask for a test.

“We thought it was pretty much eradicated several years ago,” she said. “And back 16 years ago when I started at the clinic, people generally talked about it as a disease from yesteryear. Like if you saw a case it was probably somebody who was flown in from a different country and it was on either side of the coast. So it wasn’t until about three years ago that we started seeing a few more cases.”

Even when people suspect they may have syphilis, it’s no guarantee they’ll take the necessary steps to get checked out, she said.

Highfill said that one of his agency’s priorities has been urging doctors and other health care providers to consider the possibility of syphilis and to spread awareness of the disease’s newfound prevalence throughout the state.

“(Syphilis) can mimic other conditions,” he said. “And syphilis can also invade the neurological system at any stage, and so a lot of ocular syphilis that affects the eyes, people with blurry vision go to doctors and they get diagnosed with something else and then their vision gets worse and worse and finally someone will run a test and they get diagnosed (with syphilis).”

Charity Galgani, a nurse practitioner with Planned Parenthood of the St. Louis Region and Southwest Missouri, said general unfamiliarity with syphilis can intimidate patients when they are diagnosed, meaning providers such as Planned Parenthood need to focus energy on education in addition to treatment.

“I tend to find that if we do have a positive test, we can get them back in the door,” she said. “(But) I think people are scared when they get the diagnosis, and that comes all the way back around to the care, that there’s not good advertising for syphilis in general; people don’t know what it is and it’s a scary diagnosis for people. It very much is an important STI that we educate not just patients about but health care providers. Part of what we do at Planned Parenthood is education.”

Galgani and Jesse Lawder, vice president of marketing and communications for Planned Parenthood, stressed the importance of condom use in preventing syphilis and other sexually transmitted diseases.

Highfill said that an added challenge for the current push against syphilis’ spread is thinning resources to put toward the fight. He said the state agency’s budget has been reduced by more than $400,000 since 2012. The organization has begun receiving supplemental funding from the federal CDC, he said, but the amount it is allowed to spend on clinical services has been capped and even that must be proven justified.

Highfill said that many community health organizations can provide syphilis treatment for free or at a low cost, but without insurance or programs that allow those clinics to provide it, the injections can cost as much as $500. In some cases, he said, patients require as many as three injections, making treatment potentially cost-prohibitive for some.

Lawder said Planned Parenthood also continues to struggle with cuts to the organization’s reimbursements from Medicaid that were approved by the Missouri Legislature this past year. He said that the organization is frequently asked to help fight medical issues such as the syphilis outbreak but doesn’t have the resources to do so.

“One of the problems is treatment,” he said. “And a lot of these agencies, these public agencies, including the state, are referring positive cases to Planned Parenthood for treatment. And we’re happy to do it.”

But, he said, that gets more and more difficult for Planned Parenthood and other medical providers to do when resources stay stagnant or decline.

CARTHAGE, MO - William "Bible Bill" Tucker, 80, a laborer, passed away Friday, February 14, 2020. Memorial services will be at 3 p.m. Tuesday at Columbus (KS) Christian Center. Arrangements are under the direction of Weng Funeral Chapel