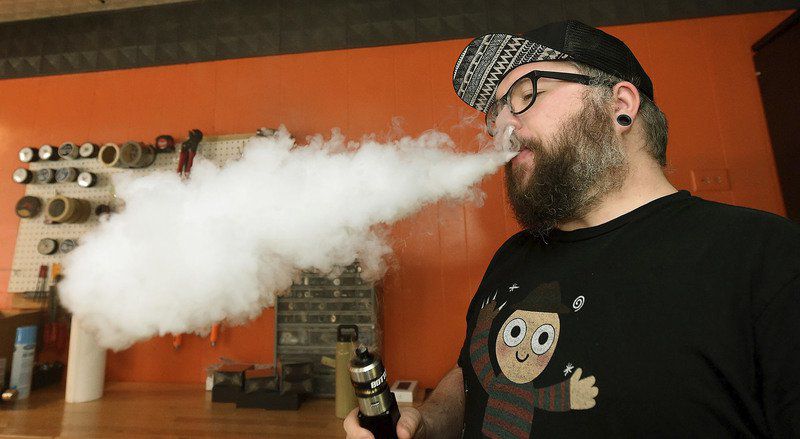 Shane Mullins, of SWMO Vape Shop in Joplin, exhales a draw off an atomizer on Wednesday. Local governments are considering raising the legal age to buy tobacco and vaping supplies to 21. GLOBE | LAURIE SISK 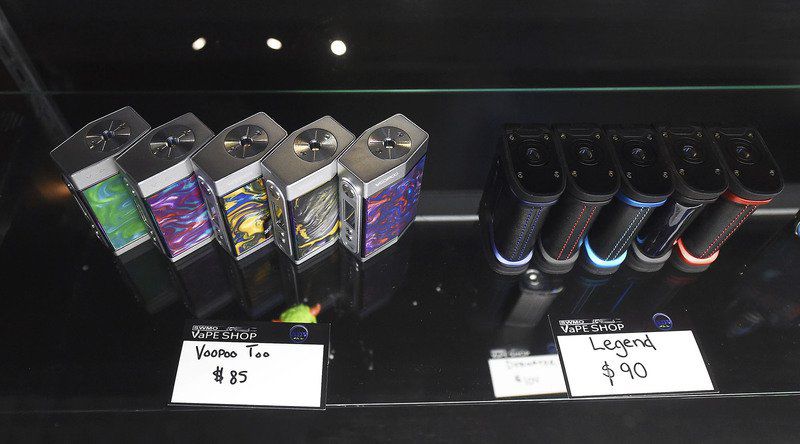 Atomizers line a shelf at SWMO Vape Shop on Wednesday. Under some area proposals, people would be required to be 21 before being legally able to buy such products. GLOBE | LAURIE SISK

Shane Mullins, of SWMO Vape Shop in Joplin, exhales a draw off an atomizer on Wednesday. Local governments are considering raising the legal age to buy tobacco and vaping supplies to 21. GLOBE | LAURIE SISK

Atomizers line a shelf at SWMO Vape Shop on Wednesday. Under some area proposals, people would be required to be 21 before being legally able to buy such products. GLOBE | LAURIE SISK

The discussion of Carl Junction’s latest public health and safety ordinance, which would raise the age to purchase and possess tobacco, nicotine and vapor products from age 18 to 21, may soon be echoed in Joplin.

The Carl Junction City Council discussed and tabled the proposed ordinance Tuesday night after deciding it would like to hear more opinions from constituents on the matter before moving forward.

Joplin City Council member Keenan Cortez told the Globe on Wednesday he is a smoker who supports increasing the age to 21. He recently asked the council to revisit the topic.

“I think it’s a wise and prudent thing for our leaders to consider, to try to help curb the current epidemic that plagues our youth with these tobacco products,” he said. “I am totally in support of that. I have discussed it with my counterparts on the City Council, and I do believe we have a pretty good consensus that it will be something that we tackle prior to the end of this year.”

The issue of whether to adopt tougher smoking regulations has been brought before Joplin City Council over the past few years, but members didn’t take any action on those requests. Scott Vorhees, who co-chairs the health and wellness team of Vision 2022, was one of the proponents who has led the charge to persuade Joplin officials to implement Tobacco 21, an ordinance that prohibits tobacco sales to anyone younger than 21.

Vorhees said the team presented its proposals and findings on Tobacco 21 and the issues that the city should be addressing back in 2017, but it was put on the back burner.

Vorhees plans to bring up the issue again before the Joplin City Council in November.

The topic is being revisited by area cities because of serious lung injuries reported in people who use electronic cigarettes and other vaping devices.

The number of vaping-related illnesses in the U.S. continues to rise, now reaching about 1,300 cases and at least 26 deaths, The Associated Press reported last week. Forty-nine states and one U.S. territory have reported illnesses. Only Alaska has not seen a case. On Oct. 10, the Centers for Disease Control and Prevention said 219 cases were reported in the past week. The count had risen by 275 each of the previous two weeks.

The outbreak appears to have started in March. Symptoms include severe shortness of breath, fatigue, and chest pain. Most who got sick said they vaped products containing THC, the marijuana ingredient that causes a high, but about 1 in 8 said they vaped only nicotine.

Cortez said it’s a responsibility for the council to do what it can to limit the ability of youth accessing these types of products.

“I’m proud of Carl Junction for taking up the cross, if you will, to tackle that and look at it,” he added.

A common argument among critics is that if, for example, Carl Junction’s ordinance passed, then nothing would stop teens from going to a nearby city and purchasing tobacco products there. Cortez said a way to combat that issue is for other cities to take up similar legislation, and his hope is that it deters at least one child from getting addicted or hurt.

“I think it’s something that not only we need to do in Joplin and Carl Junction, but we need to do in the entire Four-State Area,” he said. “I also believe that if the Carl Junctions, the Webb Cities, the Carthages, the Cartervilles, see Joplin step up and say this is the right thing to do for our community, then maybe those smaller communities will follow and make it even harder for them to access it. We’re going to get blowback from vape shops, and I get it that they’re trying to make money, but not on the backs of our youth.”

Austin Clay, SWMO Vape Shop store manager, said he doesn’t believe raising the age to 21 would really prevent any teens from purchasing or using the products because they’re still going to get their hands on it, regardless of the legality. When asked about his take on the recent vaping illnesses around the country, Clay said that the findings haven’t been related to any salt nicotine or freebase nicotine products.

“The illnesses are related to black market and even some reputable THC cartridge companies,” he said.

If the ordinance were to pass in both Carl Junction and Joplin, Clay said, it wouldn’t make much of a difference to his shop in the way of sales. He said that his shop's customers between the ages of 18 and 20 make up 25% to 30% of his overall sales, but a majority of customers are between the ages of 30 to 60.

CARL JUNCTION, Mo. — A proposal to raise the age in Carl Junction to buy tobacco and vaping products from 18 to 21 years old prompted a spirit…