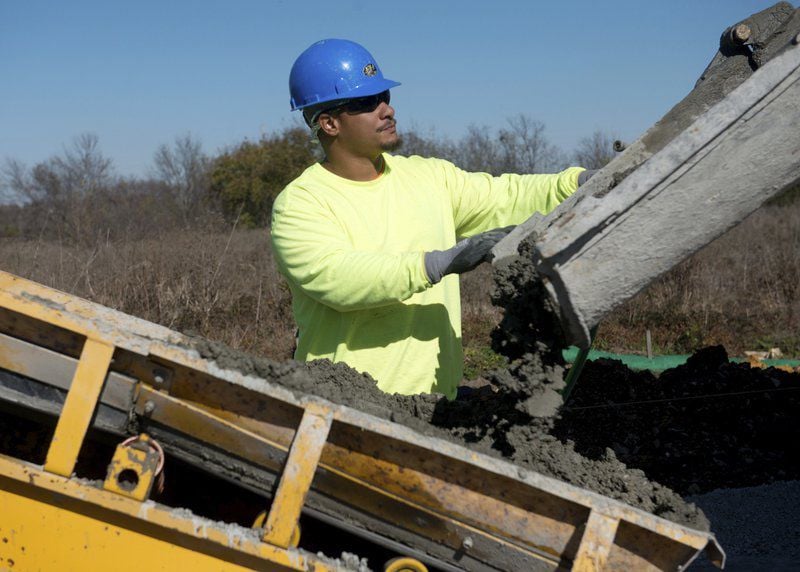 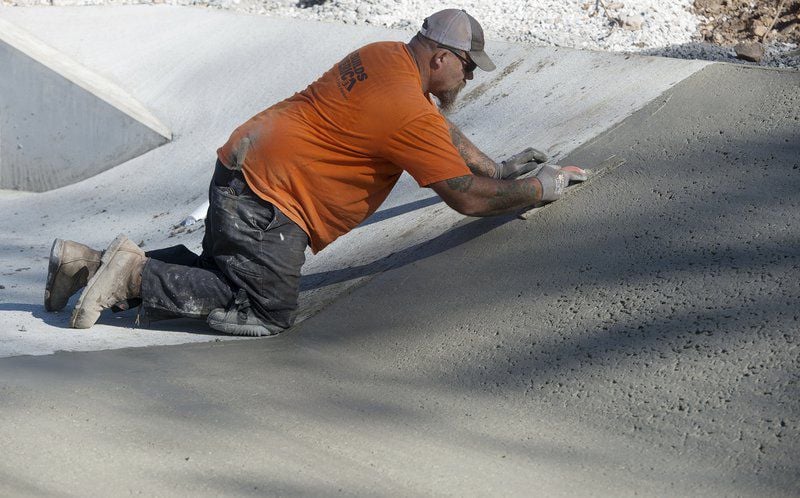 Jason Conrad works on a drainage ditch on Tuesday at 10th and Peters. Globe | Roger Nomer 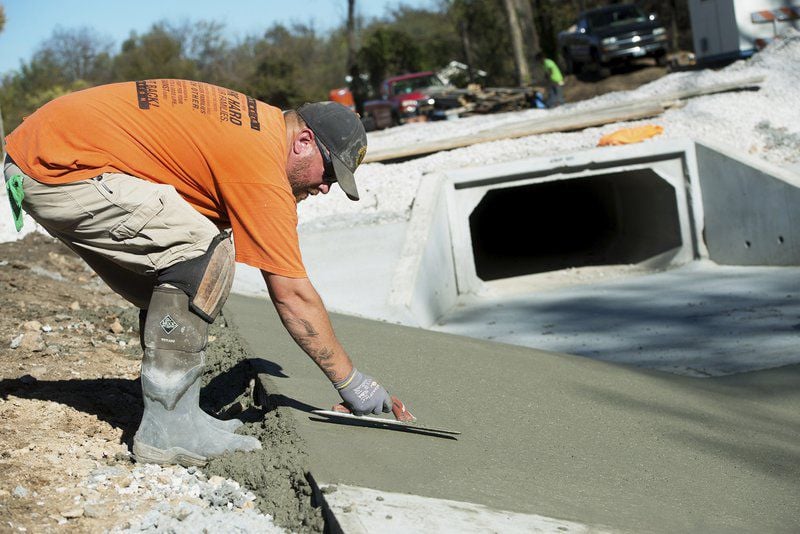 Gabe Lacey works on a drainage ditch on Tuesday at 10th and Peters. Globe | Roger Nomer 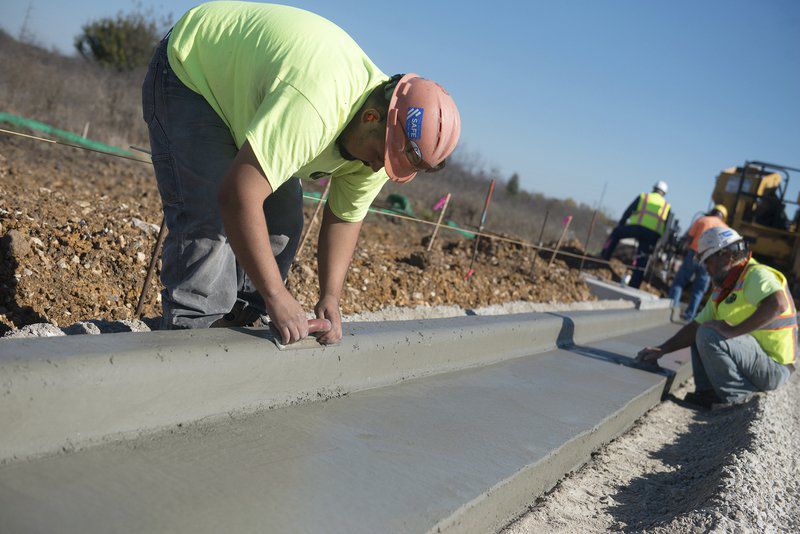 Jason Conrad works on a drainage ditch on Tuesday at 10th and Peters. Globe | Roger Nomer

Gabe Lacey works on a drainage ditch on Tuesday at 10th and Peters. Globe | Roger Nomer

Buddy Mitchell has been a card-carrying union member since he was 30 years old. Sitting in the Joplin headquarters of Laborers’ International Union of North America, Mitchell, now 73, said he was able to retire comfortably after years of backbreaking work as a construction laborer because of his union pension and benefits package.

But he fears unions, which have lost much of their membership in Missouri, could suffer another blow come January, when Republicans have vowed to push through right-to-work legislation. This time they have a governor who has promised to support the bill.

Mitchell, of Joplin, doesn’t want Missouri to go the way of most of its neighboring states.

With sadness in his voice as he pointed to his fellow union retirees, he said: “No young person today is going to do what we’ve done."

“You are not thinking, ‘I’m just going to work until I die,’” Mitchell added of the benefits of being in the union.

At their peak about 50 years ago, unions represented one of every four workers in Missouri, but today it's less than 9 percent.

Not only has Republican Gov.-elect Eric Greitens, with the backing of the Missouri Chamber of Commerce and Industry, vowed to sign right-to-work legislation in his first year, but pro right-to-work Republicans shored up their supermajority in each chamber earlier this month, though without a governor to veto the legislation fewer votes will likely be needed to guarantee it becomes law.

Greitens could not be reached for comment last week, but within days of the election he met with Republican lawmakers to lay out priorities. Both House Speaker Todd Richardson and Senate President Pro Tem Ron Richard have also said passing a right-to-work law barring mandatory union fees is at the top of their shared list of priorities.

Richard said it is premature to discuss when that legislation might advance, given that he hasn’t appointed senators to committees that are absent of chairmen.

“Right-to-work is a bit of a misnomer,” Richard added. “It’s more of ‘freedom to work.’”

Richard said that with right-to-work he hopes Missouri will become more attractive to more companies — especially those in the automotive industries — and create more jobs.

"There were a lot of issues,” Richard said. “Right-to-work was part of the equation.”

State Rep. Bill Lant, R-Pineville, said he hopes to have a hearing on right-to-work legislation — preferably on the bill that was passed in 2015 — within the first 30 days of the session. Lant chairs the Workforce Development and Standards Committee, which has seen labor bills in the past.

“If they present the same bill we presented last year, it should pass with no problem,” Lant said.

Lant also said that after listening to testimony for years about right-to-work that he’s heard both sides and wants to ensure the issue gets a fair hearing.

“Both sides have a valid argument,” Lant said.

He also said that for him the prospect of job creation girds his support.

Although they are in the minority, some Democrats have vowed to fight, including state Sen. Gina Walsh, who is president of the Missouri State Building and Construction Trades Council. Senate Democrats picked Walsh, of Bellefontaine Neighbors near St. Louis, to be the next minority leader when the General Assembly convenes in January.

But even with a fight, passage of right-to-work next year may not have the drama of the last two years.

Despite Democratic Gov. Jay Nixon’s past support for unions, Missouri lawmakers passed a right-to-work law in the spring of 2015, which Nixon vetoed. During the September veto session later that year, about 20 Republicans crossed the aisle to vote with Democrats to sustain Nixon’s veto.

That led to a campaign to unseat pro-union Republicans and Democrats, but that effort didn’t come cheaply. With no campaign contribution limits under the law at the time, both unions as well as some of Missouri’s biggest donors poured upward of $10 million into electing their favored candidate to push their agendas.

This summer, the fight over right-to-work escalated when Humphreys aired an ad during a Kansas City Royals game instructing people to go to a website that showed them how to decertify a union. In response, the Committee to Protect Missouri Families, backed by labor organizations, aired an ad and launched a website asking Missourians to boycott Humphreys’ company.

Contacted last week, Humphreys deferred to earlier comments, in which he said, "we will continue to support union-free environments as the best option for working people. People shouldn’t have to pay to get and keep a job.”

Though Humphreys didn’t back Greitens in the primary, he said Greitens’ commitment to signing right-to-work legislation, as well as education and tort reform, ultimately won him over. He and other family members donated more than $1 million to Greitens in the last weeks of the election.

'Seat at the table'

Like he has every session since he was elected, state Rep. Bill White, R-Joplin, also said he plans on filing a bill for the upcoming session to establish a right-to-work law.

He said right-to-work is an issue of “freedom of association," and he said he believes workers shouldn’t have to pay dues in order to be hired or to work at a company. Plus, he said he thinks unions “stifle an individual’s ability to advance based on their merit.”

White also said that campaign contributions made by unions might not reflect the political beliefs of rank-and-file members.

Jim Evans, the IBEW business agent representing several hundred workers of The Empire District Electric Co. as part of Local No. 1474, said that union dues are strictly used to keep the union running, paying for training sessions and for representation. Managers at the company decide promotions and the union makes recommendations looking at qualifications and abilities, with seniority prevailing. Overtime is distributed as equitably as possible, through a revolving list, he said.

Evans represents a “closed” shop union in which all the workers under a certain job description within Empire are union members. The union has a good relationship with the company and has never gone on strike, he noted.

“We work together, we have a common goal here,” Evans said. “All we want is a seat at the table.”

Evans, who has been elected to his position four times, said right-to-work most likely won’t affect his union because he doesn’t think there will be a drop in membership. Instead, he is worried about an onslaught of other legislative bills that could make it harder for unions to exist, such as having to recertify their union every year or getting written permission of each member to collect dues.

“(Lawmakers) are going to try a lot of things" besides right-to-work, Evans said.

White said one of the reasons for his support of right-to-work is his belief that companies that might otherwise relocate or expand in Missouri go to right-to-work states instead.

That reasoning is one of the primary factors the Missouri Chamber of Commerce and Industry wants right-to-work as part of a multi-step plan it calls "Missouri 2030." With more companies coming to Missouri, offering more jobs, workers would benefit, White said.

“It’s not the doom and gloom (unions) want to project,” White said.

But if businesses do relocate to Missouri, their pay won't match union rates, driving the wage structure down, Evans said.

“I hope they attract a lot of business because I think people are going to have two or three jobs,” he said.

Stacey Salmon, business agent for the Laborers' International Union of North America, pointed to several of Missouri's neighbors that are right-to-work states, including Kansas, and noted that some of their residents come to Missouri to work because they can get a better wage even though proponents of right-to-work say those states have stronger economies and job prospects.

At the Carpenters Local No. 311 in Joplin, also at 2001 Empire Ave., Corin Berryhill said membership has been strong despite low union density in Southwest Missouri. He oversees 70 apprentices, getting them the training they need to become a journeyman. Berryhill worked through the program himself when a football career at Missouri Southern State University was cut short because of an injury.

“If someone doesn’t have that opportunity, a union wage still gives them a career,” Berryhill said, adding that unions were formed in the region to promote better and safer working conditions as well as better wages and benefits.

Despite growing up in a Republican household, he said people in the area have given him flack for supporting Democrats who value unions.

“We are so hated,” Berryhill said. “But we are just middle-class people.”

If Missouri passes right-to-work, it will be the 28th state to do so, following West Virginia, which passed its law earlier this year. One of the first states to pass the law was Missouri’s neighbor to the south, Arkansas, in 1944. Since then, all of the states surrounding Missouri, with the exception of Illinois and Kentucky, have passed right-to-work laws.

Southwest Missouri has significantly less union density than in urban areas. According to the Bureau of Labor Statistics, in 2015 there were about 230,000 card-carrying union members in Missouri and 257,000 workers represented by unions, which is between 8 and 10 percent of employed Missourians.