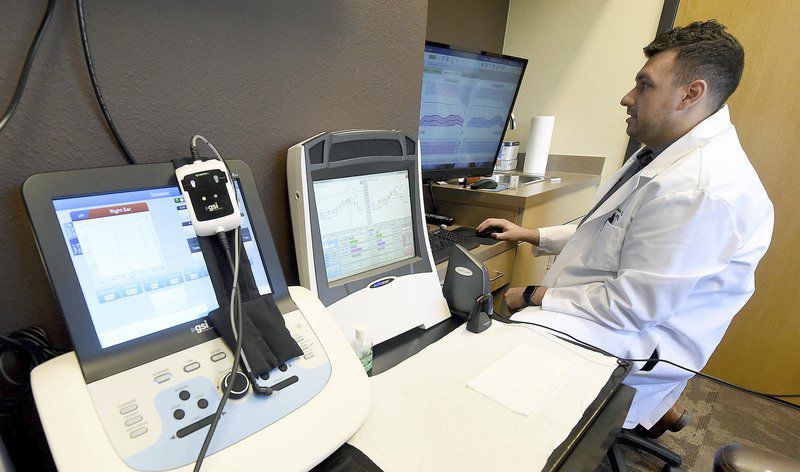 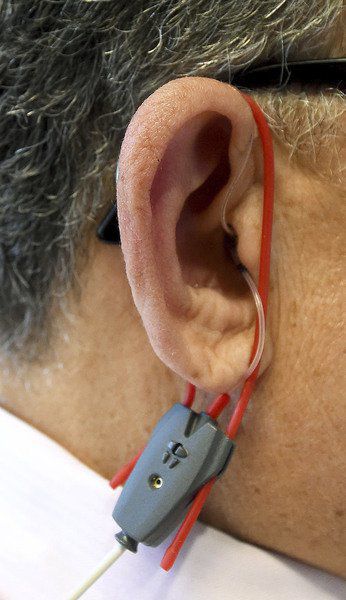 A probe microphone inside the ear is used to diagnose and treat tinnitus. Globe | Laurie Sisk 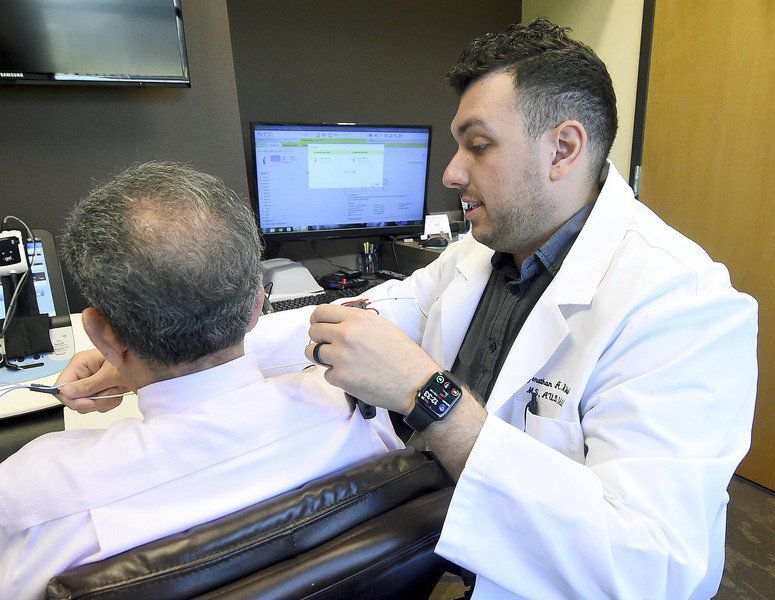 Dr. Jonathan Mikhail demonstrates use of a probe microphone inside the ear on Thursday at the Area Hearing and Speech Clinic. The tool is one of many Mikhail uses to diagnose and treat tinnitus. Globe | Laurie Sisk

A probe microphone inside the ear is used to diagnose and treat tinnitus. Globe | Laurie Sisk

Dr. Jonathan Mikhail demonstrates use of a probe microphone inside the ear on Thursday at the Area Hearing and Speech Clinic. The tool is one of many Mikhail uses to diagnose and treat tinnitus. Globe | Laurie Sisk

Seth Martin, a Carl Junction native who served in the U.S. Army, describes it as “having basically a dog whistle that only you can hear, being blown inside your ear at all times.”

“It’s not really high-pitched, but it's not low-pitched,” she said. “It’s one of those things that’s always going, and it affects my hearing.”

Martin and Landwer are describing tinnitus, that ringing in one’s ears that can range from a small nuisance that comes and goes to a real health problem that can cause anxiety and loss of sleep and can be a symptom of a more serious medical problem.

The Mayo Clinic’s website entry on tinnitus says 15% to 20% of people are affected by some level of tinnitus.

Dr. Jonathan Mikhail, with the Area Hearing and Speech Clinic in Joplin, says he treats dozens of people for tinnitus, and the causes of the condition are varied.

“It’s actually cochlear responses from the hair cells,” Mikhail said. “In the 1970s, a doctor by the name of David Kemp in the UK found that the cochlea, the snail-looking thing in our head, is actually active and not passive, basically meaning when sound is received, the cochlea is able to send sound outward, which explains tinnitus.”

Mikhail said the cochlea is the “snail-shaped organ” in a person’s inner ear that contains hairs that produce nerve impulses in response to sound vibrations that create the sensation of sound in a person’s brain.

“Most of the time, tinnitus is associated with hearing loss,” Mikhail said. “For example, if you have someone who maybe has a lot of occupational noise and they don’t wear hearing protection or they’re just around consistent loud noise, it can cause tinnitus to occur, so those hair cells are basically sending out a signal of, 'Hey, that’s a little bit too loud for me.' So if you go to a loud concert, you don’t wear hearing protection, a lot of people will leave with tinnitus or they’ll hear ringing in their ears chirping, and it's actually because you’ve had a threshold shift in those hair cells. Usually it’s temporary, but sometimes, it can be a permanent change.”

Mikhail said the problem can also be related to the use of certain medications, such as diuretics, Tylenol or some kinds of blood pressure medications. Caffeine, even in small amounts, can cause tinnitus.

He said it can also be a symptom of a more serious disease, such as Meniere’s disease, a condition associated with an overabundance of fluid in the inner ear.

“And that fluid can cause ringing in those moments; sometimes it can last for hours, but it will eventually subside when that fluid drains out of the inner ear,” Mikhail said. “Head injuries — I’ve got patients that we only see for tinnitus, and it’s because of head injuries. I’ve got a guy that was in a car wreck; he has no hearing loss, but he’s had tinnitus ever since the car wreck. So we use habitual techniques and therapies to help him cope with the tinnitus.”

Mikhail said the Veterans Administration is one of the largest employers of audiologists in the world, and it’s because tinnitus and hearing loss are common medical complaints from past and present members of the military.

Martin, who lives in Ohio now, was in the U.S. Army for five years and served in the infantry.

“I was an indirect fire-infantry, which is basically mortars,” Martin said. “Basically it’s a big cannon and makes a really loud sound. The best way I can describe it is when you see some of those videos of someone shooting a 1-pound bag of tannerite, but it’s going off right in your head. It barks a big 6-foot flame out of the barrel.”

Martin said he was given hearing protection when firing mortars on the practice range, but sometimes the protection was ineffective.

He said the ear plugs he and other soldiers were issued are the subject of a lawsuit against the manufacturer, 3M, because the plugs were ineffective.

“It has an impact on my sleep, and it does have a small impact on my day-to-day life,” he said. “When my ear starts ringing, it feels like there’s a huge pressure on my left ear because of the ringing, and I can’t hear anything out of my right ear either. I only get the ringing in my left ear, but I get pressure in both ears when the ringing starts.”

Landwer, who works for the Joplin Area Convention and Visitors Bureau, said she has hearing loss, and her tinnitus is part of the problem.

She traces her tinnitus to an illness she had in 2015. But loud concerts she attended in high school and college could have contributed as well.

“I dated a guy that was in a band,” Landwer said. “So we were all the time going to shows for him or he had hook-ups at the venues in Springfield so any time a band came in to town we’d go see it, and we'd always be right in the front row in front of the big, giant speakers. And it it probably hasn't been helped any by the fact I've never been real religious about using ear protection when I shoot my pistol.”

Landwer said her hearing loss is pronounced enough that she relies in part on lip reading to communicate.

“I’ve had hearing loss in both ears and I would be benefitted by hearing aids, but — and it’s a big but — there’s two pieces to that that aren’t good for me,” Landwer said. “The first is that insurance does not cover any of it. The second piece is that I would not be a candidate for the in-ear aids, I would have to wear the over-ear aids, and with short hair, I don’t know about that.”

Martin said he sleeps with a fan in his room because the background noise seems to reduce the ringing.

“And if it’s too cold for my fan, I’ll just put something on Netflix that I’ve watched before and put it on really quiet to where I can just barely hear it,” Martin said. “It’s effective.”

Landwer said she has to have the television on in order to sleep.

“I have to have some kind of background noise in order to direct my stimulus toward that noise instead of the ringing,” she said.

Mikhail said people with problematic tinnitus can use background noises of different levels to mask the sound and live and sleep more comfortably.

“A fan is a broadband sound,” Mikhail said. “It’s not tonal, it’s just a broadband sound, so it will cover a spectrum of frequencies, but using a television or a podcast is a very simple distraction tool. Some people use hearing aids, even if they don’t have hearing loss, to help with tinnitus.

“This patient I have that was in a car wreck, he hit his head on the dash. While he doesn’t have hearing loss, we use hearing aids and present a masking signal that is what we call a broadband signal, and we modulate the signal so the brain cannot keep up on the repetitions. I know specifically for this person, he wears the hearing aids pretty much all day, sleeps in them, because of that.”

More information on tinnitus can be found on the Area Hearing and Speech Clinic’s website, https://areahearingandspeech.com.

The Mayo Clinic’s website has a detailed description of tinnitus, its symptoms and some treatments as well at https://www.mayoclinic.org/diseases-conditions/tinnitus/symptoms-causes/syc-20350156.