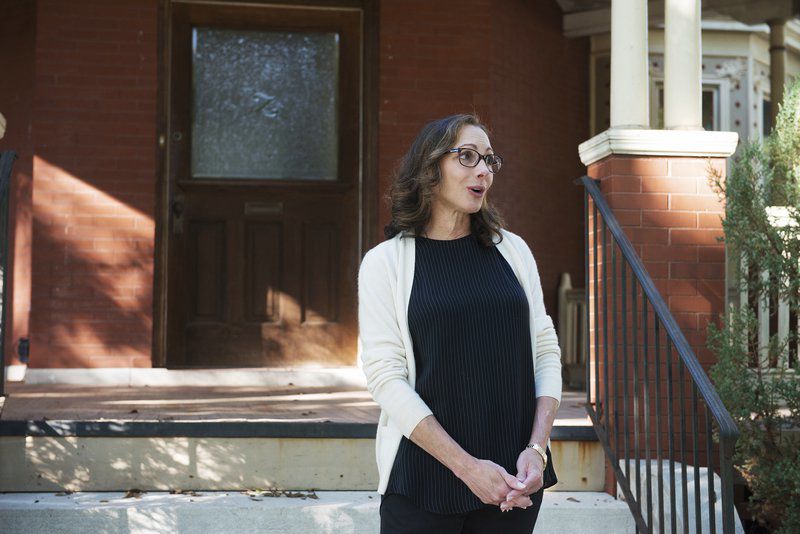 Debra Humphreys talks about restoration efforts during a tour on Wednesday. She said the goal of the project is to have "a living museum that looks at life in Joplin at the turn of the century and brings it alive for our local children, families and visitors so that we can have a window in the fascinating and rich history of Joplin." GLOBE | ROGER NOMER 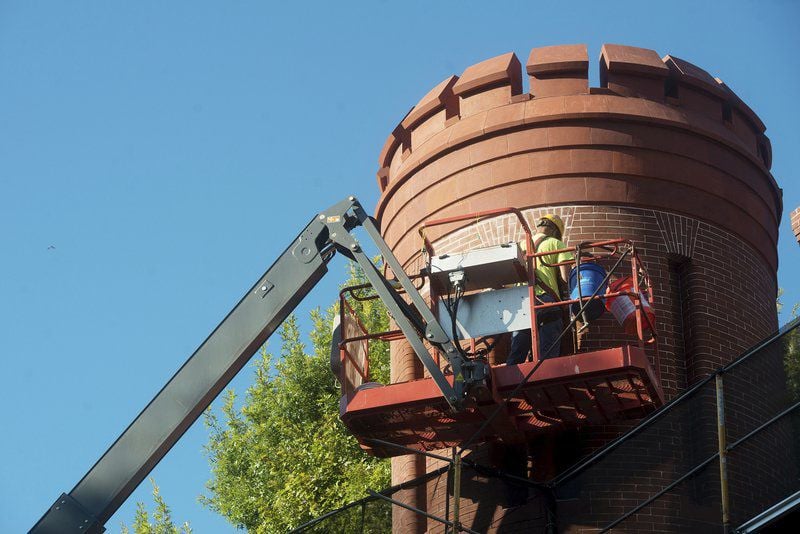 Work continues Wednesday morning on the exterior of the tower turret of the Schifferdecker house that is part of a living history museum project. The project was created by David and Debra Humphreys and their family, and is to result in the Schifferdecker, Zelleken and A.H. Rogers homes being restored to form the Joplin Historical Neighborhoods living history museum. David Humphreys is the chief executive officer and president of Joplin-based TAMKO Building Products. GLOBE | ROGER NOMER 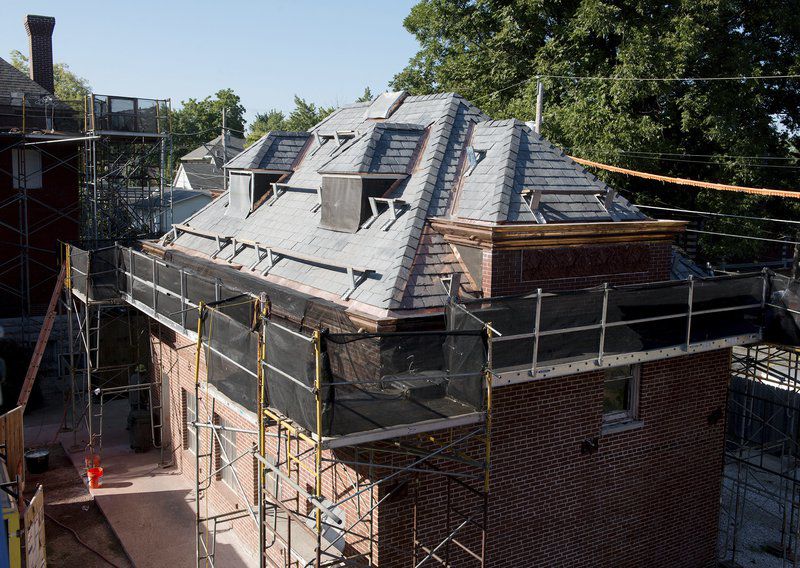 A family whose fortune has been made manufacturing roofing products will restore the Victorian-era houses of their Joplin museum project with slate tiles of a type original to the houses and now recognized as the best in America, if not the world.

Restorers who unearthed bits and pieces determined that Buckingham slate quarried in Virginia originally topped the Schifferdecker and Zelleken houses and outbuildings in the 400 block of Sergeant Avenue.

Those houses were built by early Joplin businessmen Charles Schifferdecker and Edward Zelleken in 1890 and 1893, respectively. A third house acquired for the project, the nearby A.H. Rogers home, 623 W. Fourth St., is to be restored in the future, and the slate tile also will be used there.

"What makes these tiles unique to other slates — and they are considered to be the Rolls-Royce of slate in America — is there is mica that is in the content of the slate that gives it a glisten or a sparkle that sets it apart from a Vermont slate or a Pennsylvania slate," said Tony Raleigh, of Renaissance Roofing, of St. Louis, the roofing contractor.

The slate is quarried in Buckingham County, Virginia. There are two quarries there that opened in 1867. Buckingham slate is a dense, black slate that has been known to last 150 years.

"We have pulled them off roofs where the underlayment systems have failed prematurely but the slates were still in great condition at over 100 years old," Raleigh said.

Thomas Jefferson, founder of the University of Virginia, used Buckingham slate for the university buildings during construction from 1817 to 1826. That type of slate also was used on the Smithsonian Institution, Raleigh said.

A slate roof costs about 10 times that of an asphalt shingle roof system, he said.

Renaissance has been in business about 25 years and has installed more than 1,000 roofing systems for government buildings, churches and historic structures in metal, copper and tile, but it specializes in slate, said Brad Belk, director of the Joplin Historical Neighborhoods project.

Raleigh said about a third of company's roofing jobs involve the use of the Buckingham slate.

That company has previously roofed houses designed by architects such as Frank Lloyd Wright, David Adler and H.T. Lindeberg. The company has been featured on the History Channel show "Back to the Blueprint."

Michael Engelbert Griffin, the preservation architect on the project, said that the first of the slate work is being finished now on the Schifferdecker carriage house, which will serve as the ticket office and admission point to the museums once they are operating.

Before the new roof material goes on the houses, preparatory work included rebuilding the crumbling chimneys on the houses. Photographs of the old houses have been key to helping determine restoration details, Griffin said.

"We have rebuilt a chimney on the north side of Schifferdecker house that was so bad you could literally just pull the bricks out," Griffin said. A chimney on the Zelleken house was able to be rebuilt like the original one thanks to a photograph of the old house that was supplied by Murphysburg resident Paula Callihan. Griffin said they enlarged the photo and were able to count the courses of brick in order to rebuild it consistent with the original.

"The hips, the details we are getting from these photographs, showed a piece of copper highlighting the ridge lines, "so when you look at Zelleken when we're done, it will be a true restoration. It will look just like it did at the turn of century. A lot of that is authenticity with the goal of teaching what was here. If we can have this rare example where it looks like it did then, it really helps push that cause."

The project is the creation of David and Debra Humphreys and their family. It was announced last year that a foundation formed by the Humphreys family had purchased the houses to create the Joplin Historical Neighborhoods living history museum. David Humphreys is the chief executive officer and president of Joplin-based TAMKO Building Products.

Earlier this year, work started to restore the red brick and tuckpointing of both houses as well as the windows. A building permit issued by the city in June showed the cost of the exterior work on the houses at $1 million.

"We continue to make progress on the Schifferdecker home and carriage house as well as the former Zelleken house and garage," Belk said Wednesday during an update on the status of the project. More than 20 workers are on-site.

"Most complete of the four structures is the Schifferdecker carriage house, where the masonry work, copper gutters and slate roofing are near completion," Belk said. Tuckpointing of the Zelleken house is nearly completed.

Window contractors Bob and Sam McCarty, of Ferguson, are continuing to make progress on the restoration of the windows at the Schifferdecker House, Belk said, and Sam Lopp is restoring the stained-glass windows there.

"We are forever grateful to Debra and David's generosity, and it is the forever part that is most fascinating," Belk said. "Debra and David have made a commitment to future generations with today's restoration work. The preservation now will greatly impact visitors for decades to come.

"Restoration is slow, tedious and expensive, but when the restoration is completed, people will be delighted to be transported back to the Joplin era of the 1890s," Belk said.

Debra Humphreys represented the Humphreys family at the update.

She thanked Belk and Michael Englebert Griffin, the restoration architect, "and all of those working on the project to bring the dream of having a living museum that looks at life in Joplin at the turn of the century and brings it alive for our local children, families and visitors so that we can have a window in the fascinating and rich history of Joplin."

There is an addition to the staff at Joplin Historical Neighborhoods museum project — Charlie, a white cat with black and dark gray patches.

"He's a homeless guy, but I've invested in him and he's part of the team now," joked Brad Belk, the museum director, adding that Charlie is named for Charles Schifferdecker.

Belk, known for keeping the cat Percy at the Joplin History and Mineral Museum, has had Charlie treated at the vet and cleaned up for his new position as companion to Belk and the crew of 20 workers.