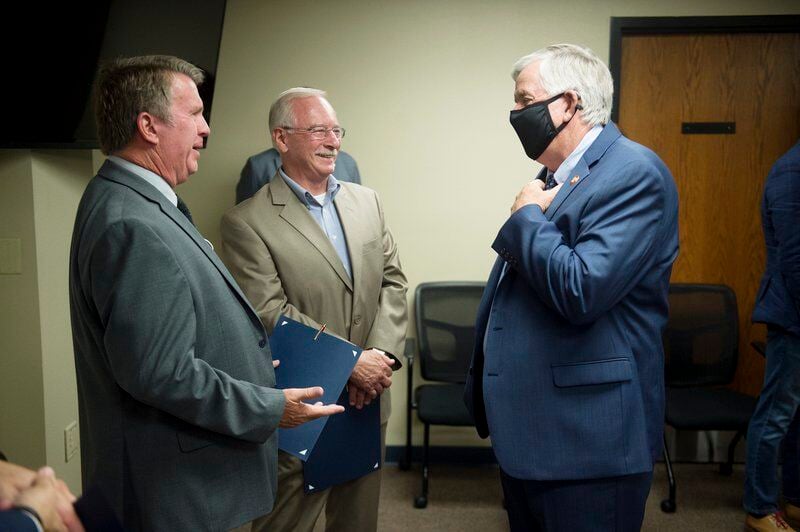 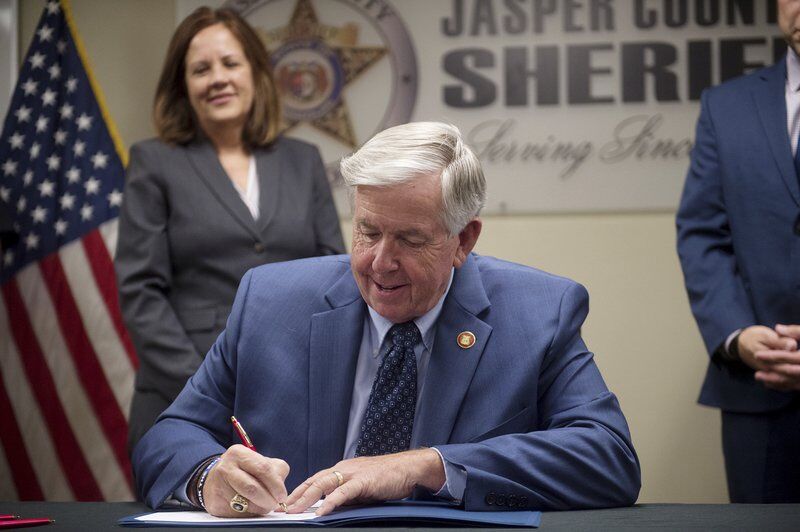 With an approving smile from Jasper County Prosecuting Attorney Theresa Kenney in the background, Missouri Gov. Mike Parson signs a witness protection plan bill on Monday at the Jasper County Sheriff's Department in Carthage. Kenney said the measure will provide the means to protect witnesses and bring wrongdoers to justice. GLOBE | ROGER HOMER

With an approving smile from Jasper County Prosecuting Attorney Theresa Kenney in the background, Missouri Gov. Mike Parson signs a witness protection plan bill on Monday at the Jasper County Sheriff's Department in Carthage. Kenney said the measure will provide the means to protect witnesses and bring wrongdoers to justice. GLOBE | ROGER HOMER

CARTHAGE, Mo. — Witnesses are key to most criminal prosecutions, but Jasper County Prosecutor Theresa Kenney said fear makes witnesses reluctant to appear for hearings — and if they don’t appear, she may have to dismiss an otherwise strong criminal case.

“Not a week goes by that I don’t have to dismiss a case because of a witness or a victim who is fearful of testifying against their perpetrator,” Kenney said Monday. “And hopefully this piece of legislation will provide additional funding so we can protect those witnesses and bring those wrongdoers to justice.”

The legislation was House Bill 66, passed at a recent special session of the Missouri Legislature.

Gov. Mike Parson on Monday came to Carthage to sign the bill in front of about two dozen lawmakers, law enforcement officers and others at a news conference at the Jasper County Sheriff’s Department.

Parson said House Bill 66 creates a state witness protection program, similar to the federal program, to give law officers and prosecutors another tool to help them convict violent offenders.

“I work with the mayors of St; Louis, Kansas City, Columbia, Springfield, Joplin, from many, many different areas of the state, and the prosecutors, all the law enforcement officers in the state, and the No. 1 priority out of all those meetings was the witness protection plan,” Parson said. “That was a priority, and to be able to get that done in special session, at a time when we really need it, is big.”

Program with no money

Rep. Cody Smith, R-Carthage and the House Budget Committee chairman, said the bill authorizes the Department of Public Safety to create the program, but lawmakers still have to find the state money to fund it.

The bill creates a way for local prosecutors and law enforcement agencies to apply to the state for money to pay to protect witnesses during the prosecution of cases. But state money will have to be appropriated at a later legislative session, either a special session in October or the regular session that starts in January 2021.

Rep. Peter Meredith, D-St. Louis, called the bill signing a “political stunt” because the bill doesn’t include money to pay for it.

“Instead of actually taking action to keep communities safe, the governor is signing a law that is completely unfunded — and as a result it will do little to reduce crime,” Meredith said in a written statement. “The governor should have ensured the program was funded during the special session. The truth is the governor is more interested in photo-ops than doing the critical work to tackle the causes of crime.”

Parson said federal funds can help get the program off the ground until the Legislature can provide state money.

He said lawmakers have to return to Jefferson City in October for another special session to discuss a supplemental budget, and appropriating the money could be part of that agenda.

Smith said the governor recommended $1 million for the program in a combination of federal and state money in his budget for the current fiscal year, but the coronavirus pandemic forced the Legislature to strip out all money for new programs until the state better understood how the pandemic would affect state revenues.

“That was one of the items that went by the wayside then,” Smith said. “I anticipate the governor is going to recommend $1 million again, and it will be made up of a couple of different kinds of funds, federal funds that might be available for such use and potentially general revenue dollars, which would give the Department of Public Safety a little more flexibility in what types of scenarios they use this fund for.”

Smith said tax revenues are coming in better than lawmakers estimated in March.

“Revenue has been stronger than we would have anticipated from the sales tax particularly,” Smith said. “At the state level we’ve seen increased revenues over last year. Then income tax revenue was stronger than I would have predicted and has continued to be stronger. The thing I worry about is the revenues from tax liabilities for the last year are all pre-pandemic.”

Smith said he’s concerned that state revenues could still shrink as the nation works its way out of the pandemic-fueled recession.

“All that to say, it is certainly an appropriate time to spend carefully, so that's going to be part of the conversation,” Smith said. “How highly do we prioritize this and how much do we want to spend on this now? The availability of federal funds will help alleviate that burden on state revenues with this witness protection program.”