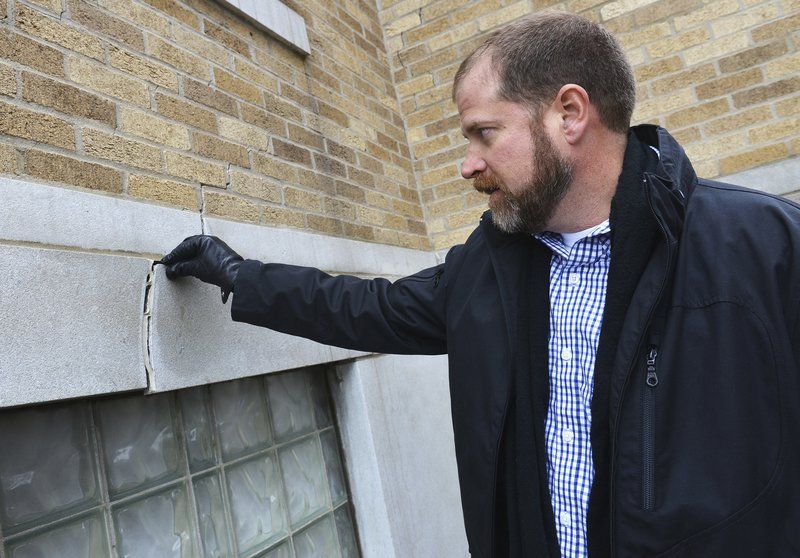 Chad Greer, an architect with Corner Greer and Associates, talks about some of the cracks found at Joplin’s Memorial Hall. A local arts group plans to raise $65,000 to study whether the hall could be adapted or replaced as a stage for cultural arts. Globe | Roger Nomer 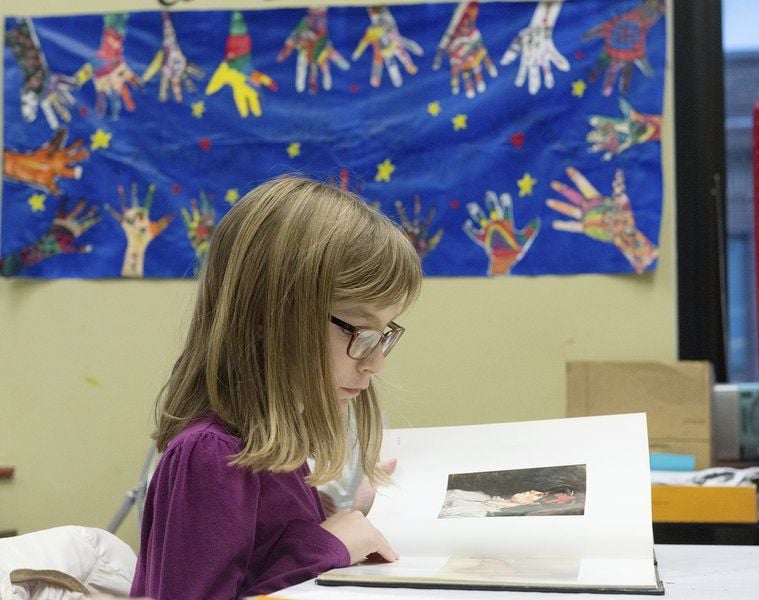 Eva Locher, 9, looks for inspiration in an art book during a class at Spiva Center for the Arts on Thursday.Globe| Roger Nomer 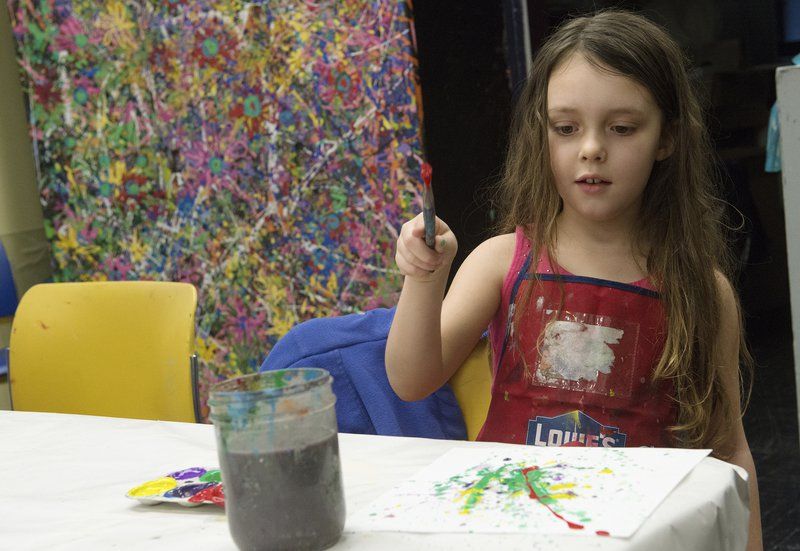 Rayna Wiebelhaus, 6, splatter paints as she makes a snowflake during a class at the Spiva Center for the Arts on Thursday. A proposed study would look at the potential for Memorial Hall to become a new home for the center.Globe | Roger Nomer

Chad Greer, an architect with Corner Greer and Associates, talks about some of the cracks found at Joplin’s Memorial Hall. A local arts group plans to raise $65,000 to study whether the hall could be adapted or replaced as a stage for cultural arts. Globe | Roger Nomer

Eva Locher, 9, looks for inspiration in an art book during a class at Spiva Center for the Arts on Thursday.Globe| Roger Nomer

Rayna Wiebelhaus, 6, splatter paints as she makes a snowflake during a class at the Spiva Center for the Arts on Thursday. A proposed study would look at the potential for Memorial Hall to become a new home for the center.Globe | Roger Nomer

A downtown Joplin landmark faces an uncertain future as it approaches a century of service.

With the city flummoxed at what to do with the 91-year-old Memorial Hall, advocates of local arts and downtown organizations will work with city staff to look at possibilities for refitting the hall, or at least its location, for a new era of service.

Connect2Culture, a local arts nonprofit, has set about raising $65,000 to study whether Joplin’s Memorial Hall, built in 1923, could be adapted or replaced as a stage for cultural arts.

While Joplin Mayor Mike Seibert says that might be a good fit for its use, one of the proposal’s beneficiaries says that the question of whether it would be a benefit will be in the details. The concept has not exactly passed muster with local veterans, though a spokesman said they are not against exploring some ideas.

Clifford Wert, co-vice president of the arts group Connect2Culture, recently received City Council approval to conduct the study. That study will cost $65,000, and the arts group has launched an effort to collect donations for the work.

Wert said the intention is to look at the potential for the hall to become a new home for the George A. Spiva Center for the Arts and for a 500-seat proscenium theater for Pro Musica and other performance groups, along with offices for arts organizations and other purposes. Those other uses, he said, could include community events, and a site for corporate training and educational events.

The study will be twofold. It will look at the costs, advantages and disadvantages of expanding and remodeling the building to serve those purposes. It also will examine whether the building should be razed and a new one constructed. City staff will look into whether any of the city’s $158 million in disaster recovery Community Development Block Grant money could be used toward paying for either of those options.

The original Route 66 passed by the hall on what is now West Seventh Street.

The city has struggled for a decade or more to decide what to do with the hall, which became too small and antiquated for most commercial performances.

The mayor said the city spends more than $200,000 a year to cover utilities and routine maintenance.

After leasing it for three years to the Joplin School District to use for gym and band classes, the city is now using it for some parks and recreation classes, “but it’s definitely not sustaining the expense that we’re incurring each month,” the mayor said.

Several years ago, the building developed cracks on the northeast corner that has affected both the interior and exterior. Its front ramp is eroding and pulling away from the building.

While the city has delayed repairs, believing they would cost more than $1.2 million, Connect2Culture has an initial opinion from professionals that the repairs would be less costly.

A letter from Chad Greer, an architect with Corner Greer and Associates, Neil Tappana, with Tappana Ondrick Structural Engineers, and Bennie Crossland, with Crossland Construction Co., states that “with careful planning and further analysis, we believe that a reasonable solution for correcting the damaged portion of Memorial Hall is possible.”

They do not say how much the solution would cost.

One group that supports the effort and envisions the hall as a home is Pro Musica, which has no permanent site and holds its concerts in churches and at different places on the campus of Missouri Southern State University.

“Our thought is having a 500-seat theater that is acoustically excellent and state of the art that would welcome the community to Pro Musica events,” said Alex Curchin, treasurer. “We’ve been presenting chamber music concert series for 30 years, and the church venues have been wonderful. But I think it might help in the future to have a place where Pro Musica events are held” consistently for public convenience.

Jo Mueller, director of the Spiva Center for the Arts, said the gallery has adapted a former commercial building that has no loading dock and little space for the large trucks that deliver exhibits to maneuver. Its lighting system needs updated and the gallery has no environmental controls for humidity, temperature and lighting that are required to land Smithsonian traveling exhibits and others of that caliber. A lack of storage space results in exhibit pallets being arranged in the gallery’s windows as if they were art pieces.

The suitability of Memorial Hall will be determined as the study unfolds.

“Whether this plan would work for us or not depends on whether we can get that state-of-the-art facility,” she said.

Memorial Hall was dedicated as a convention center when it was built after veterans of World War I got behind the push for it. Because of the veterans’ help in getting voters to approve a sales tax to build it, they were allowed by the city to name the building “Memorial Hall” and to erect memorials to those killed in wars.

Howard Spiva, commander of the Robert S. Thurman Post of the American Legion, has supported retention of the hall to its dedicated purpose as a convention center. While the arts group has pledged to protect the memorial plaques, statues and purpose of the building, the idea of tearing it down does not pass muster with Spiva.

While Spiva says he does not oppose the study or the cultural arts, “I don’t want to see a brown hole at Eighth and Joplin where the veterans worked theirselves to death to create a building and a convention center,” Spiva said.

In June, the city’s parks director, Chris Cotten, proposed enlarging Memorial Hall as a community center and convention center. He suggested exploration of an idea to erect an arena next to the hall or building a convention hotel there.

“There’s been all kinds of conversations about convention centers and all kinds of things that could go on that site, whether you keep the facade and expand it out, or you knock it down and put something else there,” the mayor said. “I think what I have realized is the fact that big investors for those types of convention centers, their eyes are not looking toward the center of Joplin for a facility like that. They are looking for something down that I-44 corridor.”

Use of the downtown location as a performance theater and gallery might be more attractive to investors, Seibert said.

“It is an appropriate expectation of people who would invest in that type of facility and that type of venture as opposed to what we’ve come up against when we have said, ‘Let’s have a 5,000- or 10,000-seat auditorium.’ It’s a better fit.”

Contributions for the arts study of Memorial Hall can be sent to 407 Pennsylvania Ave., Joplin, MO 64801. Checks should be made out to Memorial Hall study.

JOPLIN, MO - Kenneth W. Turner Jr., 58, a diesel mechanic, passed away Wednesday, April 14, 2021. A celebration of life will be at a later date. Arrangements under the direction of Ozark Memorial Park Crematory, Joplin.