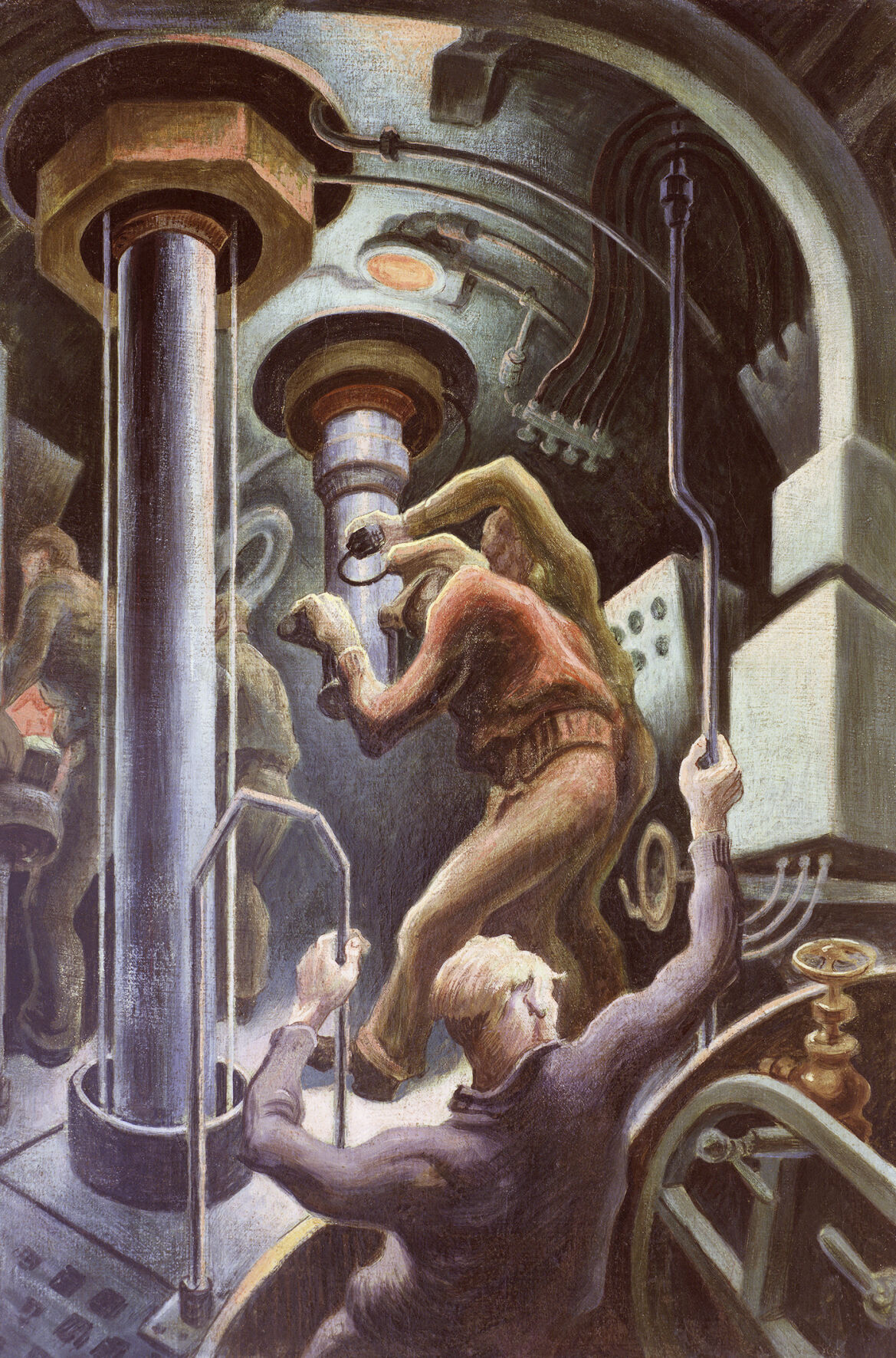 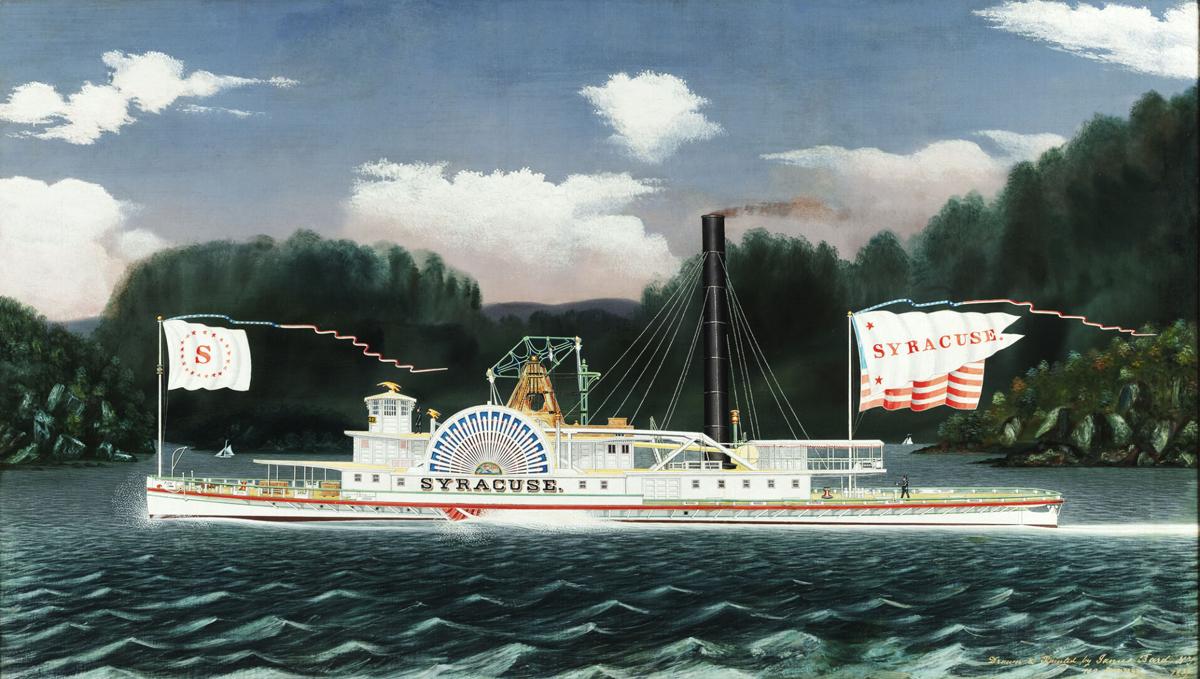 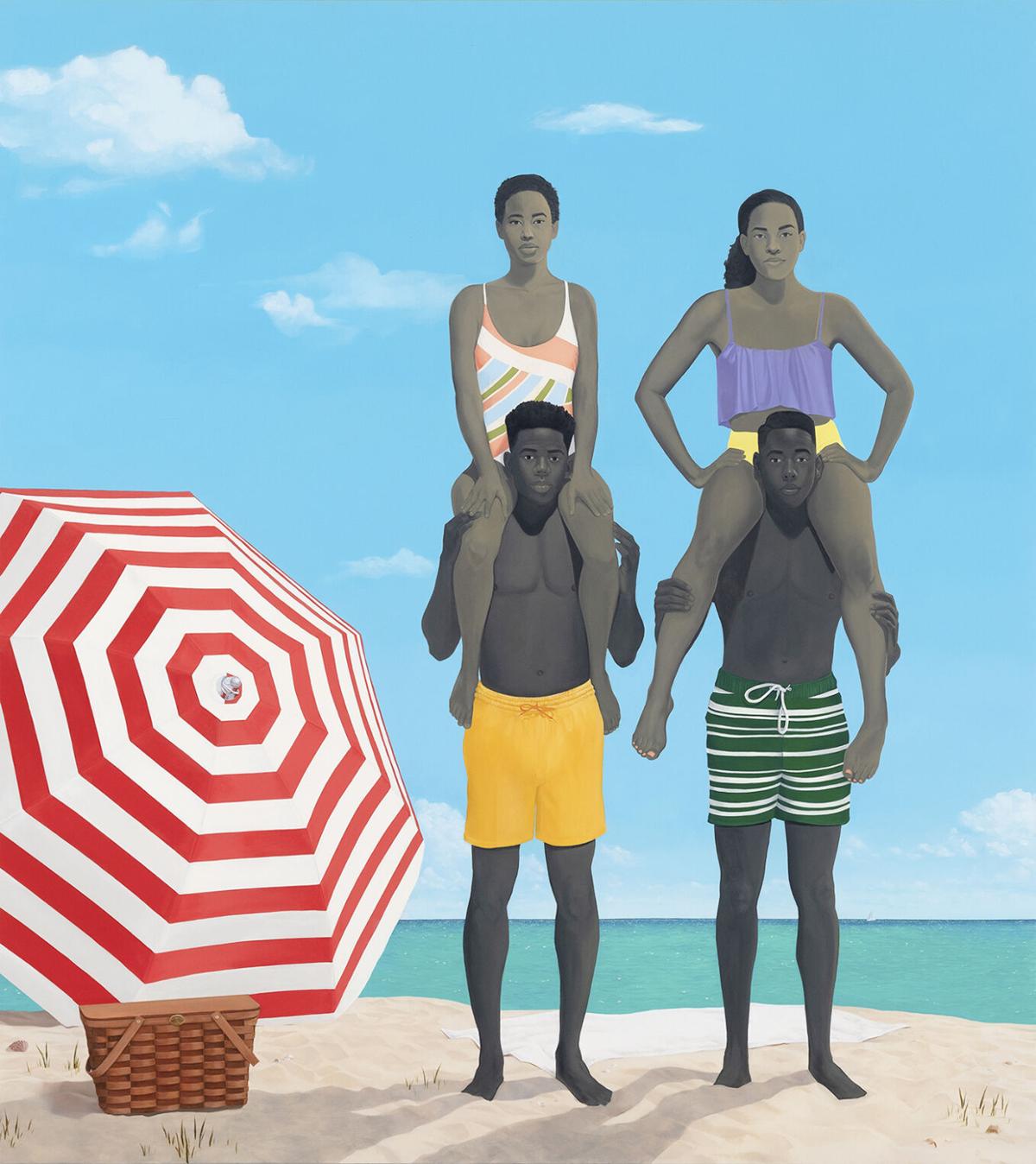 “‘In American Waters’ gives us an opportunity to explore how water plays a dynamic role in our lives and how artists explore ways to depict nature and humanity in relation to this precious resource; water is something that is near and dear to us at Crystal Bridges, a museum designed in relationship to, and surrounded by, the waters of Northwest Arkansas,” said Rod Bigelow, executive director and chief diversity and inclusion officer, in a statement. “Through this exhibition, we are able to reexamine American history, life on our rivers, lakes and streams, and the power of the ocean through the work of a diverse range of artists.”

Included in the exhibit is Benton’s “Up Periscope.” Painted in 1944, the work depicts U.S. Navy officers on a submarine, with one officer scanning the horizon with the periscope.

Benton enlisted in the Navy after World War I and was tasked with painting ships entering the harbor to document their camouflage schemes, according to the Chrysler Museum of Art in Norfolk, Virginia, the city where the artist had been stationed. After the attack on Pearl Harbor in 1941, Benton painted a series of works depicting wartime life, many of which were ultimately donated to the United States Naval History and Heritage Command.

A more contemporary piece included in the exhibition is Amy Sherald’s 2019 “Precious jewels by the sea,” which shows four Black teenagers at the beach. It represents “American narratives about American people,” the artist and the museum said.

A number of special activities also are available as part of the exhibition. They include:

• The logbook. Visitors are invited to sign their names and hometowns in a logbook near the entry doors, evoking the old passenger manifests that documented travelers aboard ships or arriving in U.S. ports.

• A sailboat diagram that offers viewers a quick orientation to several nautical terms used in the exhibition, including types of ships referenced.

• A panel with a map to show the influence of immigration to U.S. ports from countries in Europe.

• The sounds of popular sea shanties, or sailor work songs, and how they transformed into cowboy songs of the Western prairies.

• A touchable painting inspired by William Trost Richards’ “Along the Shore.”

• A self-guided tour of objects on view in the Crystal Bridges collection that focus on marine and water themes.

“In American Waters” debuted at the Peabody Essex Museum in Salem, Massachusetts, in May before arriving at Crystal Bridges. It is sponsored at Crystal Bridges by Bob and Becky Alexander, Harrison and Rhonda French family, Marybeth and Micky Mayfield, Sue and Charles Redfield, Jeff and Sarah Teague | Citizens Bank, and James Zigras.

"In American Waters: The Sea in American Painting" will be available for viewing at Crystal Bridges Museum of American Art through Jan. 31. Tickets are $12 for adults and free for museum members, SNAP participants, veterans and children 18 and younger.

Crystal Bridges requires all visitors and staff to wear a face covering indoors and while attending outdoor programs, except while eating or drinking. Masks will be available upon entry for those who do not have one.