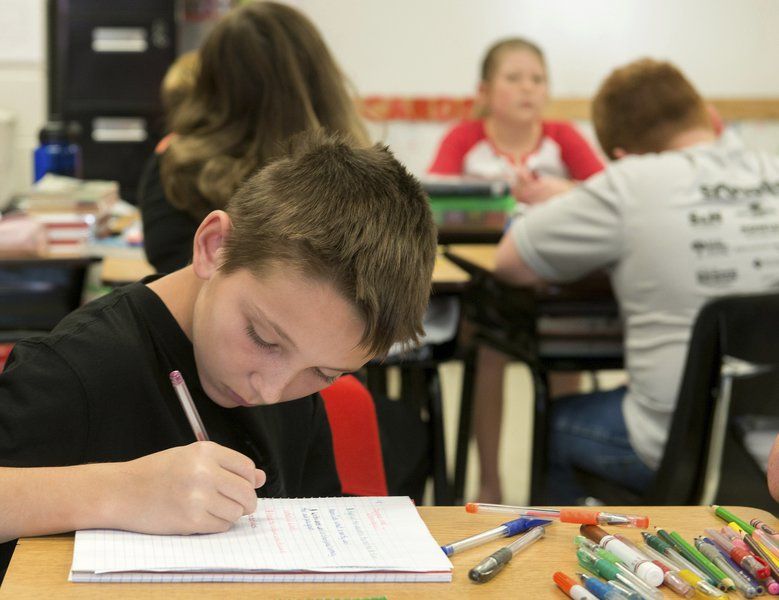 Caleb Washan, a sixth-grader, uses colorful pens to take notes last week in English class at Miller Elementary. Miller is one of three Southwest Missouri school districts that this fall will shift to a four-day school week from a traditional five-day-per-week calendar. Pierce City and Stockton are the other two.  Globe | Roger Nomer 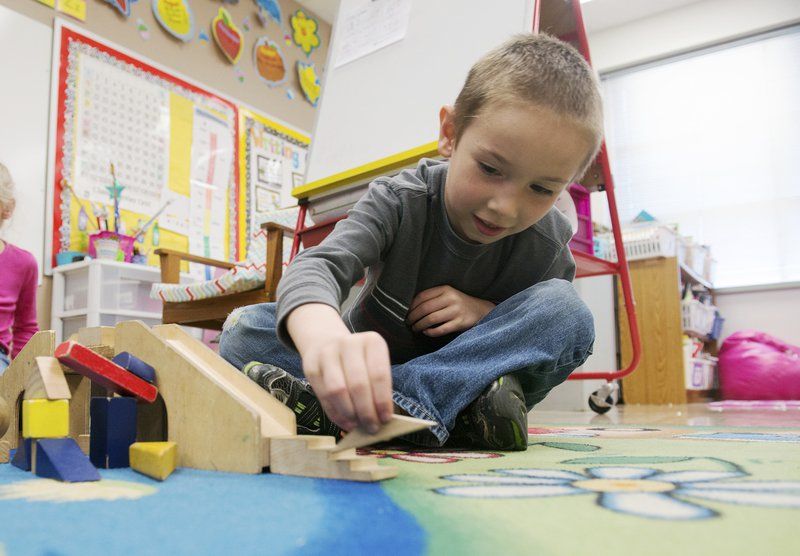 Collin Hansen shows off his engineering aptitude last week as he plays with blocks in kindergarten at Miller Elementary. Miller administrators say teacher retention is among the top reasons for a plan to try a four-day school week.  Globe | Roger Nomer

Caleb Washan, a sixth-grader, uses colorful pens to take notes last week in English class at Miller Elementary. Miller is one of three Southwest Missouri school districts that this fall will shift to a four-day school week from a traditional five-day-per-week calendar. Pierce City and Stockton are the other two.  Globe | Roger Nomer

Collin Hansen shows off his engineering aptitude last week as he plays with blocks in kindergarten at Miller Elementary. Miller administrators say teacher retention is among the top reasons for a plan to try a four-day school week.  Globe | Roger Nomer

MILLER, Mo. — As Jessica Hylton prepares to enter her senior year at Miller High School in August, she said having one day away from school each week could be hugely beneficial.

She could visit colleges and universities on a weekday without having to miss class, for example. She could use the free day to get caught up on homework in her college-prep courses, or perhaps spend the day working if she wanted to get a job for a little extra cash.

"It would give you an extra day to get things done," she said. "I like everything about it."

Such a calendar, rarely used in school districts across the state, is coming to three Southwest Missouri districts by the fall. Miller, Pierce City and Stockton are among the latest districts in Missouri to move to a four-day school week from a traditional five-day-per-week calendar.

Small, rural school districts are often attracted to the four-day school week for the potential of financial savings as a result of reduced transportation, heating and staffing costs, according to the National Conference of State Legislatures. Supporters of the condensed schedule typically like the ideas of improved staff morale, increased student attendance and an open weekday for appointments and other errands; opponents fear it leads to exhausting class days, difficulties in finding day care for an additional day each week and a learning regression because of longer weekends.

The option became available to school districts in Missouri after the economic recession of 2008, when the General Assembly passed legislation allowing schools to tweak their calendars, said Roger Dorson, coordinator of school, administrative and financial services for the Department of Elementary and Secondary Education.

"I think the intent of the sponsor was to provide a means for school districts to maybe help them out economically, maybe conserve some resources," he said. "I think the idea behind it is if you operate a four-day week, there are some savings that could be realized."

It's not clear what cost savings school districts can expect by switching to a shortened week, as total savings — accumulated from reductions in services such as transportation, maintenance and food — would be largely dependent on the varied needs and expenses of each district. But a 2011 report from the Denver-based Education Commission of the States suggests that actual savings for any given school district could range between 0.4 percent and 2.5 percent of its budget, with maximum savings as high as 5.43 percent.

The report also noted that it had found no school district that switched to a four-day week and subsequently reduced teachers' salaries and benefits, which is often one of the biggest expenses of a district.

In Miller, a Lawrence County school district with more than 500 pupils, the calendar for the next two academic years will feature the four-day week. Classes will be held Tuesday through Friday, and the school day will be lengthened by 27 minutes; the number of instructional hours for students will remain the same in the new calendar as in the current calendar, Superintendent Tracey Hankins said.

The move to the shortened week is an attempt primarily to attract and retain teachers, the superintendent said. The district has seen a decline in revenue in recent years, and options for increasing teachers' salaries and benefits have been limited, she said.

"We see teachers who come and stay a few years and leave for other districts because those districts pay more," she said.

The four-day week, to which the Board of Education has committed for the next two years, is expected to save the district approximately $165,000 from reduced costs for transportation, food services, health care and utilities, Hankins said. Those funds could be redirected to keep teachers' salaries competitive, she said.

That focus is one reason why Sophia Lewton, a sixth-grade math and science teacher at Miller Elementary School, looks forward to the calendar switch.

"This is a nice selling point to get teachers to stay here," she said.

Lewton said the four-day week could also save money for teachers who commute to the rural school district from as far away as Springfield, Carthage or Joplin. Although she lives in Miller now, she commuted to the school from west Springfield for the first five years of her career there, she said.

As for Mondays, they could become days in which teachers and parents schedule much-needed doctor or dentist appointments, or in which teachers could visit other school districts for assistance as they launch a one-to-one technology initiative, she said.

But making the switch down to four school days per week won't come naturally, Lewton said. She said she and her colleagues will have to work a bit harder this summer to transition their lesson plans to fit the new schedule.

"My instructional blocks are going to be longer, so whatever the lesson is, I'll have more time to make it productive and meaningful," she said. "I think that first month (in August) is going to be a big adjustment, but I think that it will be worth it in the long run."

Hylton, the high school junior who is involved in activities such as cheerleading, the A+ program and Future Farmers of America, said she thinks the transition will be easier than expected.

"We already have four-day weeks about once a month (during the week of Good Friday, for example), so I think it'll be OK," she said. "I mean, we don't come back from those freaking out."

The Stockton School District, which enrolls about 1,000 students in Cedar County, will also move to a Tuesday-through-Friday week next year, eliminating its half-day Wednesdays and requiring teachers to use two Mondays per month for professional development.

In addition to increased attendance and savings in transportation costs, district officials hope that the new schedule will be beneficial to teachers, Superintendent Shannon Snow said. Non-classified staff, such as kitchen cooks, custodians and bus drivers, will not see their hours cut as a result of the four-day week, although their schedules might shift, she said.

"We feel like this is an investment in our teachers, that the more prepared and professionally developed they are, the more impact they're going to make in the classroom," she said. "That will translate into a lot of learning for students."

The Pierce City calendar, which was approved by the Board of Education in February, will feature a school week that runs from 8 a.m. to 3:45 p.m. Tuesday through Friday. It contains 153 attendance days for students and 165 contract days for faculty and staff, who will be required to attend a scheduled work day or professional development day on one Monday during most months of the academic year.

Superintendent Russ Moreland said the district, which enrolls about 650 students, will make the switch based on anticipated positive outcomes such as increased student and staff attendance, more professional development days and long weekends to help students return to school more refreshed. Like the other districts, Pierce City hopes the four-day week will help retain teachers, he said.

"We're never going to set the world on fire with teacher pay, so we're constantly looking at what else can we do to keep our teachers here," he said.

Moreland said the district is working to address some parents' concerns about how young pupils, particularly kindergartners and first-graders, would be affected by a longer school day and how older students would find time for sports practice and other extra-curricular activities. For the youngsters, additional recess or break times could be incorporated into the afternoons, while high school coaches and club sponsors would work to keep activities on a reasonable schedule, he said.

Only a handful of the 520 school districts across the state, including Lathrop, Everton, Albany, Maries County and Montgomery County, currently have a calendar with a four-day week, according to the Missouri Department of Elementary and Secondary Education.