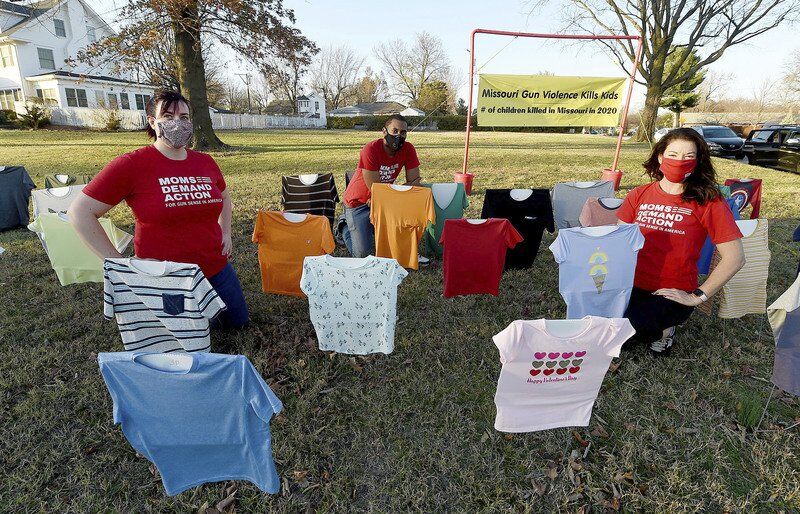 Joplin members of Moms Demand Action for Gun Sense in America (from left) Amanda Dickerson, Louis Morgan and Jennifer Jones kneel among 44 T-shirts representing Missouri children who have been killed by gun violence so far this year in Missouri. The memorial is located at 15th Street and Texas Avenue. Globe | Laurie Sisk 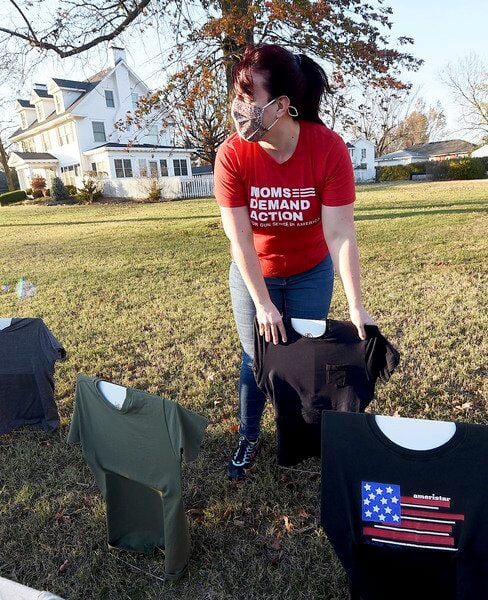 Amanda Dickerson on Thursday afternoon places a T-shirt memorializing one of the most recent child victims of gun violence in Missouri as part of a memorial at Texas Avenue and 15th Street. So far this year, 44 Missouri children have lost their lives to gun violence. GLOBE | LAURIE SISK

With gun violence on the rise in St. Louis, Kansas City and Springfield in recent years, Missouri gun safety advocates are calling attention to the issue with a traveling memorial display to visually represent the number of children killed by guns in 2020.

Gun violence has taken 44 children’s lives this year in Missouri, with roughly half of those deaths taking place in St. Louis.

Joplin Moms Demand Action for Gun Sense in America, a grassroots movement aimed at raising awareness for public safety measures that can protect people from gun violence, is sponsoring a local gun violence memorial in a joint partnership with the Springfield group. The group's memorial T-shirts can be found in a residential yard at the corner of East 15th Street and Texas Avenue in Joplin.

Firearm-related injuries are among the top five leading causes of death for people ages 1 to 64 in the U.S., according to the Centers for Disease Control and Prevention.

The memorial features dozens of colorful youth T-shirts remembering the 44 children in Missouri who have been killed by guns and was installed on Nov. 14. It will stay on display for one more day before traveling elsewhere.

“We really want the public to have a visual image to what gun violence does to our community, especially to our children and young people,” said Joplin group spokesman Louis Morgan about the memorial. “We want people to know that each of these deaths are avoidable.”

“I think that it’s easier to brush off the amount of kids who are hurt and injured when you can’t physically see them in person,” Dickerson said. “This gives people a better idea of the sense of the problem because you can talk statistics to them all you want, but until they see it in person, it really doesn’t resonate with them.”

Missouri has one of the highest rates of gun-related deaths in the country with an average death rate of 21.5 per 100,000 people, according to 2018 firearm mortality data from the CDC.

St. Louis is among a handful of cities where federal agents were sent this summer to help fight gun violence, part of a program called Operation LeGend, named after a 4-year-old Kansas City boy who was shot and killed while sleeping in his father’s apartment on June 29. The task force has sent more than 1,000 agents from several federal law enforcement agencies to cities that have high crime rates.

“Places like St. Louis, you’re going to hear a lot of city gun violence, and in Joplin, you’re going to hear a lot about of unintentional injuries and shootings, rising suicide rates,” she said. “Because here, we don’t have city gun violence, but we do have a lot of unsafe storage, so we’re getting children who are injured unintentionally by a family member or a friend. We also have teens who choose firearms as a method of suicide, which is irreversible. If something is 90% fatal, that doesn’t give me as a pediatrician a chance to intervene.”

Jennifer Jones, a Joplin Moms Demand Action member, said she would like to see more state enforcement of federal gun laws that are already in place like background checks and keeping guns out of the hands of violent offenders.

“Our group is trying to have discussions on different issues like domestic violence, safe (gun) storage, suicide rates, and trying to curb these numbers,” Morgan said.

Anyone interested in joining the Joplin Moms Demand Action for Gun Sense in America can text the word "Ready" to 64433 to enroll for updates and information.