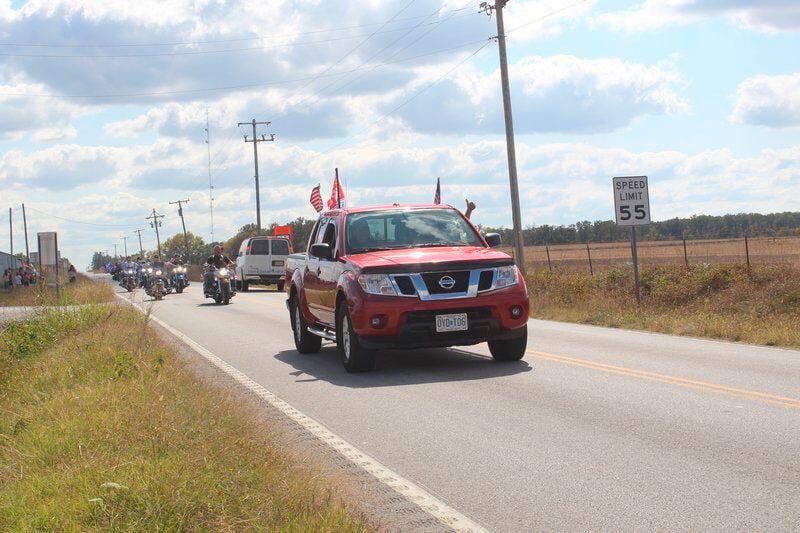 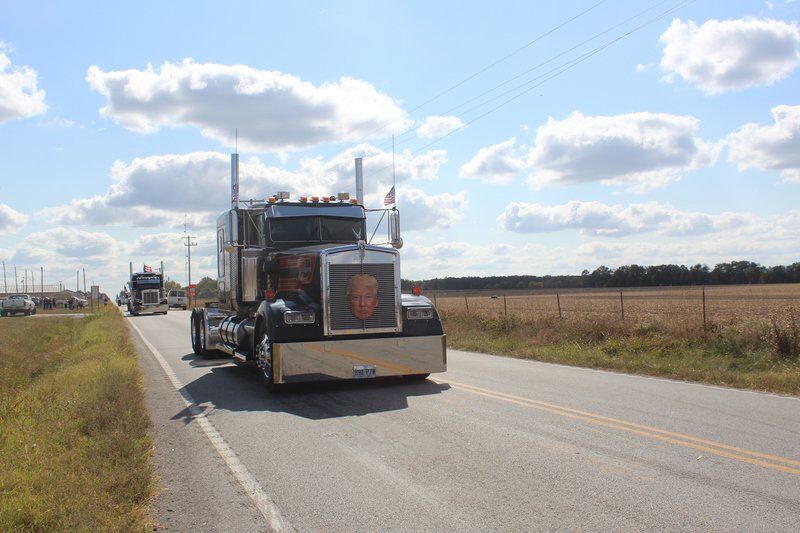 A supporter drives his 18-wheeler in the parade with a stern image of President Donald Trump pasted to the grill. Globe | Kevin McClintock 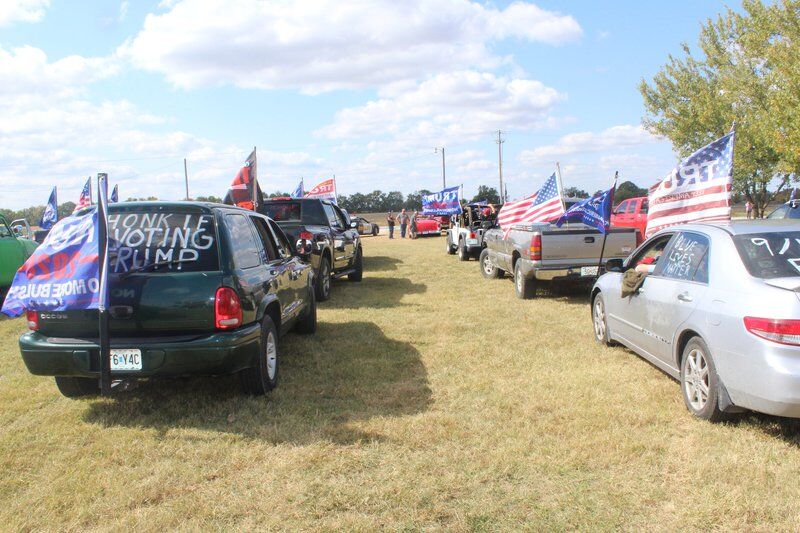 Vehicles of all shapes and sizes — flying a wide assortment of pro-Trump flags and conservative messages — line up just minutes before the parade celebrating President Donald Trump hits the road. Globe | Kevin McClintock

A supporter drives his 18-wheeler in the parade with a stern image of President Donald Trump pasted to the grill. Globe | Kevin McClintock

Vehicles of all shapes and sizes — flying a wide assortment of pro-Trump flags and conservative messages — line up just minutes before the parade celebrating President Donald Trump hits the road. Globe | Kevin McClintock

AVILLA, Mo. — Republicans across the region gathered on their front lawns, in parking lots and on grassy hills on Saturday to show support for a parade in honor of President Donald Trump that rolled through Jasper, Lawrence and Newton counties.

Between 80 and 100 vehicles — including nearly a dozen Harley-Davidson motorcycles and two 18-wheelers — formed up at the old rodeo grounds just west of Avilla, at the intersection of Highways 96 and 37, before embarking on a two-hour route through Carthage, Diamond, Granby, Monett, Freistatt, Pierce City and Sarcoxie.

Nearly all the vehicles were flying an assortment of American flags or pro-Trump signs, with several trucks sporting messages supporting police officers nationwide and the Second Amendment. One car had a side profile of Trump stamped to its back window, making it appear as if the president himself was riding in the back seat. An 18-wheeler had Trump’s face attached to its front grille.

“Usually we do a lot of rallies and gatherings, but since the virus is affecting everybody, we thought this would be a better way through social distancing for everyone to still come together and throw their support behind the president,” said Janet Hornback, one of the parade’s organizers. “This is basically for camaraderie ... and to be a part of something.”

As vehicles turned off Highway 37 into the grounds, Hornback would meet them with whoops and waves. Most of the cars would honk back at her.

“It makes me happy to see so many happy people to be here for one purpose with smiles on their faces,” Hornback said. “Our country has some deep-rooted problems, and we need to learn to communicate without yelling, to learn and listen to what’s being said instead of just being quiet while waiting to reply.”

Buck Conway, who rode the 22 miles from his house in Mount Vernon to participate in the parade, said the purpose behind the rally wasn’t to show any animosity toward anyone else, particularly those who dislike Trump. In fact, organizers urged parade participants to avoid confrontations of any kind and to be professional and courteous at all times.

“There is no fighting and screaming and burning here,” he said, gesturing around at the collection of vehicles and people. “We’re all having a blast and supporting our candidate.”

Holding a blue Trump/Pence sign in her hands, standing near the Dollar General store parking lot off of Highway 96 just east of Kellogg Lake, Martha Cardwell smiled as the vehicles of the parade roared past. It was the first time the Carthage resident had come out to watch a Trump parade, and she felt it was important to show her support.

The Southwest Missouri Democrats will hold their 2020 Eleanor Roosevelt Days fundraiser virtually this year. The event will be Friday.

The emcee will be Melodee Colbert Kean, Joplin’s first Black mayor. A digital greeting will be made by Cori Bush, a Missouri congressional candidate for the 1st District. Also included in the evening’s festivities will be a new song by Ruell Chappell of the Ozark Mountain Daredevils, tunes from local artists, a silent auction and a presentation by Joplin resident Ann Leach.

Tickets for the event are available for a $15 donation to the Southwest Missouri Democrats. To purchase tickets, go to https://secure/actblue/com/donate/digitalerdays2020.