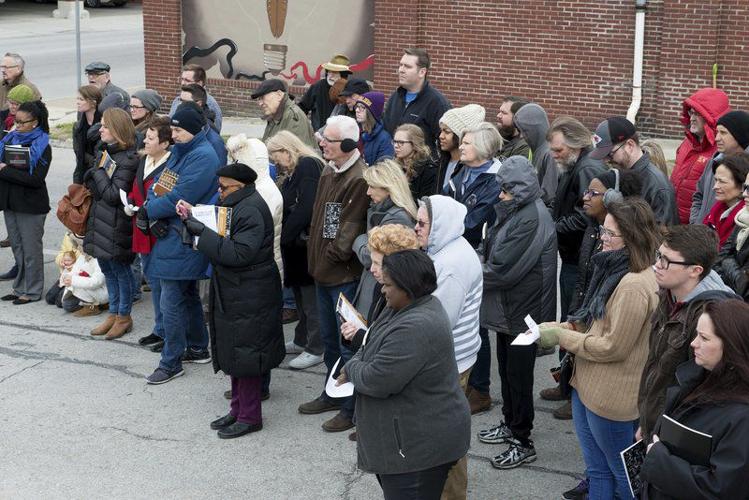 Dozens of people gathered on Sunday for a memorial service at the site in downtown Joplin where in 1903 a 20-year-old black man was lynched by a mob. Globe | Roger Nomer 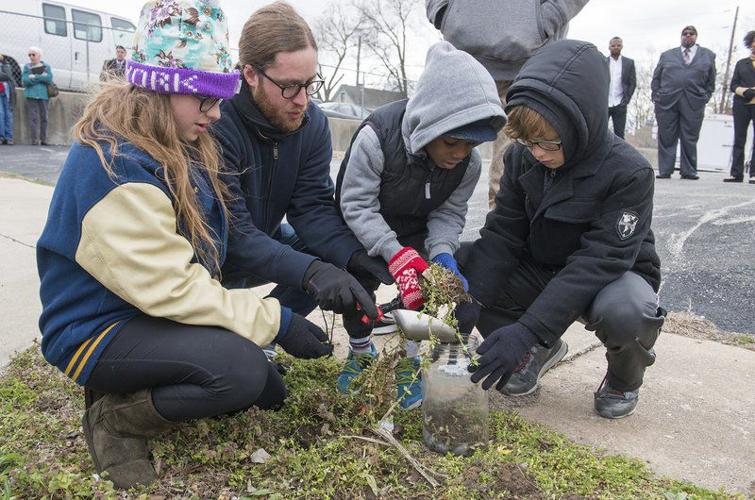 Paige (from left), Shane, Robert and Maddox Wood collect soil from the site of the 1903 lynching of Thomas Gilyard at Second Street and Wall Avenue during an event Sunday afternoon. Globe | Roger Nomer

Dozens of people gathered on Sunday for a memorial service at the site in downtown Joplin where in 1903 a 20-year-old black man was lynched by a mob. Globe | Roger Nomer

Paige (from left), Shane, Robert and Maddox Wood collect soil from the site of the 1903 lynching of Thomas Gilyard at Second Street and Wall Avenue during an event Sunday afternoon. Globe | Roger Nomer

Truth and reconciliation were what community members who gathered Sunday in Joplin were seeking, recalling the lynching of a black man in 1903.

About 50 people came to the memorial service at the corner of Second Street and Wall Avenue, where the lynching of Thomas Gilyard happened 115 years ago.

“It’s important for me to be here simply because I want to make sure that these things are talked about,” said Nanda Nunnelley, a member of the local Black Lives Matter group in Joplin. “Keeping it quiet hasn’t helped. We’ve got to talk about it and let it out.”

On April 15, 1903, Joplin police officers, including Theodore Leslie, 36, were searching nearby rail yards for a black man who had allegedly stolen pistols from a hardware store when Leslie noticed a man in one of the rail cars. Shots were fired, and Leslie, a father of four, was mortally wounded. Hundreds of men launched a search using bloodhounds. On April 16, a black man with a weapon, Thomas Gilyard, was arrested, and while he told one of the men involved in the arrest that he had been in the box car, he said several others had been there and that one of them fired the fatal shot.

Joplin City Attorney Perl Decker pleaded with the growing mob to break up, according to newspaper and other historical accounts, as did Mayor Thomas Cunningham, but the crowd soon stormed the jail and took Gilyard from his cell. He was lynched soon afterward.

"Had people spoken up and done something about it years ago, we wouldn’t have to be proclaiming Black Lives Matter now,” Nunnelley said.

As part of the event, people who attended the memorial picked up soil from the ground and filled it in jars that will be sent to Montgomery, Alabama, where a new museum will remember the more than 4,400 lynchings that took place across the country.

The exhibit, "The Legacy Museum: From Enslavement to Mass Incarceration,” is set to open on Thursday, April 26, and will include soil collected from lynching sites in Selma, Alabama; Austin, Texas; Chattanooga, Tennessee; LaGrange, Georgia; and many other places.

Kiara Boone, deputy program manager at Equal Justice Initiative, the nonprofit behind the exhibit, said the soil represents the blood, sweat and tears of those lynched and the terror the lynchings caused within the black community.

However, she said the soil also represents life and rebirth, and in this case it means reconciliation and healing.

“We can’t get away from our past,” Boone said. “We have to acknowledge the truth and understand it before we can move forward.”

A study conducted by the Equal Justice Initiative tallied 60 lynchings in Missouri, including three in Lawrence County, three in Greene County, one in Barry County and one in Jasper County between 1877 and 1950. Mississippi had the most reported lynchings of any state during that period with 654; in Arkansas, 492 black people were killed in acts of racial terror.

City Council member and former Mayor Melodee Colbert-Kean also spoke at Sunday's event, reminding people how important it is to be aware of all of Joplin’s history, the good and the bad.

She said that people are sometimes hesitant to talk about the lynchings or racial discrimination for fear that it will make the community look bad and stir up unwanted memories, but not talking can hinder moving forward and reconciliation.

“We can’t move forward if we can’t acknowledge our past sins,” Colbert-Kean said. “Just because some things aren’t talked about does not mean they’re not true or didn’t happen.”

The Equal Justice Initiative's National Memorial for Peace and Justice, which is set to open on April 26 in Montgomery, Alabama, will feature hundreds of columns — one for each county where a lynching took place. Identical columns will be placed in a nearby park in hopes that people from those counties will reclaim them for use as freestanding memorials.

Do you favor legalizing marijuana for recreational purposes for adults in Missouri?