Canada geese take flight over an area that is being developed as wetlands inside the Center Creek Wastewater Treatment Plant in Webb City on Tuesday. Globe | Laurie Sisk 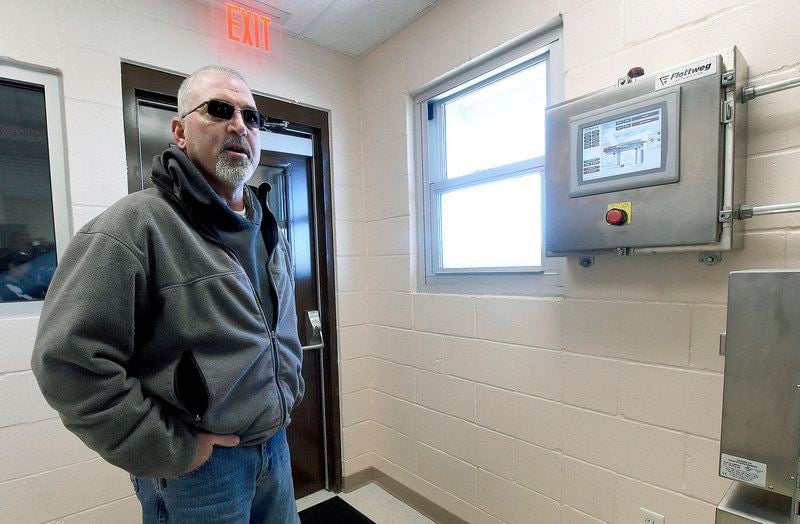 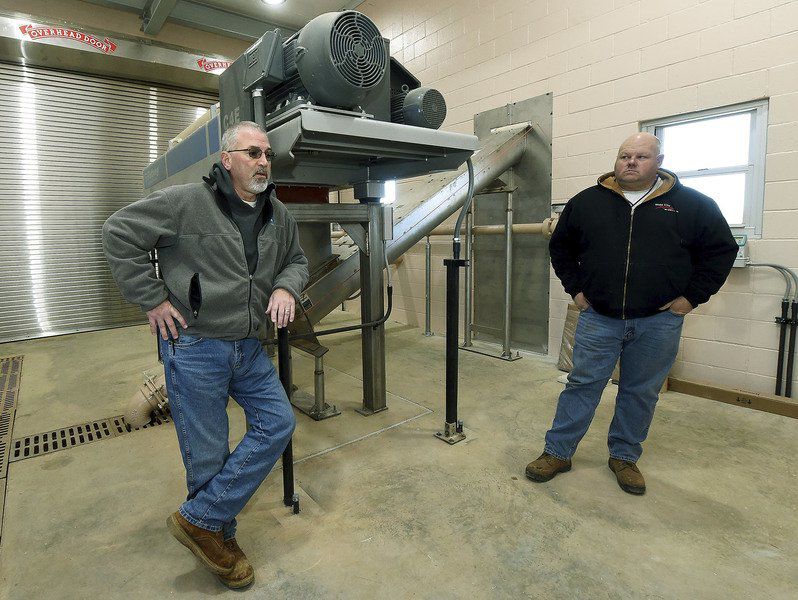 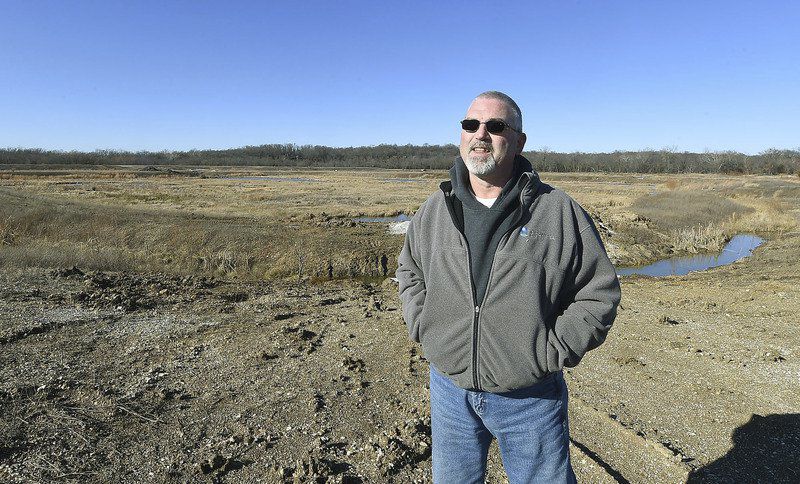 William Runkle, wastewater director, talks about an area being developed as wetlands inside the Center Creek Wastewater Treatment Plant in Webb City on Tuesday.Globe | Laurie Sisk 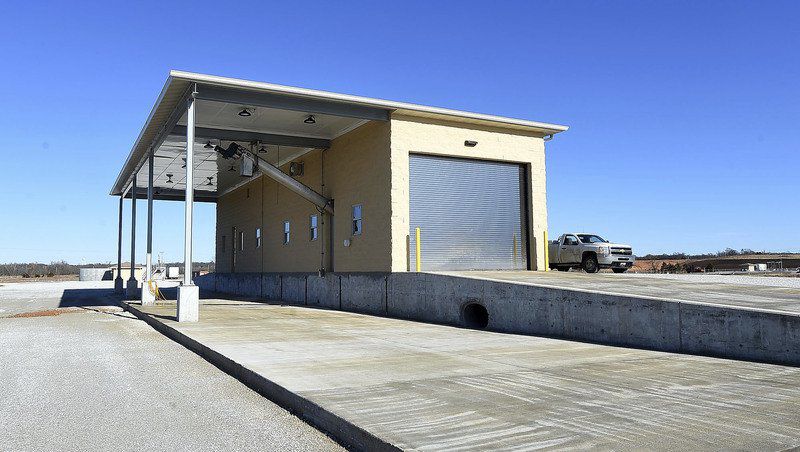 A new facility at the Center Creek Wastewater Treatment Plant houses a centrifuge that separates water from sludge in order to prepare it for composting. Globe | Laurie Sisk 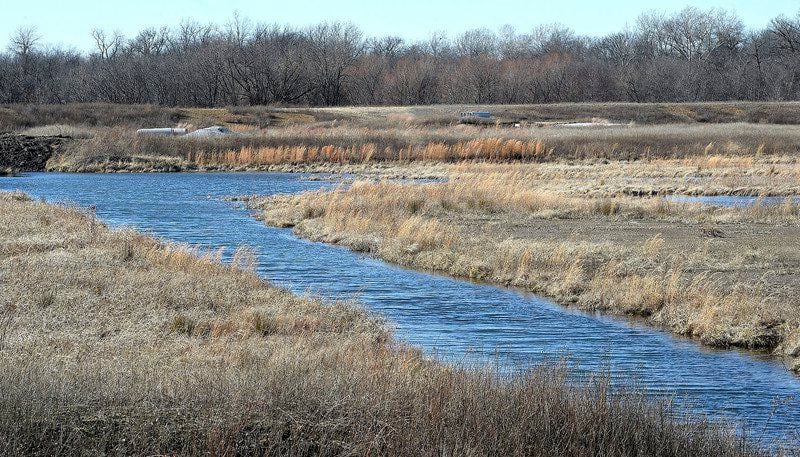 Water sits in trenches in an area being developed as wetlands on Tuesday at the Center Creek Wastewater Treatment Plant. Globe | Laurie Sisk

Canada geese take flight over an area that is being developed as wetlands inside the Center Creek Wastewater Treatment Plant in Webb City on Tuesday. Globe | Laurie Sisk

William Runkle, wastewater director, talks about an area being developed as wetlands inside the Center Creek Wastewater Treatment Plant in Webb City on Tuesday.Globe | Laurie Sisk

A new facility at the Center Creek Wastewater Treatment Plant houses a centrifuge that separates water from sludge in order to prepare it for composting. Globe | Laurie Sisk

Water sits in trenches in an area being developed as wetlands on Tuesday at the Center Creek Wastewater Treatment Plant. Globe | Laurie Sisk

WEBB CITY, Mo. — Webb City is nearly done with its estimated $3.2 million wastewater treatment plant upgrades in an effort not only to help the environment but also to save taxpayers’ money from being flushed down the toilet.

Carterville, Oronogo and Webb City share the same wastewater facility located at 2100 N. Madison, where the sewer system discharges in Center Creek. The facility is located in the Oronogo-Duenweg Mining Belt Superfund site, a 20-square-mile area near Joplin that was once home to mining, milling and smelting operations from the 1850s to the 1970s.

Webb City has been working with the U.S. Environmental Protection Agency, the Missouri Department of Natural Resources, and the U.S. Fish and Wildlife Service for several years to develop a long-range plan to reduce the amount of heavy metals flowing into Center Creek.

Municipalities in Southwest Missouri tend to experience high levels of zinc in their biosolids, or sludge, as a result of mining waste. Upgrades have been made to the Webb City plant over the past year to help with the cost associated with sludge removal.

“Zinc is the only heavy metal that’s above the limits of what our permit allows,” said William Runkle, Webb City’s wastewater director. “The zinc is naturally occurring in this area because all of the zinc mines and the groundwater, everything that goes on, leaches into our collection system, where it ends up here at the treatment plant.”

The plant now sports new equipment, such as a centrifuge to remove water from the zinc-laden sludge. The centrifuge is able to spin the biosolids at such a fast rate that it dewaters the sludge, almost like a washing machine. It can process up to 80 gallons of sludge per minute. The facility housing the centrifuge was also built with room for future expansion.

Because of the high levels of zinc, the sludge must be dried and mixed with materials such as wood chips, creating a topsoil that can be applied to former mining land remediated by the EPA.

“All of the tree limbs, leaves and grass clippings that years ago we used to pile up and burn, now we grind it up and mix it in with this,” said Josh Farley, Webb City’s wastewater superintendent. “We’re using manure from the Joplin Stockyards, and we’re getting food waste from Ajinomoto Foods in Carthage. They produce a tremendous amount of food waste that ends up in a landfill. We mix it in with our product and compost it out. It’s a great nutrient value for the soil amendments that we’re doing.”

Before the restoration project was implemented, Webb City was spending more than $500,000 per year to have the sludge taken to a special landfill in Lamar. On average, the city was producing 400 to 500 tons of sludge annually, which cost an estimated $1,100 per ton to remove.

“If you have too much of anything like zinc ... you have to take it to a landfill,” Runkle said. “We only had one choice in its present form, and that was to take it to a landfill. The yearly cost just wasn’t possible. This project was an extremely wise investment for the community and the taxpayers. We have a process that will be here within the next 20 to 25 years, potentially longer. It certainly won’t be cost-free, but nevertheless, your cost saving is tremendous.”

The composted materials have been used as soil in land remediation sites near the interchange just south of highways 249 and 171, as well as on a hilltop at the wastewater facility. The goal is to have the composting program in full swing in the coming months.

“You can see a definite contrast between what’s not done and what is,” Runkle said.

Runkle said the waste sludge disposal was the driving factor that helped lead to the creation of the Cardinal Valley Habitat Restoration Project, a primary restoration project involving the application of soil amendments to enhance and restore prairie and wetland habitats over 275 acres of land.

“We came up with an innovative way to start land-applying the waste sludge and getting rid of it that way,” Runkle said. “This is what spurred all of this other stuff like the wetlands. Now, we have this product, so where do we put it? That’s what led into the Cardinal Valley Habitat project where we could restore this mined land.”

Four wetland cells were constructed over 14 acres near the wastewater treatment plant through a cooperative agreement with the EPA.

The wetlands will serve as filtration systems, where nearby planted vegetation will absorb zinc concentrations before the water can flow into Center Creek. Control structures were recently added to the wetlands to monitor the amount of flow going into each cell.

“Those structures got done less than a month ago,” Runkle said. “We’re having to do some final cleanup.”

Runkle said the wetland areas will have roughly 3 to 4 feet of water in them when finished. The wetlands will also double as a restoration site with native grasses and plants to provide better habitat for wildlife. The wetlands could be fully functional by the spring.

“The cost of the project doesn’t really apply to the wetlands, although it’s going on at the same time everything else is,” Runkle said. “It’s currently considered a demonstration project with DNR. Basically over the next couple years, we’re going to do a lot of sampling and testing, essentially demonstrating to them that wetlands with particular vegetation planted in it can be a beneficial process to the treatment plant.”

The Center Creek 201 Wastewater Treatment Board approved a $2.75 million loan by the Missouri Department of Natural Resources last year to fund a majority of the project, with Webb City spending an additional $300,000 to cover remaining costs.