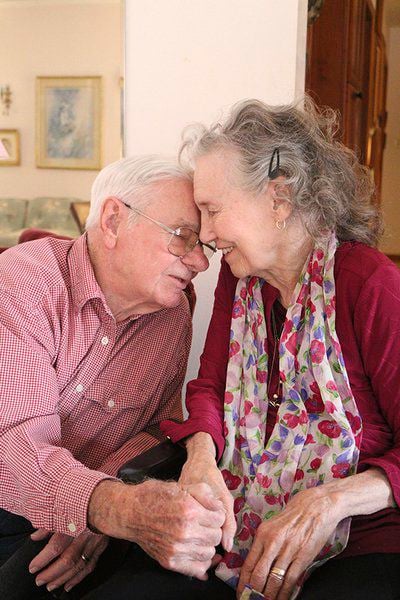 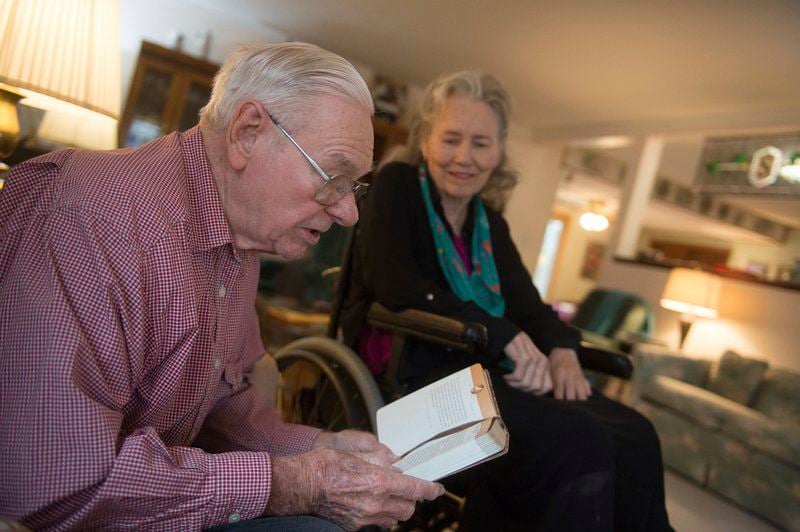 Every morning, Charles Surgi reads from an inspirational book to his wife, Carole, at their home in Webb City. They have been married for 60 years. GLOBE | ROGER NOMER

Every morning, Charles Surgi reads from an inspirational book to his wife, Carole, at their home in Webb City. They have been married for 60 years. GLOBE | ROGER NOMER

WEBB CITY, Mo. — Want to get married? With that simple question, Charles and Carole (Hall) Surgi set off on a six-decade adventure that has included four children, 10 grandchildren and four great-grandchildren.

Surrounded by friends and family, the couple will celebrate their 60th wedding anniversary on Saturday, Feb. 22, with an open house at their Webb City home.

Before they met, Carole, at age 20, was involved in a car accident while a student at the University of Arkansas in Fayetteville. With injuries that included a broken back, she was left paralyzed from the waist down.

She found herself at a crossroads with a life-defining choice: move home and live with her parents, or live her life as she had wanted to before the accident.

“My doctor was so wise," she said. "He told me, 'You are still the same person; you don’t have to change the way you're living. You can do anything you want to do, but do it sitting down.' So I took his advice.”

Carole switched her major from elementary education to speech therapy and transferred to the University of Illinois at Urbana-Champaign. After two years, she moved to Carthage and got a job at a bank before working for Tom Cusack, then the Jasper County auditor.

By then, it was spring of 1959, and Charles and friend Don Rodrick decided to take dates to the drive-in movie. It was the day he met Carole — but she was initially his friend's date.

“The Lord tapped me on the shoulder and said, 'You’re going to marry that girl,’” he said. “A year and a half later, I married her.”

For Charles, the decision to date Carole was easy. Her smile and personality were the first things he noticed about her, along with the fact that she was smart and easy to talk to, he said. The wheelchair and Carole’s paralysis never discouraged him from pursuing her as his bride.

In January 1960, the couple were sitting in the car after returning home from a political dinner in Springfield. Charles looked at Carole and simply said, “So, do you want to get married?”

They married on Feb. 24 at Sacred Heart Catholic Church in Webb City and returned to the Joplin area after a weeklong honeymoon in New Orleans.

“It was the smartest thing I ever did,” Carole said. “There was just something about him. I just knew he would be OK.”

In 1961, the couple built their home on North Main. Designed to accommodate Carole’s wheelchair, it included extra-wide hallways, extra-wide doors and accessible cabinetry in the kitchen. A self-described tinkerer, Charles said he found ways to help his wife be self-sufficient, including designing a pulley system for the clothesline and raised beds for her garden.

The couple added four children — Elizabeth, twins David and Diane, and Paul — within the first few years of their marriage. Charles worked for his family’s manufacturing business in Carl Junction and would come home for lunch each day to lend a hand as needed.

Cars equipped with hand controls would allow Carole to shuttle their children to and from appointments and to school each morning. When the children were older, Carole joined Charles at Surgi Manufacturing, doing the company’s books.

Now 86 and 87, Carole and Charles live in their home on Surgi Avenue near Stone’s Corner. After retiring at age 75 from the family manufacturing business, Charles has opened a flagpole and concrete vase business.

Charles said their children and their sense of humor have kept them together all these years. He also is known for his "10 rules to live by," some of which — including "hang in there" and "never go to bed angry" — have guided the couple's marriage.

They also believe their faith and the importance they placed on their wedding vows have bonded them for 60 years.

"We didn't keep (our vows) lightly," Carole said. "We always tried to set an example for the kids, just taking what we had, our lot in life and not sitting around and crying about it."

The 60th wedding celebration open house for Charles and Carole Surgi takes place from 1 to 4 p.m. Saturday, Feb. 22, at their home at 25035 Surgi Ave., Webb City.