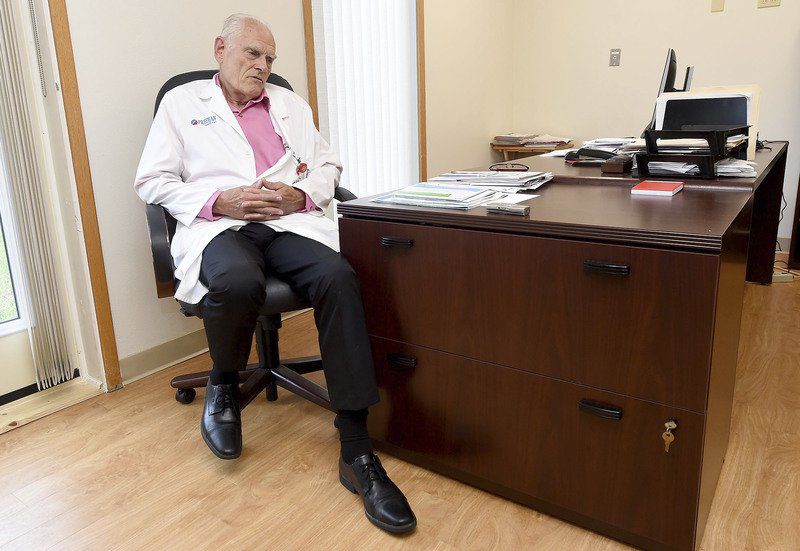 Dr. Uwe Schmidt shares his views on the future of COVID-19 on Thursday in his office at Freeman’s Infectious Disease Clinic. Globe | Laurie Sisk 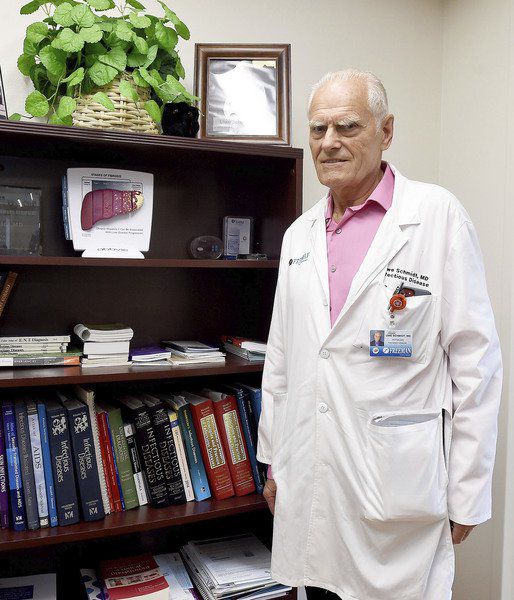 Dr. Uwe Schmidt shares his views on the future of COVID-19 on Thursday in his office at Freeman’s Infectious Disease Clinic. Globe | Laurie Sisk

At the moment, the coronavirus’ curve appears to have flattened nationwide, with the number of new cases declining after peaking in late April.

Through Friday, 36 states, including Missouri, have reopened for business, with another 11 ready to open by the end of this week. But nearly 40 million Americans have filed for jobless claims, with a recent Census Bureau showing 47% of American adults have said they or a member of their household has lost employment income since mid-March.

It will remain a delicate balance as cities, regions and states reopen in stages, placing safety first, while getting people back to work.

So where do we go from here?

The Joplin Globe recently spoke with three medical experts — two infectious disease doctors and an emergency physician who spent more than a month in a New York City hospital — about what might happen next in the Joplin area. All agreed that Southwest Missouri has managed to avoid a dangerous threat.

Missouri has reported 11,752 confirmed cases of COVID-19 and 676 deaths as of Saturday. Joplin and Jasper County, as well as the five surrounding Missouri counties, have recorded 74 cases and one death through Friday.

While Kansas City, St. Louis and Springfield were initially hit hard by the virus, Freeman Health System didn’t record a single positive case in a span of several weeks in April.

“It’s not completely gone,” said Dr. Uwe Schmidt, infectious disease specialist for Freeman, of the coronavirus. “Two days ago, there was still (a person) who had tested positive at a testing site. But before that, we hadn’t had any positive cases for quite a while.”

So what happened in Joplin? Why wasn’t it as bad as it was in New York? There was no community spread, said Dr. Erik Martin, who works at Freeman Urgent Care in Joplin and Webb City and emergency rooms at Mercy Lebanon and Cox Monett hospitals.

“It’s not as crowded, there are not as many people (here) and, perhaps most importantly, we became aware of it and enacted social distancing measures long before it got really bad,” he said.

The question that seems to be on most people’s minds has to do with the so-called second surge. Will a new round of deadly COVID-19 cases hit the region later this year?

Since Joplin began reopening on May 4, positive cases in Joplin and Jasper and Newton counties have risen by fewer than 20, though Joplin is surrounded by areas with far more positive cases. Ottawa and Delaware counties in Northeast Oklahoma reported 132 cases and 18 deaths, and 370 positive cases were reported as of Friday in the Northwest Arkansas counties of Benton and Washington.

In early April, Schmidt predicted the virus would peak nationwide in mid- to late April, and it did just that. Should a second surge occur, and he’s not convinced it will, it would be far smaller than the initial wave that swept over the country, he said.

“If we do get another outbreak, it won’t be as bad as in the past because more and more people will become immune all the time, getting what’s called herd immunity,” he said.

Herd immunity is the concept that at-risk individuals are protected from infection because they’re surrounded by immune individuals. Some experts say that for herd immunity to work effectively, 60% of the population needs to be immune.

“We are opening things up (and have not) seen any increase in cases,” Schmidt said. “There will be some cases here and there, just because we are doing much more testing than before, but the percentage of negative to positive tests” is growing wider with each passing day. Experts “predicted there would be another spike of (COVID) cases, and I predict they will be wrong again.”

Sleiman said it’s imperative that people continue to abide by all safety guidelines, which helped reduce the initial wave’s curve.

“People need to be careful because as we start moving and we go to places where there are higher numbers of COVID in the community, then we are at risk of exposing ourselves and bringing it back home,” she said. “So yes, absolutely, a second surge is to be expected.”

Severity of the surge

How severe that surge might be, Sleiman couldn’t guess.

“It will be hard to predict,” she said. “But hopefully, we will be ready for it.”

Martin agrees. What makes predictions concerning second surges difficult is that unlike New York City or Los Angeles, positive cases locally remain low. There simply haven’t been enough COVID-19 cases to predict what might happen down the road, he said. The good news is that should a hotspot erupt, state and federal help would be available, containing it and preventing its spread further afield, he said.

“There will likely be isolated hotspots in places with crowded conditions. We should watch these places closely,” he said. “We should have a plan in place now for what to do about this. What will we do if a factory or plant or meatpacking plant in the Joplin area gets hit? How will we test all the workers? Who will test them? How will we react? Do we have to close the whole city down if this happens or just the plant? Who will decide?”

All eyes turned last month to the state of Georgia, one of the first U.S. states to reopen after the national lockdown. Critics of the move predicted a second surge and hundreds of deaths, but nothing like that has happened so far.

All three experts said wearing masks and adhering to social distancing guidelines for the foreseeable future is important. Doing so has saved lives and prevented the spread of the virus to more rural areas of the country.

“It’s not gone,” Sleiman said of the coronavirus. “It’s still here, for sure. We are lucky in Joplin in that we haven’t had any new (spike) in cases, but people will be moving and traveling and will be bringing it back home — and that’s where we’ll need to be careful.”

“Shelter-in-place orders, closing schools, closing nonessential businesses, discouraging any kind of event where large numbers of people gathered together in crowded conditions — it worked,” he said. “Things slowed down. Right now, or at least when I left New York a week ago, it was just as slow as the (emergency rooms) had been in Missouri before I left.”

Martin said the coronavirus is deadlier than the flu, but it isn’t the deadliest virus to surface. Ebola killed approximately 90% of the people who contracted it, for example, while COVID-19 worldwide has killed about 5% of those who contract it.

Even so, the virus spreads through respiratory droplets — coughing, sneezing, droplets in breath. That’s why wearing a mask can be so important, Martin said.

“If everyone wore a mask, if everyone kept 6 feet apart, if everyone washed their hands, the virus would not be able to spread any more,” he said. “It’s really quite simple. Practice those simple steps, and you will protect yourself and others.”

Race for a vaccine

As far as a COVID-19 vaccine is concerned, both Schmidt and Sleiman said it will take time to find a safe and effective one.

But work to find one is well underway. The Trump administration has partnered with drugmaker AstraZeneca for at least 300 million doses of a coronavirus vaccine, currently under development by the University of Oxford, called AZD1222. There is hope the vaccine would be available for public distribution by the end of this year. Other vaccines are also in the works around the world.

“It’s not easy to determine which vaccine is going to work or not,” Sleiman said. “It’s easy to produce the molecule that’s the vaccine, but it’s not easy to say it’s going to be effective in protecting you from getting the infection. So that part of it takes time.”