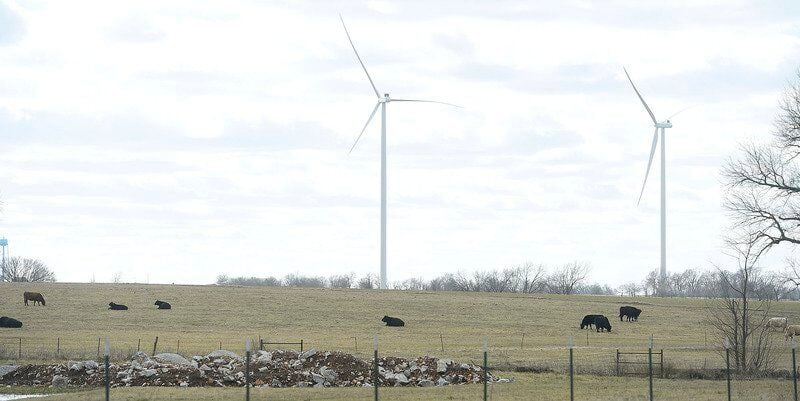 Cattle graze near two wind turbines last week at the Kings Point Wind Farm near Golden City. Liberty, the area producer of electricity, has two other wind farms under construction. One is the North Fork Ridge Wind Farm in Barton County, and the other is the Neosho Ridge Wind Farm north of Parsons, Kan. The North Fork Ridge farm is almost finished, and its turbines have been producing electricity since late last year. GLOBE | LAURIE SISK 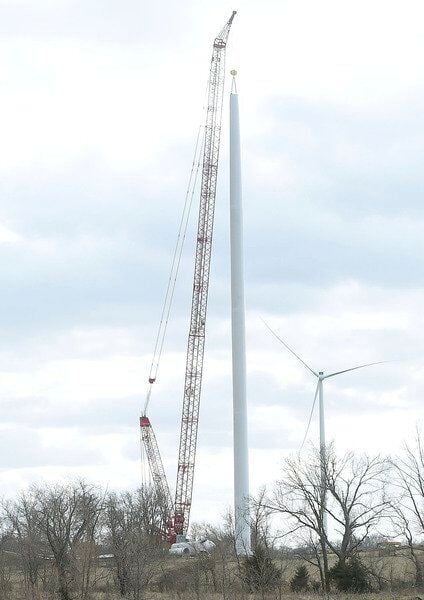 A crane stands ready for duty in the construction of a wind turbine last week at the Kings Point Wind Farm near Golden City. The turbine towers are 400 feet tall. The blades are 200 feet long. GLOBE | LAURIE SISK 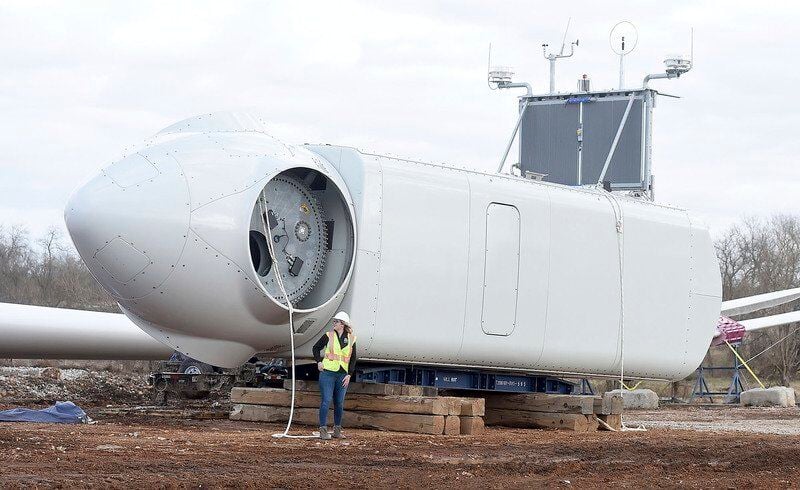 Jillian Curtis, Liberty media coordinator, shows off the massiveness of a nacelle, a component of a wind turbine that houses the generator and gearbox at the top of a wind turbine tower. The nacelle was awaiting installation last week at the utility company's Kings Point Wind Farm. GLOBE | LAURIE SISK

People traveling north at night on the Missouri Highway 249 might notice a row of dozens of red lights blinking in unison on the far north horizon as they approach the Webb City and Carterville exits.

People have spotted these lights from the south part of Carthage, and from Highway 96 between Carthage and Oronogo.

They’re a relatively new addition to the horizon — and they’re not even in Jasper County.

They're the aircraft warning lights atop the 69 400-foot-tall wind turbines of the North Fork Ridge Wind Farm in Barton County on both sides of Missouri Highway 43 north of Nashville.

Officials with Liberty in Joplin said the wind farm is almost finished and has been producing electricity since November 2020.

Two other wind farms in the area — the Kings Point Wind Farm near Golden City and the Neosho Ridge Wind Farm north of Parsons, Kansas — will be finished closer to spring.

Shaen Rooney, senior manager of strategic projects with Liberty, said the electricity utility company has finished 40 of the planned 69 wind turbines at the Kings Point Wind Farm and 115 of 139 turbines the Neosho Ridge Wind Farm.

Together the three wind farms will produce about 600 megawatts of power for the utility, replacing the 200-megawatt coal fired Asbury Power Plant, which was decommissioned in July 2020.

The wind farms have been under construction for a little more than a year.

“We’ll start commissioning, which is the manufacturer’s final testing, and running turbines at Kings Point here probably in a week to 10 days,” Rooney said. “The residents in that area will actually see a few of those turbines spinning very soon. That’s always a big milestone. People have seen turbines sticking up in the air for weeks and months now, and the big question we always get is when are we going to see them turn.”

Rooney said builders of the North Fork Ridge farm are down to final details before handing over the farm to Liberty. He said turbines there started sending electricity to the grid in early October 2020 and all the major construction and land restoration was finished the following month.

“The punch list is small items for the landowners, and some will take a little longer to do,” Rooney said. “We’ve got to make sure that vegetation gets reestablished in areas where the vegetation was stripped. Until that vegetation is reestablished, we’ve got to maintain erosion control. If a turbine tower needs touch-up painting or someone was carrying something out of a turbine and they damaged a handrail on the stairs, those are the kinds of things that are typical on a punch list. They wouldn't be anything major.”

Rooney said Liberty will probably add smaller amounts of renewable energy to its portfolio in the next few years, but this is likely all the wind energy it will add for the foreseeable future.

“This has been a big lift; this is a lot of energy right here,” Rooney said. “We’ve always been big advocates of having a diverse energy supply. Our strategy of diversification means over the next several years our energy resource buildup is largely going to be solar, including some large utility-scale solar projects. I think our plan has 50 megawatts of solar, along with some smaller, what they call distributed generation resources.

“Those would be smaller solar facilities, some of them with battery storage integrated, and they’d be distributed around our system where they can have the greatest impact on meeting the system’s needs, whether they need energy, whether they need resilience, whatever the local need may be.”

The company’s “Integrated Resource Plan” is a guide to the utility’s thinking on energy over the next few decades, and that plan changed drastically in the years since Empire District Electric Co. was acquired by Liberty in 2017.

The 2016 plan called for no additional wind or solar projects through 2029 and retiring the Asbury coal-fired power plant in 2035.

In 2019, a new plan was announced, and the company decided that, because of the need to invest millions of dollars in new ways to dispose of the coal ash from the Asbury plant, to retire that plant 15 years ahead of schedule and move forward with a plan to build the three wind farms and new solar farms to generate electricity.

Rooney said the property at the Asbury plant is still being used by the company. A substation built at the plant will move the electricity produced by the North Fork Ridge Wind Farm on to the regional grid, and all three wind farms will be monitored from offices at the Asbury plant.

“We’re kind of making it our renewable operating center,” Rooney said. “Also the maintenance shop we built out there has been retooled to be our service center for wind turbines. Any major energy facility you need an administrative staff, a staff of engineers and purchasing and inventory, all the normal administrative functions of a power plant.”

Rooney said the company will do what it can to make sure the wind farms have the smallest possible impact on wildlife, especially the populations of hawks, owls, vultures and other raptors that soar in search of prey.

“A lot of the work we do to prevent wildlife issues is done before we ever put a single wind turbine up,” Rooney said. “You try and do that, as much as possible, through site selection. If you do the project right from the start, the actual impact on wildlife should be minimal.”

He said monitoring the impact on wildlife will continue for the life of the plant.

“We believe we’ve done a good job through site selection and siting that we believe impacts will be minimal,” he said. “If there is a problem and we need to take care of it, we're not only obligated to it, we’re committed to doing these projects the right way.”