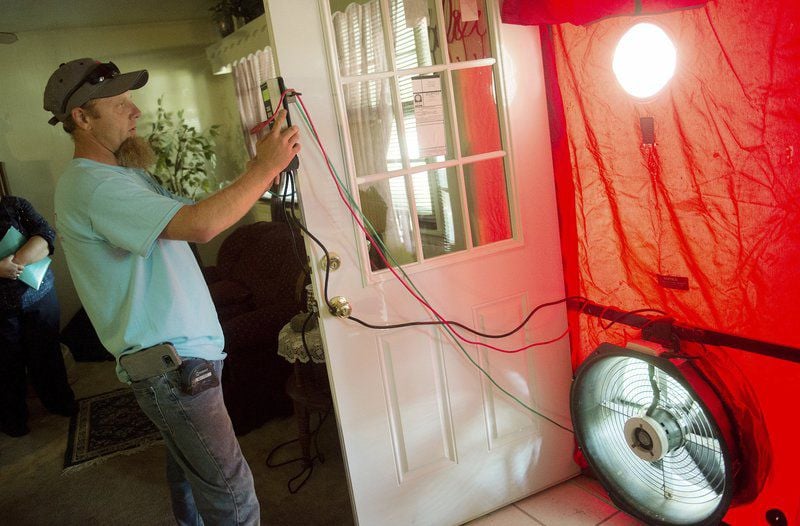 David Perry, crew chief with Economic Security, on Thursday demonstrates a blower door to test the energy efficiency of a house in Duenweg. GLOBE | ROGER NOMER 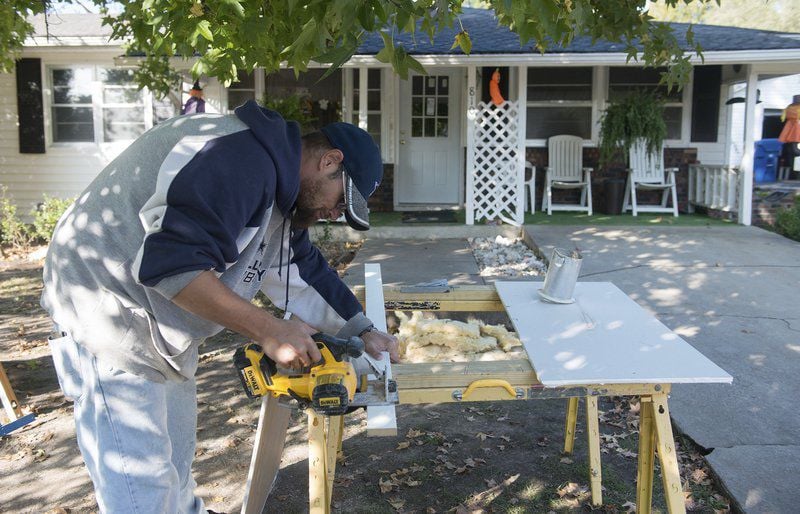 Tim Henderson, with the Economic Security Corp., works on weatherizing a house Thursday in Duenweg. The ESC is marking the 40th year of its weatherization program, which has served the occupants of about 6,000 houses since it was started. GLOBE | ROGER NOMER 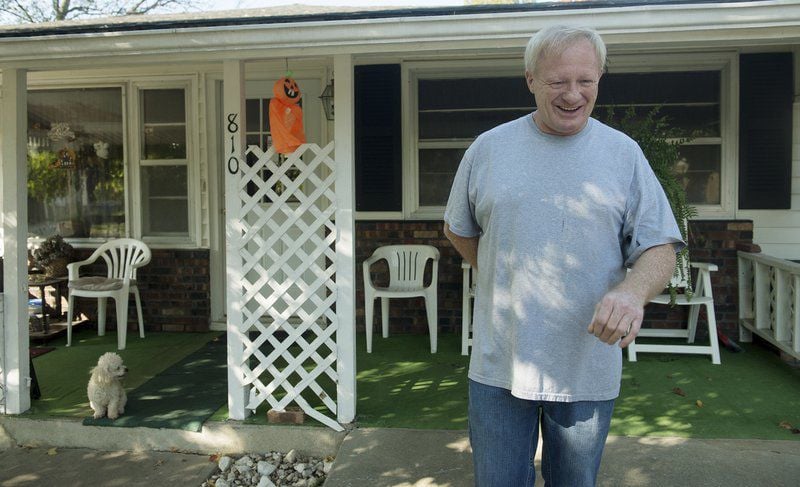 Charles Carter talks about his gratitude for the ESC weatherization program during an interview on Thursday at his house in Duenweg. GLOBE | ROGER NOMER

David Perry, crew chief with Economic Security, on Thursday demonstrates a blower door to test the energy efficiency of a house in Duenweg. GLOBE | ROGER NOMER

Tim Henderson, with the Economic Security Corp., works on weatherizing a house Thursday in Duenweg. The ESC is marking the 40th year of its weatherization program, which has served the occupants of about 6,000 houses since it was started. GLOBE | ROGER NOMER

Charles Carter talks about his gratitude for the ESC weatherization program during an interview on Thursday at his house in Duenweg. GLOBE | ROGER NOMER

For 40 years, a local weatherization program has been making winters a little cozier in the homes of Southwest Missourians.

On Thursday, participants and partners in that program celebrated the accomplishments of four decades of innovations aimed at achieving better energy efficiency for residents on tight budgets.

They did so by celebrating at a project at the home of Charles Carter in Duenweg that formerly belonged to his dad.

"My father passed away a year ago and I wanted to keep the house in the family so I purchased it," Carter said. After he did that, he found that the heating system did not work properly. But being disabled and having limited income, he wasn't sure what he could do to fix it. Then a friend told him about the weatherization program operated by the Economic Security Corp., the local community action agency.

"If they went through the program or not I don't know, but they were telling me about it and I followed up on it and I'm so glad I did," Carter said. "The heating unit was 20 years old and there was nothing hardly left of it. They're putting a new one in for me now or otherwise I would have never been able to afford it."

Workers also insulated the floors and attic and water lines, checked the walls and windows for air leaks, and are to install energy-efficient light bulbs and other things to reduce Carter's fuel use.

Robert Garber, an energy specialist with the Missouri Department of Economic Development's Division of Energy, said the ESC has weatherized 6,000 houses over those 40 years. He said a comprehensive energy analysis is done on each house as well as looking for any health and safety issues in order to decide what work should be done.

"That's quite a number of homes we've done, and, on an annual basis, we do about 126 homes," said Debbie Markman, resource development director for the ESC.

The work done on the houses usually reduces utility bills by more than a third, Markman said.

She said the program also is a boost to local businesses in that nearly 90 percent of the products used for the projects are made in America.

"In some cases, businesses that are smaller have actually enlarged because of their work with us, by needing to get more workers," she said. "So we have put more people to work not only in our agency but in the community."

ESC uses multiple contractors because it bids out each job and awards the job to the lowest bidder.

Nate Hackney, of Empire, said that utility contributes about $250,000 to area weatherization programs.

The company is preparing to roll out some new programs that will include one that offers rebates to homeowners who replace old heat and air units with high-efficiency units, he said. There also will be a commercial and industrial program to help businesses with their utility expenses.

"It's extremely important that, on one level, we help our homeowners be more efficient," Hackney said. "We also help them be comfortable, and the bottom line is safety. This program fits all three, and that is something Empire cares greatly about."

MGE provides $750,000 a year for its territory in the Kansas City area and Southwest Missouri, said Shaylyn Dean, an energy efficiency specialist with the gas company. That money is divided among six community action agencies, including the ESC, which gets about $70,000.

That is especially true for Carter. Workers on his project found that his heat exchanger was cracked and was emitting potentially deadly carbon monoxide.

Those who qualify for the program can meet no more than 125 percent of federal poverty guidelines, which is about $1,200 per month for one person and about $1,600 for two.

Applicants can own the home or live in a rental. Landlords have to agree to the project and they have put in a percentage of the cost of the project, usually $200 to $500, Markman said.

Information about the ESC weatherization program may be obtained by calling the agency at 417-781-0352, going on the agency's website at www.escswa.org, or visiting the office at 302 S. Joplin Ave.  The agency also has offices to serve residents in Barton, Newton and McDonald counties.