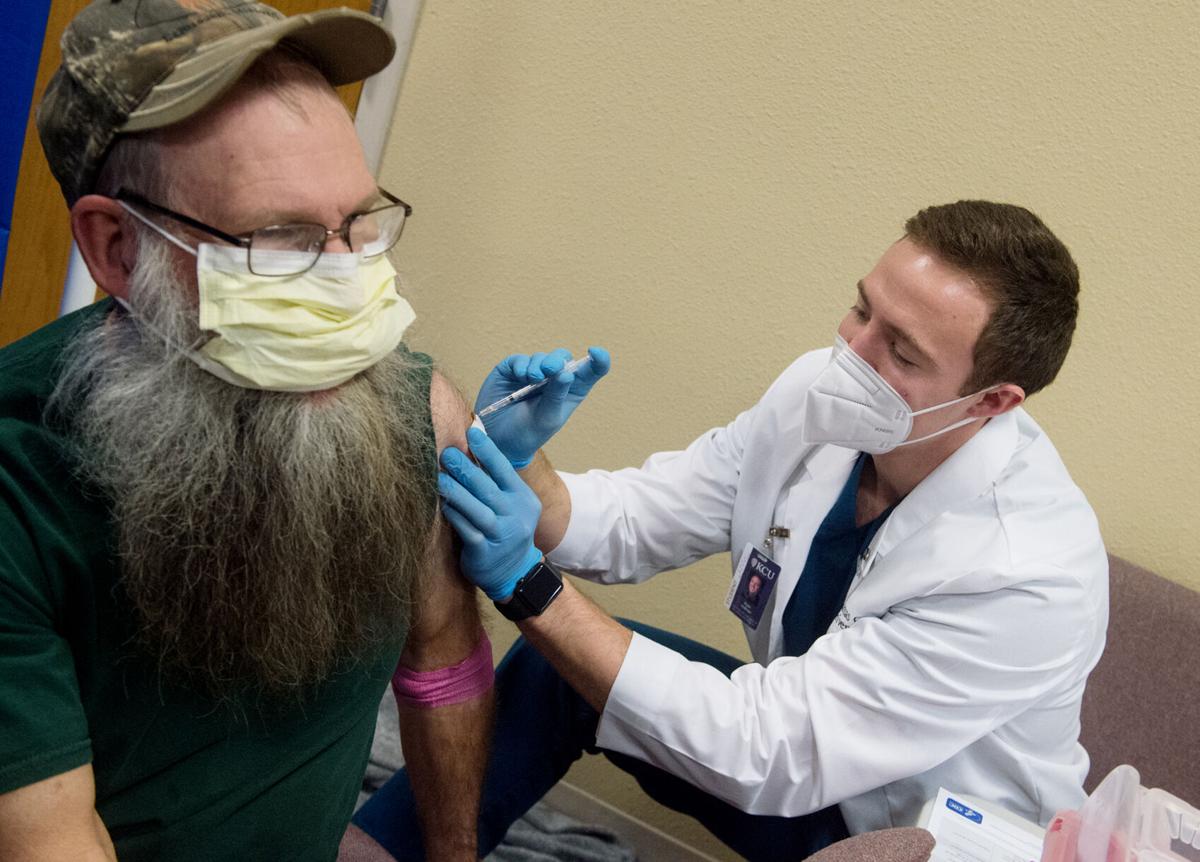 Ryan Hoffman, a first-year student at Kansas City University Joplin campus, administers a vaccine to Larry Christman during Tuesday’s clinic at Fairview Christian Church in Carthage. The clinic was slated by the Jasper County Health Department with the assistance of the Missouri National Guard and others such as KCU. The clinic will continue today at the church. GLOBE | ROGER NOMER 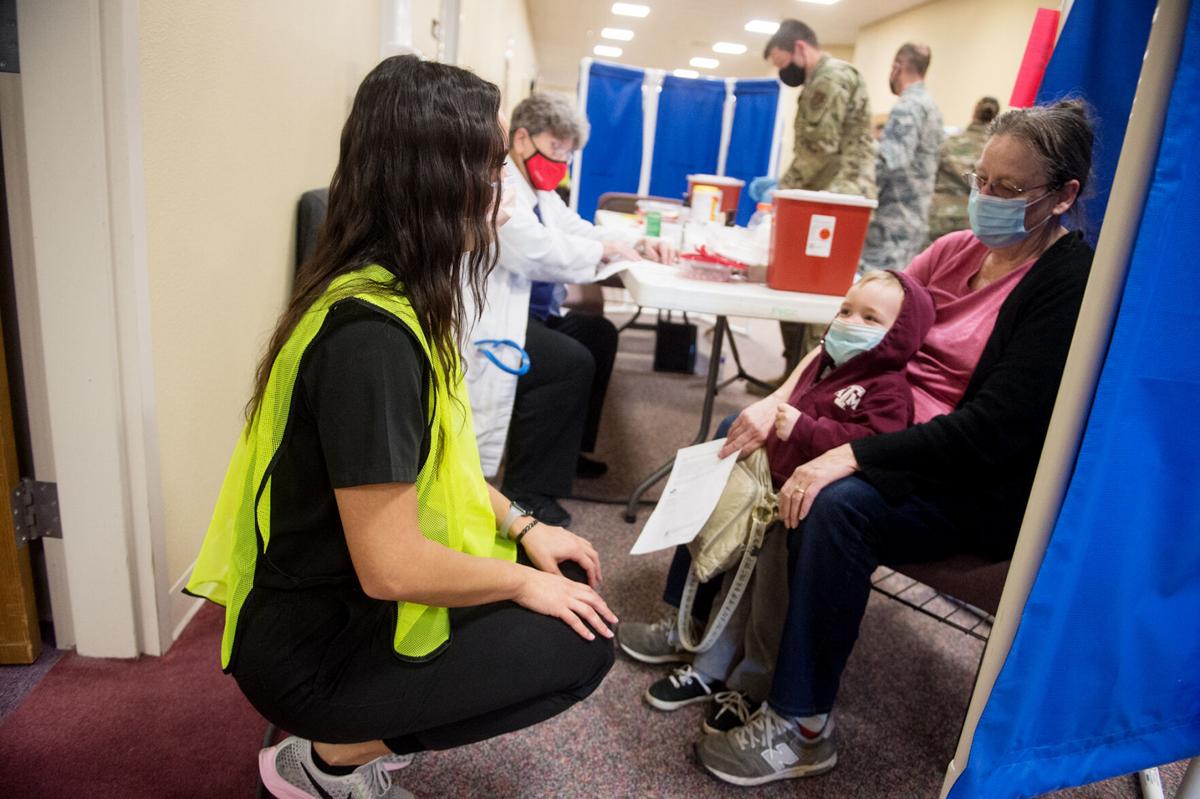 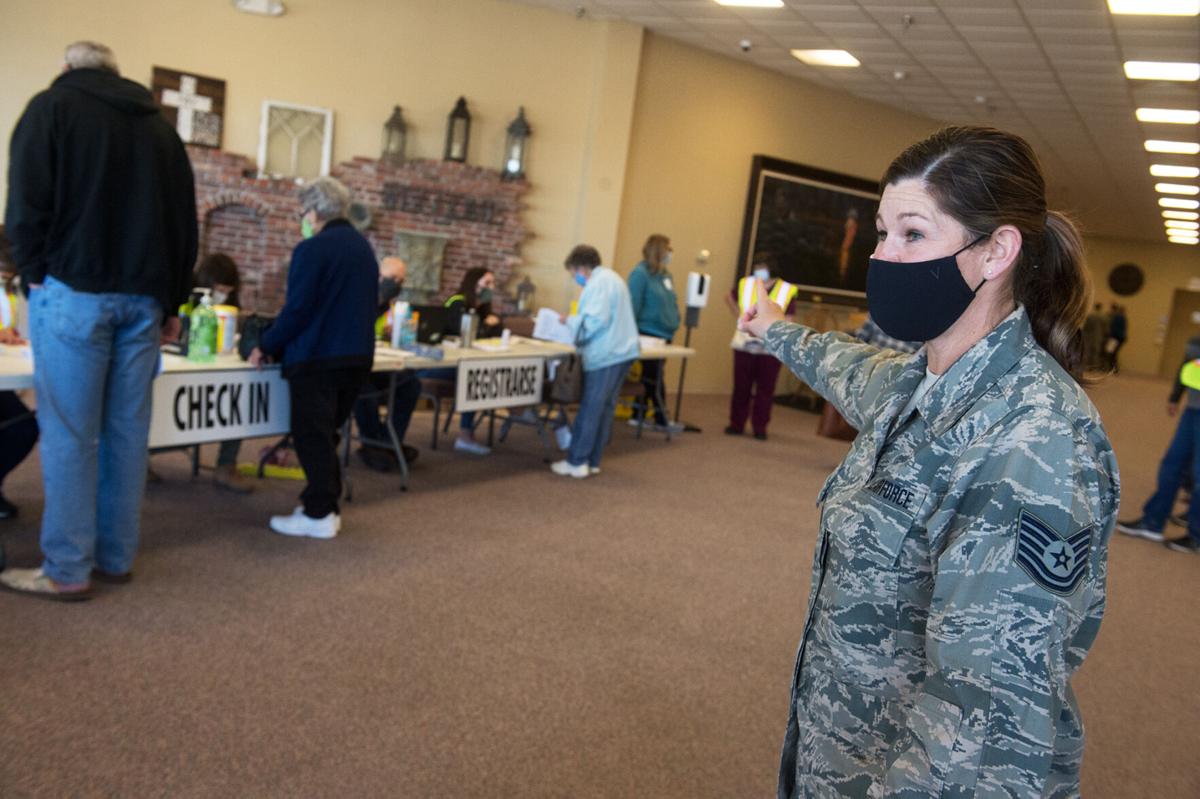 Tech Sgt. Michelle Brown directs traffic during a clinic on Tuesday at Fairview Christian Church in Carthage. Clinic organizers were hoping to vaccinate 1,800 during the two-day clinic. GLOBE | ROGER NOMER 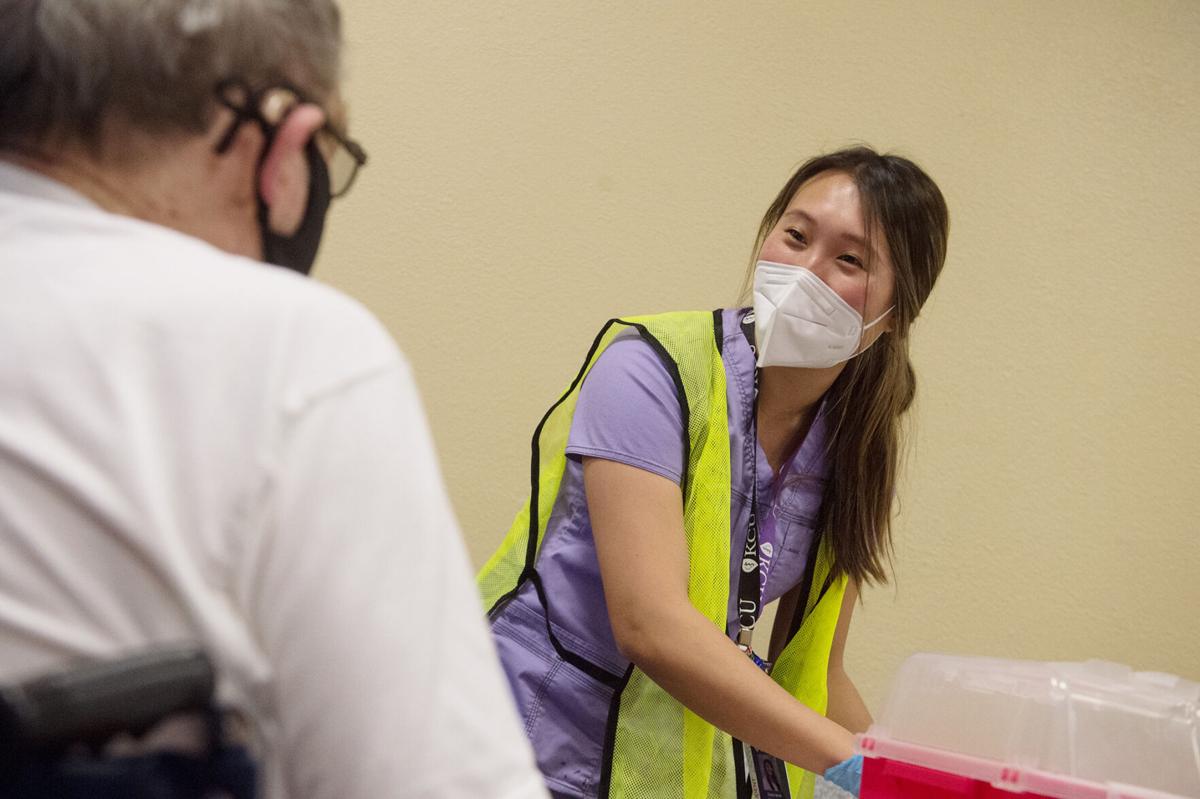 Ryan Hoffman, a first-year student at Kansas City University Joplin campus, administers a vaccine to Larry Christman during Tuesday’s clinic at Fairview Christian Church in Carthage. The clinic was slated by the Jasper County Health Department with the assistance of the Missouri National Guard and others such as KCU. The clinic will continue today at the church. GLOBE | ROGER NOMER

Tech Sgt. Michelle Brown directs traffic during a clinic on Tuesday at Fairview Christian Church in Carthage. Clinic organizers were hoping to vaccinate 1,800 during the two-day clinic. GLOBE | ROGER NOMER

CARTHAGE, Mo. — Gail Matthews, 64, made the hourlong drive Tuesday from Springfield to obtain her first dose of Pfizer’s COVID-19 vaccine in Jasper County, but her appointment only took 10 minutes.

Although it wasn’t preferred, Matthews said the mass vaccination clinic at Fairview Christian Church in Carthage was worth the drive. The Jasper County Health Department is partnering with the Missouri National Guard and local communities to provide the two-day clinic this week at 2320 Grand Ave. in Carthage.

“When I called to make an appointment in Springfield, they were all booked up,” Matthews said. “They said they’d try to get me into a closer one, and this was it.”

Roughly 1,000 people signed up for the two-day event, but more shots are available. The state is currently in Phase 1B, Tier 2 of its vaccination rollout plan, which includes those who are at increased risk of severe illness. Phase 1B, Tier 3, which will make educators and other critical personnel eligible, will be activated March 15.

The vaccination process was a lot easier than Matthews had originally thought. She said the indoor clinic was extremely efficient and painless.

“My husband had his vaccination already because he’s older than I am, and he said his took a long time, but this was so organized,” she said. “They really did a great job.”

Winona Knight, 66, of Carthage, was vaccinated Tuesday after overcoming COVID-19 in November. Knight said she didn’t end up in the hospital, but she ran a fever for several days and didn’t have the strength to get out of bed.

“I know I had it because I’ve never felt like that before, and I wouldn’t want anyone to have to go through it,” she said. “I usually don’t get sick, but I was down for two weeks. I ran a 102-degree fever for 10 days. I hope if I ever get it again, it won’t be as bad.”

Knight was also impressed by the indoor clinic’s layout and effectiveness. The Carthage native said she only waited about five minutes before she was seen.

“A lot of times, we only get 100 doses every week or two,” Moehr said. “We’ve had multiple smaller clinics. This is our first large one that we’ve sponsored with the National Guard. We’ve geared up to try and do 1,800 shots today and tomorrow.”

Only about one-third of the population 65 and older in Jasper County have been vaccinated, he said.

Staff Sgt. Andrew Rivera said the Guard has about 30 personnel aiding with the clinic.

“It’s been awesome to see the support of not only medical students but also the nurses and the health departments,” he said. “It’s great when a community can gather together, and we see that all across the state.”

The county health department and the Missouri National Guard were assisted by the city of Joplin, the Joplin Health Department, the city of Carthage, Kansas City University of Medicine and Biosciences in Joplin, Carthage Police Department, the Missouri State Highway Patrol, Mercy EMS and Ozark Center in Joplin. There were an estimated 80 to 90 volunteers working Tuesday.

“We have a lot of entities here who aren’t from Carthage and being the local police department here, we’re able to answer a lot of questions,” said Chad Dininger, Carthage police spokesman. “For us, it’s been very smooth. This might be the first pandemic where we’re having vaccinations, but we’ve planned and trained for this. We’ve developed these strategies and relationships long ago, and when you see it come together, it’s nice to know that you train for a reason.”

Patricia Palanca, a second-year KCU medical student, volunteered her time Tuesday to administer vaccines alongside nine of her peers, who rotated in shifts. Palanca, 25, said this was her first vaccination clinic, which she described as a rewarding experience. Her father, Roy, died of COVID-19 in April, and she’s happy to be in a position to help make a difference.

“I didn’t expect it to be this big,” Palanca said. “It is super rewarding, especially because we’ve all been in it. Being able to participate in stuff like this, makes everything come full circle.”

Kenneth Stewart, physician and assistant professor of clinical medicine at KCU, said their team of students are excited for the opportunity to work and engage with patients in the community. As faculty, Stewart said it’s fulfilling to see students gain more confidence out in the field.

“Students are volunteering their time, and it’s so good for their morale,” he said. “It’s encouraging for them to say, ‘That’s why I went to medical school, to take care of people.’”

Today’s vaccination clinic will be open from 9 a.m. to 1 p.m. at Fairview Christian. A follow-up clinic for the second dose of the Pfizer vaccine is slated for late March.

To register, qualified individuals can sign up online with the Missouri Vaccine Navigator at www.mo stopscovid.com or call the hotline at 877-435-8411. Anyone 65 and older who needs assistance can call the Area Agency on Aging at 417-781-7562.

Local hospital admissions for COVID-19 down

Local hospitals have been seeing a small number of COVID-19 patients as well as seeing fewer serious complications from the virus, officials s…