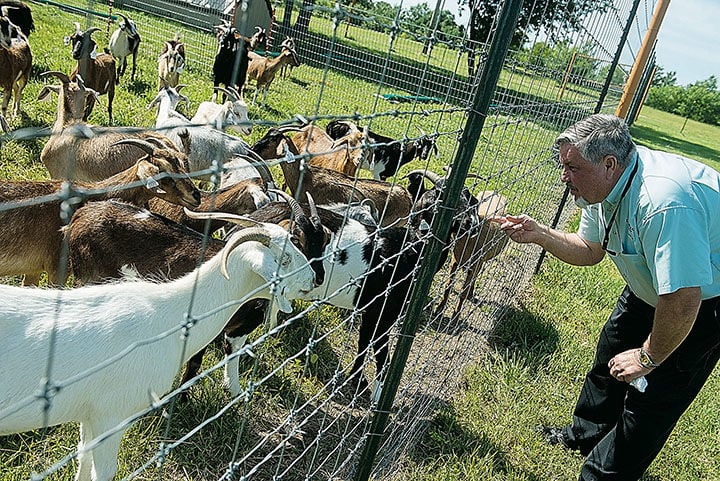 Gilbert Johnston, horticulture manager, recently checks in on goats at the Quapaw tribe’s farm near its Downstream Casino. What the tribe calls its farm-to-table initiative produces food products from its bison, cattle and garden operations in Ottawa County, and makes those products available to tribal members and the public. GLOBE | ROGER NOMER 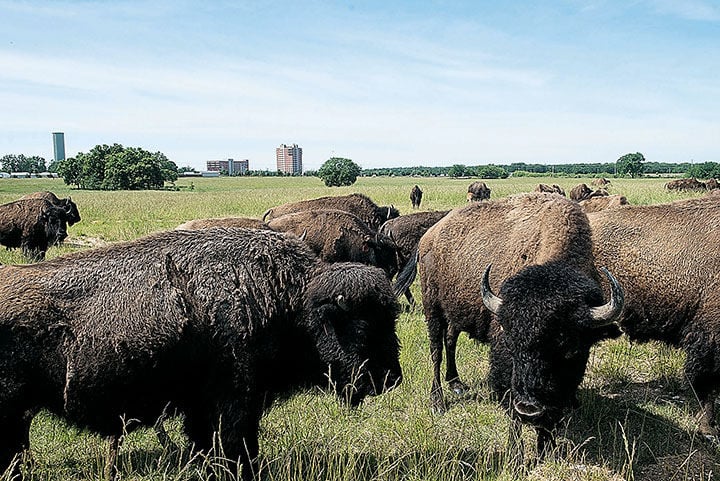 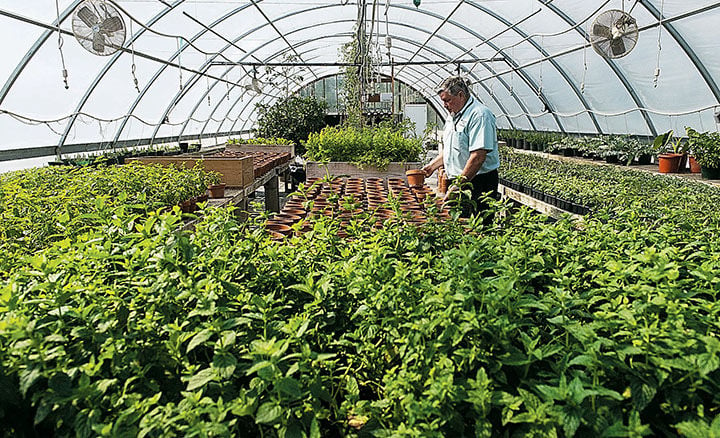 Gilbert Johnston, horticulture mananger, shows off the Quapaw tribe's greenhouse that is a part of its farm-to-table program. GLOBE | ROGER NOMER

Gilbert Johnston, horticulture manager, recently checks in on goats at the Quapaw tribe’s farm near its Downstream Casino. What the tribe calls its farm-to-table initiative produces food products from its bison, cattle and garden operations in Ottawa County, and makes those products available to tribal members and the public. GLOBE | ROGER NOMER

Gilbert Johnston, horticulture mananger, shows off the Quapaw tribe's greenhouse that is a part of its farm-to-table program. GLOBE | ROGER NOMER

QUAPAW, Okla. — With Downstream Casino and Resort as the backdrop, a herd of bison grazed lazily on summer grasses. Goats roamed nearby, feeding on more grass behind a wire fence as a greenhouse crew tended to fresh vegetables, herbs and tropical flowers, some of them destined for that casino. All the while, 50 wooden beehives filled the air with a steady buzz.

It’s all part of the Quapaw tribe’s farm-to-table initiative, which is generating some buzz of its own.

“Historically, we’re agricultural people, and we’re just going back to the basics. It’s who we are.”

The tribe plans this summer to open its own processing plant for those bison as well as 500 head of cattle it owns on 1,500 acres throughout Ottawa County. Tribal plans also include developing markets for that honey and maybe adding poultry.

“Historically, we’re agricultural people, and we’re just going back to the basics,” said Quapaw Chairman John Berrey, who has been behind the effort. “It’s who we are.”

The tribe began raising bison in 2010, and now has a herd of 160. Greenhouses were added three years later. The cattle and bee programs were launched in 2014. Today, the Quapaw Cattle Co. produces its own hormone-free Angus beef, which is served in the tribe’s two casinos, sold in the tribe’s nearby convenience store and at Quapaw Mercantile in the tribal office. The meat is also served at the tribe’s daycare and elders center.

“It’s really good for us in terms of quality of food,” Berrey said, “and it’s good for your life to participate in what you live upon.”

Poultry is also a future possibility.

“We’ve been talking about getting mobile chicken units where you can move them around pastures,” Berrey said. “They eat the weeds, clean up the bugs and fertilize it. Then, you just keep moving it around.

“If you take a step back and look at the pasture, if you have goats, chickens, cattle or bison, you’re really making the maximum use of that in the most sustainable way,” he added.

Near several raised garden beds outside the greenhouses, where plants are transported as they grow, the tribe’s horticulture manager, Gilbert Johnston, explained that no pesticides or chemicals are used on the plants in order to preserve the tribe’s bees. Instead, he said, the tribe attempts a more natural approach using neem oil — a vegetable oil made from an evergreen — to fight off insects. Plants are pollinated by the bees, which come and go from the greenhouses. Before acquiring the bees, the plants were pollinated by hand with tiny brushes.

“We use ladybugs and bees in our greenhouses,” Berrey said. “The goats we’re using to reduce any need for broadleaf vegetation spray. We have cut way back on pesticides and herbicides, which is good for the water and the air.”

A resident beekeeper leads the harvest for the honey as well as beeswax used in candles or at the casino’s spa. The bees produce light spring and dark fall honey, and although the honey is not sold to the public yet, Berrey said that is on the horizon.

“Everything we’re doing, the bees are very much a part of what we do,” he said. “As soon as we have a bulk amount (of honey), we’ll be able to start selling it and get it out to where people can benefit from it.”

Tropical flowers grown in the greenhouse are also used at Downstream Casino in fresh flower arrangements and landscaping. Produce and herbs are used in the tribe’s casinos, for banquets, special events and also go to the elders center.

Johnston went on to name the groups throughout the region that benefit from the produce operations.

“The tribe donates to the community, the schools, the Wellness Center, the sheltered workshop, the Children’s Miracle Network, the women’s center — it’s never-ending,” Johnston said. “If we have overages in vegetables or things like that, they’ll pack up a truck and deliver to the surrounding area. They do everything they can to help our community.”

Plants, fertilizer and scraps that are unusable are thrown into a compost pile where it goes back into the earth and becomes reusable. Squash blossoms and flowers spring from the large pile.

“We have our compost pile out back, and pretty much anything we throw in it thrives out there,” said Dawn Wormington, a horticulture technician. “It gets out of the indoors here where sometimes it’s too humid, too hot or too old. They just thrive, and we’ll harvest off of the pile, also.

“Anytime we can reproduce, start it on our own, propagate — that’s what we do,” she added.

A quarter-mile east of the Quapaw Casino on East 66 Road in Miami, work is underway on the tribe’s million-dollar meat processing plant.

“We’ll then have control over our meats from birth to plate,” Berrey said. “The packaging will be very important with how it’s all cut. We’re excited to be able to have control over that. We think we’ll be able to make great quality products, which in turn will be another good source for jobs and to fulfill some of our goals.”

The state-of-the-art, 25,000-square-foot plant is scheduled to open in August, he said, and the meat from both the cattle and the bison will be USDA inspected. Berrey said the tribe is also planning a test kitchen, a classroom and a laboratory for training purposes. Currently, the tribe is working with Northeastern Oklahoma A&M College in Miami, the University of Arkansas, Missouri State University and Oklahoma State University to create a training program for students.

The tribe received an $800,000 U.S. Housing and Urban Development grant and committed $200,000 in private tribal funds to build the plant, while some of the equipment inside — more expensive than the plant itself — was purchased with grants from the USDA.

Once completed, Berrey said, the tribe will have invested several million dollars in the overall project, not including the livestock. The initial plan is to hire six employees, but that could turn into 20. The tribe plans to process up to 50 head a week at maximum capacity.

“We think it’s really good, not just for the Quapaw tribe but for the greater Ottawa County area, to pay more attention to what we eat and how we grow it,” Berrey said.

Janie Hipp, director of the University of Arkansas’ indigenous food and agriculture initiative, said during the groundbreaking last year that the advantages of the meat processing plant don’t stop with the Quapaw tribe and students who will study there. Hipp, who belongs to the Chickasaw Nation, said many Native American tribes throughout the country have longstanding cultural ties to food production that have, in some cases, diminished.

“If you go back into individual tribes’ history before European contact, there was massive levels of food production going on,” she said. “It wasn’t all just hunting and gathering; it was food production. It’s amazing. It’s a very exciting jump.”