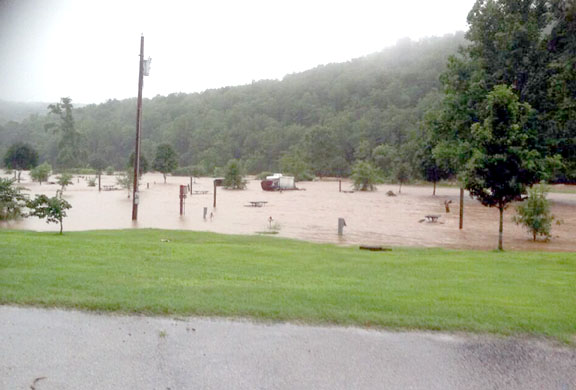 One of the campgrounds at Roaring River State Park is flooded from heavy rains on Wednesday night. 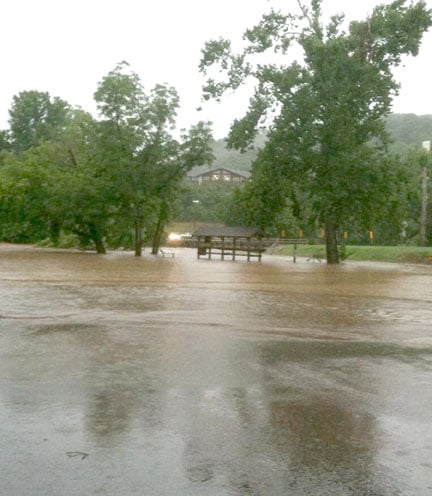 One of the campgrounds at Roaring River State Park is flooded from heavy rains on Wednesday night.

A Noel woman drowned this morning when her car was swept off Missouri Highway 90 in McDonald County by flood waters from a tributary of Elk River.

Helen A. Pendergraft, 69, is believed to have drowned shortly before 5 a.m. when waters from Brush Creek topped the highway and swept her two-door car downstream. Her body has been recovered and taken to the Ozark Funeral Home in Anderson, according to Sgt. Mike Watson of the Missouri State Highway Patrol.

Sheriff Michael Hall said the drowning was the lone traffic accident caused by flash flooding that struck McDonald County in the wake of heavy rains overnight. But there are rescue attempts in progress of people whose homes are flooded, the sheriff said. He said there were at least two such rescue attempts in progress at 11:30 a.m. along Big Sugar Creek Road east on Pineville.

Earlier in the morning, rescue workers evacuated people stranded on flash flood islands created at campgrounds in the county, the sheriff said.

Two campgrounds at Roaring River State Park have been closed as crews wait for flooding to subside so they can begin repairing damage.

“The park received a massive flood in the lower end last night,” said Hatchery Manager Paul Spurgeon. “From Dry Hollow on down, we got a lot of rain. Campgrounds 2 and 3 will be closed for awhile as we’re anticipating quite a bit of stream damage.”

Those repairs likely will start on Monday, depending on the weather. Park staff had been gearing up for an influx of a few thousand children and adults as the semi-annual Kids’ Fishing Day is slated for Aug. 17. Typically on those days, the campgrounds are full.

The upper part of the stream above Dry Hollow didn’t get as much rain, Spurgeon said, although about two feet of water was over the low-water bridges Thursday morning.