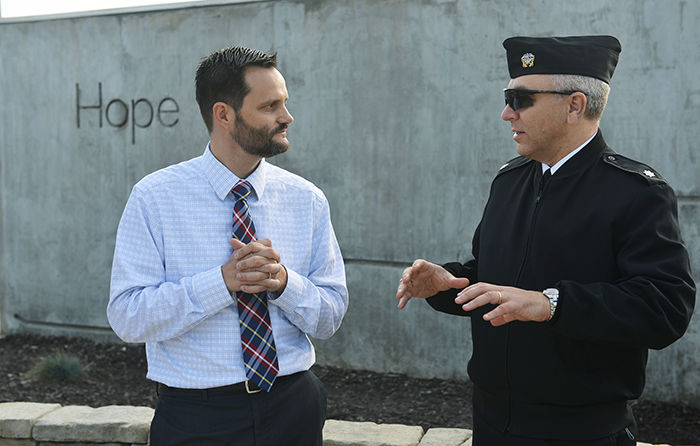 Sam Anselm, interim city manager, talks with Capt. Michael Luckett, commander of the USS Missouri, during a Joplin tour stop Thursday at the tornado memorial at Cunningham Park. Sailors from the USS Missouri came to Joplin shortly after the 2011 tornado to assist with debris removal and other volunteer work. 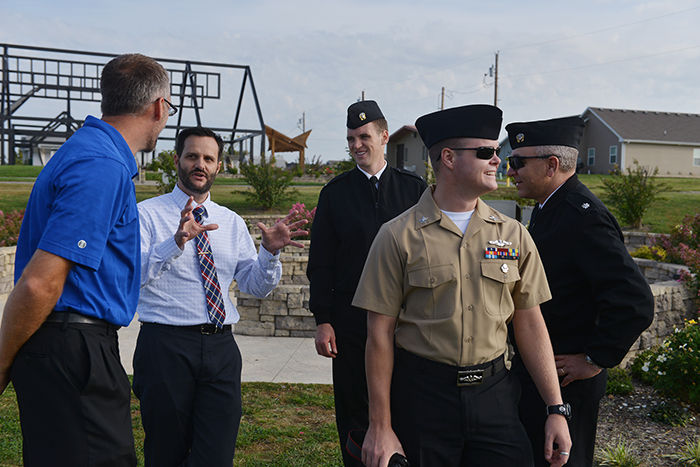 Members of the U.S. Navy, (from left) Lt. James Russell, Capt. Michael Luckett and Petty Officer Kyle Nelson, and Kurt Higgins, with the state SAVE Coalition, listen to Sam Anselm on Thursday as he talks about the volunteer memorial at Cunningham Park.

Sam Anselm, interim city manager, talks with Capt. Michael Luckett, commander of the USS Missouri, during a Joplin tour stop Thursday at the tornado memorial at Cunningham Park. Sailors from the USS Missouri came to Joplin shortly after the 2011 tornado to assist with debris removal and other volunteer work.

Members of the U.S. Navy, (from left) Lt. James Russell, Capt. Michael Luckett and Petty Officer Kyle Nelson, and Kurt Higgins, with the state SAVE Coalition, listen to Sam Anselm on Thursday as he talks about the volunteer memorial at Cunningham Park.

Efforts by Joplin and Duquesne toward tornado recovery has united the cities with a special group of supporters — the crew of the USS Missouri.

Luckett said the trip is part of a five-day Missouri tour by the crew members with a stop here intended to see how the city has fared since eight crew members from the ship that is the state’s namesake took voluntary leave in June 2011 to assist with debris cleanup from the EF-5 tornado.

Those sailors came to Joplin with AmeriCorps, the American Red Cross and the Missouri State Emergency Management Agency and worked as crew leaders to organize volunteer teams. Those teams helped clear rubble and assisted homeowners in retrieving any belongings that could be salvaged from the rubble.

Luckett was assigned as the boat’s commander after that effort and said Thursday that the last of those eight sailors recently left service on the boat. He said he wanted to visit to assure a continuity in the relationship between the ship and Joplin.

“I appreciate the opportunity to come and visit,” Luckett said. “I find the story of Joplin’s recovery to be inspirational, turning adversity into something positive and not just rebuilding the town but rebuilding better to make a better place.”

Anselm said of the visit, “I think it demonstrates there’s still an interest out there in what we’re doing as a community when it comes to recovery. Obviously to have the crew of USS Missouri and the commander of the boat, it’s a humbling experience. They’re serving our country in ways we’ve seen from the thousands of volunteers that we have that came from all over the country to help out. That spirit the captain alluded to is still alive and well in Joplin. It’s a good experience to be able to share what has been done in the recovery.”

Anselm said the sailor volunteers had worked in Duquesne and also in the area where St. John’s Regional Medical Center was destroyed. He took their successors to Duquesne to see the new East Middle School and Soaring Heights Elementary School before moving on to Cunningham Park, where memorials to the 161 who died in the storm are located as well as a tribute to the volunteers who helped with the rescue and recovery.

They put in 504 hours of service to clear several acres of trees, cars and other debris while working with 200 other volunteers.

One of those sailors, Chief Yeoman Mike Shea, said in a statement: “I was honored that USS Missouri sailors participated in cleanup efforts to help out our namesake state.”

Anselm also took the visitors to the St. John’s site where the sailors also had worked, and to the temporary Mercy Hospital site and the new hospital location that will open in March. They also viewed the new fire stations the city built to replace two that were destroyed, and the newly built St. Mary’s Catholic Church.

“It was definitely a great, humbling experience to come down to the city of Joplin and tour where my shipmates previously had been able to come down and provide some aid and assistance,” said Nelson, one of the sailors, of Pennsylvania. “It’s good to see that we are able to provide support to the state that also has provided my ship so much support. We have maintained a very healthy working relationship with the state and especially for the city of Joplin.”

Luckett said the group also has been to Kansas City and next will visit Jefferson City, where they will meet Gov. Jay Nixon. The sailors then will visit Columbia and attend a Mizzou football game.

The USS Missouri is a nuclear powered submarine that was commissioned in 2010. It is designed as an attack ship to damage enemy boats and is fitted with special compartments to deploy Navy Seal divers during national security missions.

Luckett said the boat, staffed with 134 sailors, has recently served two missions in the European Theater.

It is the fourth vessel to carry the Missouri designation, with the original and most famous being the “Mighty Mo” battleship that served as the location for the signing of Japan’s unconditional surrender to Allied Forces at the end of World War II. It also served in Korea and Operation Desert Storm before leading vessels into Pearl Harbor in 1991 for the observance of the 50th anniversary of the attack on Pearl Harbor. It was decommissioned a year later. It now serves as the Battleship Missouri Memorial in Pearl Harbor.

“To continue the relationship between the boat and the good state of Missouri is a great opportunity, and I’m glad to be here to see how far Joplin has come,” said Russell, another of the sailors, of Maine.

Bert Ewing, a retired U.S. Air Force pilot from the Springfield area who serves on the USS Missouri Commissioning Committee, met the visiting group in Joplin.