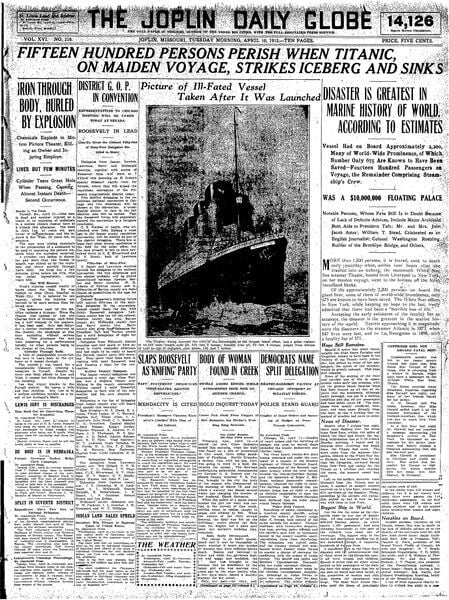 This edition of The Joplin Globe from April 16, 1912, documents the sinking of the Titanic.GLOBE FILE 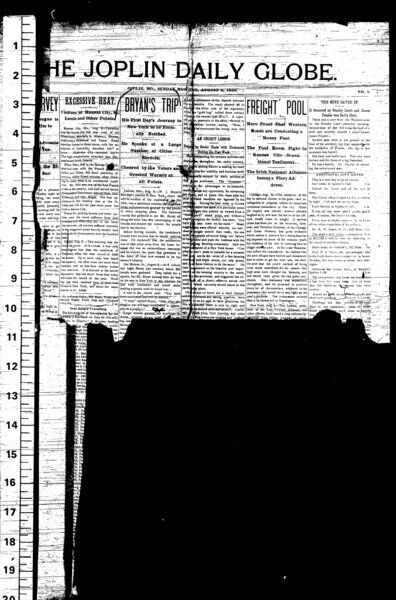 This scan is all that remains of the first printed edition of The Joplin Globe from Aug. 9, 1896. The newspaper was founded then in support of William Jennings Bryan's presidential campaign.GLOBE FILE

This edition of The Joplin Globe from April 16, 1912, documents the sinking of the Titanic.GLOBE FILE

This scan is all that remains of the first printed edition of The Joplin Globe from Aug. 9, 1896. The newspaper was founded then in support of William Jennings Bryan's presidential campaign.GLOBE FILE

One of my favorite stories about The Joplin Globe ran in its pages on April 1, 1945.

Three U.S. soldiers — none of them local — had reached an unidentified town overlooking the Roer River — " incidentally, a German-held town until we pushed them in the river a few weeks ago," the soldiers noted in their letter to the paper.

"Donated to the citizens of Joplin by the 29th Infantry Division," their letter stated.

It was unclear to them how a copy of the Globe printed 40 years earlier and on another continent ended up in that German attic, but the Globe noted that the 1905 edition contained a lengthy obituary of Margaret Zelleken, who was born in Germany in 1844, immigrated to the United States and married Edward Zelleken, whose Queen Anne home at 406 S. Sergeant is one of those now being restored. Her maiden name was Grome, which was the original name for a building at 506 S. Main St. that Edward Zelleken built.

The 1905 paper was in such good condition that the Globe in 1945 was able to reproduce the upper half of the front page.

"Parenthetically," the story also noted, "some weeks ago another American doughboy on the other side of the world in this global war wrote that he found a copy of The Globe in the humble hut of a native on Leyte, in the Philippines. Proof, we think, that The Globe gets around."

I guess that's what happens when you hit 125 years — you've gotten around.

The first edition of the Globe came out on Aug. 9, 1896 — 125 years ago this summer — and the owners made no secret of their reason for launching it: supporting William Jennings Bryan for president.

The paper's roots go back further than that. The first Joplin paper was the Mining News, founded in 1872 and printed a block or so from where the Globe is today. It later became the Joplin News. The Joplin Herald launched in 1877. Those two merged in 1901, becoming the Joplin News Herald, an afternoon paper that printed until 1970.

One of my favorite newspaper promotions from years ago stated, "The sun rises with the Globe and sets with the News Herald."

Throughout this year, in honor of our anniversary, we will be reproducing front pages from the past 125 years, including what's left of that first one. Not much survives, but it does contain part of a story about Bryan's journey from Nebraska to New York to receive the Democratic nomination for president, a story about a deadly summer heat wave and not-so-subtle front-page plug for free silver, meaning Bryan.

The Globe's front pages will appear in the Monday e-edition and on our website, joplinglobe.com, with another page being added each week during the year.

You'll find stories like this, from April 27, 1902: "Destructive tornado in Joplin. Two people killed and many maimed. Families rendered homeless by Merciless Elements. Worst that Joplin has known."

The path of that storm stretched from Seventh to 17th streets.

There are national headlines, including the San Francisco earthquake of 1906, and the sinking of the Titanic in 1912, and local headlines, such as the dynamiting of the Joplin News Herald in 1907 following its anti-corruption campaign.

We think the 2020 presidential election was rough, and it was, but perhaps nothing compared to a Joplin election in 1910. At stake was a decision about whether the city would close its saloons. It was touted as "the hardest fought election ever held in Joplin."

"Joplin Goes Wet," was the headline after the vote, in case there was any doubt.

Another of my favorite headlines from the Globe ran in a special edition on Dec. 7, 1941, following the bombing that morning at Pearl Harbor. It was essentially a series of war bulletins, accompanied by headlines written with more patriotic fervor than fact.

"The latest reports indicated that that the United States has won the first battle in the new world war," read one of the dispatches.

We hope you enjoy the look back during this year and maybe discover, as I have, that many of the challenges of our time, while not identical, would be familiar to earlier generations.

And next time you are in the lobby of the Globe, look around for the black monument embedded in the floor. It's a time capsule to be opened in 2096.

Andy Ostmeyer is the editor of The Joplin Globe. His email is aostmeyer@joplinglobe.com.

To mark the 125th anniversary of The Joplin Globe, browse through front pages of editions through history. Check back every Monday to see a ne…