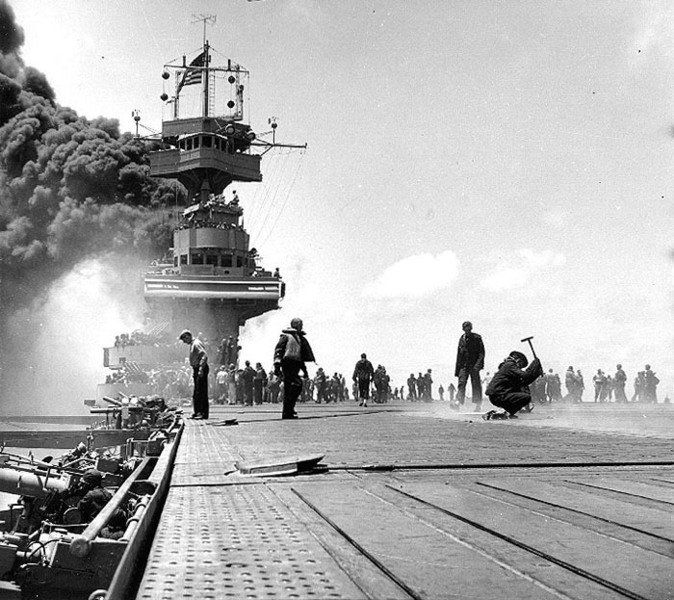 Although it survived the Battle of the Coral Sea, the USS Yorktown did not survive Midway. Photo courtesy National Archives 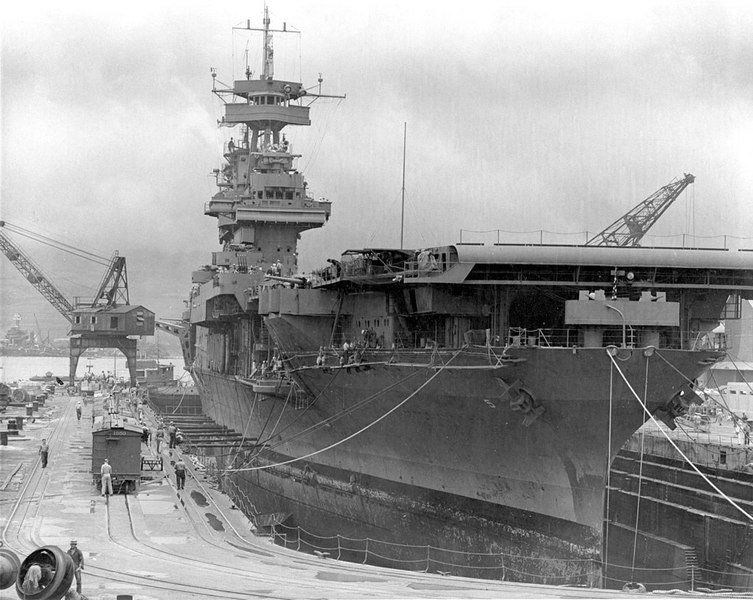 The USS Yorktown at Pearl Harbor in May 1942 after returning from the Coral Sea but before Midway.U.S. Navy Photo

Although it survived the Battle of the Coral Sea, the USS Yorktown did not survive Midway. Photo courtesy National Archives

The USS Yorktown at Pearl Harbor in May 1942 after returning from the Coral Sea but before Midway.U.S. Navy Photo

On this date in 1942, the aircraft carrier USS Yorktown was still three days away from completing her 18-day voyage from the Coral Sea to the dry dock awaiting her at Pearl Harbor, Hawaii.

While the Battle of the Coral Sea in early May 1942 was a strategic victory for the United States in that it stopped the planned Japanese invasion of Port Moresby, it was not a sustainable victory. While the Japanese light carrier Shoho had been sunk and the fleet carrier Shokaku left heavily damaged, on the American side the USS Lexington was so damaged that she had to be scuttled, and the Yorktown barely escaped, herself heavily damaged. The U.S. Navy was in no condition to trade carrier for carrier with the numerically superior Japanese fleet.

Sobering indeed: “A 551-pound armor-piercing bomb had plunged through the flight deck 15 feet inboard of her island and penetrated 50 feet into the ship before exploding above the forward engine room. Six compartments were destroyed, as were the lighting systems on three decks and across 24 frames. The gears controlling the No. 2 elevator were damaged. She had lost her radar and refrigeration system. Near misses by eight bombs had opened seams in her hull from frames 100 to 130 and ruptured the fuel-oil compartments. Rear Adm. Aubrey Fitch, aboard the damaged carrier, estimated that repairing the Yorktown would take 90 days.”

Considering that naval intelligence had identified that the Japanese Navy was planning an assault on Midway Island on June 4, Nimitz not only didn't have 90 days, he didn't even have a week.

Zimmerman continues: “After staring at the burst seams and other damage on the hull, Nimitz turned to the technicians and said, “We must have this ship back in three days.” After a long silence, hull repair expert Lt. Cmdr. H.J. Pfingstag gulped and said, “Yes, sir.”

What would transpire over the next three days remains one of the most amazing feats in U.S. naval history. Working around the clock, more than 1,000 repairmen descended on the Yorktown. The power needed was so large that the city of Honolulu was put under rolling blackouts to ensure repair efforts did not go for naught.

When the Yorktown steamed out of Pearl Harbor on the morning of May 30 to join the USS Enterprise and the USS Hornet for the upcoming Battle of Midway, yet another example of American personnel overcoming all odds to do what could not be done was officially recorded into the annals of history.

While Yorktown would never return to Pearl Harbor (she now rests at the bottom of the Pacific Ocean, 3 miles below the surface from which she sank on June 7, 1942), her presence was critical to the American victory.

Her planes had direct hits on the carriers Soryu and Hiryu, accounting for half the total Japanese carriers sunk during the battle — a battle that without the valiant effort of repair crews just a week earlier would have never been as successful as history now records.

It had been only six months since more than 2,400 Americans lost their lives in the Dec. 7, 1941, Japanese surprise attack on Pearl Harbor. The Battle of Midway would prove to be the turning point in the Pacific, as never again would the Imperial Japanese Navy be able to assemble a force large enough to counter U.S. forces.

Though it would take another three-plus years, more than 100,000 American lives and two atom bombs to finally end the brutality that was the Japanese Empire, the beginning of the end was delivered the first week of June 1942 by a ship that would not quit and the repair crews that would not let her.

As World War II slips further and further into our past, as the headline “Last surviving WWII vet dies" looms closer with each passing day, as our younger generations learn less and less of their nation's history than the generation before them, and as many of us shake our heads in disbelief at the millions of our fellow Americans who still can’t get a haircut or take a walk on a beach, it is critical that we pause and contemplate just how fragile these freedoms are that we all too often take for granted.

Memorial Day on the calendar may only come once a year, but if we’re not remembering our fallen each and every day, we’re doing a disservice to each and every one.

Geoff Caldwell lives in Joplin. He can be reached at gc@caldwellscorner.com.