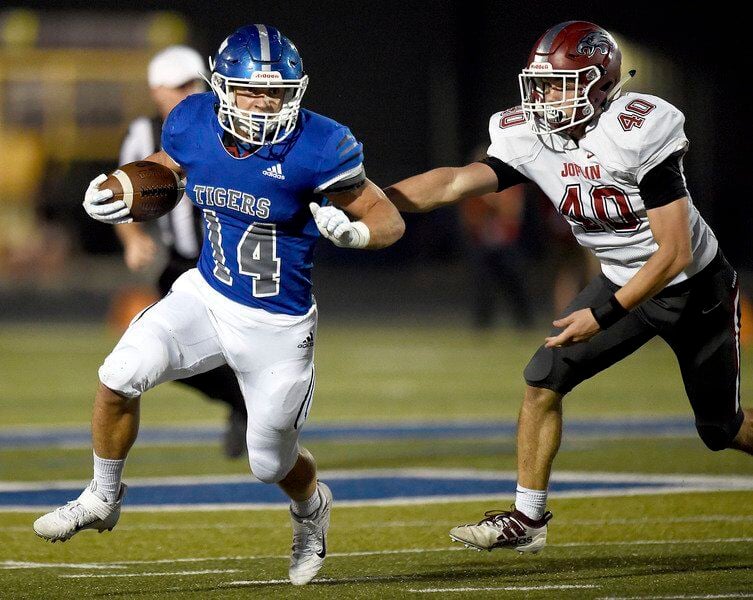 Carthage running back Luke Gall (14) gets past Joplin's Jacob Prosser during their game on Friday night at Carthage. Globe | Laurie Sisk 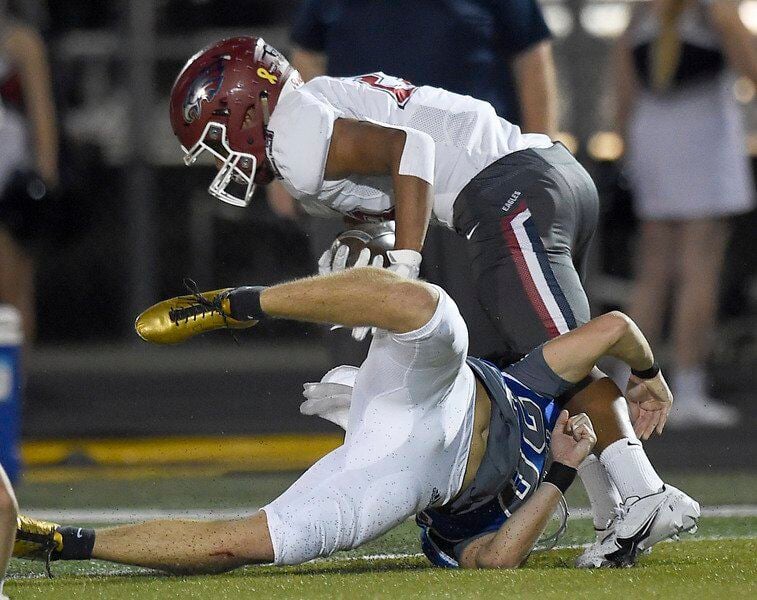 Carthage's Justin Sneed (bottom) dives for a tackle as Joplin's Trayshawn Thomas looks to get around him during their game on Friday night at Carthage. Globe | Laurie Sisk 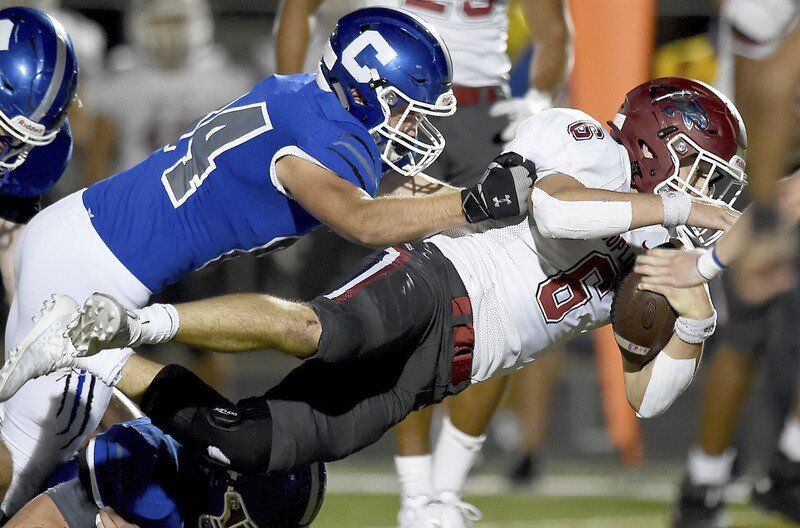 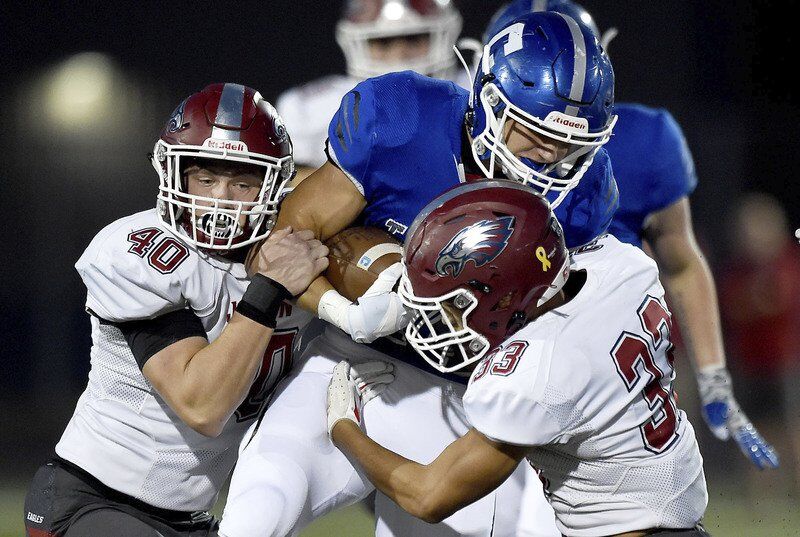 Joplin's Jacob Prosser (40) and Jayden Holt (33) team up to bring down Carthage running back Luke Gall during their game on Friday night at Carthage. Globe | Laurie Sisk 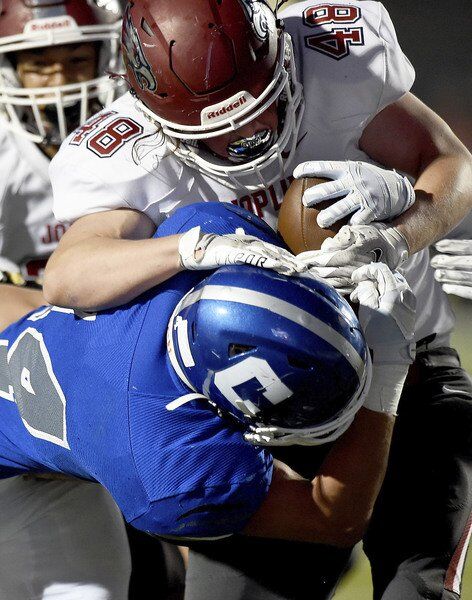 Carthage running back Luke Gall hangs on to the ball as Joplin's Marcelino Puente (48) tries to strip it during their game on Friday night at Carthage. Globe | Laurie Sisk 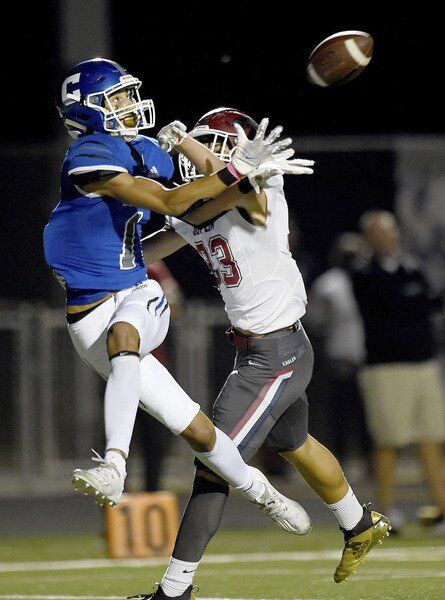 Carthage running back Luke Gall (14) gets past Joplin's Jacob Prosser during their game on Friday night at Carthage. Globe | Laurie Sisk

Carthage's Justin Sneed (bottom) dives for a tackle as Joplin's Trayshawn Thomas looks to get around him during their game on Friday night at Carthage. Globe | Laurie Sisk

Joplin's Jacob Prosser (40) and Jayden Holt (33) team up to bring down Carthage running back Luke Gall during their game on Friday night at Carthage. Globe | Laurie Sisk

Carthage running back Luke Gall hangs on to the ball as Joplin's Marcelino Puente (48) tries to strip it during their game on Friday night at Carthage. Globe | Laurie Sisk

CARTHAGE, Mo. — Championship-caliber teams typically have a knack for closing out football games on a favorable note.

And once again, the defending Class 5 state champion Carthage Tigers showed they have a cunning ability to do just that.

After seeing a 28-point halftime lead shrink to 8 in the third quarter, Carthage closed with two unanswered touchdowns to pull away from Central Ozark Conference foe Joplin for a 41-20 win Friday night at David Haffner Stadium.

The triumph avenged a 56-55 setback to the Eagles from a year prior, and it also improved the Tigers’ season record to 6-0. With previously-unbeaten Nixa falling on the road to Webb City, Carthage stood as the last undefeated team in the COC.

An 83-yard punt return for a touchdown by Joplin senior Nathan Glades pulled the Eagles to within 28-20 of Carthage with 6:29 left in the third quarter. However, Carthage responded with a 16-play, 86-yard scoring drive that milked more than nine minutes of game clock and pushed the lead back to two touchdowns at 35-20.

The final play of the pivotal Carthage drive saw senior quarterback Patrick Carlton dump a pass out in the flat to sophomore running back Luke Gall, who scampered 35 yards along the visitors’ sideline before reaching paydirt.

“That’s what I love about this group of kids,” Carthage coach Jon Guidie said. “They didn’t freaking hang their heads. They didn’t let things get them down. It got hairy (in the third quarter), and our kids just stayed with it. … That’s just a huge testament to these guys’ character.”

The Joplin offense, hindered by a barrage of penalties throughout the night, failed to respond on its ensuing drive and ultimately saw a pair of holding penalties lead to a turnover on downs.

Carthage then put the nail in the coffin with a 53-yard drive that was capped by a one-yard touchdown run by Carlton — his fourth rushing touchdown of the night — to extend the lead to 41-20 with 1:53 remaining.

“I thought we did some good things and played really hard in the second half, and then we had some momentum with that punt return that made it a one-score game,” Joplin coach Curtis Jasper said. “But Carthage is just a good team, and we made too many penalties and too many mistakes to beat a really good team.”

Both teams accounted for more than 320 yards of offense, but Joplin ultimately couldn’t keep up with Carthage on the scoreboard due to 10 penalties — three in the red zone — and a pair of turnovers.

Perhaps the most costly mistake for Joplin came near the end of the first half. The Eagles were threatening to cut the Carthage lead to one touchdown before a pass by junior quarterback Always Wright was intercepted and returned 47 yards by Carthage senior defensive back Patrick Sneed.

Carthage cashed in on Joplin’s mistake just three plays later when Carlton bulldozed his way up the middle for a two-yard touchdown run, pushing the Tigers’ lead to 28-7.

“That turnover was huge,” Guidie said. “And not only that, but his return to get us into (Joplin) territory to give us a chance to score there was unbelievable. When you go into halftime up three scores instead of two … that was really, really big.”

It also punctuated a dominant first-half performance for Carthage, which scored on each of its first four drives.

The Tigers received the game’s opening kick and went on a methodical 11-play, 70-yard drive that ended with a one-yard touchdown run by Carlton. And after a quick three-and-out on Joplin’s first drive of the night, Carthage took a two-touchdown lead thanks to a score on a jet-sweep pass from junior wide receiver Caden Kabance to sophomore wide receiver Hudson Moore.

The Eagles found their offensive footing later in the second quarter when Glades punctuated a 66-yard drive with a one-yard touchdown run, briefly trimming the Carthage lead to 14-7.

Glades was the featured weapon for Joplin and finished with 74 yards on 25 carries, as well as 42 yards on seven catches, while pulling most of the return duties for the Eagles.

“He’s a real competitor who does a great job for us,” Jasper said. “He’s going to keep fighting and keep competing no matter what.”

“He’s such a talented kid,” Guidie said of Glades. “You don’t want to let him loose anywhere. We tried to kick it away from him every time, and we certainly didn’t want to have to punt it to him.”

Wright completed 20-of-30 passes for 202 yards. He finished with one touchdown pass — a 23-yard connection to Landen Artherton early in the third quarter — and one interception.

The Carthage offense, totaling 363 yards, was led by Carlton, who amassed 152 yards on 27 carries. Gall was the team’s next leading rusher with 64 yards on 21 carries.

“We wanted to dominate the line of scrimmage, really on both sides, but particularly with the offensive line,” Guidie said. “So we wanted to come out with that mentality, and we did.

“I thought Patrick had a really big night and a very unselfish night. He carried the ball, did what he needed to do. And then, like we talked about up front, those guys were big tonight.”