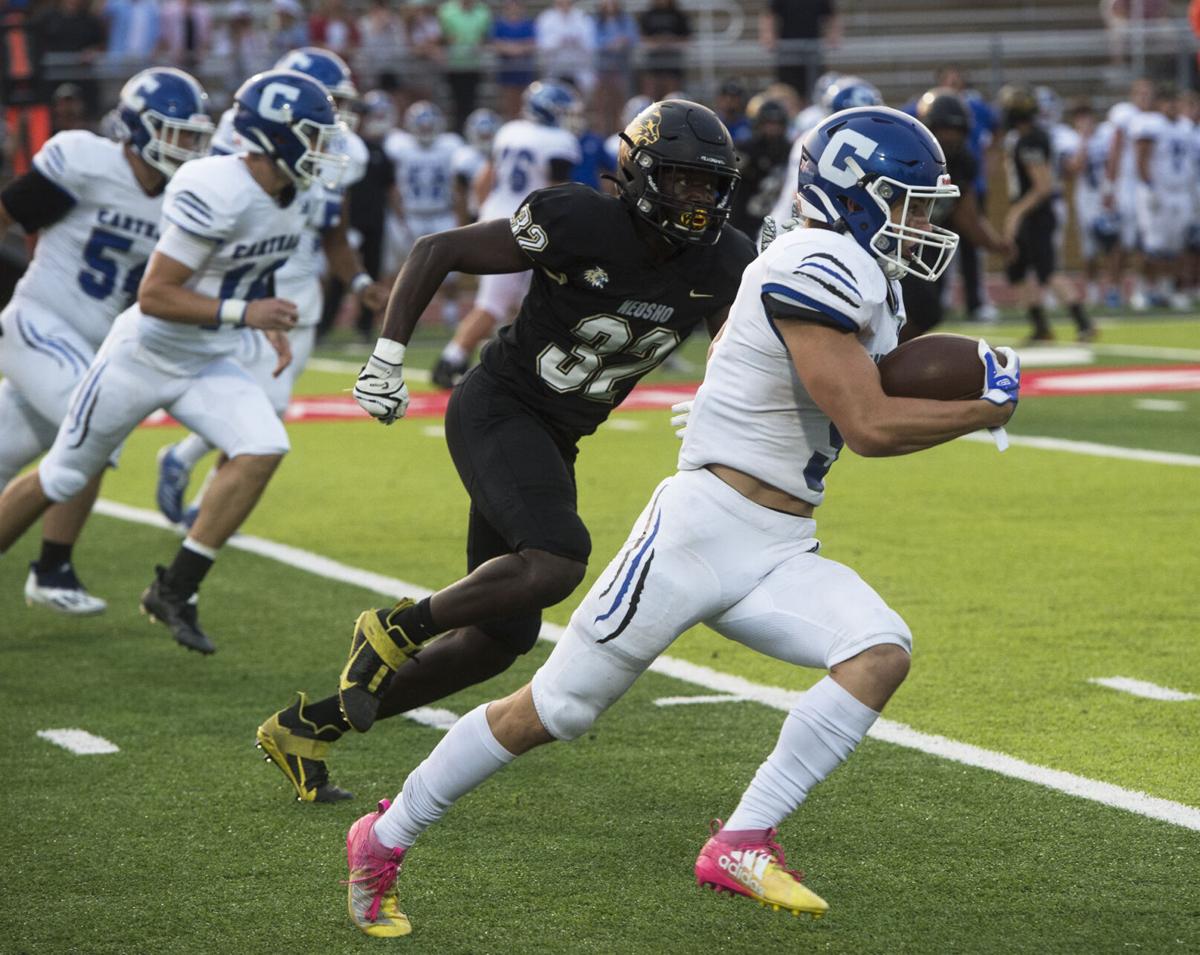 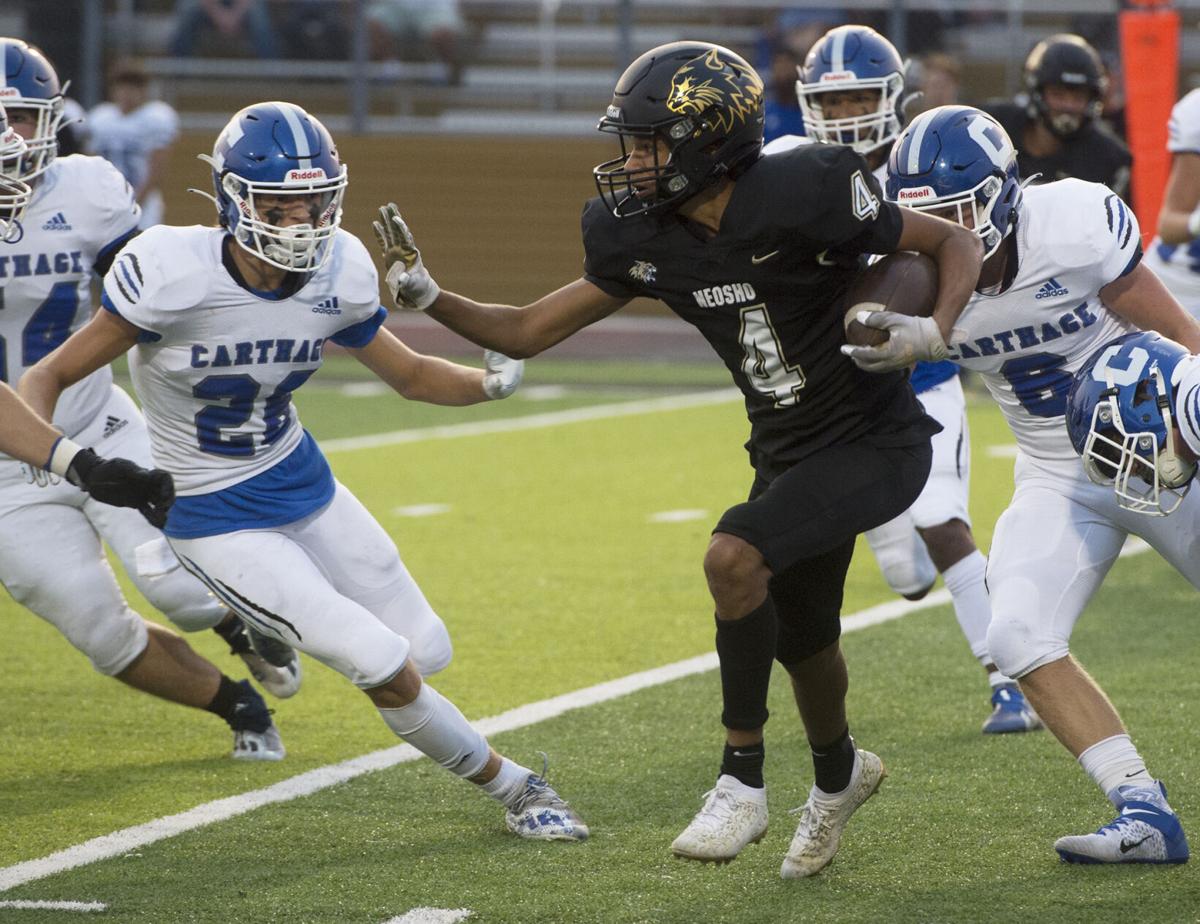 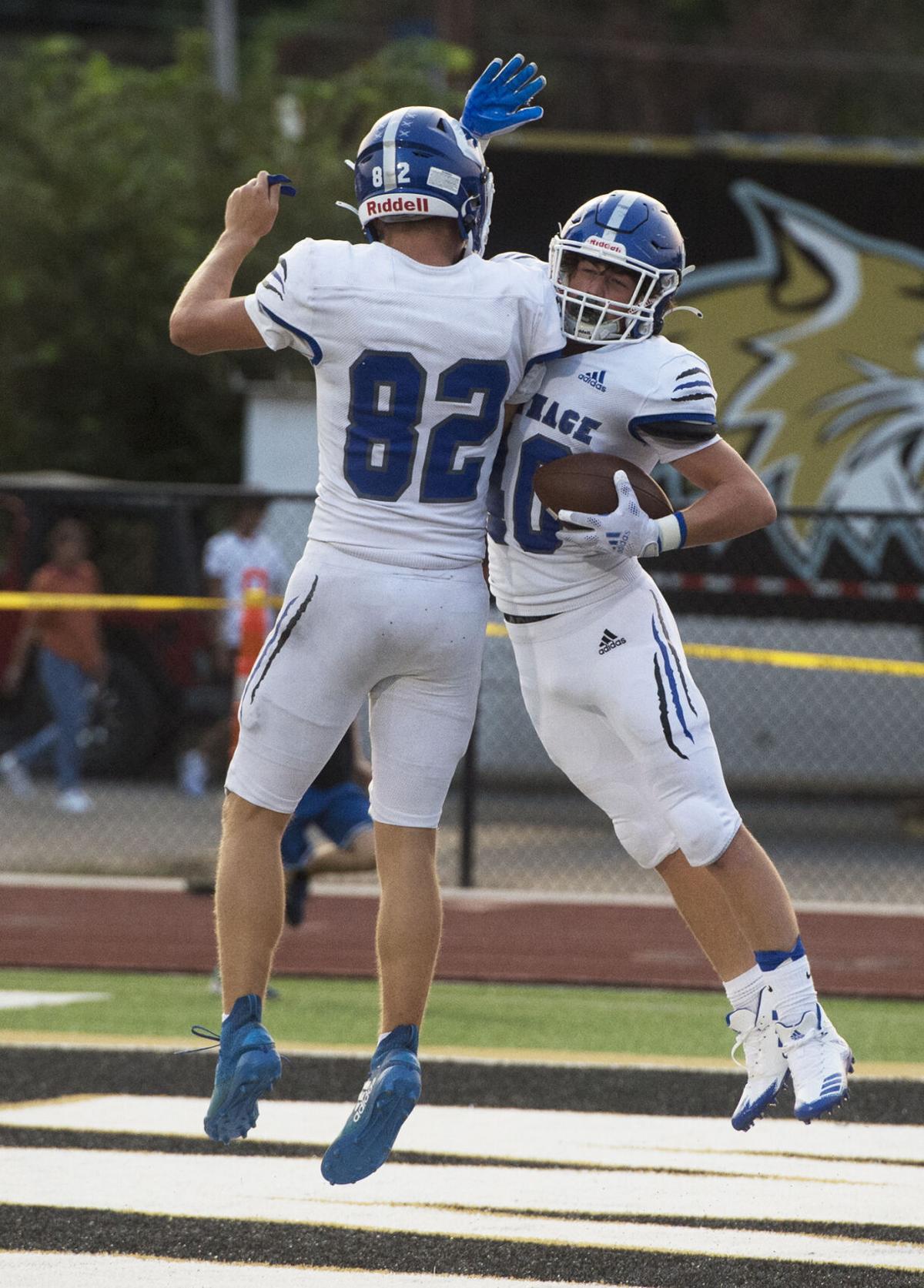 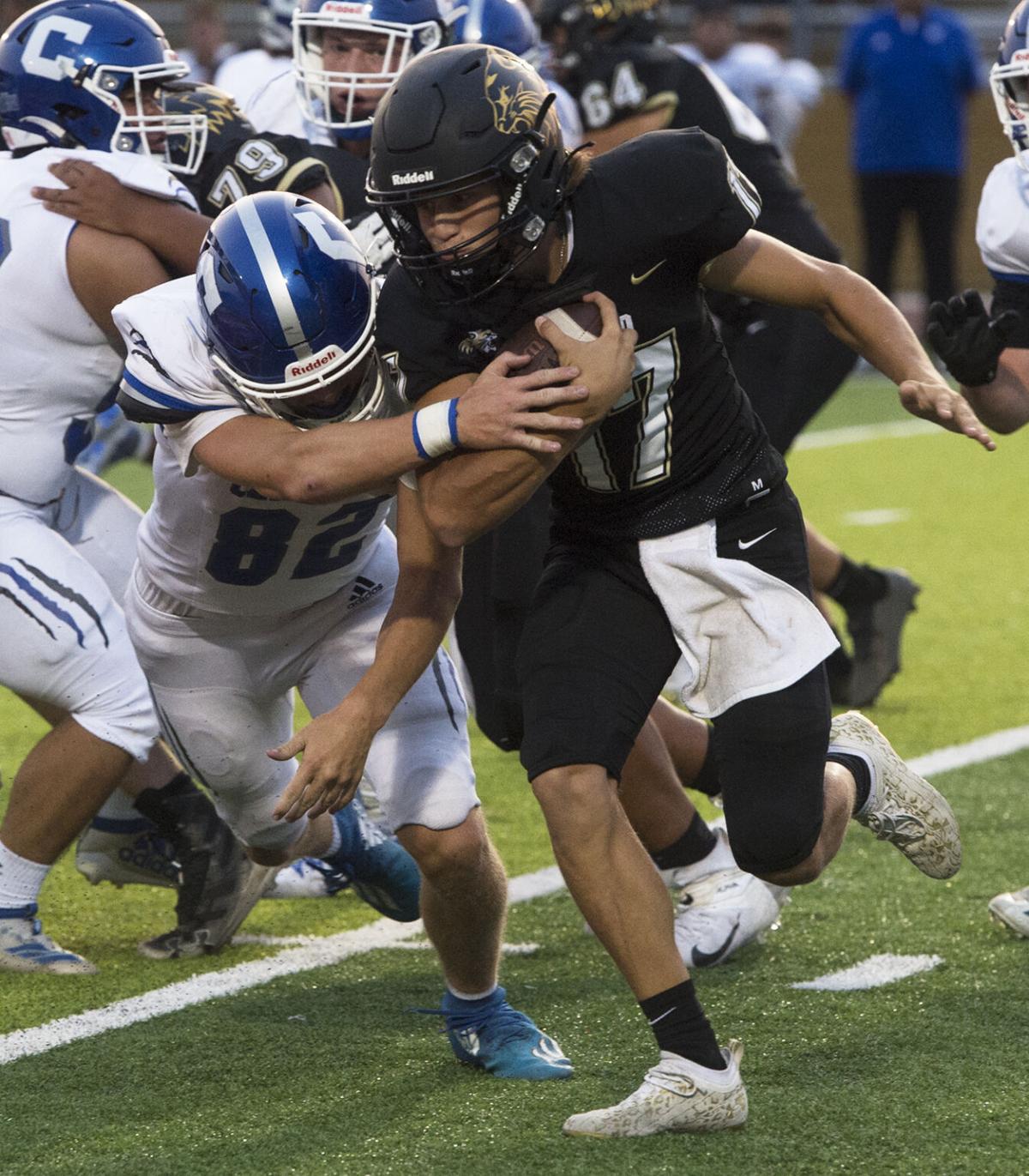 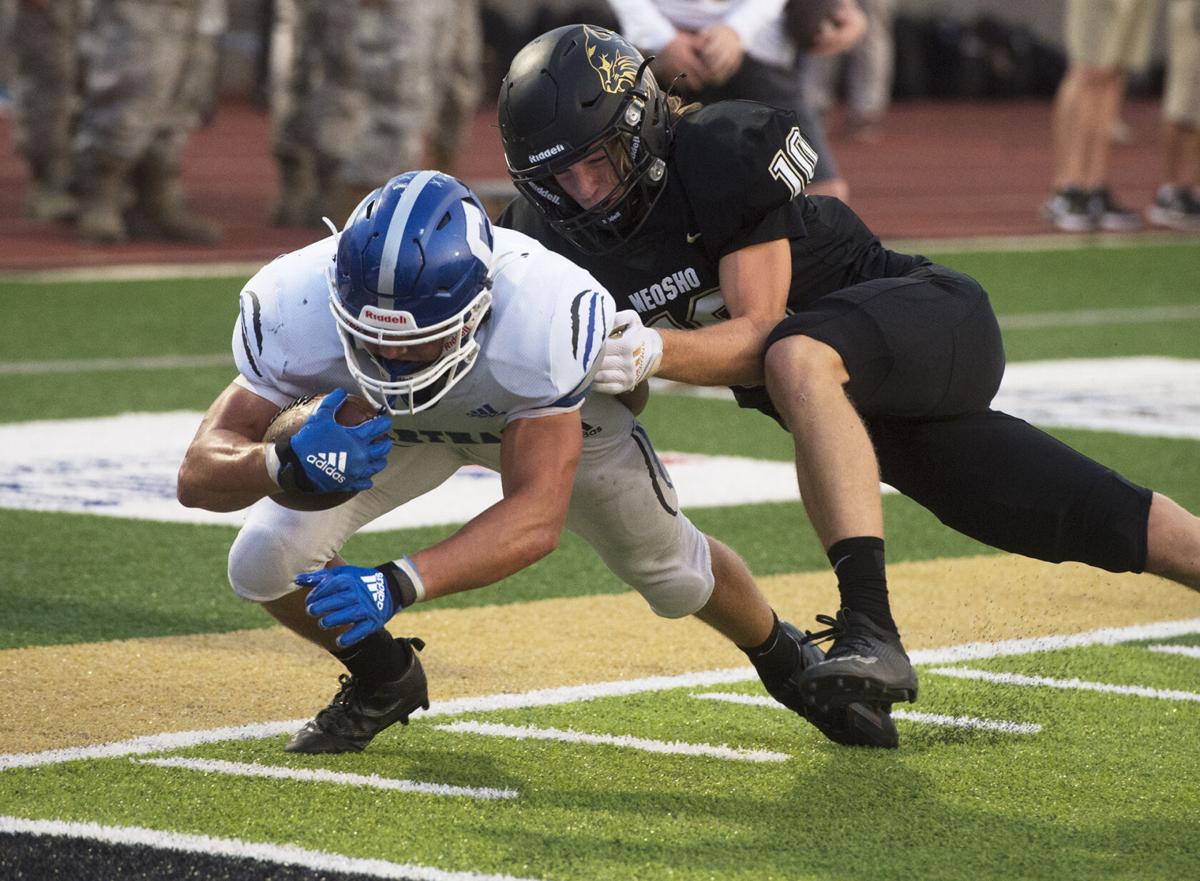 Carthage’s Luke Gall lunges for the endzone as he is tackled by Neosho’s Collyn Kivett during Friday’s game at Neosho High School. 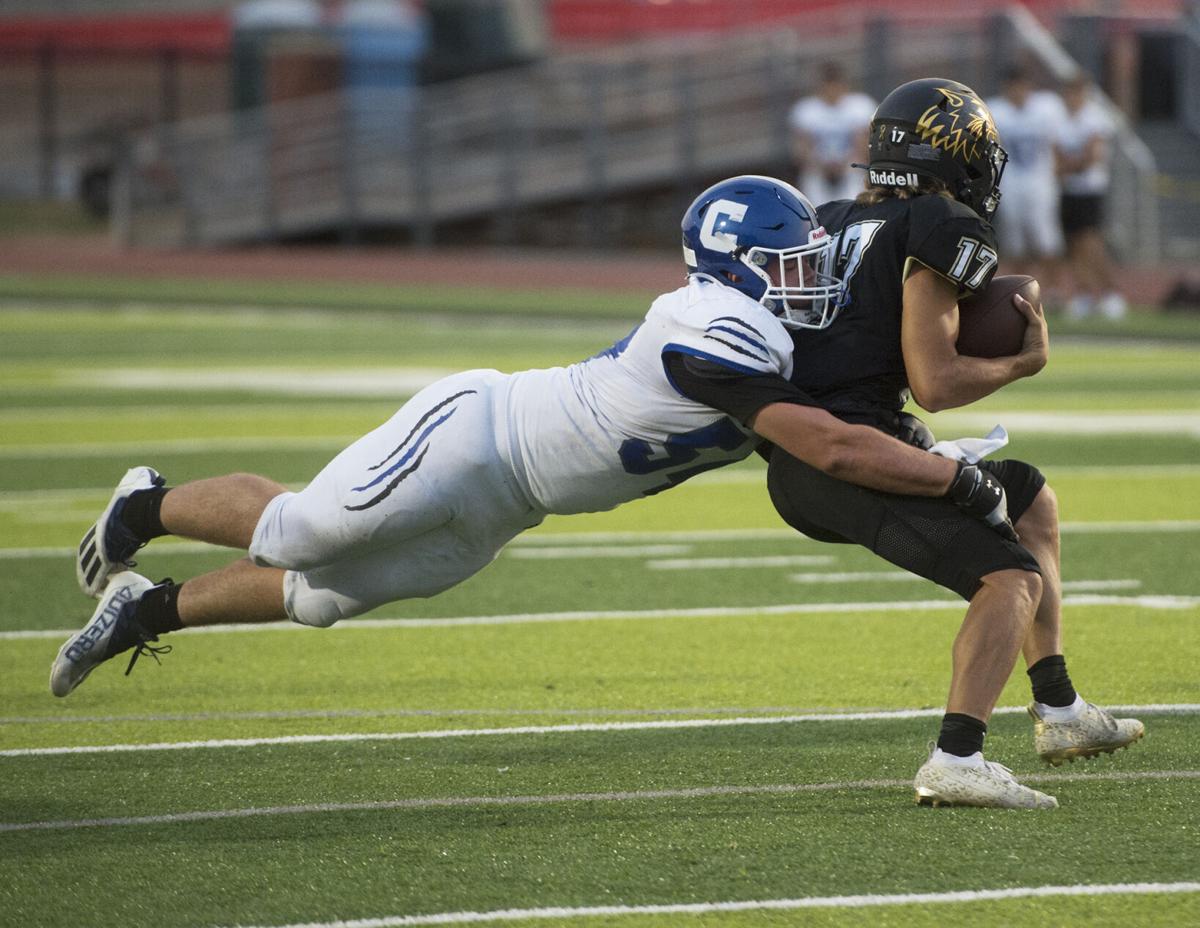 Carthage’s Luke Gall lunges for the endzone as he is tackled by Neosho’s Collyn Kivett during Friday’s game at Neosho High School.

The Carthage Tigers’ running game was dominant in a 71-14 win on Friday over the Neosho Wildcats, and Coach Jon Guidie gave most of the credit to the six guys pounding the trenches on the offensive line.

“Probably credit should go to our offensive line,” Guidie said. “All five of them, I can name them for you because they deserve it — Gavin VanGilder, Garrett Lilienkamp, Anthony Strickland, Malachi Housh and Micah Lindsey. and I’ll throw in the tight end, Tyler Willis. He certainly does a great job too, but I thought those guys were fantastic. We’ll probably go back and watch some film and find some things wrong, but I thought they did a really good job of executing.”

Neosho looked like it was going to make a game of it when the Wildcats returned the opening kickoff 60 yards to Carthage’s 24-yard line, but the Tigers’ defense stifled the threat, took the ball away on downs and the avalanche began.

The Tigers scored on every possession of the first half, putting up 57 points by halftime while allowing the Wildcats only seven points.

The Tigers rushing game led the way with 530 yards on the night. Junior running back Luke Gall rushed for 210 yards and four touchdowns on only 11 carries for a 19-yard-per-carry average.

Senior quarterback Caden Kabance rushed for 59 yards and two touchdowns on only three carries, while Bradyn Tate, Mason Rose and Clay Kinder each scored touchdowns on the ground as well.

Kabance threw only four passes, completing three of them for 75 yards and a touchdown to Senior tight end Brett Rockers.

Neosho junior running back Jared Siler rushed 16 times for 89 yards and both of the Wildcats’ touchdowns in the losing effort.

Neosho Head Coach Brandon Taute said he wasn’t surprised to see the Tigers execute so well on both sides of the ball.

“Carthage is a good program. We knew they would come in and play mistake-free football and that’s exactly what they did,” Taute said. “We’ll go back to work tomorrow and try to get better. We’ve got really good kids and they’ve got great character and great heart. So I’ve got no doubt in my mind that they’ll respond from this and we’ll be able to bounce back.”

The Tigers’ challenge next week is to put this win behind them and prepare for the biggest game of the year thus far against rival Webb City.

But Guidie said he had no doubts about his team’s readiness for the next big challenge.

“With this group, I don’t think it’s an issue,” Guidie said. “They’re a very serious group and know what preparation means and it doesn’t matter who we are playing, whether it’s anybody, we’re going to go out and prepare like we always do.”