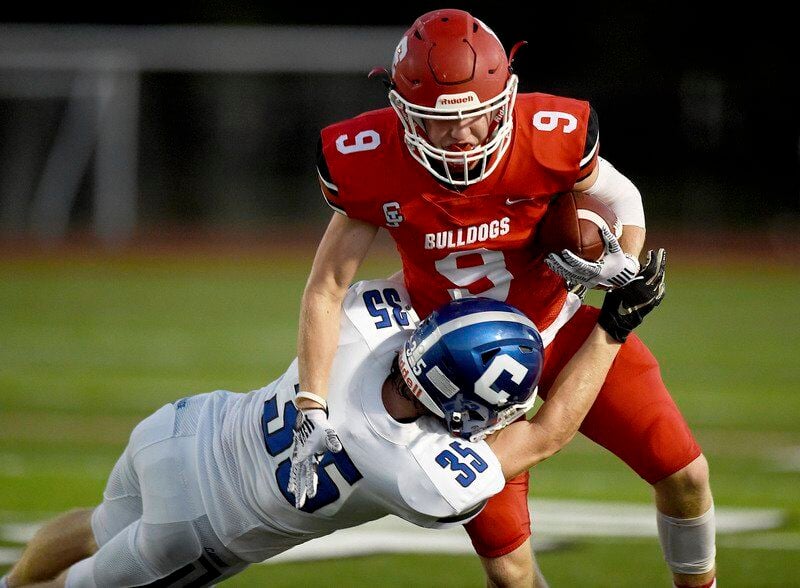 Carl Junction runningback Brady Sims (9) tries to get past Carthage defensive back Caleb Calvin (35) during their game on Friday night at CJHS. Globe | Laurie Sisk 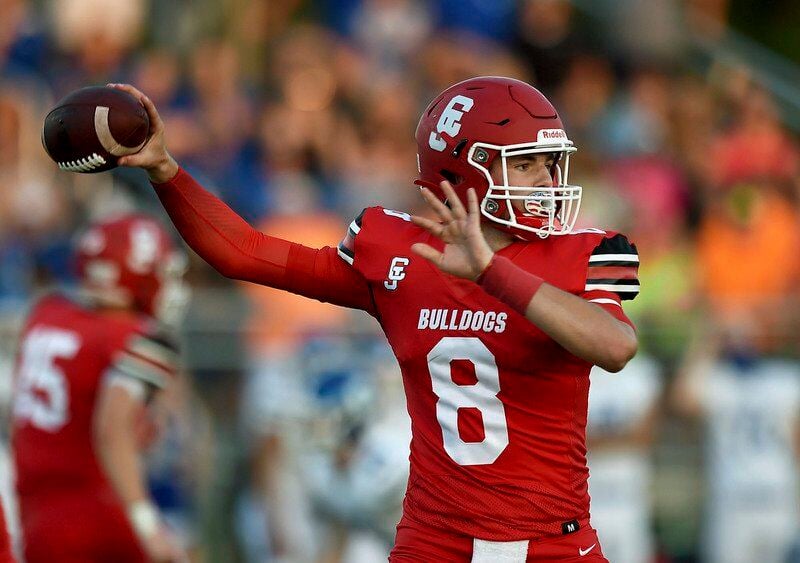 Carl Junction quarterback Alex Baker passed for 2,882 yards and 28 touchdowns this season after missing all of the 2019 season with injuries.Globe | Laurie Sisk 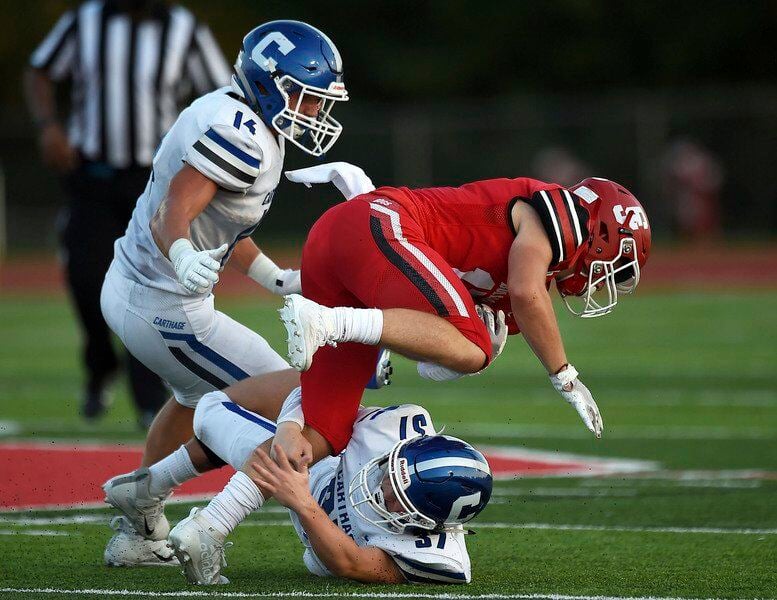 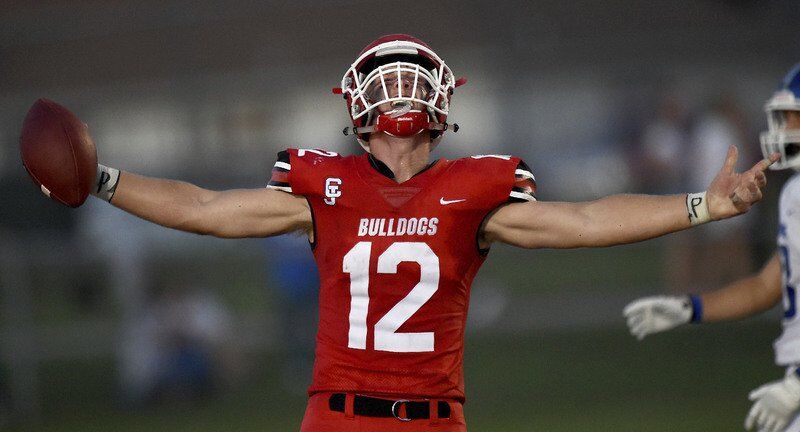 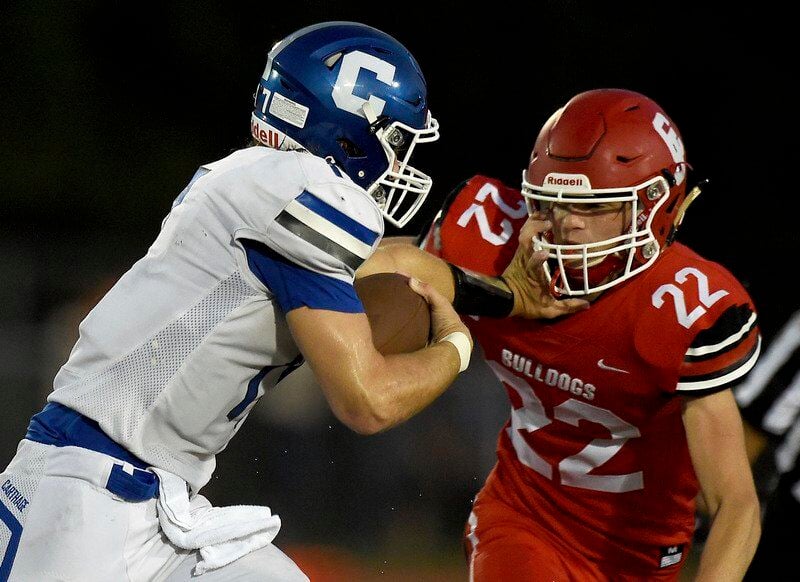 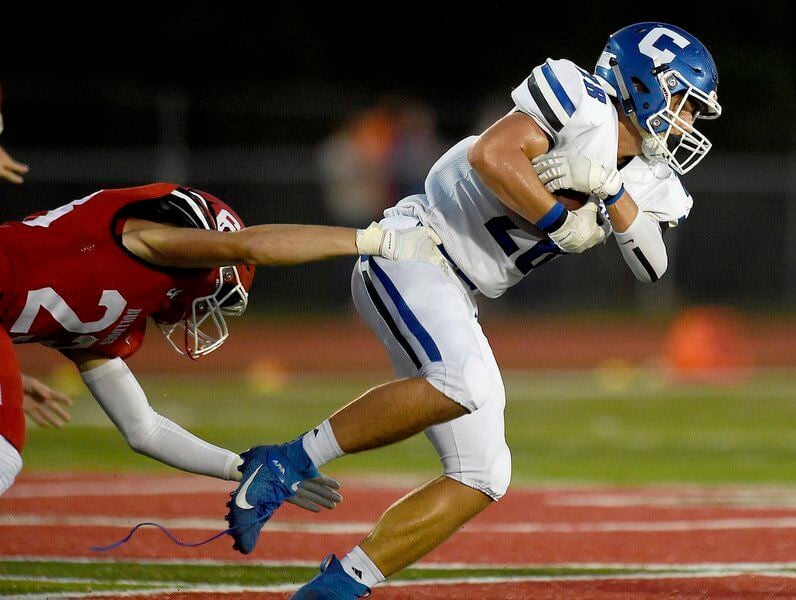 Carl Junction runningback Brady Sims (9) tries to get past Carthage defensive back Caleb Calvin (35) during their game on Friday night at CJHS. Globe | Laurie Sisk

Carl Junction quarterback Alex Baker passed for 2,882 yards and 28 touchdowns this season after missing all of the 2019 season with injuries.Globe | Laurie Sisk

For Carthage, Friday’s certainly wasn’t in the opening half. But despite a turnover-riddled night and a 13-point deficit at halftime, the Tigers managed to score 14 unanswered points in the final 16 minutes to edge Carl Junction 21-20 in a Central Ozark Conference tilt at Bulldog Stadium.

“It was similar to last week,” Carthage coach Jon Guidie said. “We had the turnovers. … But it just felt like the whole time we were in in control of that, as odd as it may seem. It was just a matter of time before we ironed some things out, and I thought our coaches did a great job at halftime with some adjustments up front and defensively. Our kids came out and executed in the second half. We battled through some adversity, which you love to see in Week 2.”

The de facto game-winning score for Carthage came on a fourth down-and-goal play from the CJ 8-yard line, when senior quarterback Patrick Carlton delivered a long out pass from the right hash mark and connected with sophomore wide receiver Hudson Moore on the far left side of the end zone. Caleb Calvin's ensuing PAT gave the Tigers a one-point advantage with less than six minutes to go.

The score was made possible by a pivotal fourth-down conversion that came a few plays earlier when Moore was ruled by the officials to have caught a low pass from Carlton for a 15-yard gain. The Carl Junction coaches disputed the call, claiming the ball “short hopped” off the playing surface before Moore handled it.

“The ball bounced before he caught it,”Bulldogs coach Doug Buckmaster said. “I knew it. Everybody on our sideline knew it. And the (official) on our sideline knew it, and he went over and told them the ball bounced. But the other three (officials) said it didn’t bounce. … They missed that call. I felt like I was playing at Gilette Stadium against the Patriots, or at Arrowhead Stadium against the Chiefs. And I was the home team.”

The Bulldogs had a crack at a go-ahead score with under two minutes remaining when a 21-yard pass from senior quarterback Alex Baker to senior receiver Drew Patterson brought them to the Carthage 35. But one sack and three incompletions later, CJ turned the ball over on downs and allowed Carthage offense to milk the remaining time off the clock.

“The momentum shift occurred in the third quarter whenever we continually gave up first downs on long pass plays,” Buckmaster said. “We’d do well on the first three downs and then give up the big play. That allowed them to control the ball for much of the second half.

“The kids played well enough to win. We just didn’t get it done at the end. … Our kids played hard and we came up with the short end of the stick.”

Carlton had to shake off four turnovers he committed within the first 25 minutes of the game, but his play down the stretch proved pivotal for the Tigers — who struggled to figure out Carl Junction’s run defense throughout the night — during the second-half comeback, according to Guidie.

“He kept his head in the game tonight and showed a lot of poise, a lot of leadership,” Guidie said of Carlton. “When the game was on the line, this kid wanted the football.”

The Carthage signal caller finished 10-of-17 passing for 127 yards, one touchdown and one interception. He also had 20 carries for 124 yards and another touchdown. Moore was the recipient of Carlton’s last five completions and recorded 59 yards receiving on the night.

Carl Junction put itself in the driver’s seat in the second quarter as it rattled off 20 points, all coming on touchdown passes by Baker. The first came on a 4-yard completion to Patterson, and after CJ recovered a squib kick on the ensuing kickoff, Baker hit senior receiver Cole Stewart in stride for a 37-yard TD pass down the right sideline. The PAT missed.

After falling in a 13-0 hole, Carthage finally responded with a 50-yard scoring drive that was capped by a 2-yard TD run by Carlton.

The Bulldogs accounted for the final score of the first half when Baker connected with Noah Southern for a 43-yard TD pass, giving CJ its 13-point halftime lead.

Carthage pulled to within 20-14 when Cale Patrick scored on a 15-yard sweep with 3:57 left in the third quarter.