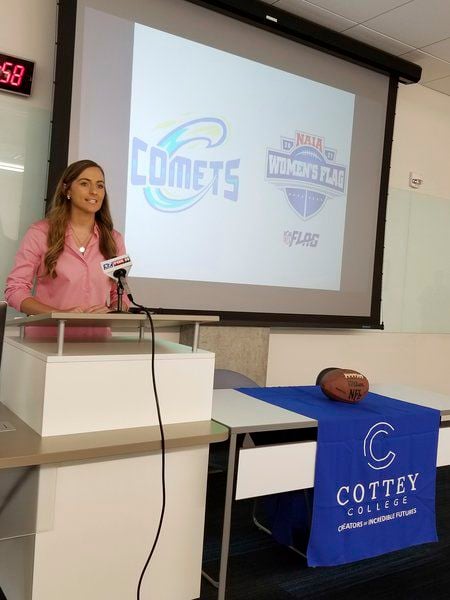 Head coach Madeline Culbertson meets the press on Thursday afternoon as Cottey College announces it is adding women’s flag football to its athletics department. The sport will become an official NAIA varsity sport and begin play in the spring of 2021.GLOBE | Jim Henry 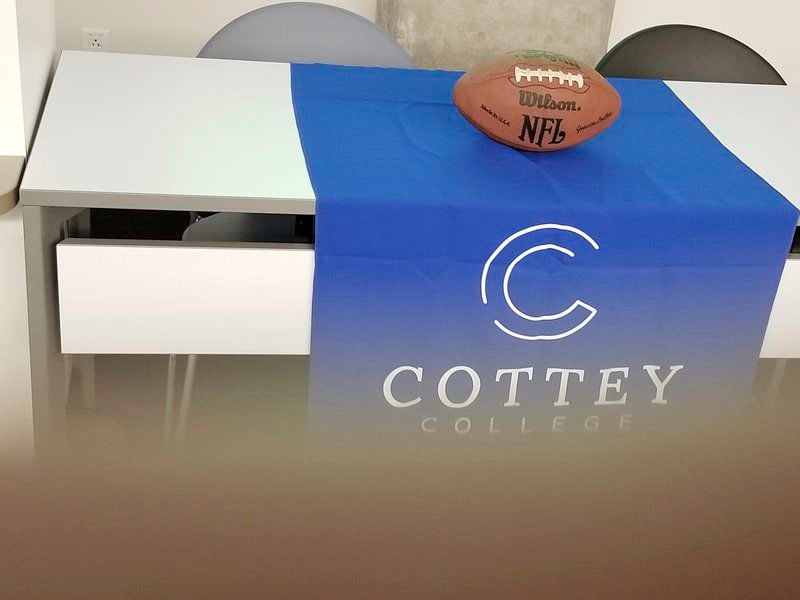 Head coach Madeline Culbertson meets the press on Thursday afternoon as Cottey College announces it is adding women’s flag football to its athletics department. The sport will become an official NAIA varsity sport and begin play in the spring of 2021.GLOBE | Jim Henry

NEVADA, Mo. — The NAIA is adding a new sport next year, and Cottey College has quickly signed up.

The four-year women’s college will be fielding a flag football team in the spring of 2021, it was announced at a Thursday afternoon press conference on campus at the Rogers Fine Arts Building.

On May 4 the NAIA and National Football League announced their intentions to have flag football as an official NAIA sport by 2021. It’s a 7-on-7 game played on a field 80 yards long and 40 yards wide.

“We are proud to announce that Cottey is one of the founding institutions to declare its intent to launch a women’s flag football program in the 2020-21 academic year,” school president Dr. Jann Weitzel said. “Women’s flag football is an up-and-coming sport in America. We’re very excited to be on the leading edge of this sport and to give young women from around the country an opportunity to showcase their talents and grow academically.”

With its quick action, Cottey is the first college or university in Missouri and the first women’s college nationally to offer the sport.

“That’s something we’ve advertised a lot,” athletics director Stephanie Beason said. “We want to be a part of the groundbreaking experience. With our background of leadership and women empowerment, I think that fits perfectly into what Cottey does.”

A head coach is in place as Madeline Culbertson, who was already on campus as enrollment counselor, has taken the job. David Heringer, vice president for enrollment management, is one assistant coach. More may be hired later.

“They came to me, but I’m just happy to help,” said Culbertson, a 2016 Nevada High School graduate. “I’ve had the opportunity to play flag football a couple of times in intramurals (at William Jewell, where she played softball for three years).

“I coached softball a couple of summers for a travel team, and I absolutely loved it. I’m excited to get to work with these young women and give them my experience of playing college athletics and guide them toward success in the sport.”

Florida, Georgia, Nevada and California are among the states who play flag football in high school.

“I’m excited to be a part of the recruitment process,” Culbertson said. “We currently have four 2020 applicants for this coming season and five others starting the application process.”

The goal is to have a squad of 11 or 12 the first year, and the Comets will play a six-game schedule to start and probably a 10- to 12-game slate after that as more schools start to play.

Filling the schedule shouldn’t be a problem, Beason said. Ottawa and Kansas Wesleyan of the KCAC have already declared their intent to play, and a third conference school — Saint Mary in Leavenworth, Kansas — as well as Midland College in Fremont, Nebraska, have indicated they will play.

The Comets will play their home games at Nevada High School’s Logan Field. Games likely will be played on Saturday, and three teams are expected at one site for round-robin competition and to reduce travel costs.

“The first year (the NAIA) is hoping for 15 to 20 schools to declare,” Beason said. “I would venture to guess this will grow a little more in Year 2 once institutioins have a little more time to get the financials and everything behind it.”

The NAIA plans to hold an emerging sport (minimum 15 teams) or invitational championship (minimum 25 teams) next spring. At least 40 teams are required for the sport to be considered for full championship status.