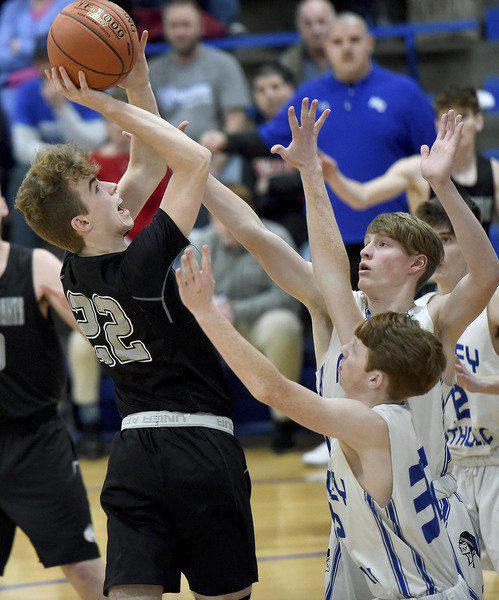 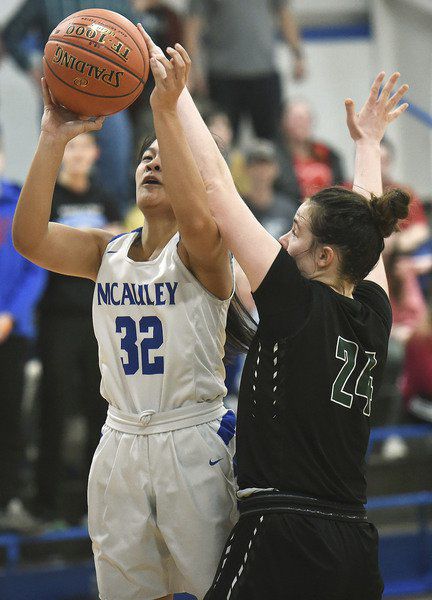 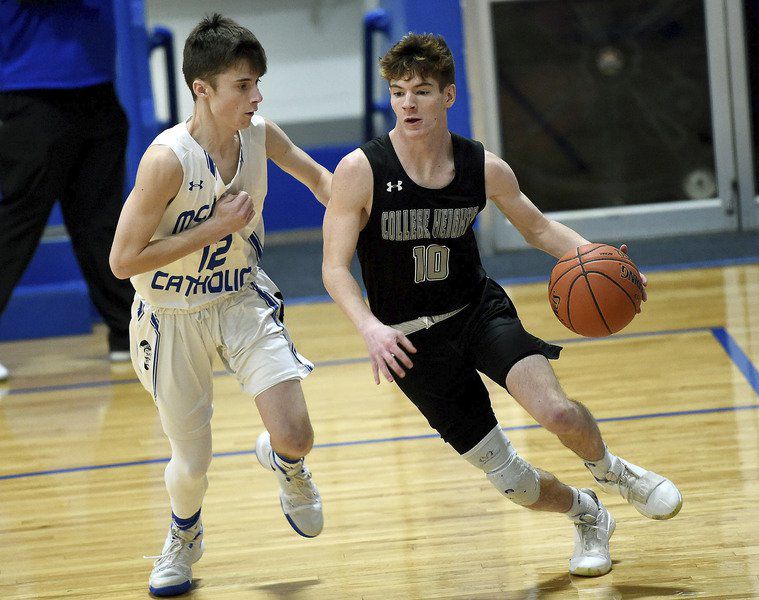 College Heights' Caleb Wicklund (10) tries to get past McAuley's Jake Staton (12) during their game on Friday night at McAuley. Globe | Laurie Sis 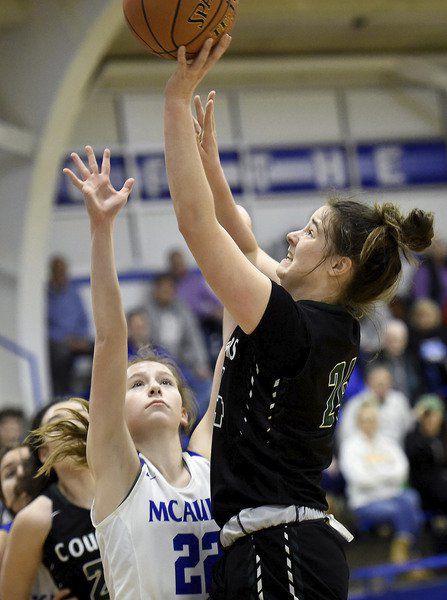 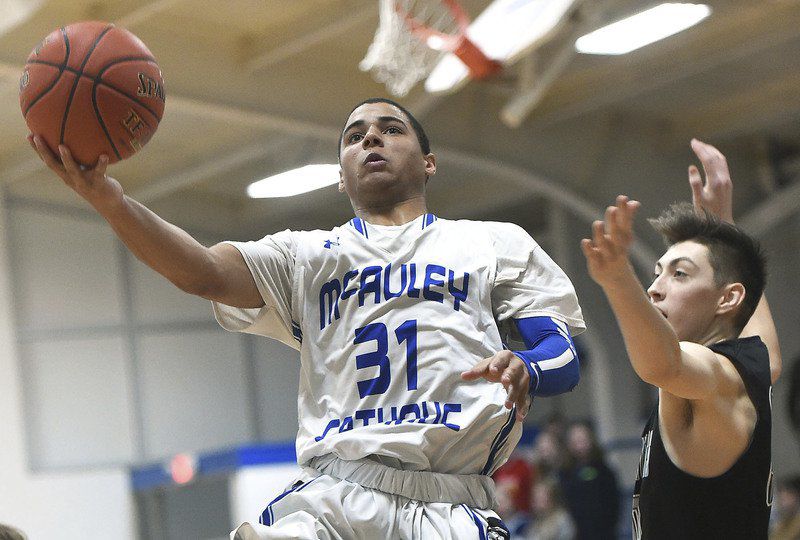 McAuley’s Michael Dohman gets past College Heights’ Hagen Beck for a layup on Friday night at McAuley. Globe | Laurie Sisk

College Heights' Caleb Wicklund (10) tries to get past McAuley's Jake Staton (12) during their game on Friday night at McAuley. Globe | Laurie Sis

McAuley’s Michael Dohman gets past College Heights’ Hagen Beck for a layup on Friday night at McAuley. Globe | Laurie Sisk

With both teams sitting atop the standings with identical 4-0 Ozark 7 records, the matchup between the College Heights Christian and McAuley Catholic girls basketball teams on Friday had huge ramifications.

“We had prepared hard for tonight,” College Heights coach John Blankenship said. “We watched a lot of game film and had a couple walk-throughs. We knew it was important to get off to a good start on their home floor with a chance at the conference championship on the line. … The kids showed up tonight and just did a fantastic job.”

“We had trouble dealing with their intensity, as well as our inability to stop their penetration and the screen and roll,” McAuley coach Mike Howard said. “We didn’t come out with the mindset that we had to play hard to beat this team. They came out with a great game plan and that made all the difference in the world in the first quarter.”

College Heights now sits alone in first in the Ozark 7 Conference standings, clinching at least a share of the conference title. The Cougars have one more league game left, a matchup with Golden City on Monday at College Heights. If the Cougars win, they are the outright conference champions.

“That will be a tough game,” Blankenship said. “If we win, we win the conference outright. But building momentum heading into district is also very important.

“We get to play on our home court, so it will be a nice way to send the seniors out. We are excited to play. We know they are a good team, and we will do our best to be prepared.”

College Heights raced out to a 5-0 lead after Emmy Colin found Lainey Lett on the break, with Lett getting fouled and converting the free throw for a three-point play, before Colin scored on the drive.

Kennedy DeRuy scored inside to get the Warriors on the board before Colin converted a basket and Klohe Burk added a fast-break layup and a 3-pointer from the wing to put the Cougars on top 12-2 with five minutes left in the opening period.

College Heights held the pace into the intermission and built the margin to 20 points early in the third when Lett scored inside the paint to make the score 37-17 and held that momentum until the final horn.

The Cougars, who finished with four players scoring in double figures, were led by Colin’s game-high 19 points. Lett and Catie Secker each scored 14 points, while Burk finished with 13.

“Emmy has had to carry the load for us over the last several years, but we have grown a lot as a team,” Blankenship said. “We have three or four kids capable of scoring in double-digit points every night. Lainey Lett really stepped up big for us tonight.”

Taylor Schiefelbein scored 14 points to lead the Warriors, who travel to Bronaugh on Tuesday. DeRuy and Gliza Damaso each scored nine.

The College Heights boys took a three-point advantage into the fourth quarter and held off McAuley down the stretch.

“It was a hard-fought game on both ends,” College Heights coach Eric Johnson said. “It was very physical. … Come district time, this is the type of game you are going to play. (Getting the win tonight) really shows that you know how to handle this type of situation.”

“We really came out and set the tone on the defensive end, playing a lot better than we did early on in the season,” McAuley coach Austin Grotts said. “Even though we didn’t get the win, I am happy with the way we fought and the way we were in that game at the end.”

College Heights’ Miller Long drove baseline near the 4:45 mark of the fourth for a layup to push the lead to 46-41. After a free throw on the front end of a 1-and-1 by Caleb Wicklund, Long drilled a corner 3-pointer with 3:50 to play to push the CHC lead to 50-41.

“Miller hit some key baskets for us tonight,” Johnson said. “He ended up in foul trouble, but we were fortunate to have some other kids step up when we needed it.”

Michael Dohmen knocked down a 3-pointer on the next possession to the lead back to two possessions, 50-44.

After trading baskets and charities, College Heights’ Noah Evans grabbed an offensive rebound for a putback score with less than a minute to play to make the score 56-45, sealing the win.

College Heights takes on Golden City on Tuesday, while McAuley travels to Bronaugh.