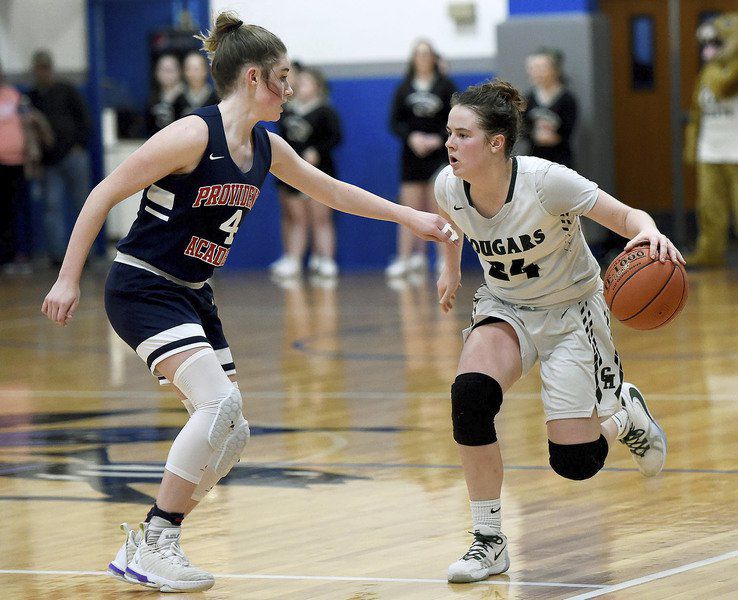 College Heights’ Emmy Colin (24) looks to get past Providence’s Hannah Weidman (4) during the championship game at the Mercy Warrior Classic on Saturday at McAuley.Globe | Laurie Sisk 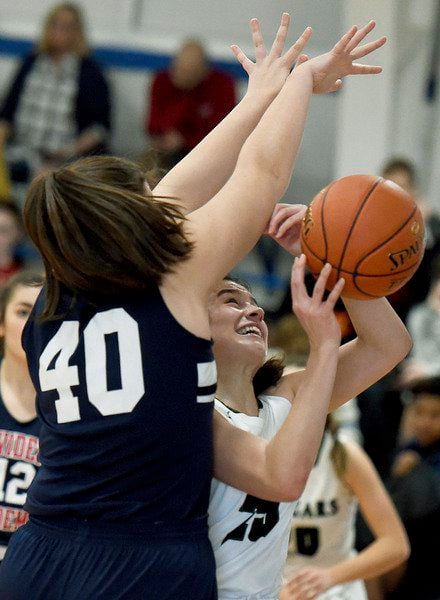 College Heights' Lainey Lett (25) drives to the basket as Providence's Abigail Russell (40) defends during the championship game at the McAuley Warrior Classic on Saturday at McAuley. Globe | Laurie Sisk

College Heights’ Emmy Colin (24) looks to get past Providence’s Hannah Weidman (4) during the championship game at the Mercy Warrior Classic on Saturday at McAuley.Globe | Laurie Sisk

College Heights' Lainey Lett (25) drives to the basket as Providence's Abigail Russell (40) defends during the championship game at the McAuley Warrior Classic on Saturday at McAuley. Globe | Laurie Sisk

A change in defensive strategy paid off for the Providence Academy Patriots on Saturday night.

After falling in a 14-point hole early in the game, the Patriots switched things up defensively, grabbed all the momentum and rode a big third quarter to a 62-49 victory over College Heights Christian in the girls championship game of the Mercy Warrior Classic at McAuley Catholic High School.

The defensive adjustment, switching to a box-and-one on College Heights’ standout Emmy Colin, seemed to jumpstart the Patriots, while the Cougars began to struggle offensively.

“We have two offenses we run, and we didn’t execute either one of them,” College Heights coach John Blankenship said. “I’m not sure why. We know it and we’ve worked on it. We couldn’t execute our offense. We just had one of those nights where we didn’t shoot well. We ended up shooting 24 percent from the floor. It’s hard to beat a quality team when you shoot like that.”

Ignited by their defense, Providence Academy scored 17 unanswered points in a game-changing run that spanned the end of the second quarter and the early stages of the third period.

“Our intensity on defense picked up,” Patriots coach Jeff Daniels said. “Once we relaxed and just started playing, it really helped us. Offensively, we did a better job of spacing. We spread out and they couldn’t load up their defense.”

The Cougars led 17-4 after Colin hit her fourth trey of the opening frame.

“We got off to a good start,” Blankenship said. “Our defense was good. Their post player (Butler) started hurting us inside, and that made a big difference.”

Klohe Burk’s 3-pointer gave the Cougars a 32-18 advantage in the second quarter, but the Patriots suddenly grabbed the momentum after the defensive change.

Providence closed the first half on a 10-0 surge, trimming their halftime deficit to four. Later, the Patriots finished the third quarter on a 12-2 burst to take a 47-37 lead into the final frame.

A trey from Colin with 2:41 left cut CHC’s deficit to 10, but the Patriots made 6-of-7 free throws in the final two minutes to seal the win.

“My kids played hard and they fought hard until the end,” Blankenship said. “They showed a lot of character. We’re going to learn from this one and we’ll be better for it.”

CHC’s Colin and Providence’s Rivera-Morales and Butler were on the all-tourney team, along with McAuley’s Kayleigh Teeter and Sheldon’s Mahalia Swink.

With the event’s championship trophy nearby, Daniels noted his team enjoyed competing at the tourney.

“McAuley runs a great tournament,” said Daniels, who was an assistant coach at both Arkansas and Missouri under Mike Anderson. “Everything about it was first rate. It was fantastic. I really appreciate that.”

In the third-place game, McAuley Catholic rolled past Sheldon 63-36.

Teeter poured in 27 points for the Warriors, while Swink scored 13 for the Panthers.