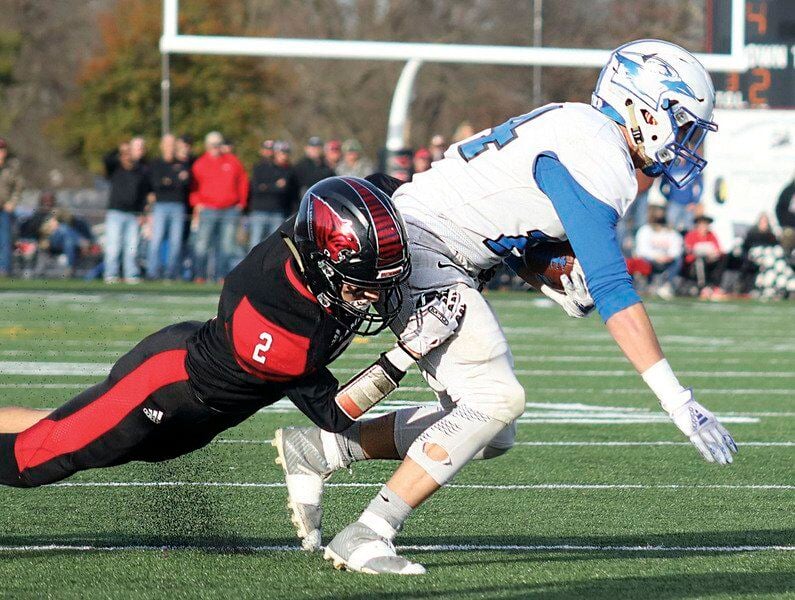 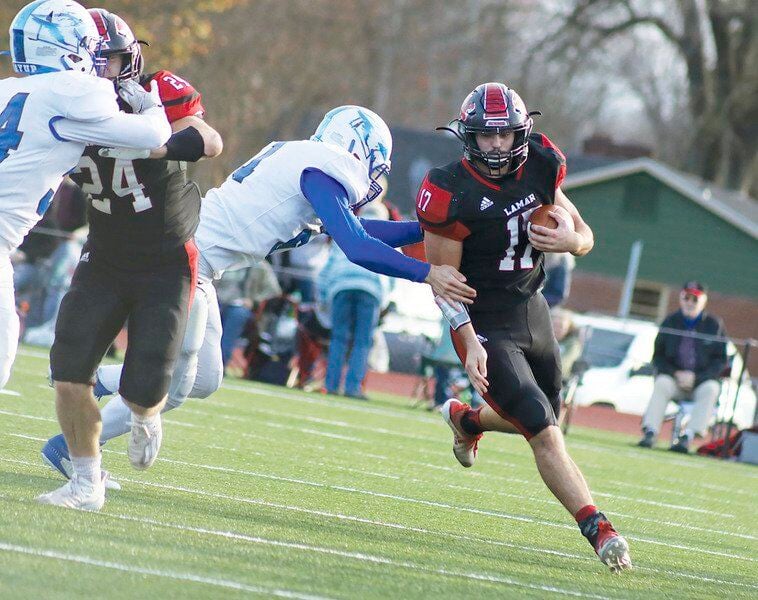 Lamar’s Trace Willhite looks to get past Jefferson’s Ethan Boyer during their Class 2 semifinal game on Saturday at Lamar. Globe | Jessica Greninger 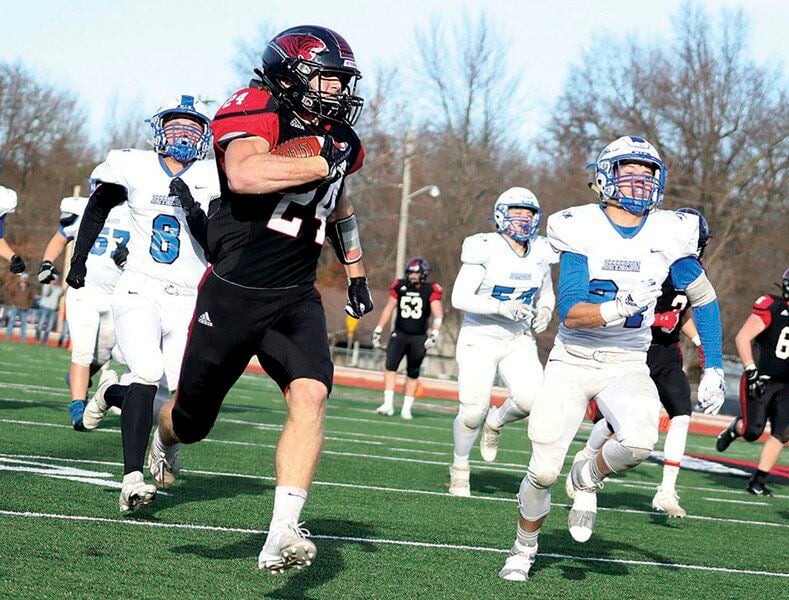 Lamar’s Logan Crockett runs the ball past Jefferson’s defense for a long gain during their Class 2 semifinal game on Saturday at Lamar. Globe | Jessica Greninger 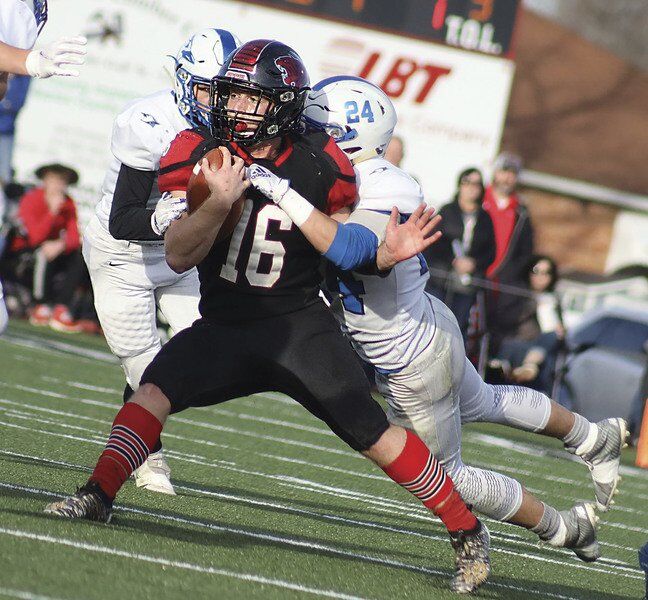 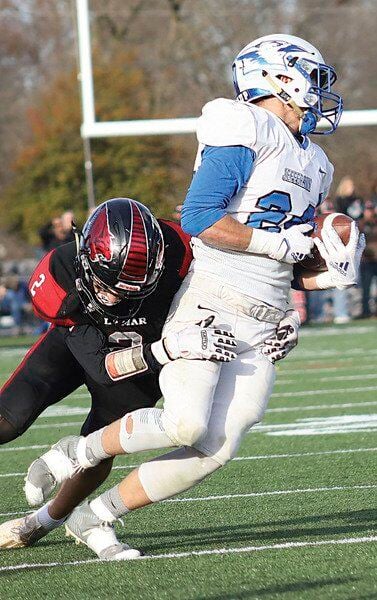 Lamar’s Trace Willhite looks to get past Jefferson’s Ethan Boyer during their Class 2 semifinal game on Saturday at Lamar. Globe | Jessica Greninger

Lamar’s Logan Crockett runs the ball past Jefferson’s defense for a long gain during their Class 2 semifinal game on Saturday at Lamar. Globe | Jessica Greninger

A quick touchdown and a takeaway on special teams led to a 14-0 advantage, and the Tigers rolled past Jefferson (Festus) 42-7 on Saturday afternoon in a Class 2 semifinal game at Thomas O'Sullivan Field.

Lamar received the opening kickoff and scored on its second play as Logan Crockett went around right end and ran 60 yards untouched to the end zone just 49 seconds into the game.

"They got nice, strong blocks out on the edge, and we capitalized on it," Crockett said. "I thought it would be a little bit closer (game), but our offense got rolling and defense got going. It all just worked out great."

Austin Wilkerson's PAT made it 7-0, and then on Jefferson's kickoff return, Jimmy Hearod forced a fumble that Cade Griffith recovered at the Blue Jays' 30. Griffith scored five players later on an 8-yard run around the right side after a double handoff for a 14-0 lead with 9:08 left in the first quarter.

"I was running down the field, and when the kid cut through dive at his legs," Hearod said. "And I guess I hit his arm too. It gave us a lot of momentum ... got the ball right back, scored, put us up 14-0."

"From there, all the momentum that we had just doubled," Griffith said. "And it obviously crushed (them). From then on, it was downhill from there for us."

"We talk about special teams always changing the game, being that third phase that people forget about," Lamar coach Jared Beshore said. "We don't forget about that phase. It's a huge emphasis in our program, and being able to capitalize on a huge play like that brings a lot of energy and a lot of momentum."

"Against a historic program like this, you can't start off giving up that touchdown pretty fast," Blue Jays coach Alex Rouggly said. "And then obviously the ensuing kickoff return and turning the ball over, you cannot make mistakes against good football teams, especially at this time of year when everybody is really good. We kind of paid for that, and it was a snowball effect after that."

That snowball got bigger and bigger as Lamar's No. 1 offense scored on all six of its series. Wilkerson's 10-yard pass from Case Tucker made it 20-0 after one quarter, touchdowns of 41 yards by Crockett and 1 yard by Tucker made it 35-0 at halftime, and Joel Beshore's 3-yard run made it 42-0 with 3:35 left in the third quarter.

The Tigers rolled up 412 yards, including 354 yards on 37 rushes as center Ryan Davis, guards Tucker Torbeck and Ben Wilhelm and tackles Blaine Shaw and Jake Polodna paved the way.

"Our offensive line is incredible," Coach Beshore said. "From where we started back in June to where we are now, those kids have gotten stronger. They've gotten more knowledgeable, and they are just as tight as brothers. They are making checks, and they are the guys who make us go. I told them that back in June that if we are going to win championships, it was going to be because of them. They have to take the lead."

"They are more physical than us, plain and simple," Rouggly said. "They beat us at the game we've had success with the last five or six weeks. That's a testament to their coaching staff and their kids and the way they do things. You just tip your cap to them and move forward."

Crockett, 195-pound sophomore who tightroped the sideline on his second touchdown run, finished with 164 yards on just six carries.

"The kid has worked his butt off," Beshore said. "He works just as hard as anybody in the weight room, and you can tell. A big day for him just being able to do what he's coached to do, and it pays off, especially the guys in front. Those are the guys opening holes for him."

Tucker totaled 77 yards on 14 carries and completed 3 of 4 passes for 58 yards, including a 33-yarder to Wilkerson who made a diving catch along the sideline.

Lamar's defense was stout, limiting the Blue Jays (9-3) to 168 yards on 39 plays. Senior running back Will Schnitzler scored on a 20-yard run with five minutes left and finished with 76 yards on 11 carries.