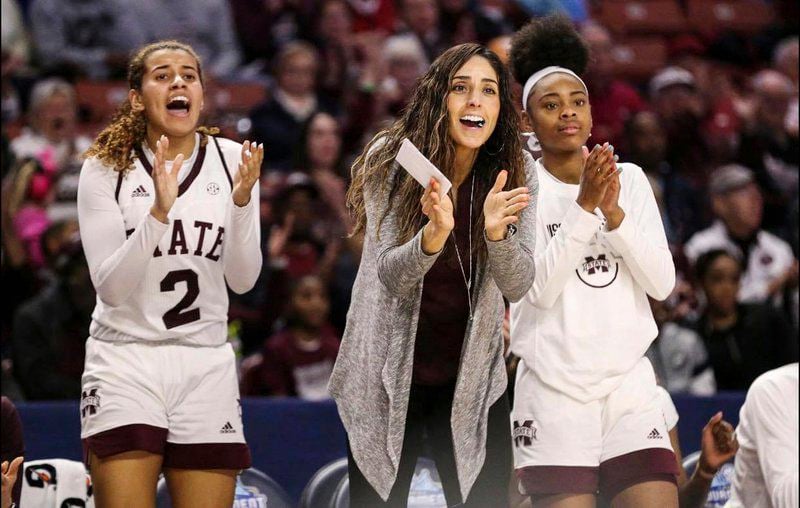 Assistant coach and recruiting coordinator Elena Lovato helped Mississippi State post a 115-24 record during two two-year stints (2014-16 and 2018-20). And in the two years in between she not on the staff, she helped recruit the teams that combined to go 71-7 and lose in the NCAA Tournament championship game both years. COURTESY | Elena Lovato 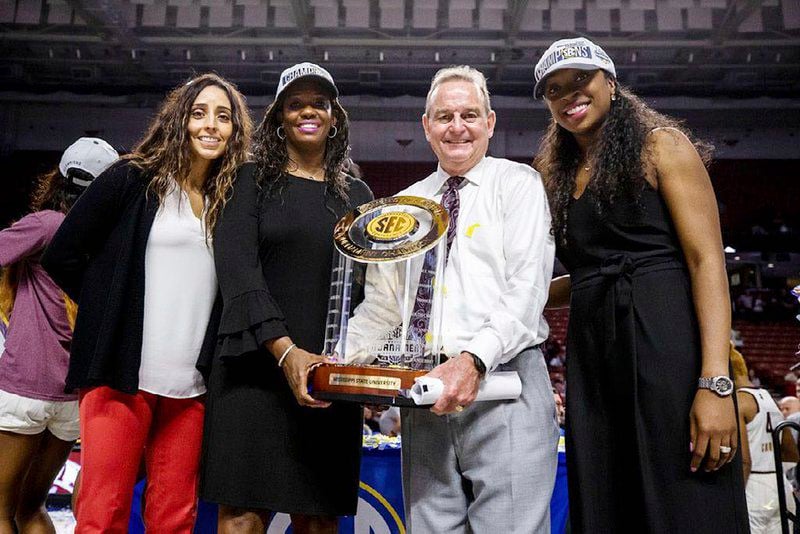 Assistant coach and recruiting coordinator Elena Lovato helped Mississippi State post a 115-24 record during two two-year stints (2014-16 and 2018-20). And in the two years in between she not on the staff, she helped recruit the teams that combined to go 71-7 and lose in the NCAA Tournament championship game both years. COURTESY | Elena Lovato

During her college coaching career, Elena Lovato has never spent more than two years at one stop.

It appeared that Lovato was preparing for her third year as an assistant and recruiting coordinator at Mississippi State starting this fall, but lo and behold, last month Bulldogs head coach Vic Schaefer left to become head coach at the University of Texas. And he took his entire staff with him.

“I was at home (Albuquerque, N.M.) after the pandemic happened,” Lovato said. “I’d been home three weeks, had some down time. My brother lives next door to my dad, so I had three nieces there every day. I’m just living the auntie-life. It was awesome.

“(Coach Schaefer) called me that Friday and said Texas had reached out to him. He reached out to me and the rest of the staff ... ‘What do you think? Could you see yourself moving to Texas?’

Schaefer directed the Bulldogs to a 221-62 record in eight seasons, highlighted by two NCAA Tournament championship game appearances when they lost to South Carolina in 2017 and Notre Dame in 2018.

But Schaefer’s 35-year coaching career includes 21 years in Texas, and he quickly said yes to the Longhorns and left a talented team back in Starkville.

“He built a powerhouse in his eight years and I think preseason No. 3 looking into next year,” Lovato said. “We had some great players. They were all very young. I think we would have made a great run for a national championship.

“But the resources and the amazing university that Texas is, it’s a powerhouse. And the city, three years straight it’s been voted the best city to live in. Everything ... it’s just an easier sell. When Schaefer went down there to visit, he felt like he could win multiple championships down there. It’s definitely a great opportunity to restore a powerhouse.”

Lovato, who played basketball at Missouri Southern from 1999-2001, also has strong ties and fond memories associated with the state of Texas.

She was an assistant and interim head coach for one year at Trinity Valley Community College, going 9-2 in the final 11 games and a sixth-place finish in the national tournament. She left to become head coach at Grayson College, and in one season the record flipped from 4-26 to 32-4 and a fifth-place national finish. But Grayson dropped women’s basketball as part of budget cuts.

After a year at Nebraska-Omaha, she returned to Trinity Valley and the Cardinals went 72-2 and won back-to-back national championships. Then she was hired by Schaefer at Mississippi State.

Near the end of her second year at Mississippi State, Lovato brought her parents to the SEC Tournament in Jacksonville, Florida. During that time Lovato was hit with a dose of reality.

“I think life just slapped me in the face,” she said. “I had flown my mom and dad to the SEC Tournament. They were getting older, and my career was my No. 1 priority at the time. I saw my mom taking like 10 pills one morning, and I was like, ‘Mom, what is all that?’ She had developed cirrhosis of the liver and she had diabetes. My dad at the time had been diagnosed with prostate cancer. At that point, I broke down and I was like ‘What am I doing? I’m putting my career at the forefront of my life, and I’m losing sight of what’s really truly important, my family.’

“So I had to take time out. I had tried to get the New Mexico job in Albuquerque to be near them ... have my cake and eat it, too. But that didn’t work out, so that’s when I went to Arkansas-Fort Smith. Just dropping down a level, I felt like I’d have some balance. I’d have summers to be able to spend some time with my family. I took those two years to have balance.”

Arkansas-Fort Smith went 37-24 in two years under Lovato, and the 2017-18 team won 20 games and made the NCAA Tournament. Then Mississippi State came calling again.

“Carly Thibault-DuDonis had taken over my role, then she left to go to Minnesota,” Lovato said. “When that position opened back up, Coach Schaefer talked to the other two assistants and asked them who they would want to work with, and they brought my name up. I was keeping in touch with them. I felt just as involved with their success when they played for those two national championships because I had such close ties with everybody. We didn’t leave on bad terms. It was a life-balance thing for me.

“That opportunity doesn’t present itself one time to some people. For me it was going to be a second opportunity to come back and be part of an amazing staff with great people who I felt were my second family. So I jumped back on board.

“It’s definitely a blessing because I lost my mom in August, and I don’t know if I could have navigated through all that. I’m still dealing with it honestly. They’ve been a great support for me.”

“It does not feel like 20 years,” she said. “I don’t feel like it’s been that long. I don’t feel like I’m about to be 41. When you’re surrounded with 18- to 22-year-olds, I think they keep you young. Obviously it’s not work when you’re living out your passion.”

A 5-foot-9 guard, Lovato averaged 9.6 points and 5.2 rebounds and was named MIAA newcomer of the year in 1999-2000. She averaged 7.8 points and 3.7 boards as a senior to complete two injury-plagued seasons under coach Amy Townsend.

“I had knee surgeries, and a broken finger kept me out part of my senior year,” Lovato said. “I think we would have been really special my senior year. We just had some stuff not go our way. I really thought if we had a good year, Coach Townsend would have been able to stay a little bit longer. We were going to turn things around for the betterment of the program and her career, but unfortunately it didn’t work out that way.

“But she’s an amazing mentor. I still talk to her often. She came to some of our games when we played close to Kansas or Oklahoma. She came to my Division II games. She’s amazing.”

After college, Lovato played professionally two years in Puerto Rico, averaging 23 points and 10 rebounds the first season and 18 and 8 the next year. She played for the Chicago Blaze of the National Women’s Basketball League in 2002, but more knee problems ended her playing career.

When I hurt my knee, I went home and worked for a pharmaceutical sales company,” Lovato said. “I worked for three years and climbed the ladder, but I told my mom and dad I wasn’t happy. I was home with them in Albuquerque but I felt like I was missing something. It was basketball, being part of a team, being part of something bigger than yourself.”

“I had gotten in touch with Cathy Shoup (former assistant under Townsend at MSSU),” she said. “She was the coach at Buffalo (Mo.) High School and athletics director, and she was looking for an assistant.

“I was head coach of the junior varsity team and teaching middle school PE. I went from making probably six figures to making $28,000, and I loved it. I loved the teaching part. I have some kids who have kept in touch with me, and it’s hilarious because they are having babies now.

“I enjoyed it, but the basketball was not as competitive as I needed it to be.”

So Lovato reached out to Pittsburg State assistant Amanda Davied, who had recruited Caitlin Demarest (also from Albuquerque). She was hired to be a graduate assistant under Steve High, but High was relieved of his duties and incoming coach Lane Lord had a grad assistant in mind. So Lovato still went to PSU as a volunteer assistant, and she made such an impression on Lord that he helped her get an assistant’s job the next year at the University of Houston.

“And my journey began,” Lovato said. “It’s all God’s plan. He has plans that are bigger than we can even imagine. I’m just trying to be obedient, and right now it’s been a true blessing to be on this staff with these people.”

Lovato plans to move to Austin in early June, and she’s already made one adjustment to her new job.

“My first shot at ‘Hook ‘em Horns,’ I had my horns backward,” she said. “They said the purists would not like that. I make sure my palms are facing outward, so I’m learning.”

WEBB CITY, MO - William Vick Koelling, 93, passed away on Sunday, May 24, 2020. Graveside services will be at 2 p.m. Thursday at the Howell Valley Cemetery, in West Plains, MO.