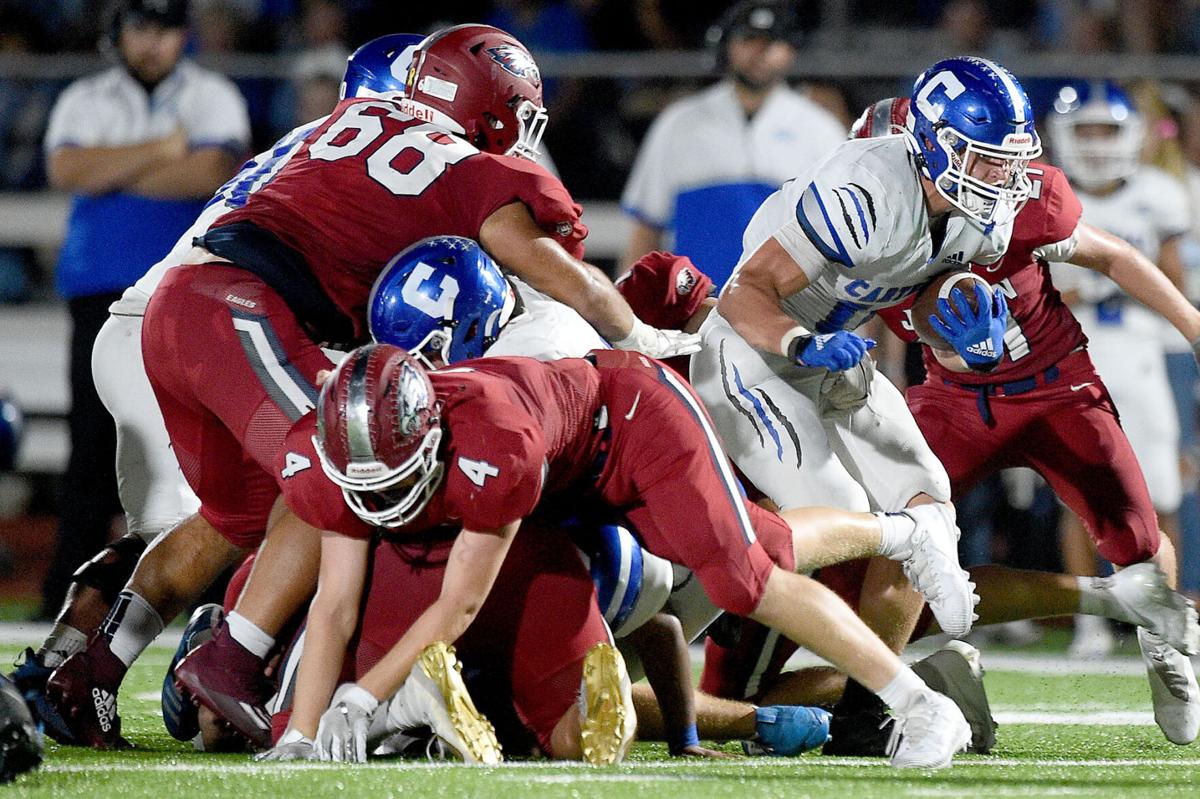 Carthage’s Luke Gall (right) emerges from the pile for a first down during the Tigers game against Joplin on Friday night at Junge Stadium. Globe | Laurie Sisk 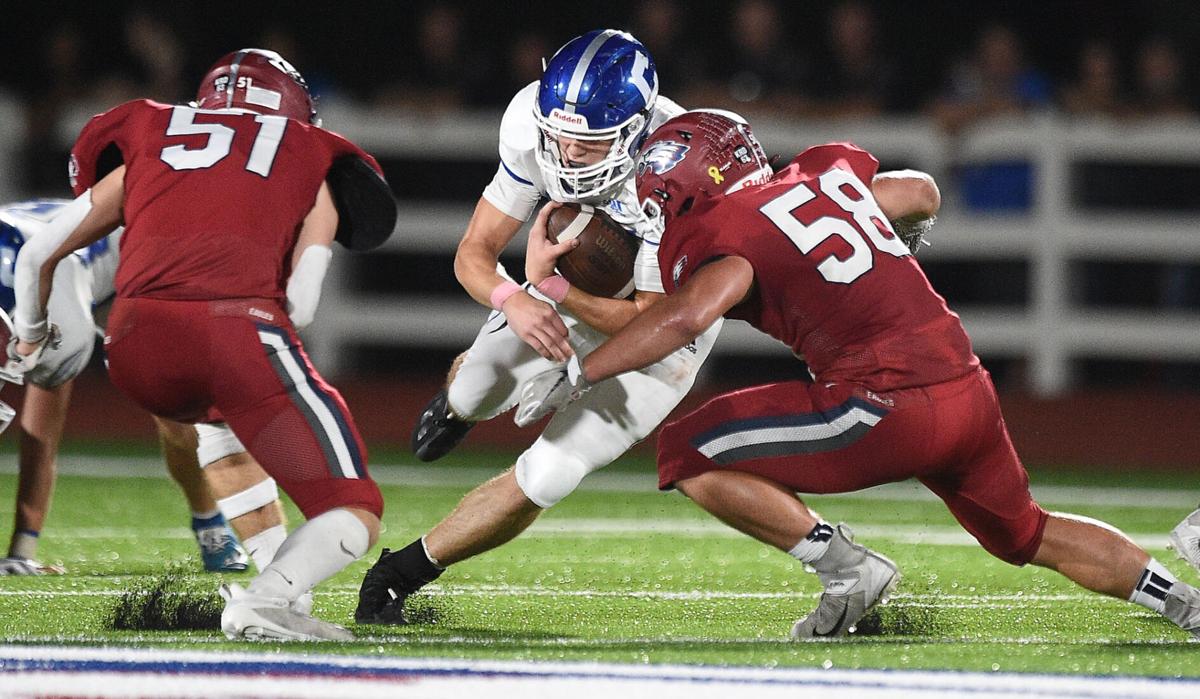 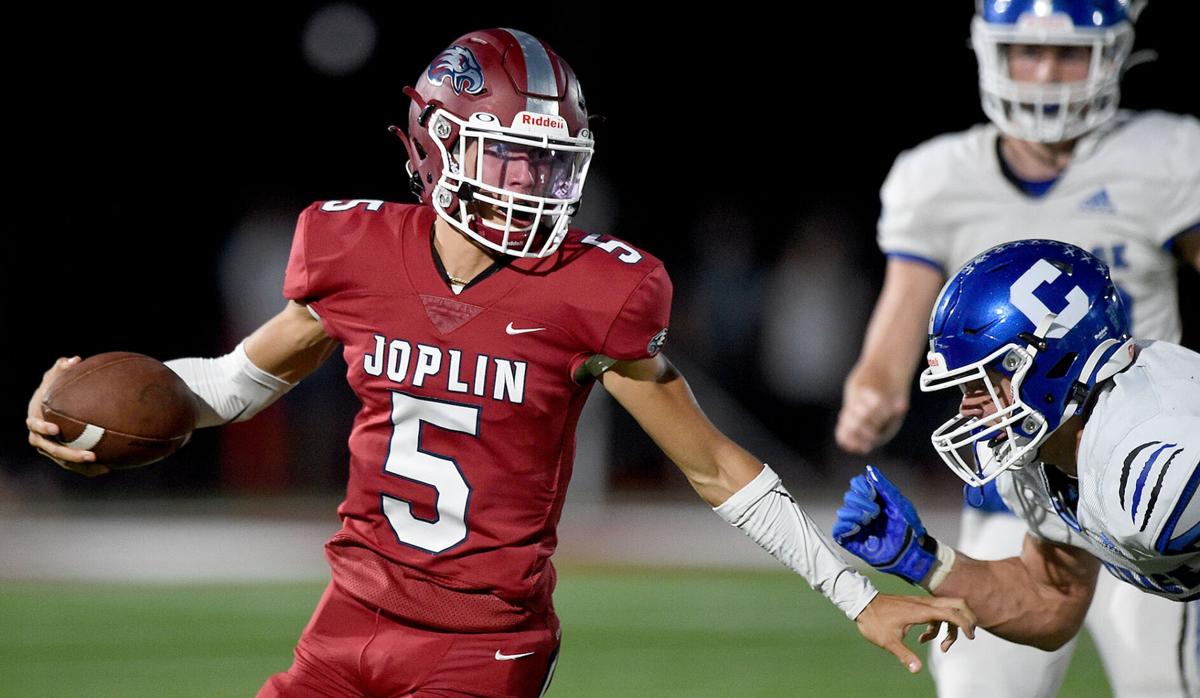 Joplin's Always Wright (5) scrambles out of the pocket as Carthage's Luke Gall gives chase during their game on Friday night at Junge Stadium. 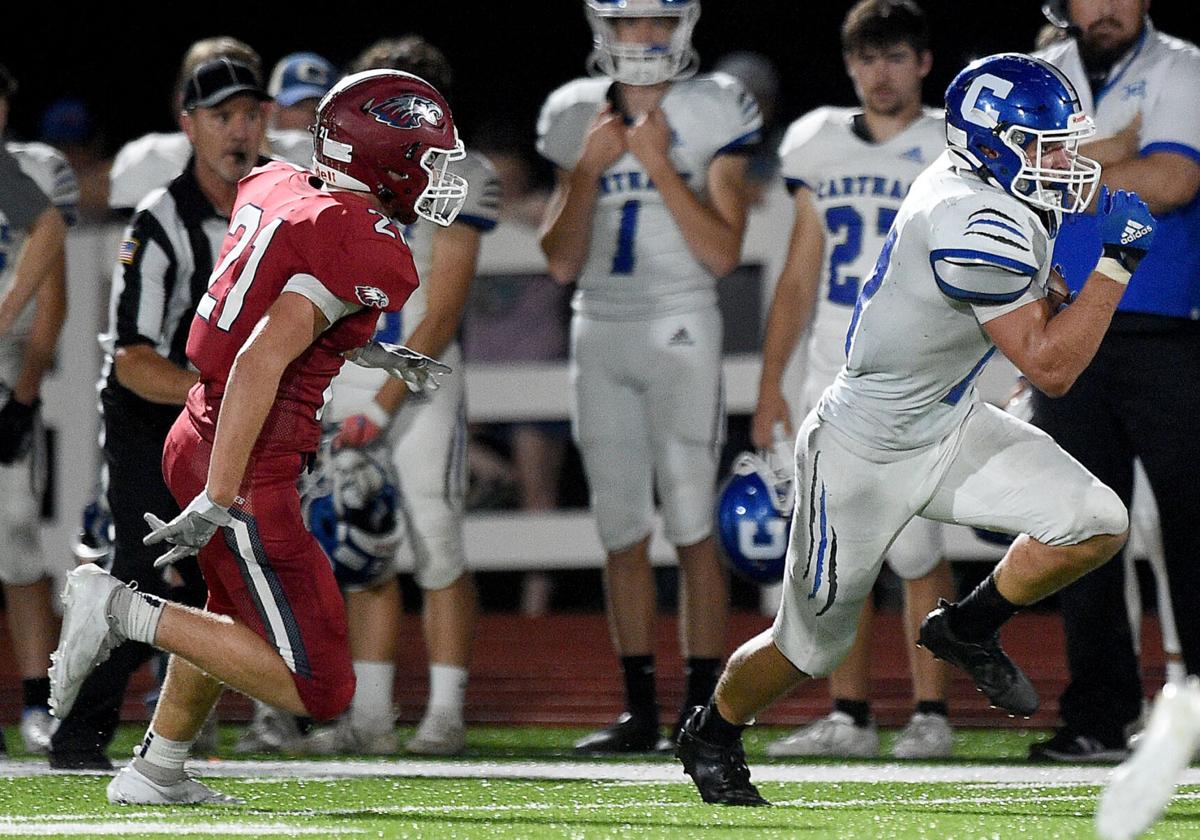 Carthage's Luke Gall (14) races down the sideline for a long touchdown reception as Joplin's Jonathan Williams (21) gives chase during their game on Friday night at Junge Stadium. 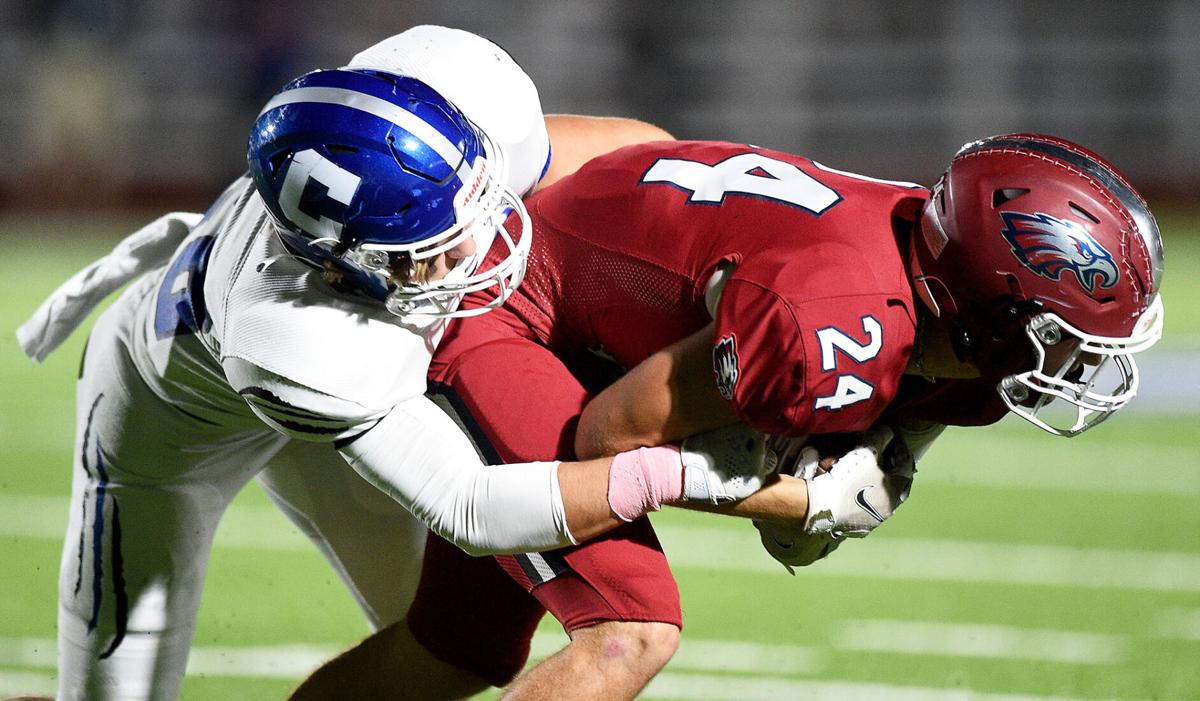 Carthage’s Luke Gall (right) emerges from the pile for a first down during the Tigers game against Joplin on Friday night at Junge Stadium. Globe | Laurie Sisk

Joplin's Always Wright (5) scrambles out of the pocket as Carthage's Luke Gall gives chase during their game on Friday night at Junge Stadium.

Carthage's Luke Gall (14) races down the sideline for a long touchdown reception as Joplin's Jonathan Williams (21) gives chase during their game on Friday night at Junge Stadium.

All in a day’s work for Carthage junior Luke Gall.

Gall, a 5-foot-11, 200-pound running back and linebacker, was impacting the game in all phases as he helped lift the Class 5 No. 2 Tigers to a 34-22 victory over Class 6 No. 3 Joplin in a matchup of undefeated teams on Friday night at Junge Field.

The Carthage standout is making a strong case at being Central Ozark Conference Player of the Year. His performance vaulted Carthage’s record to 7-0 as it now stands alone atop the COC standings.

“I cringe so many times because he plays so many snaps for us,” Carthage coach Jon Guidie said. “Even when he’s not carrying the ball, he’s blocking for Caden (Kabance). He is taking a pounding from players nearly every single play. But he wouldn’t have it any other way. If you take him out, he is going to be mad. That’s what kind of kid he is.

“What a special kid (Gall) is. He had a great night on offense and defense.”

On the second play from scrimmage, Gall broke free and went 58 yards untouched to the house as the Tigers marched out to a 7-0 lead not even a minute into the game. After forcing Joplin to go three-and-out on its opening drive, Kabance punched in a touchdown from two yards out as Carthage extended its lead to 14-0 at the 2:49 mark.

And the story of the night was undoubtedly the Tigers’ power rushing attack. Of the team’s 469 total yards of offense, Carthage piled up 355 yards on the ground.

“Our offensive line played really well,” Guidie said. “I thought we were able to run a lot of clock off and keep (Joplin) on the sideline. I think they had one possession in the first quarter. Then just our defense. That’s a difficult offense to contain. Obviously, (Always Wright) is really special. He still had a big night, but we got to him a couple of times. That’s what we wanted to do.”

The Tigers’ pulled out the bag of tricks on their third score. Cale Patrick found paydirt on a 69-yard reverse as Carthage pushed its lead to 21-0 over Joplin at the 11:27 mark in the second quarter.

On the ensuing drive, Wright converted on a fourth-and-20 situation with a 23-yard pass to Bruce Wilbert to put the Eagles on the goal line. That set up a 3-yard touchdown run from Drew VanGilder to trim Carthage’s lead to 21-7 with 5:55 left in the first half.

But the Tigers took control of the game the rest of the way.

Kabance hit Gall for a 66-yard touchdown as Carthage took a 28-7 lead at the 4:48 mark in the second quarter. Then with 4:32 to play in the third stanza, Gall found an opening up the middle and ripped off a 39-yard run as the Tigers’ lead swelled to 34-7 over Joplin.

“He is a complete back,” Eagles coach Curtis Jasper said. “He is not just a straight-ahead guy. He can run it inside and run it outside. He can catch the ball out of the backfield. He’s just big, strong and fast.”

The Eagles (6-1) finished on a high note with 15 unanswered points in the fourth quarter — Wright connected with Terrance Gibson for an 80-yard touchdown pass and then a 7-yard touchdown strike to his younger brother All.

“Our guys kept fighting,” Jasper said. “Super proud of them. It was a little too little too late. They showed some fight and some drive. We had a chance to get it within a score there and then you never know. I’m proud of my guys for fighting.

“Carthage is a really good ball team. Offensively and defensively, they are really good. We saw some things throughout the first half and used to open it up a little more in the second half. Sometimes when you face a good team you struggle a little bit. Obviously, we’ll go back and look at film, see what things we can do better. Hats off to Carthage. They are a good football team.”

Kabance completed 9 of 14 passes for 114 yards and one touchdown while adding 67 yards on the ground in 16 carries. Gall also hauled in two passes for 70 yards.

For Joplin, Wright went 16 of 32 in passing for 267 yards, including one touchdown and an interception. Gibson amassed five catches for 129 yards while Quin Renfro had 43 rushing yards in nine carries.

The pregame message in a matchup with so much at stake?

“Nothing,” Guidie said. “I’m not kidding. We didn’t even talk about anything being at stake. We didn’t want to hype it up too much, didn’t want to build it up too much. I’m sure they heard it all over the place … Social media, school and in the community. (Our kids) are so good and so experienced. They understand things and understand the big picture. I think that’s the biggest thing. It’s a really mature and experienced group. I’m just so proud of them.”