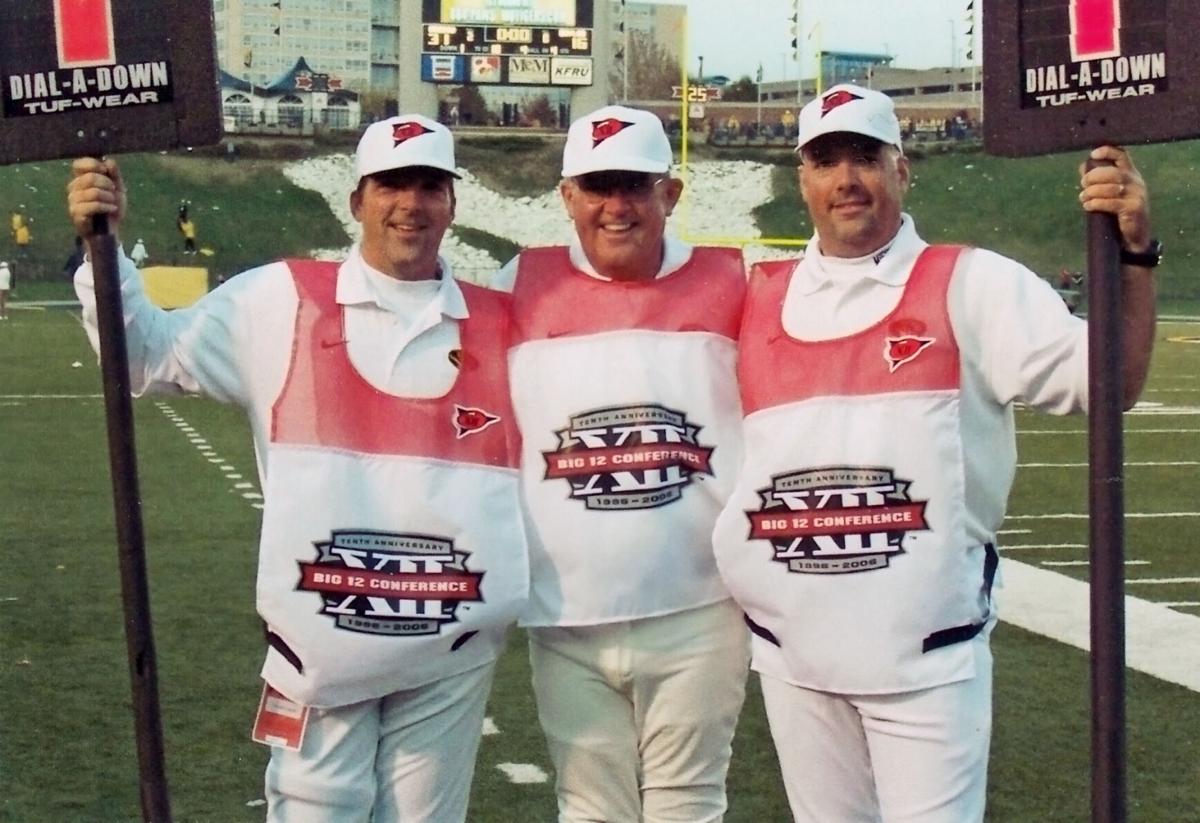 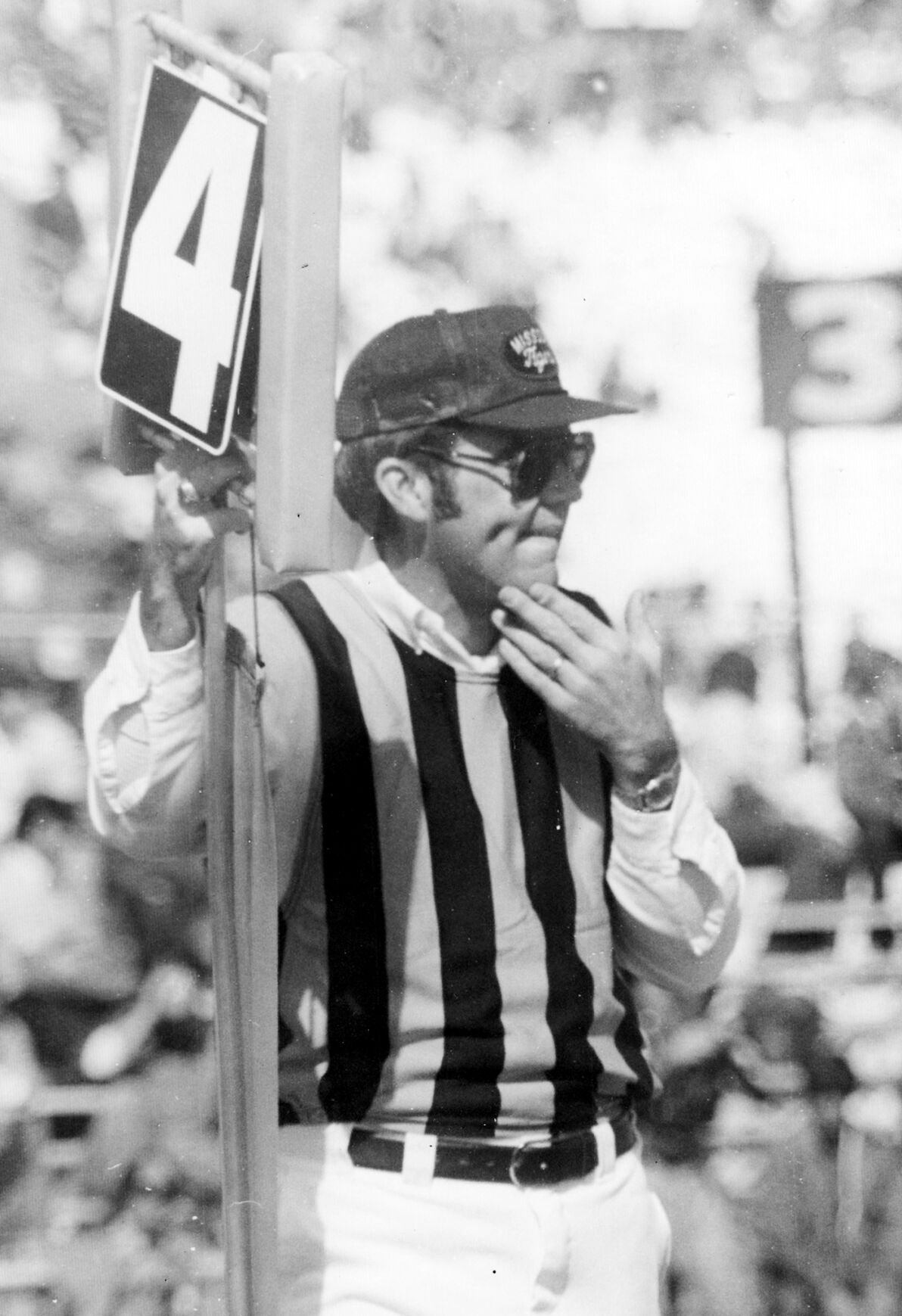 Rich Montgomery missed only two games while working 50 years on the Missouri chain crew from 1968-2018.

Rich Montgomery missed only two games while working 50 years on the Missouri chain crew from 1968-2018.

The pay is lousy, but the view is fantastic.

And Jeff Montgomery isn’t about to give it up.

Montgomery, a Webb City resident, has been the head of the University of Missouri football chain crew for the last five seasons, taking over for his father Rich. Jeff’s younger brother Mark is also on the crew.

This particular chain crew dates back to 1957, and it will be inducted into the Missouri Sports Hall of Fame on Jan. 31 at the Ozark Empire Fairgrounds. Tickets are $150 and can be purchased by calling the hall of fame, (417) 889-3100.

Claude Menefee was a student at Missouri in 1957 when he responded to a call for someone to help at the Tigers’ football game that week. He went to coach Sparky Stalcup’s office, found out he needed someone to run the chains and agreed to find two friends and do the job.

Menefee, who is 81 and lives in Fulton, continued to work the chains after college, and that led to the Montgomery family coming on board.

“I taught school in the Parkway School District in St. Louis,” Rich said. “My mother worked at the university, so she had season tickets for ages. It was really cheap for employees, so I was going back to the games.

“The first year I taught school, I taught in the same school district as Claude Menefee did. I went to the game and looked down on the sideline and just happened to recognize (him). At halftime I went down — back then you could walk out on the field with no problem — and started talking to him and said ‘how in the world did you get this job?’ He said, ‘Rich I’ve been doing this ever since college days.’

“I said, ‘Boy, I’d sure like to do it,’ and he said, ‘Well, why don’t you come next Saturday?’ So the next Saturday, I met him out on the intersection at I-70, rode down (to Columbia) with him and that was the start of it. Fifty years later, I was still kicking.”

“I only missed two games in that length of time,” Rich said. “My lovely bride scheduled a cruise on our 25th wedding anniversary, and we missed two games. I watched both of them while we were overseas on a late-night video feed from the university.”

Jeff joined the crew for the first time in 1990 but then left when first he became a graduate assistant coach for the Tigers and later his family moved to Phoenix. When he moved to Webb City in 2000, he rejoined the crew.

His brother Mark worked with the crew on and off since the early 1990s. He lives in Columbia.

In 2016 Jeff moved over to replace his father on the down box, mainly because of the quick-tempo offenses the Tigers and other teams used.

“That was a little difficult.” Jeff said. “It’s something I knew would happen one day, but I always figured as long as dad’s heart was beating, I don’t want that yet.

“What an opportunity we have,” Jeff said. “Missouri has never paid us. They give us meals, so we’re paid in food.

With Missouri having five or six home games each season, it’s estimated that Rich worked almost 300 games during his 50 years. That includes five or six Big 12 championship games in Arrowhead Stadium as well as the Missouri-Kansas game when it was moved to Arrowhead.

Out of all those games, one sticks out.

“I know,” Rich said. “I can remember so much about of that game, and you just think how in the world did that happen.”

The Tigers scored late to take a 31-27 lead, and Colorado started from its 12-yard line and reached the Missouri 3 with about 30 seconds to go.

And then, it happened.

Colorado quarterback Charles Johnson spiked the ball to stop the clock on first down, and Eric Bieniemy – yes, that Eric Bieniemy, the Chiefs’ offensive coordinator – gained two yards on second down. The Buffs called their final timeout, and that’s where the problems began.

Referee J.C. Louderback went to the Colorado sideline and told coach Bill McCartney that was the final timeout. Moments later there was commotion in the stands behind the Colorado bench where a fan had a heart attack, and an ambulance came onto the track.

“The referee just flat forgot to tell us,” Rich said. “Ordinarily we would say ‘Hey Joe, it’s third down’ or ‘Hey Joe, it’s second down.’ That day though, it did not happen.”

When play resumed from the 1, Bieniemy went airborne but was stopped short of the goal line. As the clock went below 10 seconds, officials stopped the clock, apparently thinking the players were taking too long to Get up from the tackle. Officials restarted the clock, and Johnson again spiked the ball to stop the clock with 3 seconds left.

That was fourth down, but the down box and scoreboard showed third down. So Colorado got another play, and Johnson scored on a keeper off right tackle for a 33-31 victory.

Johnson fell on his back – photographs show he was short of the goal line – and extended the ball over his head and over the goal line. The official delayed his call, ran toward the pile with Missouri students right behind him and signaled touchdown.

“Even (with the fifth down), he didn’t score,” Rich said. “That’s what really kind of gripes you. We saw that he was short of the goal line. He was on his back and stuck the ball over his head. And when the referee got them untangled, what he saw was the ball in the end zone.”

Jeff was 88 yards away, holding the marker indicating where the drive started.

“I had no clue,” he said. “To this day, we wonder how did that happen. If we didn’t have the video footage to watch it … I don’t think anybody knew it. They stopped the clock because players were getting up too slow. That was a question mark, too. It wasn’t all about the chains.”

Today, 30 years later, “It’s just part of our family,” Jeff said. “It’s a crazy deal but one we live with and laugh about now.”

1st and goal from the 3: Johnson pass incomplete

2nd and goal from the 3: Bieniemy runs middle, 2 yd gain

3rd and goal from the 3: Bieniemy runs middle, no gain

4th and goal from the 3: Johnson pass incomplete

Johnson runs for PAT, no good

There are some familiar names involved with the Colorado-Missouri football game in 1990.

Of course, Eric Bieniemy, the Colorado back who was stopped short of the goal line on two plays, is now offensive coordinator for the Chiefs.

Stacy Elliott, who was in on the tackle on the fifth-down play, is the father of Dallas Cowboys running back Ezekiel Elliott.