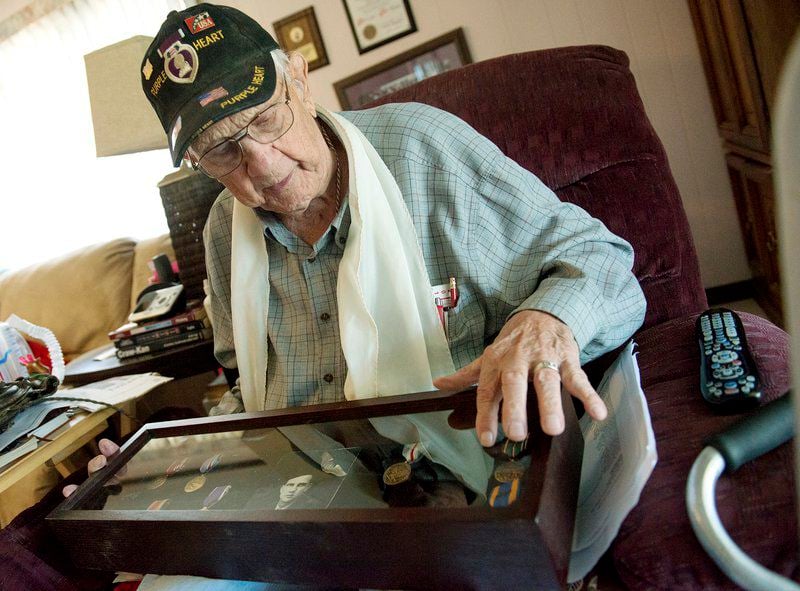 World War II veteran Homer Cole points out the medals he received for his service in World War II. He was a tail gunner on a B-17 Flying Fortress. Cole died on Friday at age 94.GLOBE | ROGER NOMER 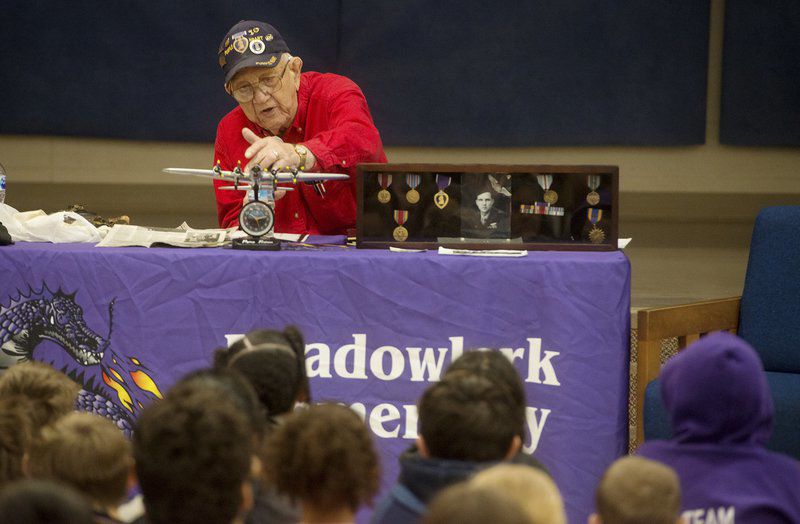 Homer Cole shares his experiences in World War II with students at Meadowlark Elementary in Pittsburg in 2019.Globe | Roger Nomer

World War II veteran Homer Cole points out the medals he received for his service in World War II. He was a tail gunner on a B-17 Flying Fortress. Cole died on Friday at age 94.GLOBE | ROGER NOMER

Homer Cole shares his experiences in World War II with students at Meadowlark Elementary in Pittsburg in 2019.Globe | Roger Nomer

What kind of person was Homer Cole?

“Homer called me the day before he went in the hospital,” his good friend Gene Bicknell said. “He said ‘I just wanted to tell you how much I miss you.’ ”

Cole, a Pittsburg icon and avid supporter of Pittsburg State University, died at 7:03 a.m. Friday after a bout with pneumonia. He was 94.

Everybody in Pittsburg knew Homer, and Homer never knew a stranger. If there was a stranger, he wasn’t a stranger for long.

“This man’s name is Bob,” Homer told me during one of our breakfasts at Otto’s Cafe as he pointed to a nearby table. “He’s from Maryville. He’s on his way to Tulsa to pick up something.”

Homer organized those breakfasts, which included family, friends and coaches and administrators from Pittsburg State. Attendance was almost mandatory.

“The breakfasts we had with him ... I remember a card he would pull out that has everybody he invited,” PSU men’s basketball coach Kim Anderson said. If you didn’t show up very often, he’d be calling you on the phone. And you couldn’t be late either. About two minutes late and he was calling you, ‘Hey, where are you at?’

“I learned a lot during those breakfasts. You just sit there and listen and you’d learn a lot about him. He knew everything about Pittsburg. When he and Gene Bicknell were there, that was entertaining but also educational.”

Not all of the calls involved breakfast.

“He’d call and wouldn’t talk very long, less than a minute,” Anderson said. “ ‘Just wanted to let you know I’m thinking about you. How are you doing?’

And most of those calls ended the same way: “You have a great day and a better tomorrow.”

Cole was raised in Carthage before moving to Pittsburg. A few weeks after graduating from Pittsburg High School in 1943, the 18-year-old was drafted and sent to England for World War II.

“I always knew where we’d been, not where we were going,” Cole said.

After the war, Cole returned to Pittsburg and attended Kansas State Teachers College from 1945-50. He was allowed to play basketball five seasons because of the war, and he still ranks fifth in school history in games played (110, a record he held for almost 50 years) and personal fouls (296).

After college he taught school and coached football, basketball and baseball. He moved to Joplin and was Parks and Recreation Department director from 1954-60. He later ran bowling alleys in Joplin and Pittsburg.

A story from Holiday Lanes in Pittsburg, Cole returned after being gone for a few days, and when he went to the back of the alleys to work on a machine, he saw something he didn’t like.

“I looked down the alley and saw the lane had been blocked (altering the oil pattern to produce more shots in the pocket),” he said. “I called ABC (American Bowling Congress) and told them I knew of a bowling alley that has its lanes blocked. Mine.”

Another bowling story that he loved to tell: Homer and his wife Evelyn had competitions where the person who bowled the lowest score had to do the dishes the next week. One time Homer had a big game early in the week and while he was bragging to Evelyn, she said just wait until Saturday.

“She beat my score Saturday,” Homer said. “Monday I went and bought a dishwasher.”

Cole also spent some time in politics as a member of the Pittsburg City Commission from 1987-91 and mayor in 1988 and 1989. He was instrumental in getting the senior citizens center built that bears his name.

“There have been a lot of people who were critical of Homer when he was on the city commission, but he didn’t hold that against anyone,” Bicknell said. “He just kept on doing what he thought was right. And he’s like all the rest of us ... sometimes you’re right, sometimes you’re not. But as long as in your heart you know you’re right and you use the Lord to help guide yourself, you do the best you can.”

Homer’s biggest love outside his family was Pittsburg State and PSU athletics.

“He’d come to practice and Amanda (Davied, PSU women’s basketball coach) and I were practicing at the same time,” Anderson said. “Amanda was one on the middle court and we were on an end court. He’d sit right there in between, watch both teams practice.

“He was a true Gorilla fan, the greatest fan you could ask for, all sports. He supported everybody. Win or lose, he was always positive and always had a little advice. When you look back at everything he has done, it’s amazing.”

“He was the eternal loyal supporter of Pitt State and individuals,” said Joplin basketball coach Jeff Hafer, a former assistant at PSU. “Homer supported you through everything. I’ve not been in Pittsburg and away from Pitt State (for more than 10 years) ... every year I’d talk to Homer at least a couple of times, and most of the time Homer was calling me, just wanting to give me encouragement.

“All the things he saw throughout his lifetime, it was fun to visit with him about that. You always felt supported. Homer didn’t let you have a bad day. He’s such a phenomenal man. We’re all lucky to know him.”

“Homer Cole ... how do you describe Homer Cole,” Bicknell summarized. “A great patriot. He loved his sports. He loved his family. He was a solid citizen and he loved his city. He would do anything he could for anyone, and he worried about everybody. I look at him as a spiritual, wholesome individual.

“Homer was one of a kind. Bless his heart, he lived his life to the fullest.”

JIM HENRY is sports editor at the Globe and receives correspondence at jhenry@joplinglobe.com. Follow him on Twitter at @Jim_Henry53.