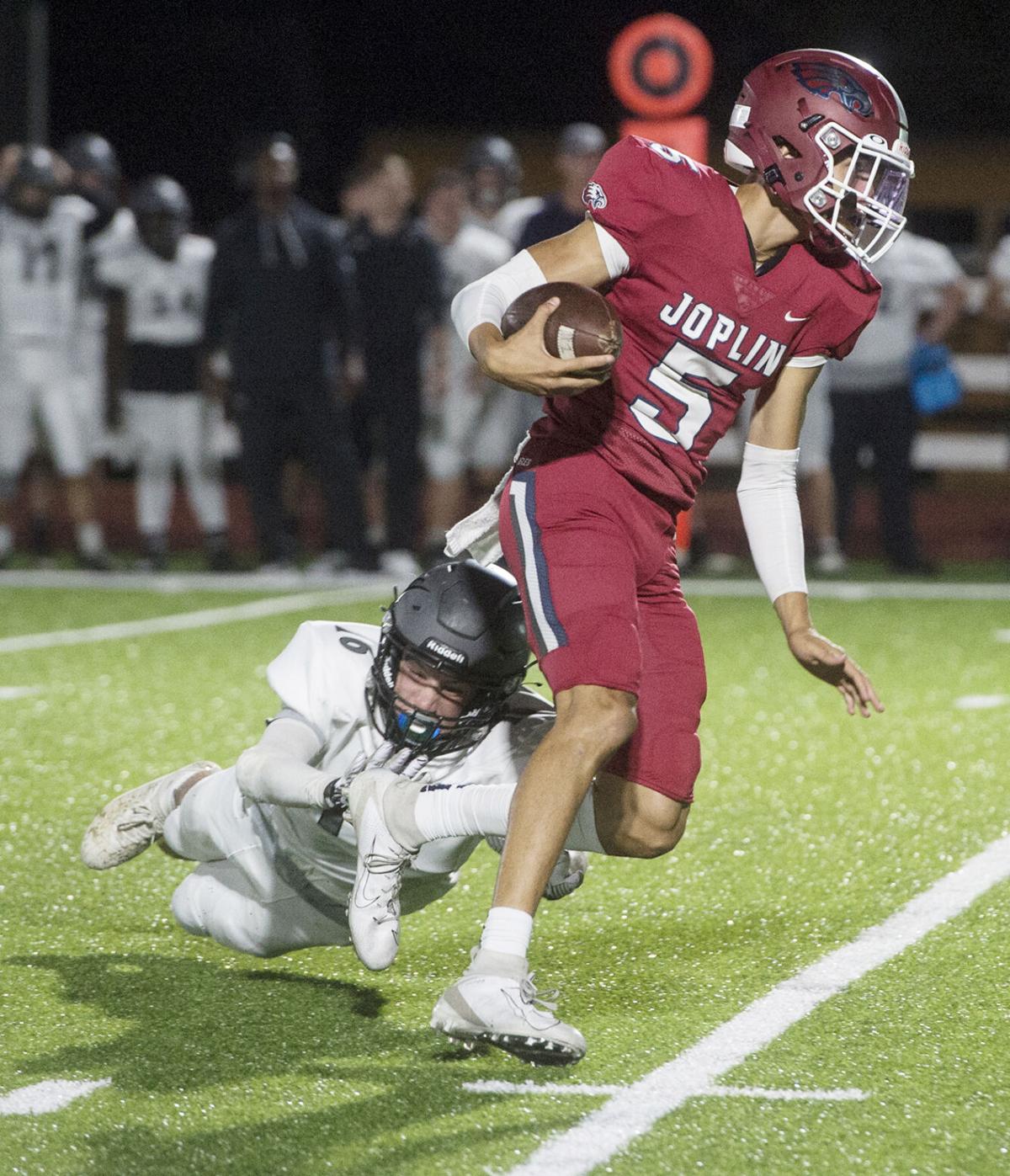 Joplin’s Always Wright gets away from Willard’s Gabe Cruse on a touchdown run during a game on Sept. 24 Junge Field. Globe | Roger Nomer 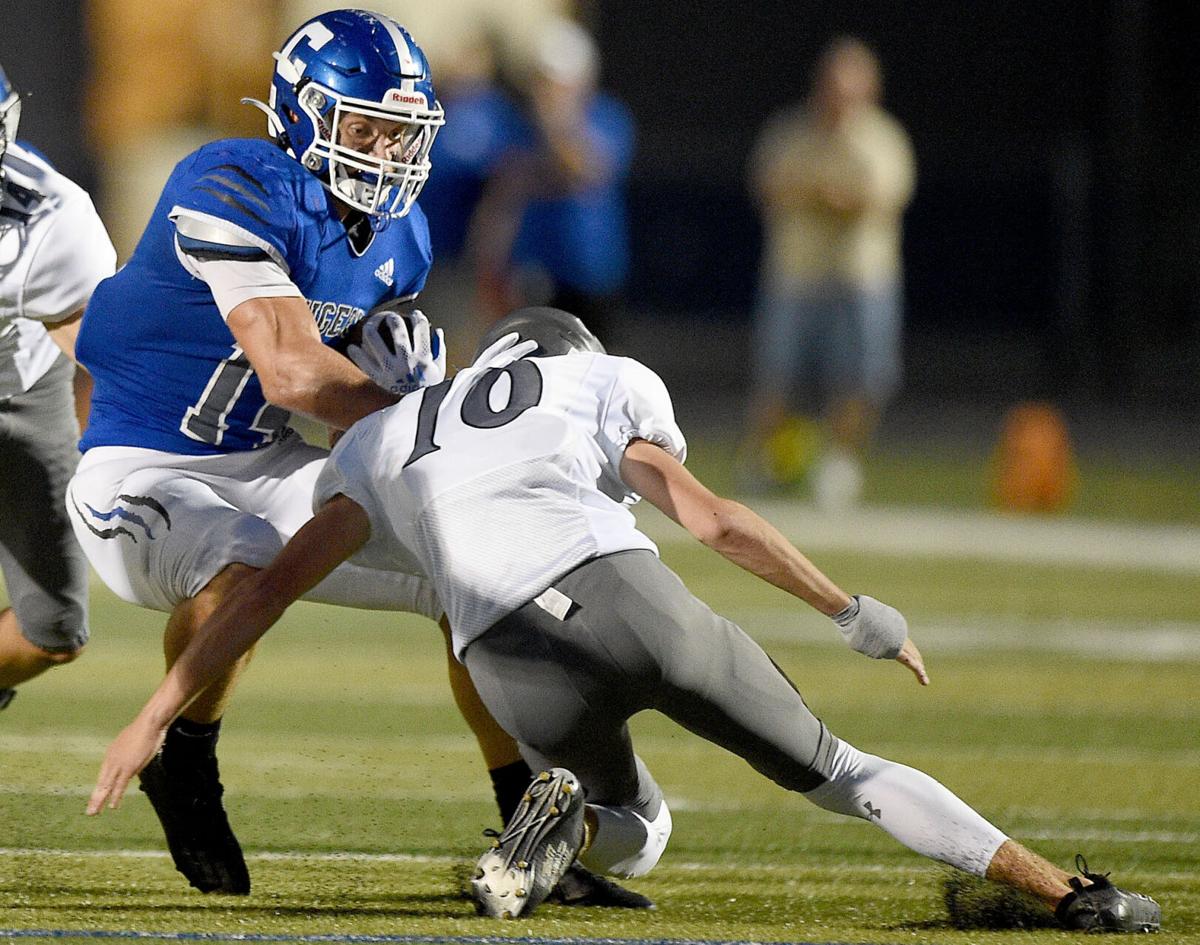 Carthage’s Luke Gall (14) tries to get past Willard’s Blaine Willard during their game last Friday night at CHS.Globe | Laurie Sisk

Joplin’s Always Wright gets away from Willard’s Gabe Cruse on a touchdown run during a game on Sept. 24 Junge Field. Globe | Roger Nomer

Carthage’s Luke Gall (14) tries to get past Willard’s Blaine Willard during their game last Friday night at CHS.Globe | Laurie Sisk

It’s a rivalry that’s just beginning to blossom since Joplin joined the Central Ozark Conference in 2018, and there is much at stake when Carthage (6-0) travels to clash with the Eagles (6-0) at 7 p.m. on Friday at Junge Field.

It’s a showdown between two unbeaten teams as well as two of the top football powerhouses in Missouri this season.

Last but not least, the matchup will determine the frontrunner in the COC standings.

“After three years, we’ve had some pretty good ball games,” Carthage coach Jon Guidie said. “Certainly, 2019 was a really good game — for the fans at least. We’ve had some good games, and there is a good rivalry developing here between two towns that are pretty close together.”

“It’s an area game. All of the area games seem to be a bit bigger,” Joplin coach Curtis Jasper said. “All of our kids know their kids. They grew up playing against each other in football, basketball and baseball. Because of that, these games typically carry a lot more with them than the rest.”

In that 2019 showdown at Junge, the outcome was a 56-55 win for Joplin in a game that saw 111 combined points and 1,182 yards of offense. Perhaps the most glaring statistic from that game — zero punts.

The game’s outcome was decided in the final seconds. Right after Carthage quarterback Patrick Carlton punched in a short touchdown run that pulled his team within a point of Joplin with 10 seconds left, the Tigers went for the win on a 2-point conversion.

But ironically on a night where Carthage’s run game was overwhelming, Joplin linebacker Holden Ledford made the play of the game when he brought down running back Tyler Mueller on a pitch at the 1-yard line to clinch the victory for the Eagles.

“It was an exciting game,” Jasper said. “Obviously, Holden’s tackle sticks out to everyone’s memory there on (Carthage’s) 2-point conversion. and that’s the thing — we were excited to get the victory.”

This year’s matchup has a lot of parallels. It’s two of the most potent offenses in the COC — perhaps the state — with Joplin averaging 42.7 points and 412.8 yards per game while Carthage averages 45.7 points and 446 yards.

Both defenses are also particularly strong. The Tigers haven’t allowed more than 14 points in a game this season while the Eagles have held their opponents to only 8.5 points per game over the last four weeks.

Leading Joplin is quarterback Always Wright who has completed 104 of 141 passes (73% completion rate) for 1,301 yards and 17 touchdowns while adding 334 yards and seven touchdowns on 34 carries.

The Eagles have four players who already have triple-digit receiving yards in Terrance Gibson (377), Landen Atherton (237), Bruce Wilbert (163) and Jack Stanley (148). Quin Renfro and Drew VanGilder have a combined 668 yards and eight touchdowns on the ground.

“You can’t help but notice their quarterback (Wright),” Guidie said. “He’s a very dynamic kid and a two-year starter, so he has some experience. He has certainly grown, matured a lot in a year. He does some really good things for them. He runs the ball well and throws the deep ball very well. I think the underneath routes he has really gotten better at, and then where he can hurt you is with his legs. He is a very slippery, fast player that can extend plays and buy some time back there.

“In the quarterback run game, he is doing a really good job.”

Braxdon Tate leads the receiving core with 14 catches for 162 yards, while Cale Patrick has four receptions for 115 yards.

“Most people talk about their quarterback and running back that are big threats,” Jasper said. “But I think their offensive and defensive line on both sides of the ball is really good.”

Carthage has claimed two of the three meetings since Joplin moved to the COC, but the home team has won all three games.

Both coaches agree this is the type of game that will likely be decided on who wins the war in the trenches.

“Not only do we have to recognize what they are giving in terms of their front, but we have to execute that and be very physical in doing so,” Guidie said.

“I think the team that wins that battle will go a long way in winning the ballgame,” Jasper said.

CARTHAGE, MO - Craig Raymond Lund, 75, a retiree of Jasper County Sheriff's Department, passed away Saturday, October 16, 2021. Private services will be at a later date. Arrangements under the direction of Ulmer Funeral Home, Carthage.