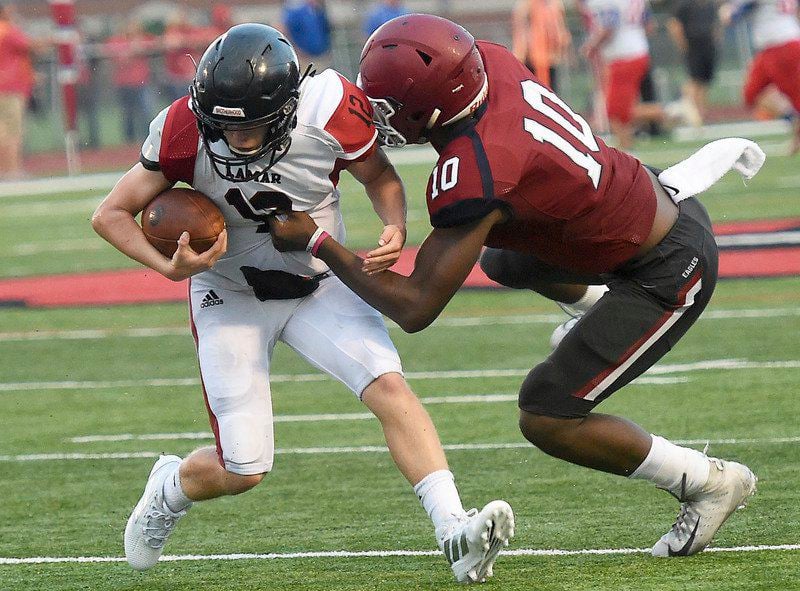 Lamar’s Cody O’Sullivan (12) tries to get past Joplin’s Kaian Roberts-Day (10) during their portion of the Webb City jamboree on this past season at Cardinal Stadium in Webb City.Globe | Laurie SIsk 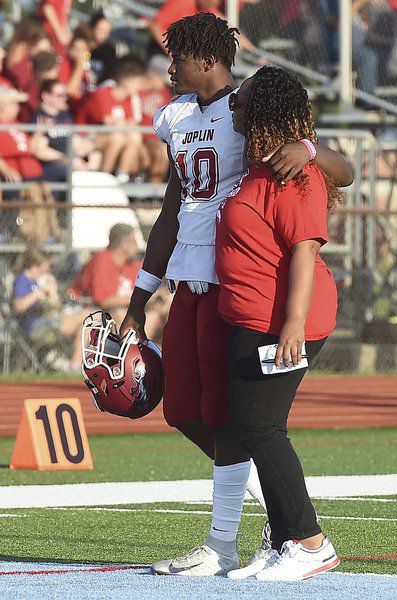 Joplin football player Kaian Roberts-Day gets a pregame hug from his mom, LaShonda Roberts before a game at Webb City High School this past season.Globe | Laurie Sisk 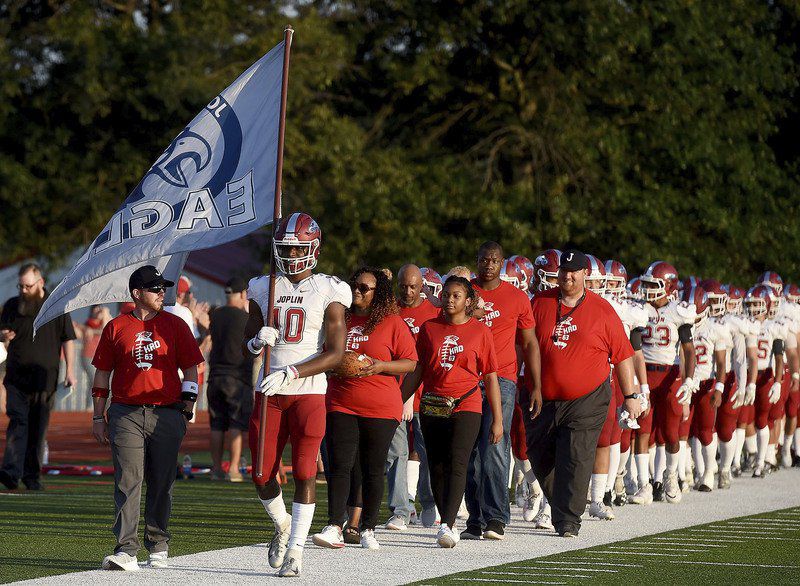 Flanked by family, coaches and teammates, Kaian Roberts-Day carries the Joplin High School school flag onto the field before the start of the Eagles' game against Webb City this past season at Webb City High School.Globe | Laurie Sisk

Lamar’s Cody O’Sullivan (12) tries to get past Joplin’s Kaian Roberts-Day (10) during their portion of the Webb City jamboree on this past season at Cardinal Stadium in Webb City.Globe | Laurie SIsk

Joplin football player Kaian Roberts-Day gets a pregame hug from his mom, LaShonda Roberts before a game at Webb City High School this past season.Globe | Laurie Sisk

Flanked by family, coaches and teammates, Kaian Roberts-Day carries the Joplin High School school flag onto the field before the start of the Eagles' game against Webb City this past season at Webb City High School.Globe | Laurie Sisk

Garnering interest from a Big 12 football program is no easy task, but that is just what Joplin’s Kaian Roberts-Day has accomplished.

Months before taking the field for his junior season, Roberts-Day has committed to play collegiate football for the Baylor Bears.

A week after attending a camp in early March, Roberts-Day heard from Baylor’s director of scouting, James Blanchard, which started the recruiting process. Blanchard and Roberts-Day had roughly six or seven conversations before an offer was made.

“The conversations started off energetic,” Roberts-Day said. “He called me and was really excited. At first, I was nervous with all of it. ... They seemed like they wanted me. ... I am excited for the opportunity.”

While earning an opportunity to play for Baylor in itself is outstanding, it's more than just football to Roberts-Day. The Bears hold a special place in his heart. Roberts-Day didn’t really have a rooting interest for a specific football team when he first started watching the game in middle school. It was his twin brother, Kadin, who really turned Kaian into a Bears fan.

“When we first started watching football back in seventh grade, we started with college football,” Roberts-Day said. “I didn’t really have a team, but my brother grew attached to Baylor. ... Over time, as he grew attached to them, I became a part of it too. ... I wanted it to be something we could share as a duo.”

“The offer for Kaian is great in so many ways,” Joplin coach Curtis Jasper said. ”It is allowing him to further his education, compete at the FBS level in a quality Big 12 program, and fulfill a dream that he and his brother shared. Playing at Baylor will allow Kaian to hold on to that personal connection with Kadin for years to come.”

Last season, Kaian and his family suffered tragedy when Kadin died after an indoor football practice leading up to Joplin’s Week 2 game against Webb City. The Eagles’ coaching staff and players, as well as Joplin and its surrounding communities, wrapped their arms around the Roberts-Day family to do as much as possible to help the grieving process for a family who lost a brother and a son.

“It felt great, honestly,” Roberts-Day said of the support he saw. “I have never seen anything like that before. Hopefully, some day I can come back and give back to this community. ... (Last season) was like a movie to be honest. It is just something you never see.”

In what turned out to be a magical season for Joplin, dedicated to Kadin, the Eagles went on to finish the regular season without a loss before going on a deep playoff run to finish as the Missouri Class 6 runner-up. It was a season Kaian will never forget, and he will carry many of the lessons learned from the 2019 senior class with him as his football career progresses.

“Blake (Tash) not only taught me but he taught the whole team something about leadership,” Roberts-Day said. “And Zay (Isaiah Davis) and Zach (Westmoreland), skill wise, taught me a lot about (developing) and about work ethic.”

As Roberts-Day, a running back and defensive end, prepares for a bigger role heading into his junior season, he says he is ready to continue to develop as a player and as a leader on the field in order to keep the momentum rolling for the Eagles.

“Baylor is getting a young man who is loyal and committed to those around him,” Jasper said. "He is a young man who has displayed the ability to grieve the loss of his twin and come away with a positive outlook for his future. I am extremely proud of Kaian. He has had to deal with adversity that no one should have to handle, especially at his age.”

One thing is certain: Nothing is more important than being at his best as Kaian continues his career on the gridiron in the honor of his late brother.

“I am ready for it,” Roberts-Day said. “This year is very important (for my development). It is my No. 1 and top priority (to be able to contribute in a bigger role). I’ll do anything it takes to get me and the team to a higher level, to perform at the highest level. I am not only doing this for me but for my brother too.”