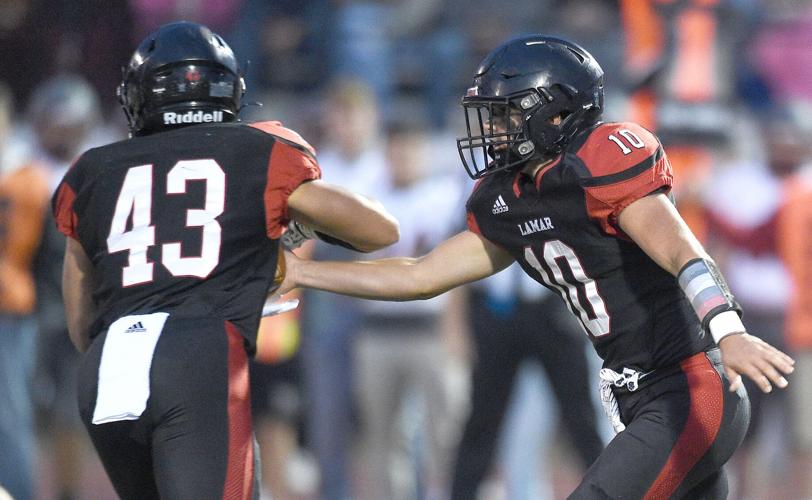 Lamar quarterback Alex Wilkerson (10) hands off to Austin Wilkerson (43) during the Tigers' game against Nevada on Oct. 8 at LHS. Globe file 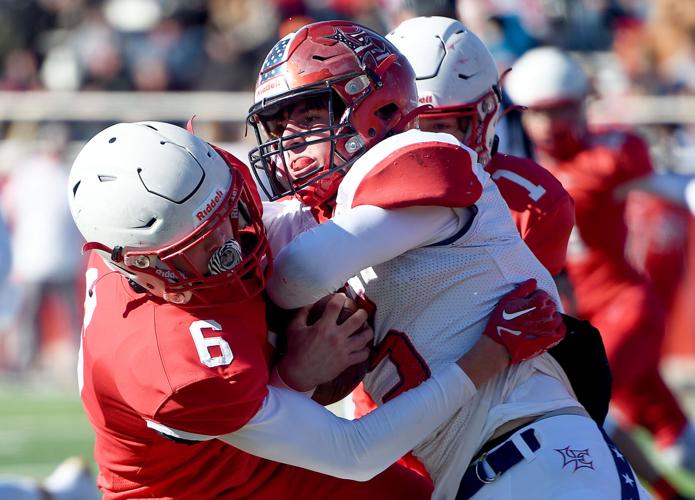 Lamar quarterback Alex Wilkerson (10) hands off to Austin Wilkerson (43) during the Tigers' game against Nevada on Oct. 8 at LHS. Globe file

Lamar and Seneca both got to experience the Turkey Day special on Thursday.

That being a little football practice thrown in with Thanksgiving Day turkey.

For Lamar, practicing on Thanksgiving is tradition. The Tigers have done it 10 of the last 12 years, including the last three under coach Jared Beshore.

“It’s a very special time in our program,” Beshore said. “We don’t have any school. We have free time. It’s all football. It’s cool to be out on the field, knowing there are only four teams in the state practicing right now. Our kids are energized. Our coaches are energized. It’s a thing you have to appreciate as you go. You don’t want to let it go by quickly without sitting back and appreciating it.”

It’s a new feat for Seneca, which reserved its spot in the state semifinals for the first time since 2013 last week. Cody Hilburn’s Indians are relishing every minute of it.

“I think it’s awesome for our kids to experience that,” Hilburn said. “We were so close last year and got to the quarterfinal game, which was huge for us. It expedited the process for this year’s group. Our kids understood the process of what that game looked like. We went out and found a way to win it this year.”

And when both Big 8 West Conference rivals meet on Saturday in Lamar, it’s not just any other highly-anticipated rematch of Class 2 and 11-1 teams. It will likely mark the furthest two Big 8 teams have ever met in the playoffs.

Kickoff is slated for 1 p.m. from Thomas M. O’Sullivan Stadium.

“That just happened to be how they (MSHSAA) drew up the line this year,” Beshore said. “It’s very special for the conference. It’s really cool for both our communities to travel down the road to play a state semifinal game. It’s going to be a great atmosphere on Saturday. I’m really excited about our kids getting to be part of that.”

Added Hilburn, “I don’t think you see that often. I’ve said this a few times about the Big 8 West — our schedule is brutal. But I think it pays off this time of the year. I think that’s what won us the quarterfinal game is our physicality in the second half. That comes from playing in the Big 8 West every Friday night.”

Lamar, a 54-0 victor over Holden last week in the quarterfinals, has won its last eight contests by 20 or more points. During that stretch, the Tigers have outscored their opponents 405-75 and their lone loss came at Seneca in a 36-33 decision during Week 4 of the regular season.

Leading the way for Lamar is a pair of dynamic athletes in Joel Beshore and Austin Wilkerson. Beshore showed off his dual-threat ability last week by completing three touchdown passes and adding another on the ground.

The Tigers’ defense didn’t allow a first down to Holden until there was just one minute to play in the fourth quarter.

“Both teams have changed a little bit. Both of us are going to look back at the first game and make our adjustments,” Hilburn said. “There will be a little cat and mouse at the start of the game. Anytime you are in this type of game, winning the line of scrimmage and taking care of the football are always huge. You don’t want to give them any extra possessions. They are explosive enough without giving them anything. We have to take care of the football. We have to establish our run game.”

Seneca, a 28-14 winner over Liberty in the quarterfinals, opened postseason play with victories by scores of 42-0 over Hollister and 25-21 over Mount Vernon to win the district title. The Indians entered the final week of the regular season with an unblemished 8-0 record before falling to Nevada 49-14.

And Seneca relies heavily on workhorses Jackson Marrs and Gavyn Hoover to get the job done. Marrs, a running back, amassed 155 yards on the ground with three TDs on 27 carries in last week’s win.

Hoover, the team’s QB, added 106 yards on 17 carries, and he also showed the ability to throw by completing 5 of 8 passes for 63 yards with one TD.

“I’m not expecting too much of a difference as far as who they are,” Beshore said. “They are a hard-nosed, physical, well-coached, talented football team. We are going to have to play our best game in order to have a chance to beat them. Obviously, there will be differences scheme-wise and coaches are going to try and take advantage of each other. But I’m not expecting anything different from the first time. They are a physical, well-coached and talented football team.”

Derek Shore is a sports reporter for The Joplin Globe. Reach him at sports@joplinglobe.com.

What is your favorite part of the Super Bowl?