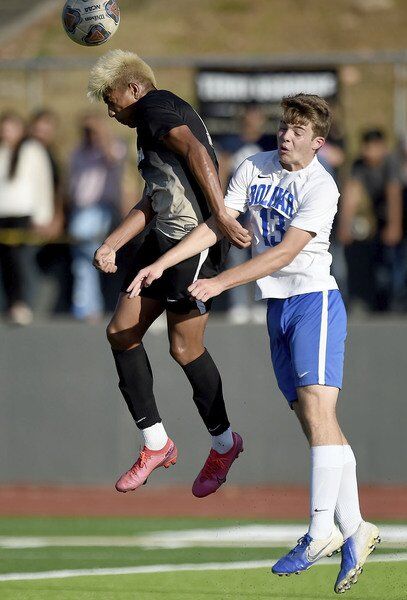 Neosho’s Alberto Robiedo (11) scores on a header as Bolivar’s Zach Liesen (13) defends during their match on Saturday at NHS.Globe | Laurie Sisk 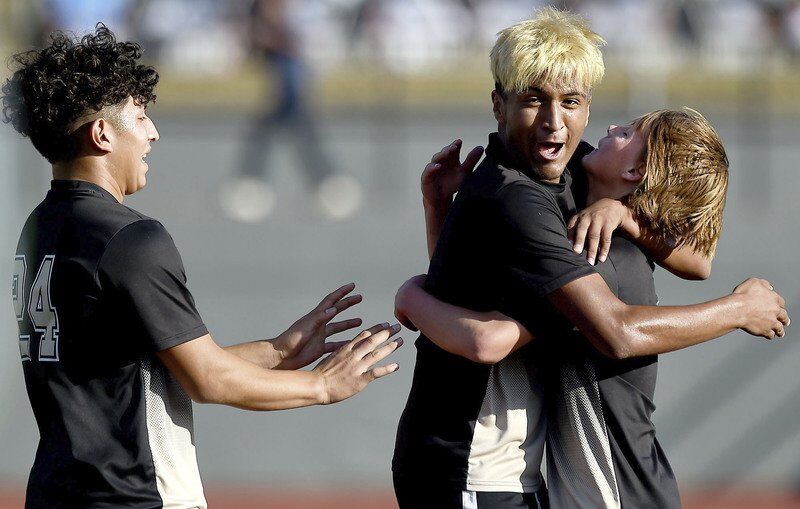 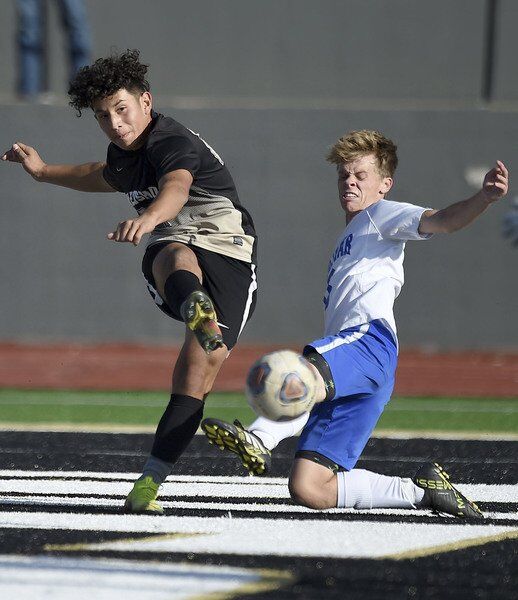 Neosho’s Juan Perez kicks in his first goal as Bolivar’s Luke Richards (8) defends during their match on Saturday at NHS. Globe | Laurie Sisk 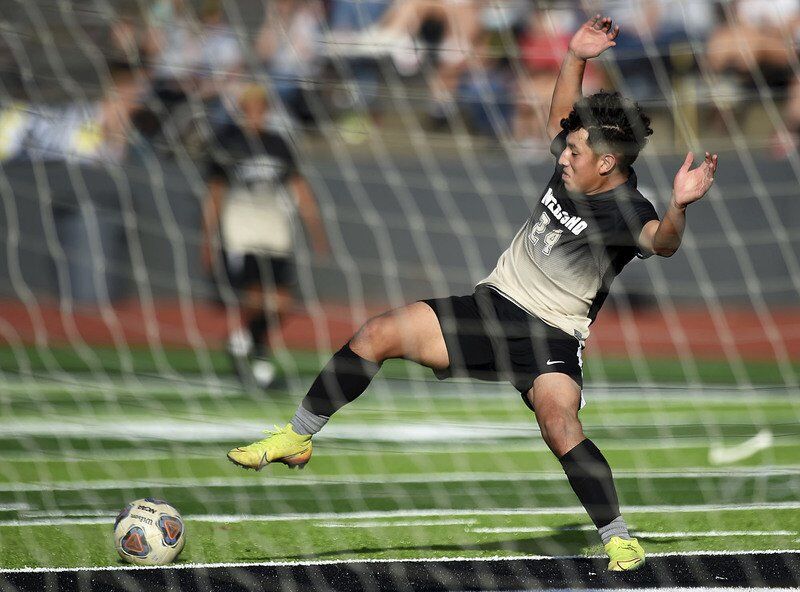 Neosho's Juan Perez kicks in his second goal during the Wildcats' match against Bolivar on Saturday at NHS. Globe | Laurie Sisk 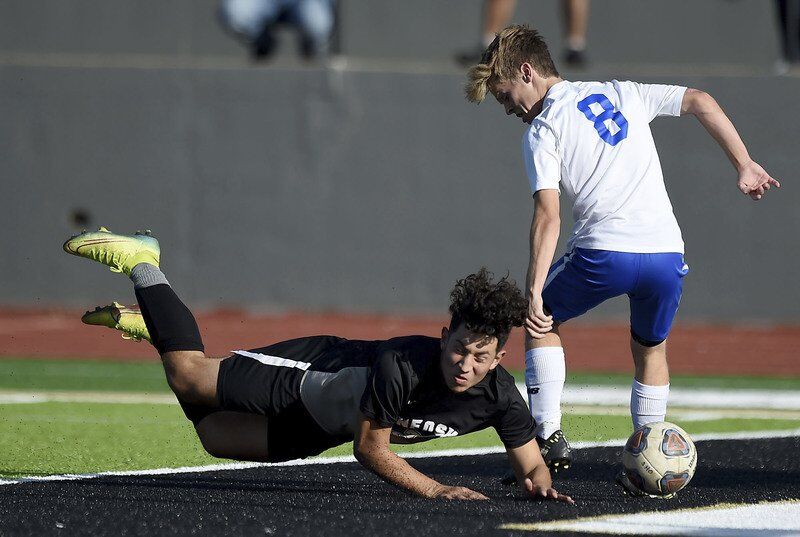 From the left: Neosho's Juan Perez and Bolivar's Luke Richards (8) battle during their match on Saturday at NHS. Globe | Laurie Sisk 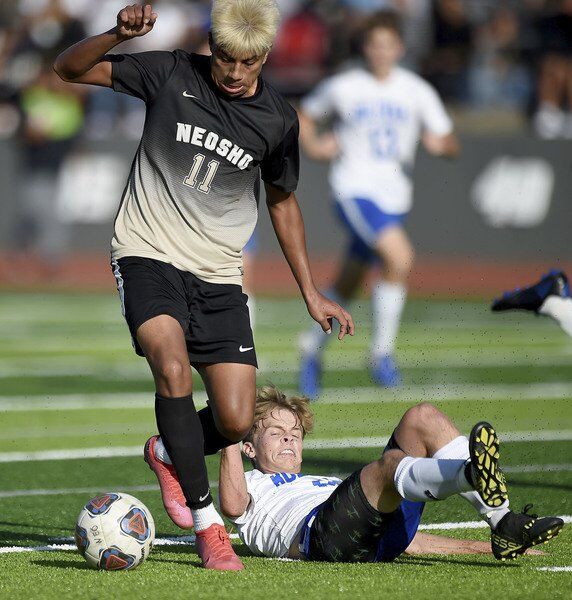 Neosho’s Alberto Robiedo (11) scores on a header as Bolivar’s Zach Liesen (13) defends during their match on Saturday at NHS.Globe | Laurie Sisk

Neosho’s Juan Perez kicks in his first goal as Bolivar’s Luke Richards (8) defends during their match on Saturday at NHS. Globe | Laurie Sisk

Neosho's Juan Perez kicks in his second goal during the Wildcats' match against Bolivar on Saturday at NHS. Globe | Laurie Sisk

From the left: Neosho's Juan Perez and Bolivar's Luke Richards (8) battle during their match on Saturday at NHS. Globe | Laurie Sisk

NEOSHO, Mo — It’s been nearly 60 days since Neosho soccer dropped its only game of the season.

And here’s the thing about the Wildcats — they just don’t accept defeat.

“These guys see some adversity and they always find a way to get it done,” Neosho coach James Carter said. “They show a lot of fight and character. I know we have won a lot in a row, but we don’t think of it like that. We just take it one game at a time, especially in the playoffs. We prepare for everybody and understand you have to come out with some intensity. It doesn’t really matter who it is, especially at this stage. We try to do that every day and eventually it pays dividends we hope.”

Neosho (19-1) continued to roll on Saturday afternoon, extending its winning streak to 16 games with a 5-0 shutout over Bolivar (10-11) in the Class 3 sectional round at Bob Anderson Stadium.

Not only that, the Wildcats punched their ticket to their fourth consecutive state quarterfinals. Neosho (19-1) will host Glendale (16-4) in a quarterfinal matchup at 6 p.m. Tuesday.

“There was definitely some adversity in the first half — a couple of balls that did not bounce our way and Bolivar played well defensively to hold them,” Carter said. “We did a great job in the second half. We just talked about keeping the pressure up and being patient. I was proud of them. They just executed in the second half and stayed positive, which was important.”

On the second shot of 11 shots in the second half, sophomore Juan Perez put the Wildcats up 1-0 in the 45th minute. He fought off pressure on the left side and blasted a kick that was blocked by Bolivar goalkeeper Trenton Arnold. The kick ricocheted back to Perez, who slotted the kick home inside the far post.

And the floodgates opened from there.

In a 13-minute span, shots on goal came thick and fast for the Wildcats. Senior Tre Darcy found the back of the net on the right side in the 50th minute followed by a header from five yards out by senior Alberto Robledo.

Perez added to Neosho’s lead when he beat the keeper, and found the net once more in the 59th minute. Robledo capped a terrific second half by the Wildcats with a goal off a penalty kick to round out the scoring.

“When you see the ball go in the back of the net a couple of times, it picks your spirits up,” Carter said. “I thought they did a good job of responding after they saw one or two go in and really put the pressure on to get more goals. That was a big momentum shift, for sure.”

In the scoreless first half, Neosho owned time of possession and shots on goal — with crosses and runs nearly yielding multiple goals. Arnold came up with several big saves.

Neosho’s best shot at scoring came in the 21st minute when Perez blasted a screaming kick that hit the lower left corner of the goal, but was shoved away by Arnold.

While Neosho’s offense was busy scoring in the second half, the Wildcats’ defense and goalkeeper Kayden Wood helped the team earn its 12th shutout of the season.

Neosho and Glendale are relatively familiar foes in the state playoffs. The Falcons won 6-2 in a quarterfinal match on Nov. 10, 2018.

“It’s a quick turnaround, so there will be a limited amount of preparation,” Carter said. “We will do that and get these guys ready, but first of all, we are going to enjoy this one. When you get into this level of play, you should celebrate them all even if you have a quick turnaround. We did that last year with each one. You gotta be thankful for it and not take this for granted.”