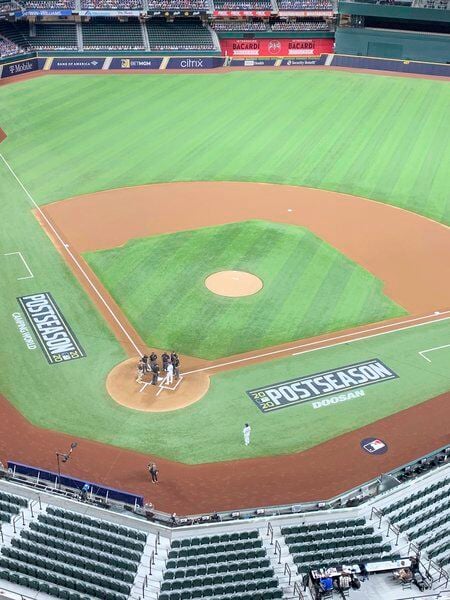 Here is the view from the press box for official scorer Will Rudd before Game 2 of the NLCS on Tuesday night in Arlington, Texas. Courtesy | Will Rudd 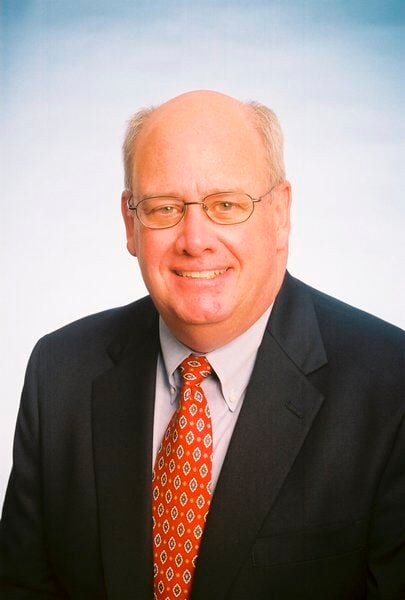 Here is the view from the press box for official scorer Will Rudd before Game 2 of the NLCS on Tuesday night in Arlington, Texas. Courtesy | Will Rudd

Will Rudd believes he has his dream job.

"I've been very fortunate to work in athletics all my life," he said. "They are paying me to go to baseball games or football games. I can't imagine anything better."

Rudd, who was born in Cassville and is a 1976 graduate of Neosho High School, is the Chief of Staff for the National Football Foundation in Dallas. And when he's not working for the NFF, he's one of three official scorers hired by the Texas Rangers during the baseball season.

This week's National League Championship Series between the Atlanta Braves and Los Angeles Dodgers is being played at the Rangers' ballpark in Arlington, Texas. Rudd was the official scorer for the Braves' 8-7 victory in Game 2 on Tuesday night, and he'll be the scorer again for Game 5 on Friday night.

"I moved to Dallas in 2007 to be with the National Football Foundation," Rudd said in a telephone conversation Wednesday afternoon. "When I got here I called the Rangers and said if somebody can't make it, I'd be willing to fill in. They worked me in a couple of games, and in 2012 they needed another full-time person, and I got on and have been doing that ever since.

"In 2015 and '16 when the Rangers won the Western Division, I did a divisional game. I had not done an LCS or World Series game, and the fact that the Rangers are able to host those series certainly was welcome."

Rudd also will be working during next week's World Series.

"They announced the World Series schedule, and I'm going to have Games 2, 5 and 7," he said. "Not that it will go to Game 7, but if it does, I'll be in the hot seat. And it's certainly an honor to be given that responsibility by Major League Baseball."

Rudd, who also graduated from the University of Tulsa in 1980, began working for the Kansas City Royals part-time in 1979 and full-time in 1980 as assistant in public relations under Dean Vogelaar. He was named the Royals' traveling secretary in 1984 and held that position for four years.

He left the Royals and served first as associate athletics director at UMKC and then worked for the NCAA from 1990-99 before it moved from Overland Park, Kansas, to Indianapolis.

"In the 1990s the Royals were looking to change over official scorers," Rudd said. "They reached out, knew I had seen a lot of games and thoroughly understood the games. So they asked me if I could do some, and I scored in the late 1990s and early 2000s."

As part of the COVID-19 safety protocols to limit people in the stadium, the official scorers did their work remotely during the regular season.

"Major League Baseball was very helpful, set us up with some different type of computer apps that gave you different camera angles, real-time video with no delay so you could actually see it as it happens," Rudd said. "By the time it went out over the air, you hadn't really missed anything. But for the postseason, they want us in the ballpark. Here in Texas for these two series, they are actually allowing fans in. It's good to hear some real folks giving some roars. We did the regular season in what was an aberration here in 2020 remotely, but they certainly plan on having us back in the park next year.

"The hardest part was just having to watch the game on a television or a monitor, hoping the director makes that cut in time when the ball hits the fielder's glove. In the ballpark your eyes can follow the ball, and if you want to look at a replay, then you can certainly do that. When you watch it on TV, you're certainly at the discretion of the director calling the game and if he gets that camera shot in a prompt, timely manner. But again, MLB did an excellent job assisting us with technology. It was a little challenging but certainly better than I thought it could have been."

Rudd worked for the NCAA as the director of national events. One of his responsibilities was organizing the banquet held for the teams at the Final Four.

He joined the National Football Foundation in 2007 through his acquaintance with Steve Hatchell, former Big Eight Conference administrator and now President and CEO of the NFF.

"He was looking for someone to help with the annual dinner in New York, a 1,500-person, black-tie event held at the Waldorf Astoria for 60 years," Rudd said. "I was director of external relations, and two years ago he made me Chief of Staff.

"The NFF overseas the College Football Hall of Fame, which opened a new facility in 2014 in Atlanta. We are the ones who select and induct the individuals who go into the hall."

Rudd's father, Dr. James E. Rudd, was an optometrist in Cassville, and his mother, Willa Don, was an elementary teacher. Will attended Cassville schools from kindergarten through sixth grade, then the family moved to Neosho when Dr. Rudd opened a second practice there.

"I still get back," Rudd said. "When I drive to Kansas City, I try to take an off-the-beaten-path route on Highway 71, which is now I-49, to head north. I have great memories there. Mom was a teacher at South Elementary School, and Dad had an office on Neosho Boulevard a couple of blocks from the high school.

"Baseball has always been my first love, even though the last 13 years have been in football. I certainly love college football, but anytime you can spend time at a ballpark and watch a major league baseball game, it's just great fun. I can't think of anything better."