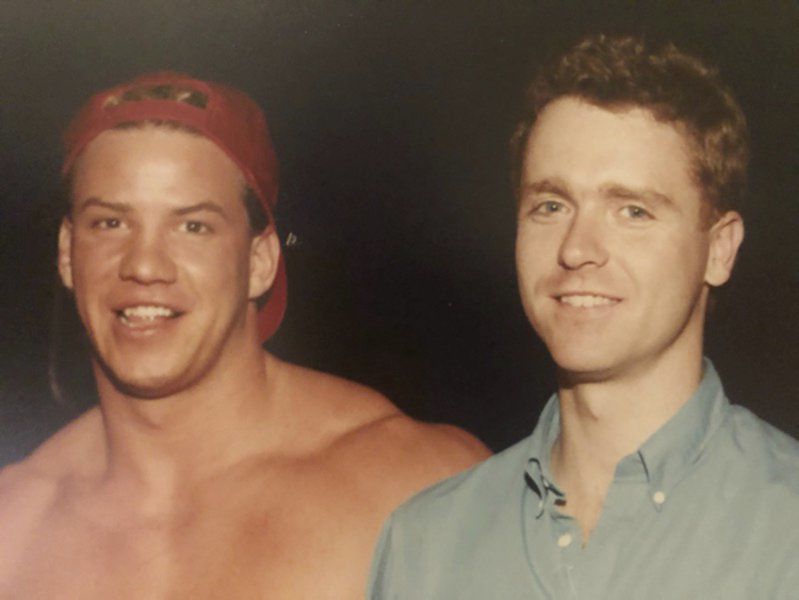 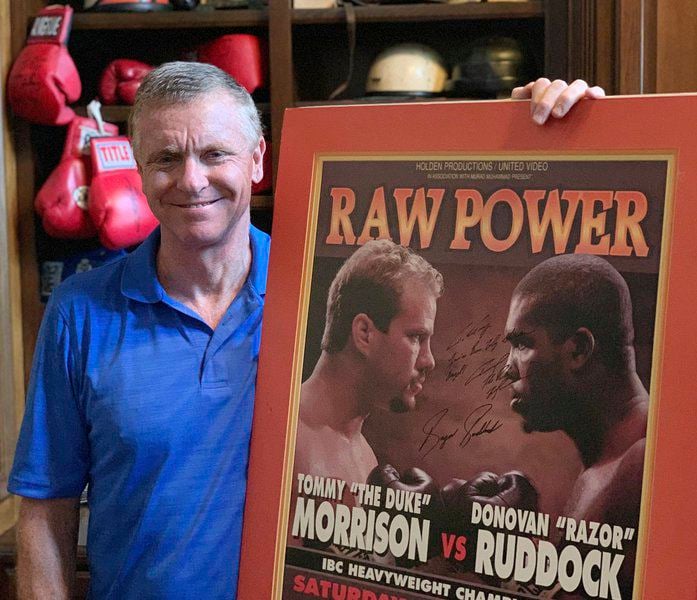 With more than 30 years of being a boxing promoter, this was my biggest challenge.

I have promoted world title fights, but I never experienced the highs and lows of promoting Tommy Morrison vs. Donovan "Razor" Ruddock in a heavyweight title bout on June 10, 1995, in Kansas City.

Three years earlier Tommy beat George Foreman for the heavyweight world title. After that fight we negotiated a purse of $8 million for Tommy to fight Lennox Lewis. This was huge money 27 years ago. This fight never happened because we took a fight before Lewis that was to be an easy win for Tommy. Michael Bentt knocked out Morrison, and the $8 million payday with Lewis was gone.

Everyone dropped Tommy, his manager and his other promoter. I was left alone as Tommy’s promoter and had to take his next fight for $60,000, a deflating amount from $8 million.

Flanked with his trainers Tom Virgets and Doug Dragert, we started to rebuild him. Tommy won his next seven fights and was again being called one of the world's best heavyweights. I knew we needed to make a signature win to get Tommy back to a title fight.

This is when I made the boldest decision of my life — promote Tommy in a pay-per-view event, and I was going to be the sole promoter. The risk was I had to raise millions of dollars in eight weeks. Without having the money, I sent a deposit of $50,000 to hold the PPV date, then I signed a contract with Razor Ruddock to fight Tommy. I also signed a contract for the legend Roberto Duran to fight on the event. Many contracts were signed from advertising to television production companies to produce the event, and I was personally on the line to pay it all.

I had $45,000 to my name, and the pressure was killing me as I was trying to raise the money. I was in way over my head.

Every investor I met with declined. Tom Virgets was getting very concerned, so he broke from training Tommy and went to Oregon with me to meet my last hope for an investor. We were turned down again. I was on the flight back with Virgets and I will never forget him asking when do I have to make the next PPV down payment. I said, "Another $50,000 tomorrow."

Virgets said, “Tony, you did an amazing job, but it’s time to give up.”

I totally trusted Virgets and he was looking out for me. I just couldn’t give up. The next day I emptied my bank account to make that deposit, knowing I had only 10 more days to raise $3 million.

I was young and my wife was pregnant with our second child. Words can’t describe the stress I was under. Virgets and I made sure Tommy never knew of the problems. We only wanted him to focus on winning the fight with Razor Ruddock.

Four days later I found a financial backer, a corporation named United Video and it was located six blocks from my house. It was honestly a miracle to have a major corporation invest this kind of money on such a short notice.

The problems were only getting ready to begin.

I set up a press tour for Morrison and Ruddock to take place in eight major cities. First press conference was in New York City, and all the media showed up. Who didn’t show was Razor Ruddock. I was so upset, and his promoter kept telling me he missed his flight.

We go to our next press stop Miami, Florida. The press all showed and again no Ruddock. I am beside myself as Ruddock’s promoter kept making excuses. My cell phone rings and I answer to a man saying, "Tony, this is Razor Ruddock. I never received a contract and I don’t know how much I’m getting paid."

I said, "Razor stop playing games. You do know what your being paid. I have your signed contract with your signature." He tells me the man claiming to be his promoter is no longer with him and he must have forged his name.

OK, here is the dilemma. Someone is lying. If I believe Ruddock’s promoter, then Ruddock doesn’t fight. If I give Ruddock a contract from me without the promoter, Ruddock will fight but I would be sued for millions by his so-called promoter. Keep in mind I was a young promoter doing this show on my own. No time to go to court before the fight, so I went with my gut. I signed a contract directly with Ruddock to fight Morrison. We finished the press tour with both Ruddock and Morrison. All is good.

It’s three weeks before the fight, and we have spent a fortune in advertising to promoter the pay-per-view.

Next problem, Roberto Duran has a signed contract but is demanding more money to fight. Much more. This fight was being promoted heavily in Panama, and I desperately needed him to fight. At this time every dime I had was in this event; I mean, I couldn’t make my car payment and I couldn’t go back to the investor. A close friend loaned me the money and now the fight is back on.

As Morrison’s promoter, I found the smallest ring possible because we believed it would give Morrison the advantage. Nothing is wrong with doing that, but I have to admit I might have gone too far with this. The ring was only 16 feet in between the ropes. In boxing that’s unheard of (standard ring sizes are 20, 22 or 24 feet). It’s like fighting in a phone booth.

Four hours before the show, I’m in my room getting dressed and my phone rings. It’s Ruddock’s trainer. “If you don’t get a larger ring, Ruddock will not fight!”

At this time I couldn’t change the ring if I wanted to. Television production cameras and lighting are set. I told him there is nothing I can do. One hour before the event my cell phone rings and again it's Ruddock’s trainer. “Ruddock is in the hotel lobby waiting on a cab for the airport."

I told him I will be there in two minutes. I remember running to hotel thinking all this work and everything I have gone through, I’m going to lose this fight.

I walk in the lobby. Ruddock was in street clothes, bags packed. He said he wasn’t fighting in that ring and he was serious. I was having a meltdown as I made the biggest bluff of my life.

I started screaming, "I'm sick of both you fighters. Tommy said he won’t fight in that ring either."

I turned and walked away. Seconds later I hear Razor yelling, “Tony, I will fight in that ring, and I will knock your boy out."

During the 1990s it was the era of bomb threats. If I did one thing right, it was this. I contacted the city authorities and asked if we could do a sweep through the arena before the doors open. Dogs were brought in the day of show.

Thirty minutes before the doors opened, there was a bomb threat. The fire marshal called to tell me. He also said no worries. The arena was cleared hours ago and the doors will open as scheduled. Wow.

'I GOT THIS FOR YOU'

The event begins before a packed house at Municipal Auditorium.

The undercard fights were great, and Roberto Duran had a great win by KO.

I walk in Tommy’s dressing room right before he leaves for the ring. I will never forget Tommy gloved up and when I was leaving, Tommy yells, “Tony, come here.” He whispers in my ear, “You’re my brother. You did your job; now I will do mine. I got this for you.”

Morrison and Ruddock enter the ring to one of my favorite entrances laced with a large amount of pyro.

Michael Buffer announces both fighters and gives his signature “Lets get Ready to Rumble.” At this moment I know this fight is happening, but I’m more stressed than ever. If Tommy wins millions of dollars, we'll be made for his next fight. If he loses, we are both back to ground zero and I will be broke.

Round 1. Ruddock drops Tommy with a huge upper cut and Tommy looks hurt.

During the next few rounds it was an all out war.

Round 6. Tommy looks as he is out of gas. At this point, I was having serious doubts that we could win.

Then it happened — one of the greatest left hooks in the history of boxing.

Tommy dug deep and exploded with a massive left hook. Ruddock’s feet went in the air as he landed on his back. Somehow Ruddock gets up, but Tommy steps back in giving everything he has left. Throwing a barrage of punches nailing Ruddock, and the fight was stopped 5 seconds before the bell rang.

June 10, 1995, was the greatest night of my life, and it changed my life forever. This event opened up so many doors in the future.

Later that year I was sued in a New Jersey federal court for signing a contract directly with Ruddock. The judge ruled his former promoter forged Ruddock’s signature, and I won all claims. The former promoter was ordered to pay back all money he received from me.

Tommy Morrison will always be known as one of the greatest warriors in boxing. What the world does not know is Tommy was the most loyal fighter in boxing. We never had a contract between us, only a strong bond and friendship.

TONY HOLDEN lives in Tulsa and continues as a boxing promoter. He introduced the Four State Franchise in July 2014, and it included Tommy Morrison's son, Trey Lippe-Morrison.