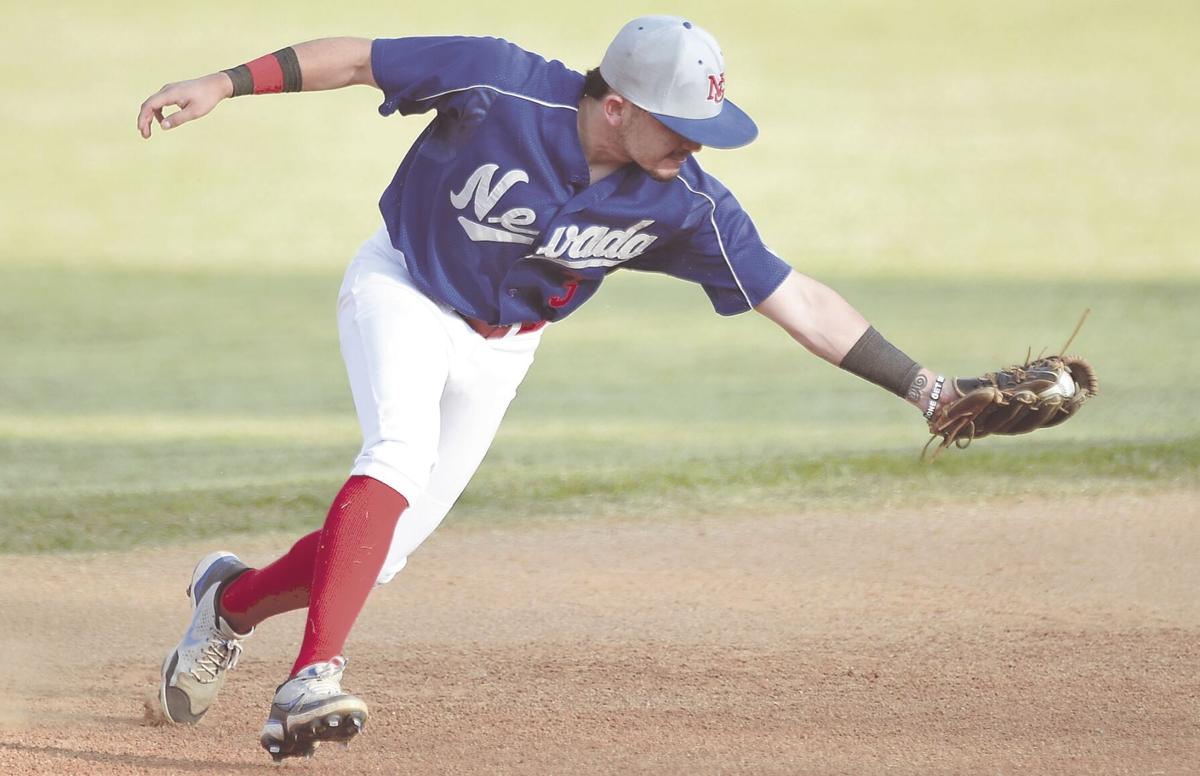 Nevada shortstop Jake Frederico stretches to field a groundball during the Griffons game against the Outlaws on Tuesday night at Nevada. 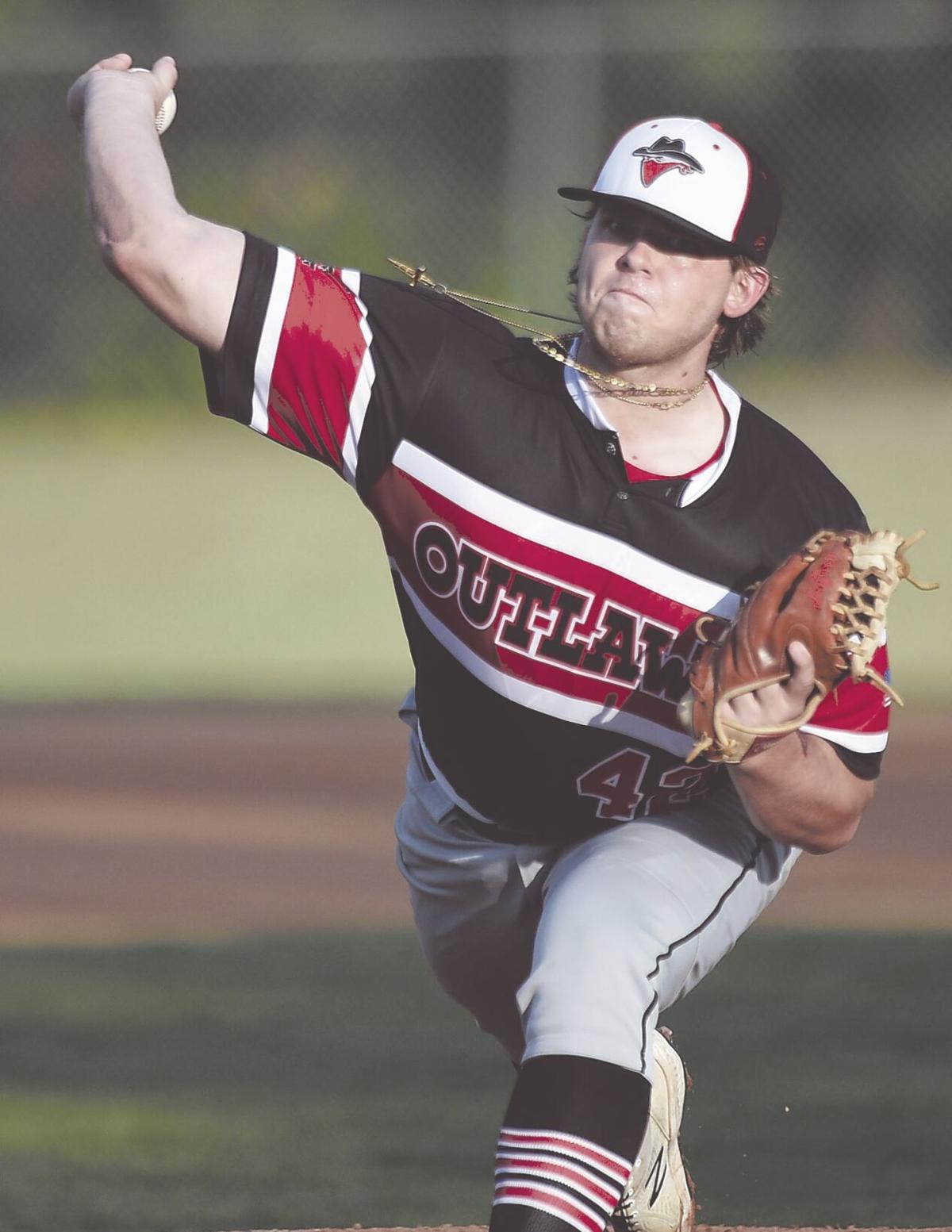 Joplin's Lucas White delivers a pitch to the plate during the Outlaws game against Nevada on Tuesday night at Nevada. 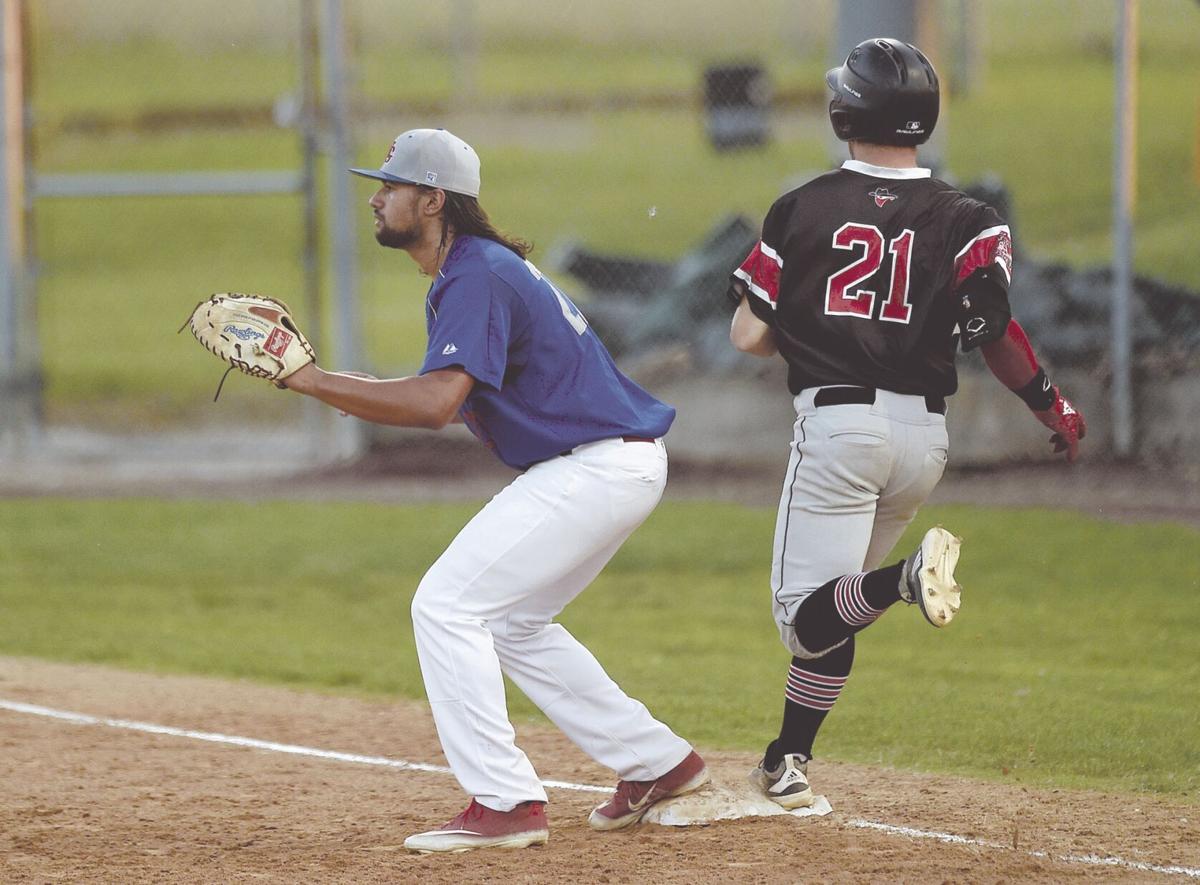 Joplin’s Brandon Ulmer (21) beats the throw to first as Nevada’s Connor Wytko covers the base during their game on Tuesday night at Nevada.Globe | Laurie Sisk

Nevada shortstop Jake Frederico stretches to field a groundball during the Griffons game against the Outlaws on Tuesday night at Nevada.

Joplin's Lucas White delivers a pitch to the plate during the Outlaws game against Nevada on Tuesday night at Nevada.

Joplin’s Brandon Ulmer (21) beats the throw to first as Nevada’s Connor Wytko covers the base during their game on Tuesday night at Nevada.Globe | Laurie Sisk

NEVADA, Mo. — Don’t let them fool you. Even pitchers can swing it, too.

Beiter, who was primarily used as a pitcher for Bryce Darnell’s Lions this spring, came through with the bat when it mattered most for the Nevada Griffons.

With the bases loaded and nobody out in the bottom of the ninth inning, the second baseman ripped a walk-off RBI single through the left side as Nevada topped the Joplin Outlaws 4-3 on Tuesday night in MINK League action at Lyons Stadium.

And yes, Beiter had a hitters’ approach after jumping ahead in the count 3-1 to Joplin’s John Kea.

“The bases were loaded and my teammates in front of me got on,” Beiter said. “I figured he had nowhere to put me. He had to come right at me with the fastball and it was right in my wheelhouse.”

“He was just battling,” said Griffons first-year manager Jason Jacome, who played in the big-leagues for parts of five seasons. “All he had to do was basically hit the ball, hit it somewhere and we were going to try and score a run on that whether it would be a flyball in the outfield or a ground ball in the infield. … We are running on contact and we are taking a chance, so we can score a run there if he makes contact.

“He just happened to barrel it and hit the ball out to the outfield.”

Tyler Davis and Bryland Skinner reached on back-to-back errors by the Outlaws (3-2) on bunts to open the frame. Using a little small-ball, Cameron Saso dropped a bunt single to load the bases for Nevada before Beiter’s heroics.

“You never really see bunting in summer ball,” Beiter said. “There are a lot of hit and runs (in summer ball), but our guys came up and got some bunts down. (Saso’s) bunt ended up being a beautiful bunt for a hit. That really helped us.”

While defense had been their calling card so far this season, it was the Outlaws’ undoing on Tuesday night.

“We played clean defensively all year long,” Joplin manager Chris Dawson said. “We knew eventually it was going to come back and get us, but you live and you learn. It’s simple bunt coverages, simple pick up the baseball and throw it to first. We just got sped up. No big deal. It was going to happen eventually. It just happened tonight. We have the day off tomorrow, so we can reset and clean it up, and get going again on Thursday.”

Nevada (3-3) struck first via an RBI single from Chase St. Amand in the bottom of the second inning. Then one frame later, the Griffons doubled their advantage thanks to a run-scoring double from Jesse Fonteboa.

On the mound, Griffons starter Dustin Niles had a no-hitter through five innings before Joplin finally broke through with three runs on as many hits to take a 3-2 lead in the sixth.

Jeb Jenkins got things going for the Outlaws with a leadoff walk, and Ethan Lopez laced a sharp single before Logan Cline roped a high-arcing flyball to deep center field for a two-run triple to tie the game.

“(Logan’s) hit was a missile,” Dawson said. “We were working on it earlier today. He’s been trying to work on a part of his game and I told him, ‘Hey man, let’s get the barrel out and let it play a little bit.’ He was able to time up a fastball. He didn’t miss it. He absolutely smashed it.”

Ethan Ellis gave the Outlaws a 3-2 lead with an RBI groundout to the shortstop. But Beiter tied the game at 3-3 for the Griffons on an RBI double to left-center field in the seventh.

He finished 2 for 5 with a pair of run-scoring hits to pace Nevada’s six-hit attack.

“Honestly, I’m just looking to have a lot of fun this summer,” Beiter said. “I want to win a lot of ball games. It’s always fun in the summer. It’s a lot of fun with these guys. There’s a bunch of good ballplayers.”

Sebastian Kirchner notched the victory for the Griffons. He tossed two shutout frames in relief while striking out four batters.

"Kirchner has just been phenomenal so far," Jacome said. "He hasn't allowed a run. He probably has 11, 12 or 13 strikeouts in his three outings. That's what we expect. These guys are good college players. They are here for a reason."

Joplin had three hits total — one each from Lopez, Cline and Jared Toler. Lukas White fanned five batters over two innings of one-run ball while Clayton Saporito covered the next 4 2/3 innings for the Outlaws. He struck out three, walked two and allowed two runs on three hits.

“Hats off to Nevada,” Dawson said. “We just have to get the offense going for multiple innings.”