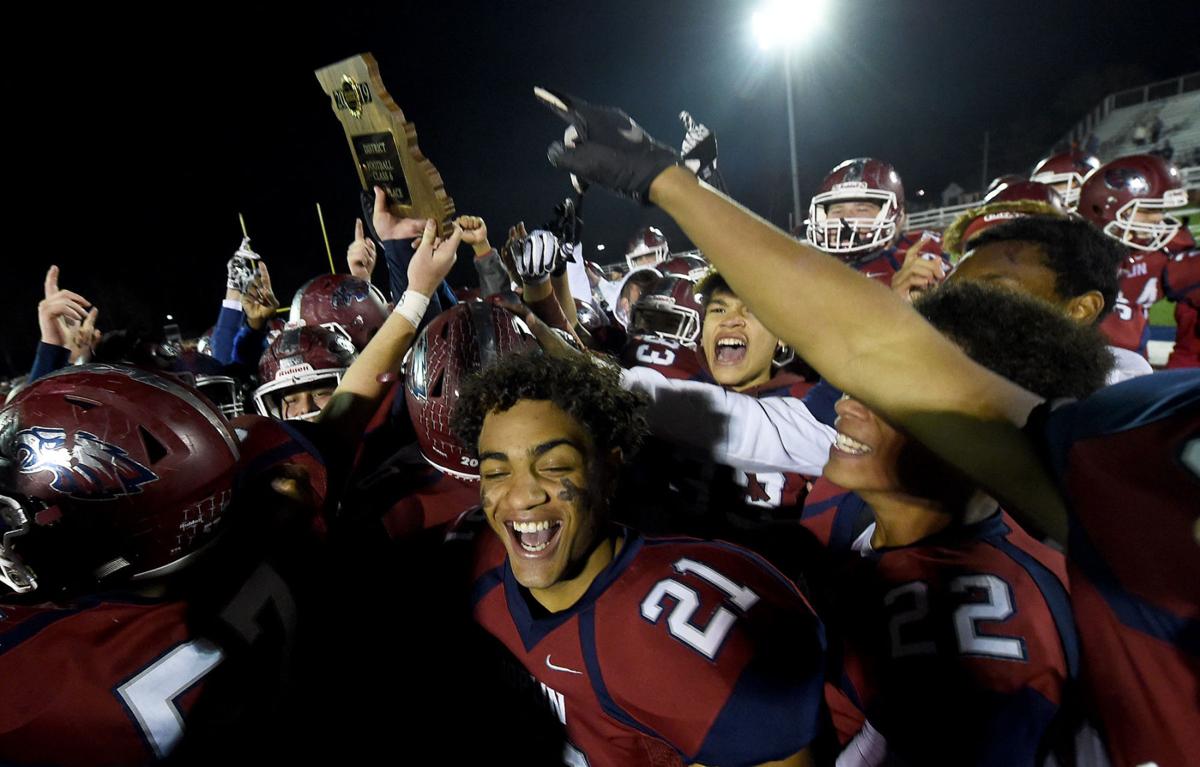 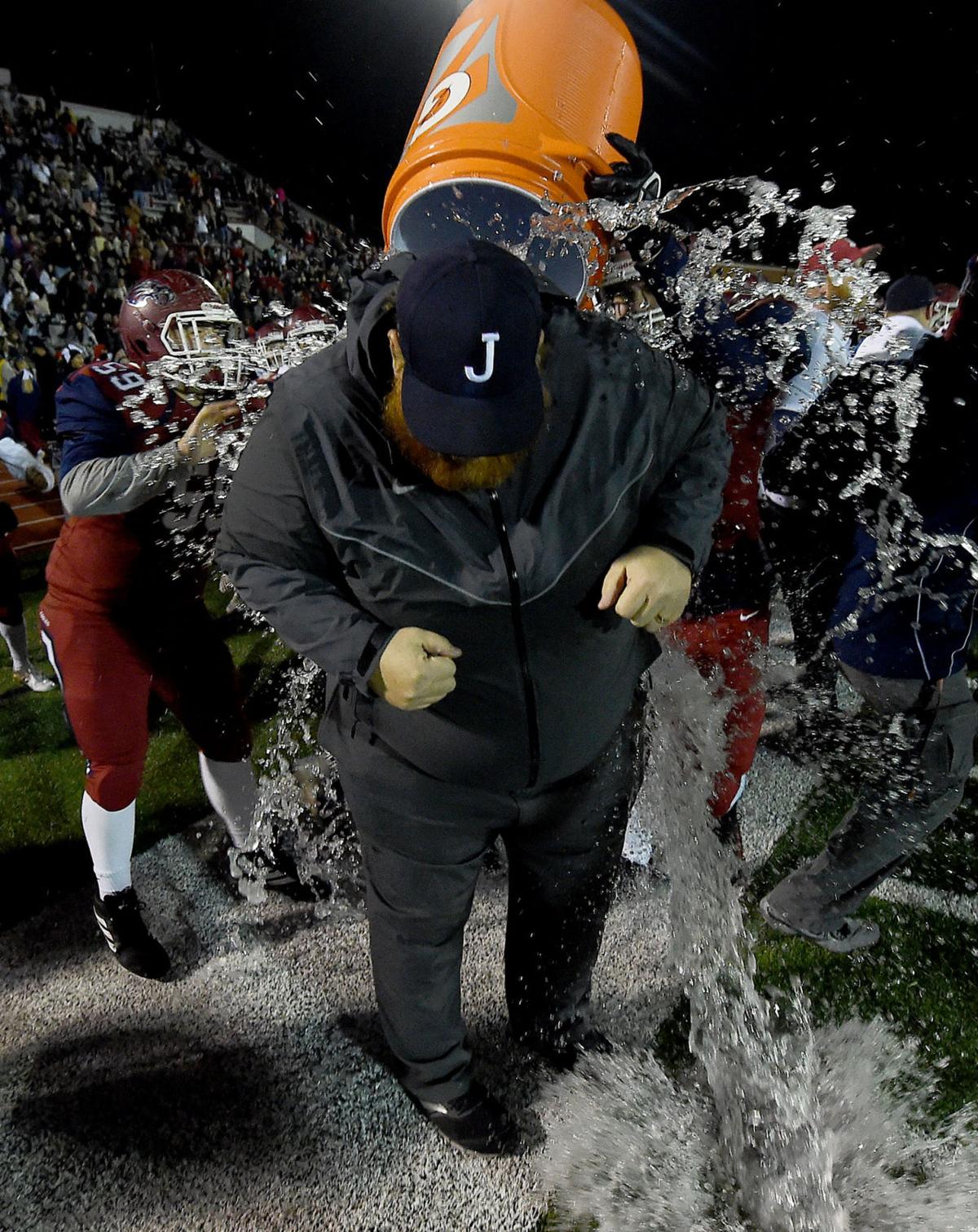 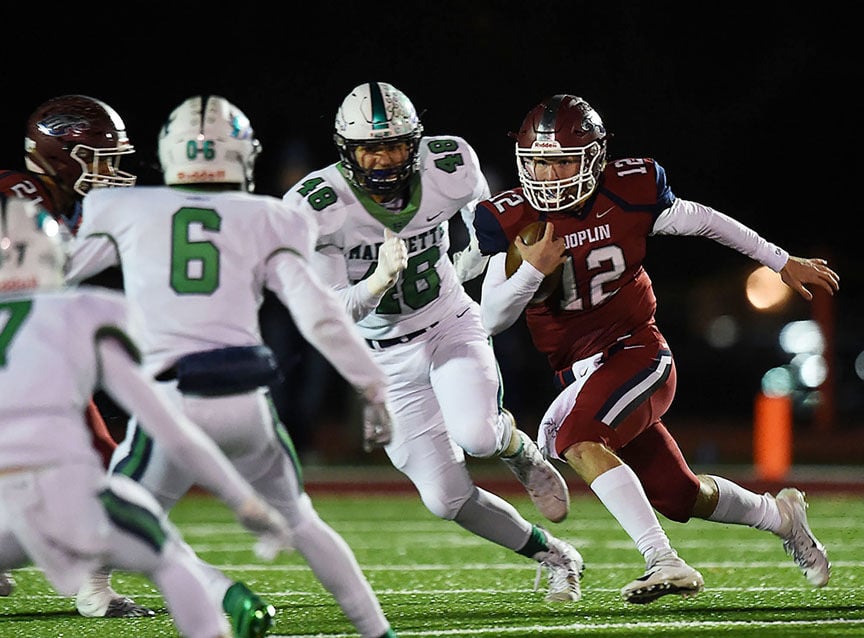 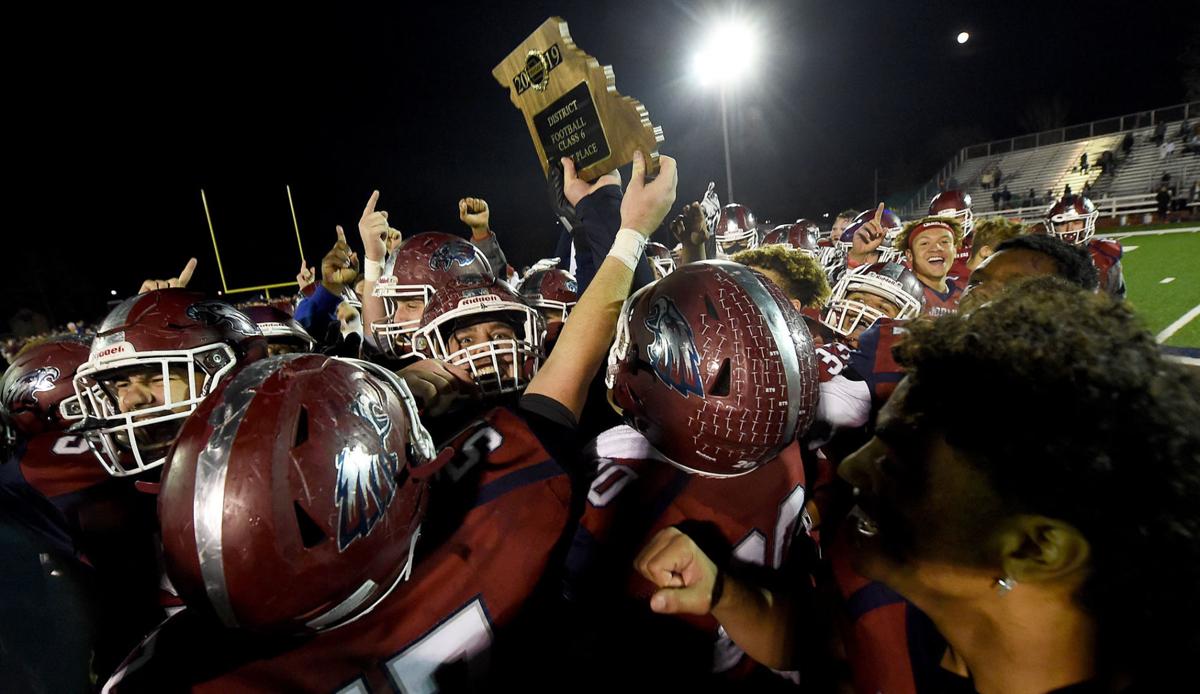 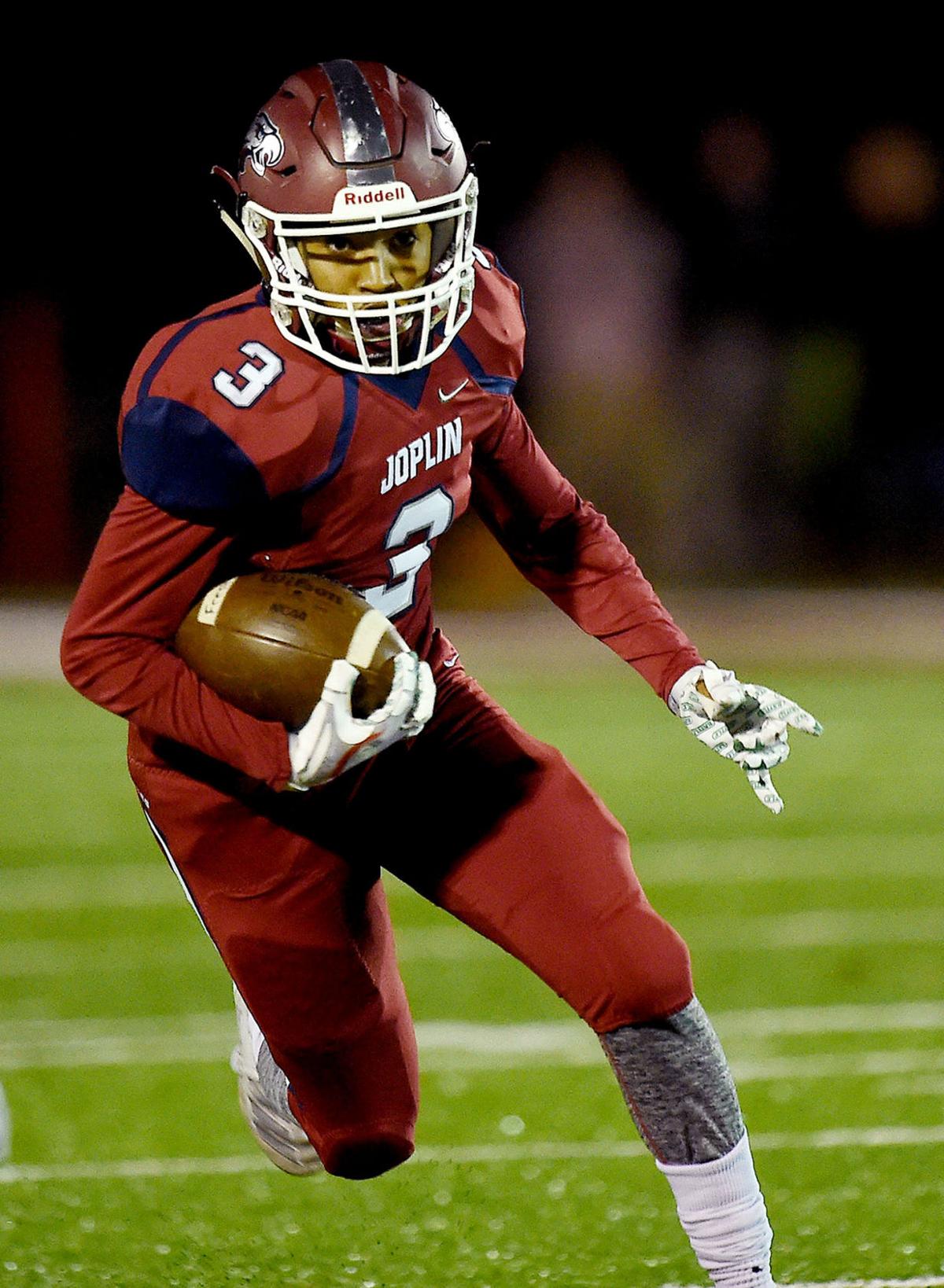 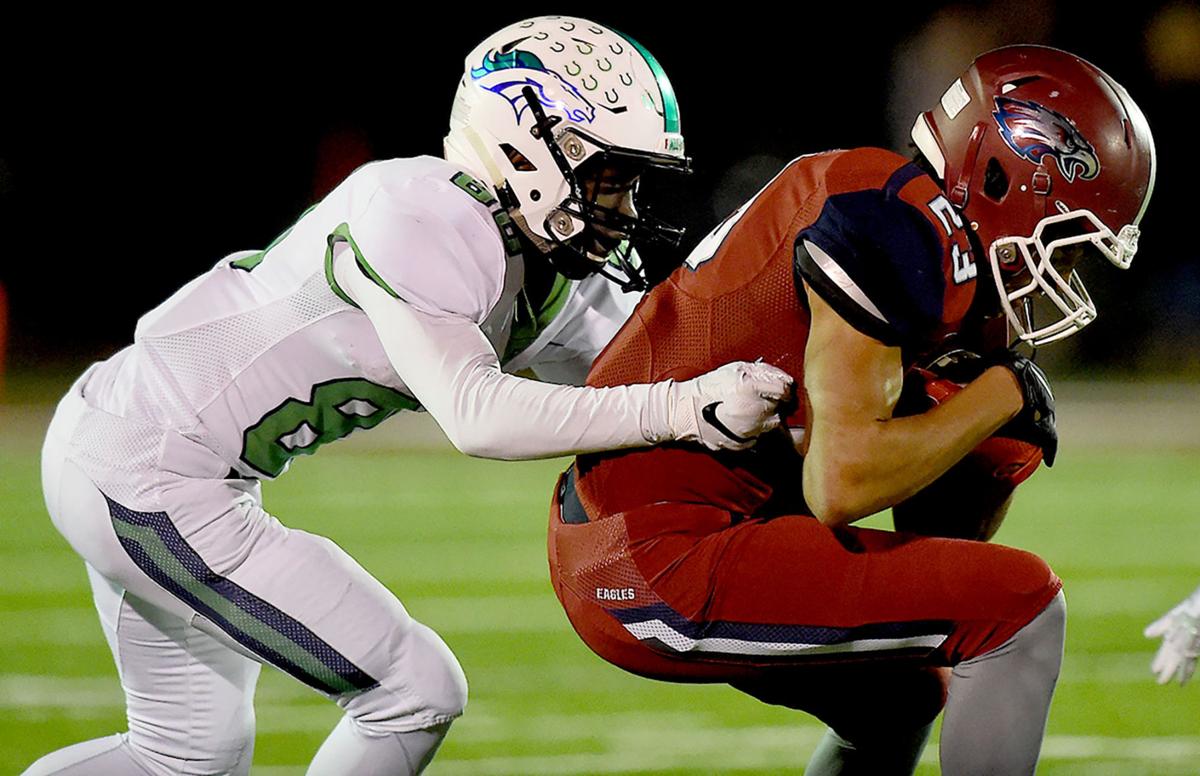 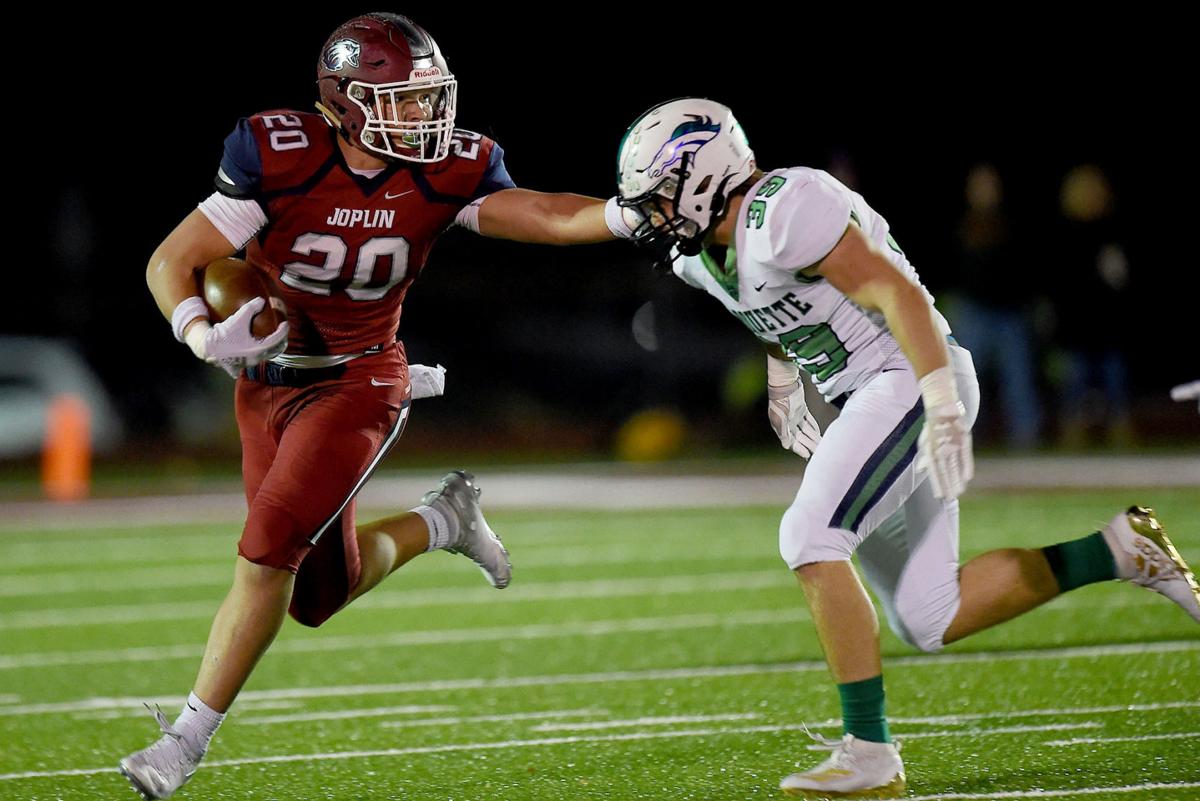 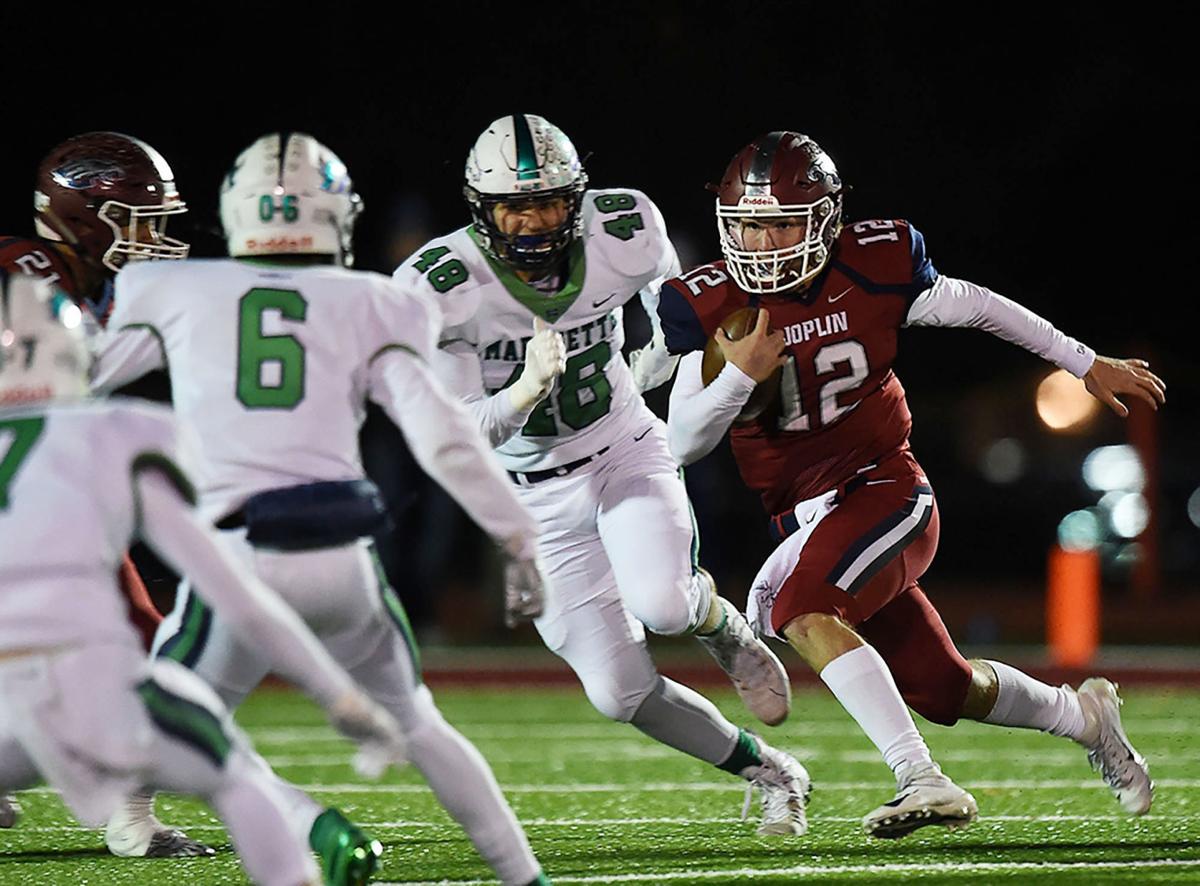 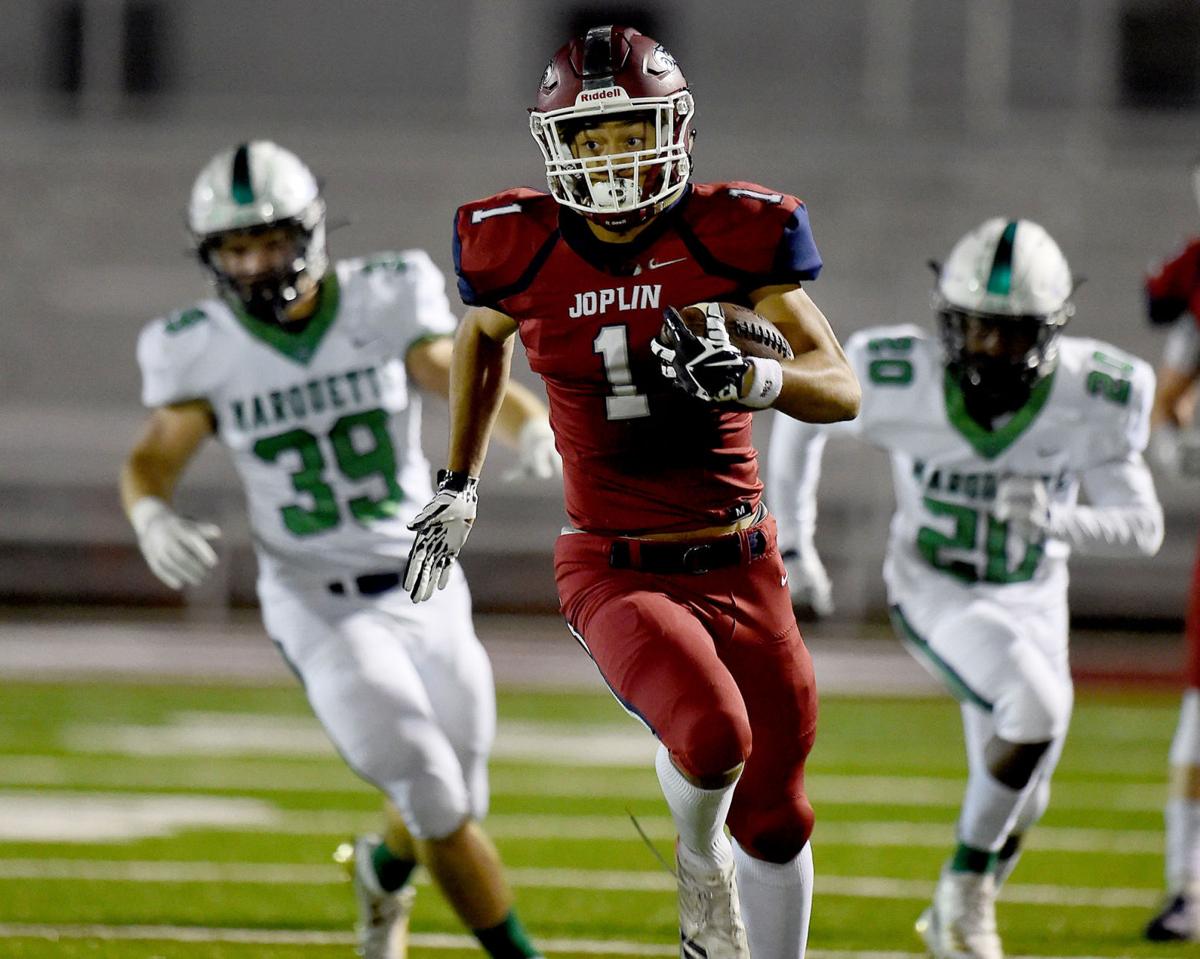 Joplin's Zach Westmoreland (1) eturns a punt for a touchdown as Marquette's Matt Kadlec(39) and Malique Flenoid (20) give chase during their Class 6 District 3 Championship game on Friday night at Junge Stadium. Globe | Laurie SIsk

Joplin's Zach Westmoreland (1) eturns a punt for a touchdown as Marquette's Matt Kadlec(39) and Malique Flenoid (20) give chase during their Class 6 District 3 Championship game on Friday night at Junge Stadium. Globe | Laurie SIsk

For the second time in two years, Joplin is headed to the Class 6 state semifinals.

The top-seeded Eagles (12-0) scored on the opening drive before ultimately jumping out to a 21-0 lead in the first half. Second-seeded Marquette (10-2) scored as time expired in the first half, but failed to reach the end zone again as the Eagles pulled away to a 35-7 victory to win the Class 6 District 3 title for the second straight season on Friday in the final home game of the season at Junge Field.

“One of the goals that this team set was to be undefeated at home, and we did that,” Joplin coach Curtis Jasper said. “We also hung another banner, so reaching those two goals of being undefeated at Junge and winning another district title was huge. Now, we get another guaranteed week to continue the process.”

The Mustangs won the coin toss and chose to defer. The Eagles drove 79 yards on 10 plays, seven of them were passes, with quarterback Blake Tash passing to the far sideline to a waiting Zach Westmoreland, who faked inside before spinning outside past his defender and sprinting to the end zone for a 21-yard touchdown to give Joplin a 7-0 lead.

“It was huge for us to come out strong and take it right to them,” Westmoreland said. “When we get off to a fast start, there are not a lot of teams who can slow us down.”

Three plays into Marquette’s opening drive, Dominick Simmons picked off Mustangs quarterback George Williams and returned it to the MHS 31.

On the first play of the ensuing drive, Tash found Trayshawn Thomas over the middle for a 31-yard touchdown to push the lead to 14-0 with 7:53 left in the first quarter. Tash completed 17-of-21 passes for 242 yards and two touchdowns, while Thomas caught six passes for 75 yards and a score.

“Our offensive line did a great job pass blocking tonight,” Tash said. “They were the key to our passing success. They gave me tons of time, holding their blocks so I could deliver the ball.”

The Eagles made it a three-score lead with a big play by the special teams when Westmoreland, who had six catches for 102 yards and a score, fielded a punt at the 17-yard line before taking it to the house 83 yards for a 21-0 advantage with 7:31 to play in the first half.

Joplin running back Isaiah Davis, who finished with 15 carries for 78 yards, scored his first of two touchdowns with a 3-yard run to give the Eagles a 28-0 lead with 3:06 left in the first half.

Marquette reached the scoreboard for the first time as time expired in the first half when Williams completed a 7-yard pass to running back Chris Kreh to make the score 28-7 into the intermission.

Kreh came into the night averaging nearly 193 yards rushing per game. The Joplin defense limited him to 28 carries for 98 yards.

“It was an unbelievable job,” said Joplin linebacker Scott Lowe, who finished with a team-high 12 tackles. “We knew how good he is, and tonight we wanted to show the whole state that our defense is legit.”

The Mustangs took possession to open the second half and chewed up 10:13 of game clock with an 18-play drive from their 20 before the Eagles’ defense forced an incomplete pass a fourth down-and-9 from the 14 for a turnover on downs.

“I thought we played really well tonight on defense,” Jasper said. “We bent a little bit but never broke. We flew around and did a really good job of pushing the pile backwards. I was proud of the defensive effort tonight.”

Joplin answered the long drive with one of its own, marching 85 yards on 15 plays that culminated in a 5-yard rushing score by Davis to push the lead to 35-7 with 7:53 left in the game.

“This offense is incredible,” Joplin lineman Logan Myers said. “We can either gas them on the pass or gas them on the run. … (The linemen) were told this was going to be a battle tonight. We worked really hard this week. We had to win the little things to win this game, and we did.”