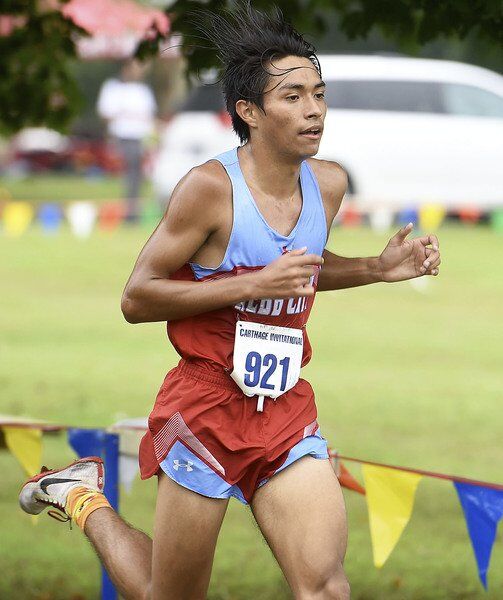 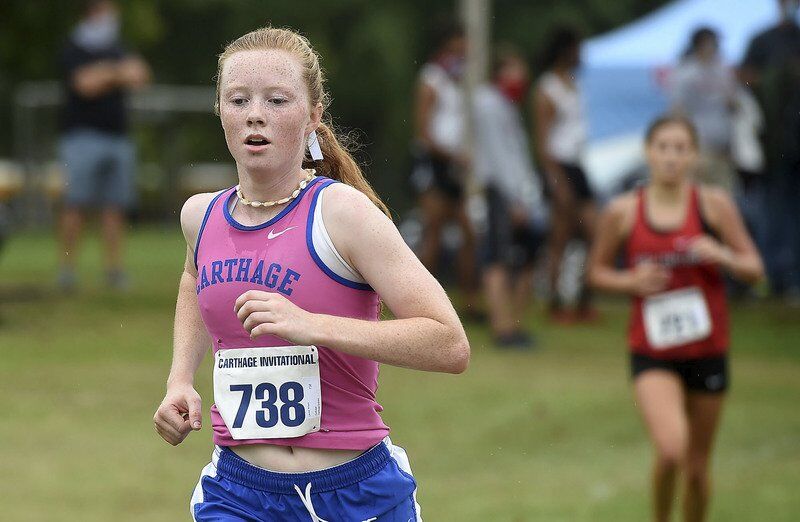 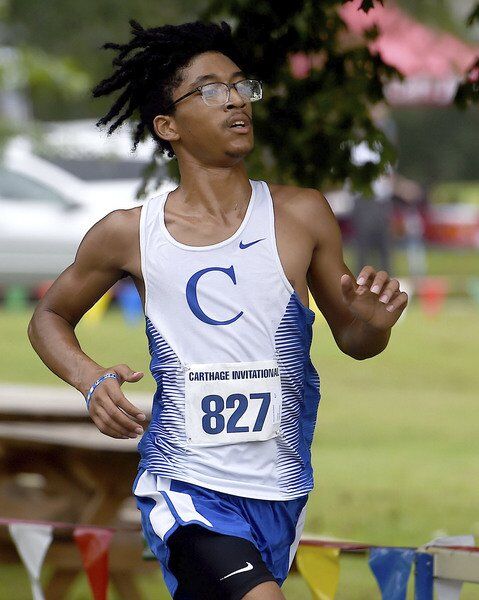 Carthage's Mariques Strickland makes his way to the finish during the 47th Annual Carthage Invitational on Thursday morning at the Carthage Golf Course. Globe | Laurie Sisk 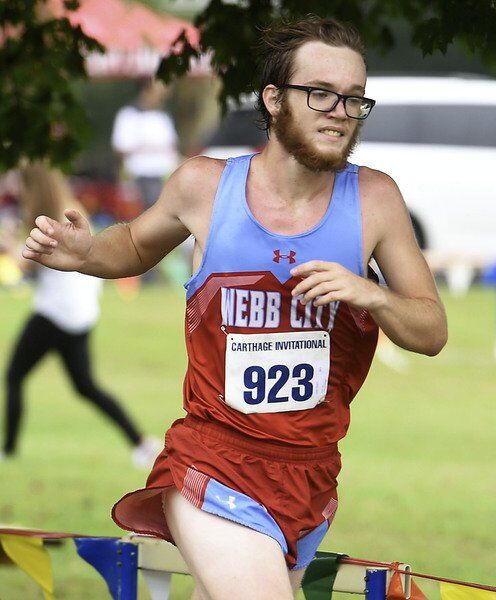 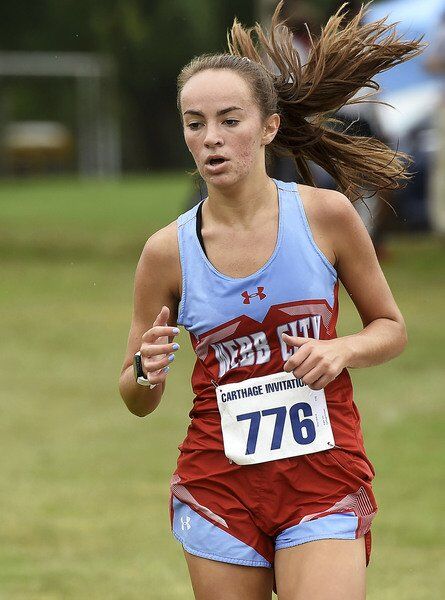 Carthage's Mariques Strickland makes his way to the finish during the 47th Annual Carthage Invitational on Thursday morning at the Carthage Golf Course. Globe | Laurie Sisk

CARTHAGE, Mo. — The depth of Webb City's girls cross country was on full display as the Cardinals captured the team championship Saturday morning in the annual Carthage Cross Country Invitational at the Carthage Golf Course.

The Cardinals had six runners among the first 13 finishers — only five are used to determine team scores — and earned the crown with 31 points. Mountain Grove, which had the top-2 runners, was second with 46, followed by Carthage 65, Carl Junction 100 and Glendale 104.

Riley Hawkins finished in third place in 21 minutes, 39 seconds, to lead the Webb City girls. She was one second ahead of teammate Hally Philpot, and Abi Street took sixth with 22:00. Moments later, the Cardinals' Elliett Capron, Mileah Metcalf and Isabelle Lopez crossed the finish line in 11th through 13th places, respectively.

"Mountain Home looked good up front, but we put our five or six in front of their (No.) 3," Webb City coach Dustin Miller said. "That helps. That goes a long way.

"Our girls had a rough week last week (at Bolivar). We worked on some things, more mental than anything. And they came out here today and proved that they are one of the best Class 4 teams in the state of Missouri. They've worked tirelessly all the time. They do the right things. They work hard. They like each other. Now we're trying to flip that switch that we belong with the big teams in state. And they did that today."

Marcie Cudworth of Mountain Home won the race in 20:39, and teammate Rylee Patterson was next in 21:13.

Lauren Wilson of Carthage was eighth in 22:45, and the Tigers' Kimberly Hernandez was ninth in 22:51.

"I thought our girls raced hard," Tigers coach Andy Youngworth said. "We only ran five today. We have a couple of younger girls who have never run a 5K, and I didn't want this to be their first one. It's been a good day."

"Hannah Franks just came back from being quarantined, and she ran really well today for just coming back," Bulldogs coach Kyla Walnofer said. "Some other young ones, Sadie Burchett ran really well. Riley Briggs actually has a hurt foot right now, but she came out and toughed it out."

Mariques Strickland of Carthage was the area's top finisher in the boys race, finishing third in 17:05.

"The weather (overcast, temperature in the low 60s) honestly makes you feel better," he said. "It cools me down. I can do this.

"This is the easiest year it's been so far. The hills didn't hit me that hard. It was slick on the concrete, but that's when I usually jumped over it."

"Mariquis Strickland ran really well here, finishing third," Youngworth said. "He was a state qualifier from last year, and he has done a great job.

"Our pack was really tight. Our No. 3 runner from last weekend was No. 6. We had somebody good enough to pick up for him. That's the good thing about having really seven guys pretty close together ... somebody can have an off day and somebody will pick up for them. It's a pretty unselfish group of guys."

Roman Borboa was sixth (17:26) to lead Webb City performances, and Joseph Dawson and Dustin McLallen were close behind in eighth and ninth, respectively.

"I was really proud of the boys' effort," Miller said. "We ran extremely tough, because some of our injuries and sickness we've had, the boys team has a little doubt right now. Today they came out to try to squash that ... to a fault, maybe a little too aggressive early and that cost us late. We didn't finish near as high as we should have, but the effort was there. We're starting to string together workouts, and it's all about the postseason for us."

"Colin Emmert has only gotten stronger throughout," Walnofer said. "From last year to this year, it's amazing how much he's improved. Logan Carnes was my No. 2, but he slipped on the bridge and hurt his hip. He also finished. I'm glad that they toughed it out. Those are some hard situations to put them through, and they mentally got through it.

"It's a tough course. My kids aren't used to as many hills on a course, but I thought we did really well for what has been going on with all the quarantining and kids being out. For a while I had five athletes out at a time, so it's been kind of rough. This is one of those courses that shows the kids where they're at. You have to be mentally tough. I think we'll build off this for the rest of the season."