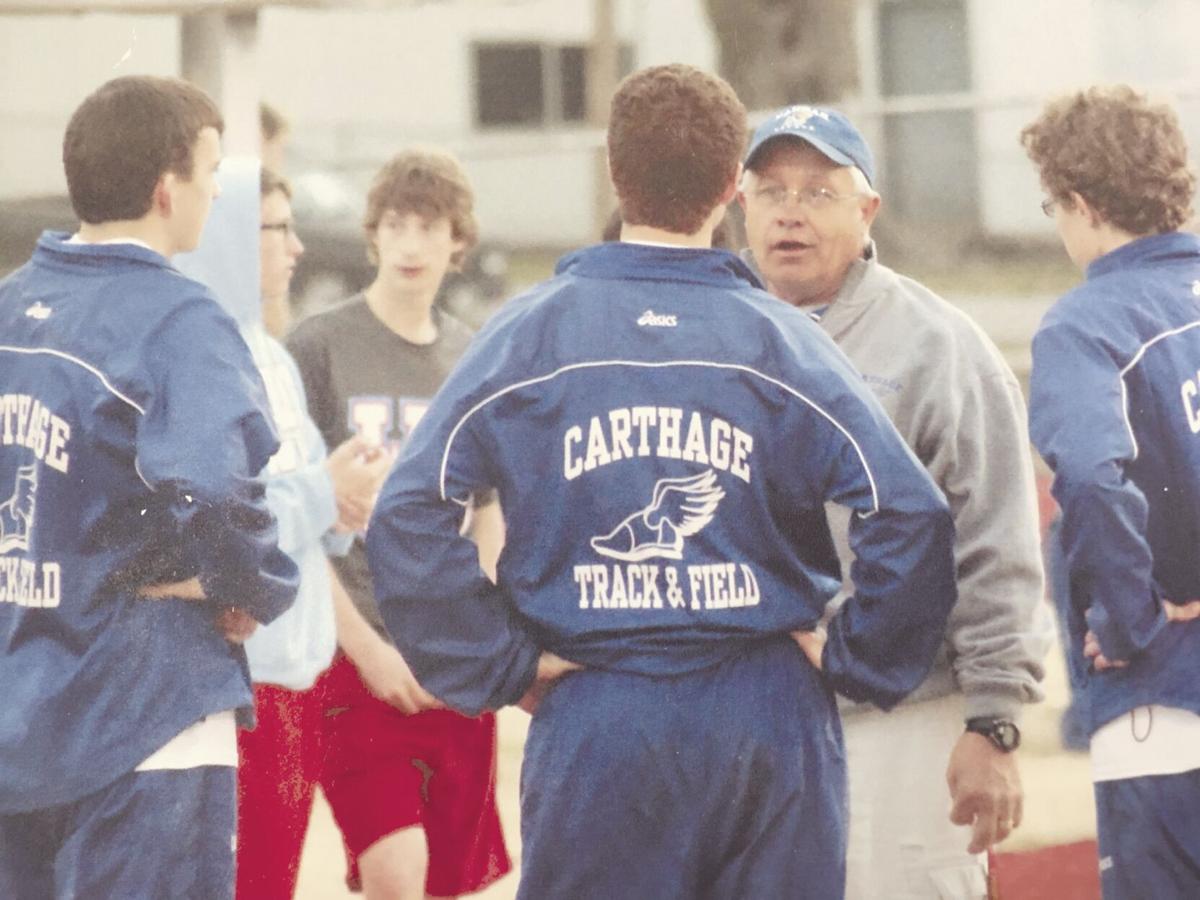 Carthage coach Andy Youngworth talks with Hunter Blount (left), Carter Hensley and Ben Southwick during the 2013 season. Youngworth has resigned at Carthage and will teach and coach next year at McAuley Catholic. COURTESY | ANDY 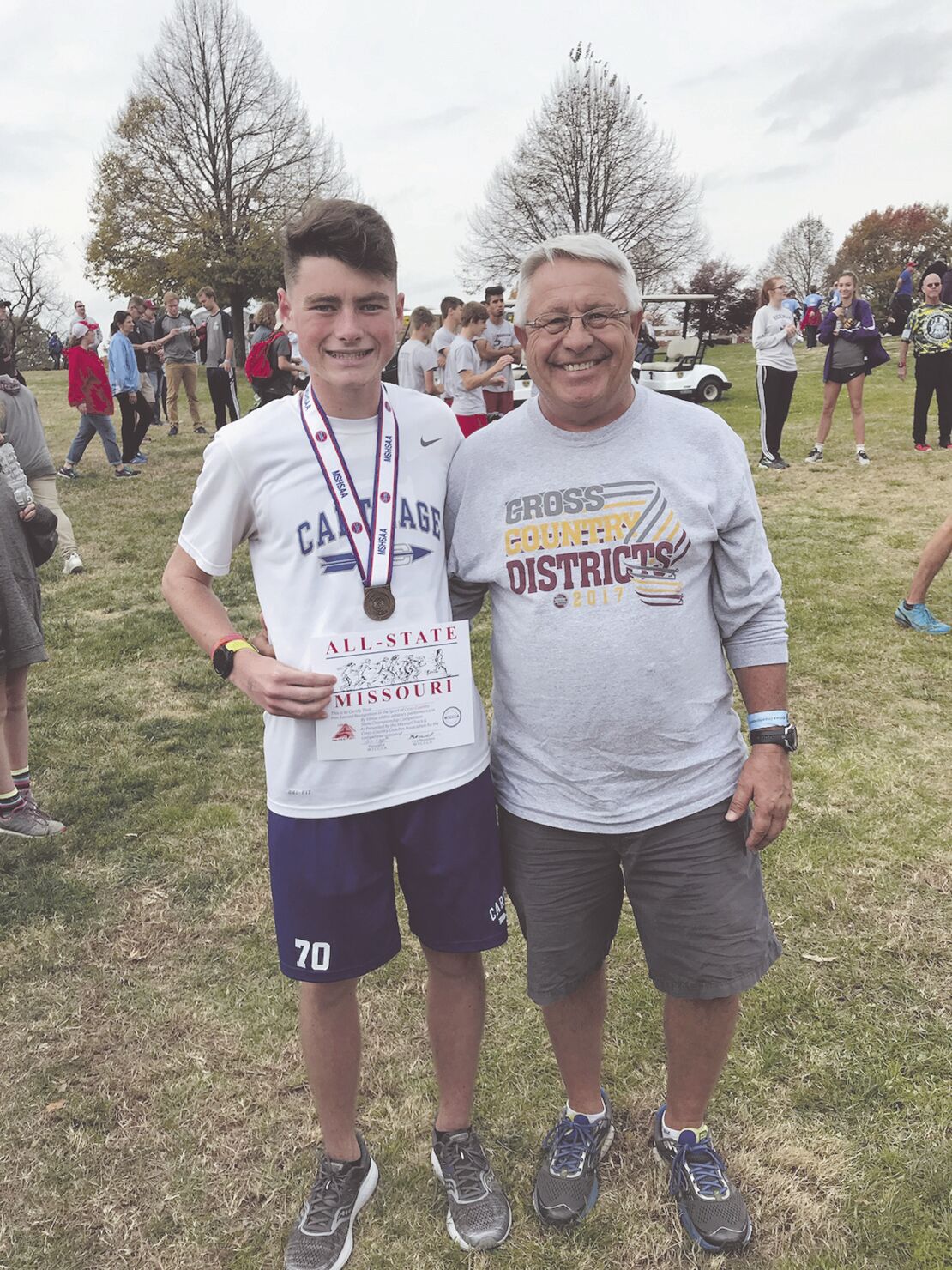 Coach Andy Youngworth poses with Carthage runner Clayton Whitehead at the 2017 MSHSAA Cross Country Championships. Whitehead finished 17th in this race and in second place the next year.coURTESY | ANDY YOUNGWORTH

Carthage coach Andy Youngworth talks with Hunter Blount (left), Carter Hensley and Ben Southwick during the 2013 season. Youngworth has resigned at Carthage and will teach and coach next year at McAuley Catholic. COURTESY | ANDY

Coach Andy Youngworth poses with Carthage runner Clayton Whitehead at the 2017 MSHSAA Cross Country Championships. Whitehead finished 17th in this race and in second place the next year.coURTESY | ANDY YOUNGWORTH

So after 31 years of teaching and coaching cross country and track and field at Carthage, Youngworth has resigned, effective at the end of the school year.

He has been hired as a teacher — primarily social studies — and track and cross country coach with Darby Stancell for next year at McAuley Catholic.

This isn’t the first time that Youngworth has been approached about coming to McAuley.

“I didn’t think much about it then. We had won the state meet in 2018, and I felt I needed to stay. But when everything shut down last year, I was uncertain what my future would be as a teacher at Carthage because I was part-time. ... McAuley wanted me full time. It fits perfect with what I can do, teach and coach next year.”

Youngworth already has connections with McAuley. He was the announcer at the Warriors’ basketball games this season, and McAuley athletics director Mike Howard is a Carthage graduate and played on one of Youngworth’s freshman football teams back in the day.

“In the first seven years I coached and taught, all were in private schools — an Indian school in South Dakota, military academy, Catholic schools,” said Youngworth, who graduated from what is now St. Thomas Aquinas High School in Overland Park, Kansas.”

Youngworth said he was happy working at Springfield Catholic High School, but primarily one person led to his departure for Carthage.

“I loved Springfield Catholic, still might be there,” he said. “But I was so blown away by Ed Streich (former Carthage track coach) and Carthage High School. I’ve been there a long time, and I still owe everything to Coach Ed Streich and Patty Vavra. I had two amazing coaches to work for. I never anticipated being a head coach. I wanted to coach with Coach Streich. He was a great motivator.

“We’ve had three cross country coaches (at Carthage) in almost 50 years — Carl Lewton in the 1970s, then Patty from him, then me from her. We’ve had two track coaches since 1980 for the girls, since 1983 for the boys. That’s a pretty neat deal.

“This was not an easy decision. I love Carthage. I’ve had three daughters graduate from there. I can’t say enough about all the people I worked with there. The relationships with the kids has been awesome. I try to get in touch with as many as I can when they run in college or get married. and the relationships I’ve had with my assistant coaches ... you hire good people and you get out of their way. I’ve had great assistant coaches to work with. That’s been a key.”

Three of Youngworth’s assistants have been named to succeed him as head coach — Brian Crigger in cross country, Nicole Sipes in girls track and field and Logan Wilson in boys track and field.

“When I turned in my resignation letter, I encouraged all three of them to apply,” Youngworth said. “Once I leave, they will make it their own program. We have a great facility, a great tradition. What’s best for the program is to turn it over to people who are in the building and are full time.”